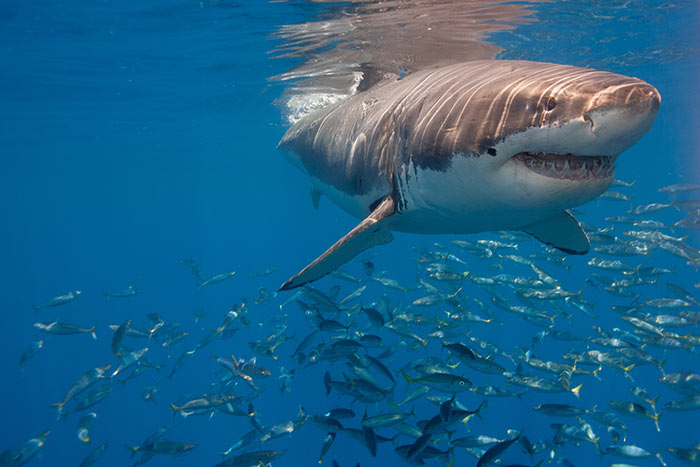 It’s the one word you never want to hear in the water. With rows of teeth, two beady eyes and one iconic fin, the shark has become the scariest, most intriguing fish in the sea. Last Year’s Shark Week drew 42 million viewers, so what makes these marine monsters so fascinating? And are they monsters at all, or is calling them man-eaters a major misunderstanding?

This year, Discovery Channel is moving everyone’s favorite week of TV up by more than a month. Shark Week will kick off Sunday, July 5 and satisfy the nation’s cravings for all things shark-y through July 12. The network has promised sequels to Air Jaws and Great White Serial Killer as well as plenty of new footage and images of shark behaviors uncovered using cutting edge technology.

Shark Week is one of the nation’s most highly anticipated television events each year. Unfortunately, while Shark Week is rooted in appreciation for sharks and showcases incredible discoveries, the media’s representation of these animals is also reigniting old misconceptions.

Remember a little film called Jaws? The book-to-movie adaptation premiered in 1975 and caused widespread fear of massive, man-eating sharks stalking beaches and boats. After realizing the impact of the film adaptation of his book, Jaws author Peter Benchley dedicated many years of his life to shark conservation until his passing in 2006. He knew the effects on the public, originating the terrifying, man-eating shark trope and sparking so much trophy fishing that the shark population dipped dangerously low.

Shark Week’s shows have become increasingly focused on high-flying sharks in midair, crazed over catching a sea lion. Or interviewing the survivors of aggressive attacks about the gruesome nature of their injuries. And while these things do happen, they aren’t the norm for sharks. The International Shark Attack File states the chances of being killed by a shark are 1 in 3.8 million.

George Burgess is director of the Florida Program for Shark Research through the Florida Museum of Natural History and is the curator of the International Shark Attack  File (ISAF), which investigates shark attacks all over the world. He’s passionate about debunking shark stereotypes and presenting a more realistic image of these incredible sea creatures rather than the killer shark image used in mass media representations.

“Oftentimes they’ll have pseudoscientists on these programs who are not really involved through academic institutions,” George explains. “They’re out there doing what they call science, but it’s more like a circus sideshow, like getting a shark to jump chasing a neoprene seal. It’s no more natural behavior than jumping through a hoop at SeaWorld. You get misinformation, whether accidental or overt, and you get what they purport to be science. Scientists who study sharks are turned off by Shark Week entirely.”

Most Shark Week shows are created by independent film companies and sent back to Discovery. Those companies often use George as an expert source.

“The IFC produces the product and sends it to the home office where they look at it and will often send it back and say ‘we need more gore’ or ‘we need a sexier title.’ I get involved when the original film company wants to keep it honest and closer to the so-called truth,” he says. At the end of the day, George says it’s all about redirecting our attention to matters of fact.

“Sharks will always be a story, no matter how many times the scientific community says poo-poo on you, because people are excited and want to learn about them. All we can do is bring the discussion back to the center and put some words of reason in there.” 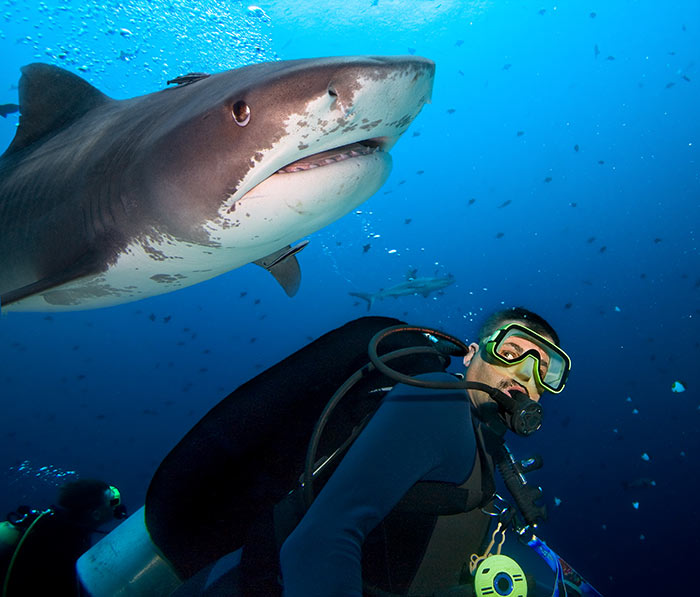 In 2014, ISAF investigated 130 shark attack allegations and found that only 72 of them were unprovoked. They often visit the scene and conduct long-distance interviews to learn everything possible about the incident.

“We are interested in what’s going on from the perspective of the shark and the human since it’s a two-way encounter,” says George. “We want to know environmental conditions, what were the people wearing, how many people were in the area, what were they doing, biological and abiological factors all come into play. Of course, not all shark attacks are shark attacks. Sometimes people use it as an out to explain poor human behavior. Other times, the shark does the biting on a human after dying from some other cause, like drowning.”

Exploring the nature of unprovoked attacks are the priority for George and his team, as these provide the most insight about how to avoid negative interactions with sharks in the future. 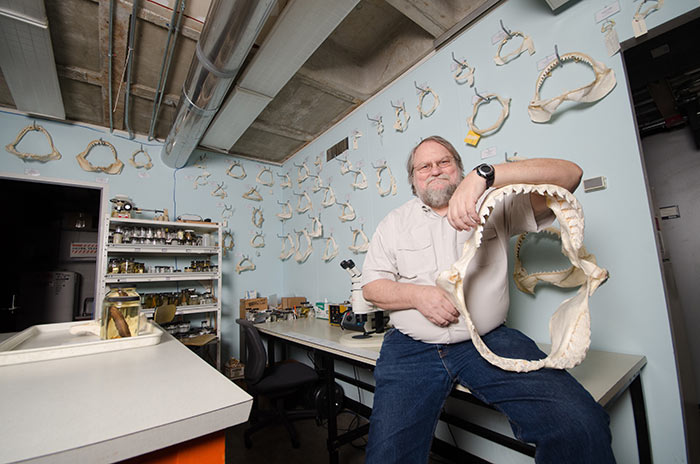 Florida waters are full of swimmers and divers, especially in the summer months as residents and tourists alike flock to the beaches. This influx of people means a significant increase in shark sightings.

“Volusia County leads the state in numbers of attacks and year in and year out is always the leader. Brevard County is rapidly trying to catch up. Not surprisingly that’s a reflection of the growth of the I-4 corridor which opens up the East Coast beaches, which draw more people,” says George. “More people means more opportunities to encounter a shark.”

What kind of sharks might we see cruising our coasts? Some common sharks inhabiting the waters around our fair state include…

In recent years, it seems like GreatWhite sharks are appearing more frequently in the Gulf of Mexico, but George says this isn’t because they’re cruising for snacks along the beaches.

“Human population is the ultimate mover and shaker in the relationship, but White shark populations are on the rise. This is because of two factors: one is that they’re now a protected species, so they can be caught but the killing of White sharks is illegal. Even more importantly, the things that White sharks like to eat the most have all been protected by the Marine Mammal Protection Act since the 1970s.”

It’s easy to say sharks are misunderstood when you’re not in the water being circled by one, but in most cases, it’s the truth. Experts say sharks don’t even like the taste of humans and bites are almost always a case of mistaken identity. But should you find yourself near this apex predator, here are some signs it’s exhibiting actual aggression:

Rushing or charging you

Brushing its belly on the bottom

Swimming with quick up and down movements

Swimming in a fast zigzag path

While there are only about 75 shark attacks each year, you can help your chances even further by following these guidelines:

3  Try not to enter the water during dawn, dusk or nighttime when sharks are more active and harder to see. Also avoid waters where fisherman are using bait or there are schools of baitfish present. If you see seabirds diving in for the fish, you’ll know they’re around.

4  Keep splashing to a minimum, and keep pets on shore. The helter skelter movements can resemble those of an injured or distressed fish, a sign of easy prey.

Chances are you will never be attacked by a shark, but it can never hurt to know some aquatic self-defense. Here’s how to get yourself out of the jaws of a hungry sea beast:

1  Stay calm (easier said than done, but do try) and keep the shark in sight. Some like to use surprise attacks from behind or below to catch their prey.

2  Try to minimize your vulnerability. If you can dive to cover in a reef or are in shallower water and can plant your feet, do this so the shark has fewer sides to attack from.

3  Use hard objects (like a camera or a rock, if you can find one) to strike the shark’s snout, gills or eyes. If you don’t have any, make fists or use hard points on the body like your heels and elbows. Remember, don’t try to wind up a Superman punch at this won’t give you extra force underwater. Claw and strike repeatedly at these weak spots to appear as a threat to the shark until it swims away.

Did you know baby sharks are born with full sets of teeth? Watch your toes!

Sharks can smell blood at one part per million in the surrounding ocean water. Depending on certain factors (like speed and direction of the water current) this range can span for hundreds of meters away.

Not all sharks have to swim in order to breathe. Some can use a pumping motion in their pharynx to get air moving through their respiratory systems so they can snooze on the sea floor.

Some sharks lay eggs while others, like Great Whites, give birth to live pups. For White sharks, the average number is two to 10 pups at a time, and they are 4.4 to 5 feet in length when born.

OCEARCH is a non-profit organization dedicated to public safety and gathering previously unknown data about sharks by attaching trackers to their fins and recording their behaviors, then displaying them in near real-time using their Global Shark Tracker.

Each shark gets a name with its tracker, and its location and swimming patterns are displayed on the online shark tracker, at ocearch.org, so you can choose a favorite and follow it around the world. One of the Great Whites, Katharine, was off the coast of Central Florida in January of this year.

The tags, attached to the shark’s fin, ping off of satellites when they near the surface and plot their courses over time. This allows scientists to calculate the distances they travel in a given amount of time, how much they must consume to provide that kind of energy, and much, much more brand-new data.

OCEARCH currently has over 40 studies completed or in the works, and these studies will influence public policies related to public safety as well as safety and conservation for sharks. And don’t worry shark lovers, there is no evidence to suggest the tags cause any damage to the sharks or their fins.

Keep up with your favorite sharks at facebook.com/OCEARCH.

On July 11 and 12, ocean enthusiasts and prominent researchers alike will all be raising awareness for conservation at the Florida Aquarium’s second Shark Con at the Florida Fairgrounds in Tampa. There will be animal encounters, a mobile exhibit from Mote Marine Laboratory, exhibits from local vendors and a whole roster of professional speakers. Tickets are available at shark-con.com at $14.95 for one day or $29.90 for both days.

Because two shark-infested natural disasters weren’t enough, Sharknado 3: Oh Hell No! is set to premiere on SyFy on July 22. It stars Tara Reid and Cassie Scerbo reprising their roles from the previous films and will also feature David Hasselhoff, Ryan Newman, Jerry Springer, Ann Coulter and even Mark Cuban. This satirical take on the horror sci-fi genre is guaranteed to be three times as ridiculous as the original, so be sure to tune in.