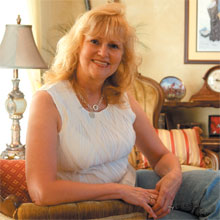 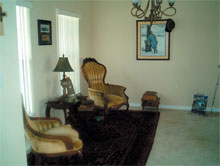 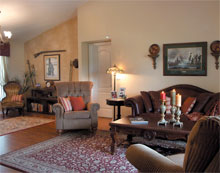 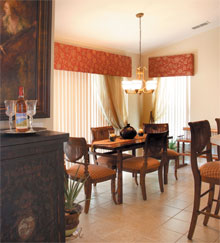 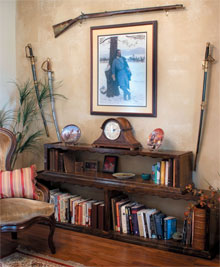 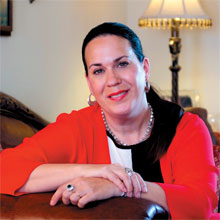 Cyndi Henderson’s living room had all the elements of a perfect gathering space. The area boasted an open view into the kitchen with an ample sitting area on the other side. Unfortunately, none of the spaces connected well, resulting in a jumbled mix of his-and-her furniture and collections belonging to Cyndi and her husband Tommy.

To help the Hendersons with their design dilemma, interior decorator Gretchen Wolf-Yahnig created a functional transformation that satisfied the room’s multiple uses.

First, Gretchen focused on the sitting area which included an eclectic collection of Victorian-era furniture along with Tommy’s extensive Civil War memorabilia. Gretchen re-arranged the space by drawing attention to Tommy’s prized possessions with customized bookshelves displayed on a newly-painted wall.

“I’m merely an interpreter to bring everything together,” says Gretchen, “and I wanted to meet Cyndi’s design needs and still pay homage to Tommy’s impressive Civil War collection.”

A new wood floor enhanced Gretchen’s goal for design fluidity to allow a seamless connection between Tommy’s historic vignette and the living room. Since the room serves many functions including entertaining, watching television, and playing with the Henderson’s grandchildren, Gretchen knew she had to make everything flow.

“I like to mix angles with curves and squares on furniture to balance everything,” she says.

And Gretchen did a wonderful job achieving this task. A beautiful walnut serpentine-front credenza commands center stage as the media center that stands out in front of the subtle faux-painted wall. Sage green sheers soften the window with a near-by side table that also doubles as a bar. Tommy joined in on the design project and created the window treatments’ finishing touch by building cornices upholstered in a warm- cinnabar-colored damask fabric.

A wool rug also brings color to the room, centered by a traditional, yet comfortable sofa and chairs. Cyndi wanted to make sure the room remained family-friendly for the grandchildren, so Gretchen’s curve-inspired furniture insures no scrapes or bruises for the little ones.

To complete the room’s design objectives, checkered fabric in reds and greens flank the kitchen table and chairs, which also serve as the home’s primary eating area.

Pleased with the end result, Gretchen says this was “one of the most fun projects” in which she’s been involved.

The Hendersons agree as they survey their new and improved surroundings.

“I absolutely love it,” says Cyndi, “Gretchen added so much color and flair to all the spaces.”

“Since I’m a history buff, I collect all sorts of things and Gretchen gave me enough room to display them,” he says.

Saved from an awkward flow, the Henderson’s living space is now a functional and elegant setting for gatherings of many kinds.

“Accessories like lamps, books, and pictures add the finishing touches that make a room come alive.”