Get familiar with the world’s most maligned predator. 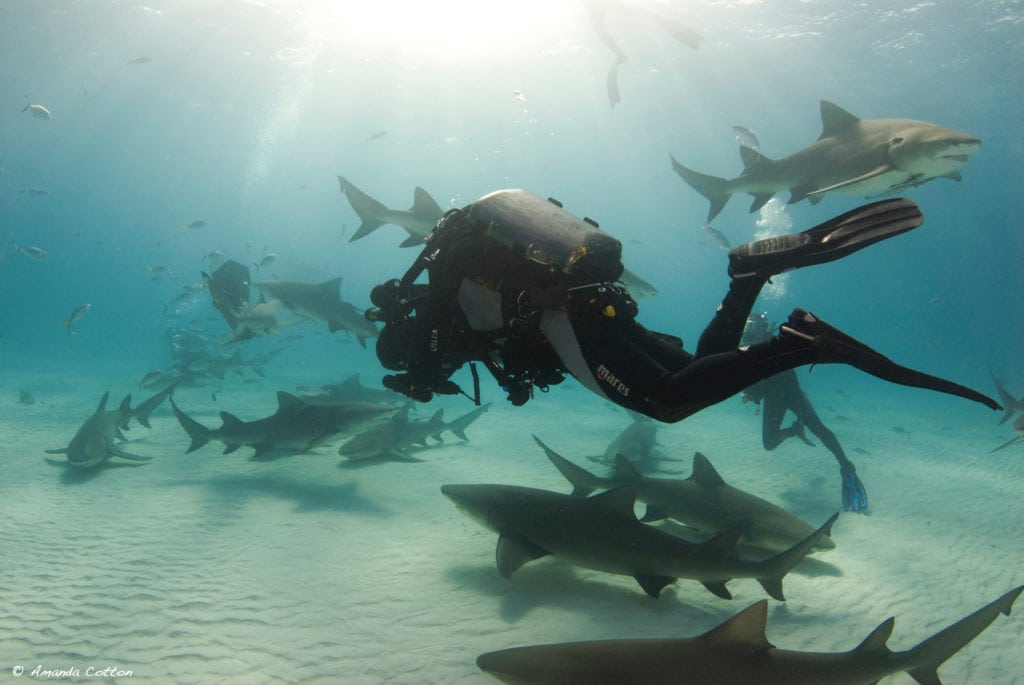 If you’ve based everything you think you know about sharks on Discovery Channel’s Shark Week, you’re in for a surprise.

Granted, there is plenty of factual information in the popular summer television programming of all things shark related, but elements of drama are used to keep people tuned in. Let’s face it: Watching a bunch of lemon sharks calmly swimming around divers isn’t nearly as ratings-inducing as a massive great white, toothy mouth wide open, ramming a cage with a diver inside.

So, what is the truth about sharks? For starters, it’s that man is the ultimate predator.

The fact is that an estimated 100 million sharks are killed annually. The International Union for Conservation of Nature reports that one-third of open ocean sharks are threatened or near-threatened with extinction due to over-fishing. Sharks are especially vulnerable to over-fishing because they’re slow growing and slow to reproduce.

As the ocean’s apex predators, sharks fulfill a vital role serving as a crucial balance in that ecosystem. What affects the primary predators has an impact, whether direct or indirect, on all the lesser species.

Each year many sharks—as well as other fish, sea turtles, whales and porpoises—are unintentionally killed by commercial fishing operations targeting other species. Sharks are also purposely killed due to “finning,” the cruel, centuries-old practice of cutting every fin off live sharks and tossing them back into the ocean to die a slow, suffocating death.

Countless sharks are also killed so their livers and cartilage can be used in human and animal supplements. And then there are the commercial shark fishing operations that take paying customers out to catch sharks simply for a trophy.

These “hunting” outings always focus on the biggest and best, which is the exact opposite of the sharks they’re targeting. In nature, predators—and that includes sharks—always go after the sick, injured, dying and young.

Interestingly, Peter Benchley, author of the 1970s best-seller Jaws, which of course, was made into a mega-hit movie that portrayed sharks as vicious man hunters, spent the last years of his life fighting for shark conservation.

Getting Real About Sharks

The United States holds the distinction of having the most shark attacks of any country, with most occurring in Florida—Volusia County, to be exact.

But let’s look at real numbers. On average, only five people in the world die from shark attacks annually. To put this in perspective, the Centers for Disease Control and Prevention (CDC) reports that cows kill an average of 20 people per year (typically in farm-related activities), while an average 20,000 people die from snake bites each year.

“The majority of people sell sharks short. They’re not ferocious ‘eating machines’ with an instinct to kill; they just want to live and survive,” observes Marion County resident David Ulloa, whose rapport with sharks has earned him the moniker of “Shark Whisperer.”

Ulloa has had horses for most of his life, and ironically, that connection led him to develop a greater understanding of sharks. In the late 1990s, he was introduced to Parelli Natural Horsemanship, which teaches people time-honored skills that enable effective communication utilizing the horse’s psychological perspective and body language. Just as Parelli Natural Horsemanship helps humans see things from the horse’s point of view, Ulloa hopes to enlighten more people about the shark’s perspective. 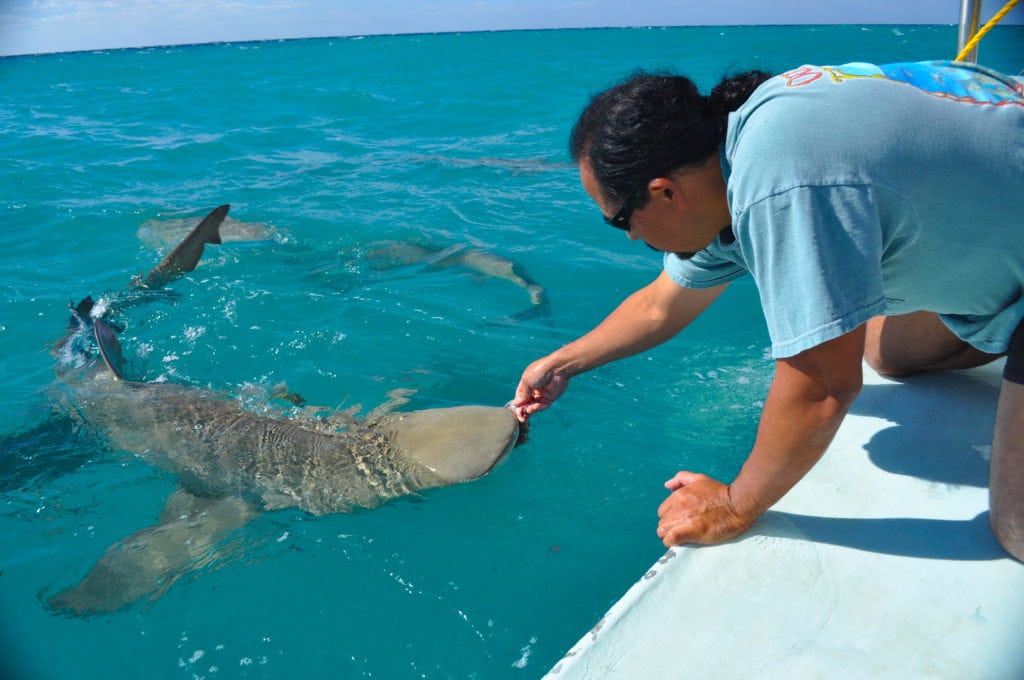 Ulloa’s nickname as the “Shark Whisperer” began after a working dive showed him just how fine-tuned sharks can be when it comes to nuanced communication.

In 2007, Ulloa and crew were diving a shipwreck off the Outer Banks of North Carolina, shooting the pilot for a TV series. The sunken WWII tanker was resting on the ocean floor 250 feet down and was teeming with sharks.

“There were literally 200 sharks around that day, mostly sand tigers,” relates Ulloa.

After much effort and swimming against the current, no less, he was finally in position to get a much-anticipated shot when he realized one of the biggest females—at least 12 feet long—was about to swim in front of him, which would have ruined the shot. Instinctively, to redirect her, Ulloa used a technique he’d employed with horses for years.

“I looked straight at her and sent my visual and mental energy directly toward her head, and she immediately turned away,” says Ulloa. “Then she circled back and looked at me, as if asking, ‘Did you just talk to me?’ After the shot, I invited a relationship by mirroring her actions, and she responded by swimming nearby the rest of the dive.”

He’d communicated with a shark. And she understood. It was a life-changing experience.

From then on whenever he was diving with sharks, Ulloa used body language, energy and intent to communicate.

To this day, Ulloa relies on the same methodology he uses with horses: first think and visualize what you want the animal to do, and then “speak” the animal’s language to help them understand what you’re asking for.

“Every time I want to try something new with a shark, I’ll try it with my horses first. They’ve taught me everything I need to know about relationships,” says Ulloa, adding that he still has his buddy, Zipper, the horse he learned natural horsemanship with and who’s almost 30 years old.

What to Do and Not Do

There are more than 500 species of sharks in the world, but the following are some of the most common found in Florida waters:

If there’s one myth David wants to dispel it’s that sharks are eating machines that feed on humans. If that were the case, there would be far more people killed by these misunderstood predators.

“There are so many dangerous things in the water; sharks are probably the least of what is going to hurt you,” says Ulloa, noting that an encounter with the box jellyfish can easily kill a human because the sting of this tiny creature quickly paralyzes its victims.

The vast majority of people who are bitten by a shark aren’t killed—even though the animal certainly had the capability to do so. This reinforces the oft-stated assertion that the vast majority of shark attacks on humans are that of mistaken identity. The shark attacks thinking the person might be a seal or other type of prey and then calls off the attack after the first bite reveals this wasn’t the case.

Ulloa notes that many shark bites may also be as simple as plain curiosity. A shark uses the resource most readily available to check out something it isn’t sure of, and this resource happens to be its mouth. Because of an abundance of sharp teeth, even an exploratory nibble can cause significant damage, especially if it’s a large shark.

In the case of a person bitten while standing in shallow water off the beach, Ulloa says this can easily happen when small prey fish are fleeing from a shark and trying to hide. For the fish, survival might mean dashing into a group of people frolicking in the surf. For one of those unlucky people, the result might be an unintentional bite from the pursuing shark.

At the moment of “attack,” the shark cannot see because its nictitating membrane lowers to help protect the eye.

“Basically, the shark opens its mouth and creates suction to suck that fish in,” says Ulloa.

As Ulloa points out, the majority of people will never encounter a shark. But how should you react if you’re one of the minority who does?

Be aware. Most people are painfully lacking in basic awareness of their surroundings. You may be in the water to have fun, but you’re entering the shark’s world, so pay attention.

Don’t act like a prey animal. This is easier said than done as humans are typically awkward in the water. Just know that splashing, thrashing and abrupt movements are exactly how a weakened or wounded fish or marine animal acts, and this can attract predators.

Establish a boundary. If you do see a shark coming close, “shoo” it away by sending your energy in its direction and then retreating a short distance the instant it moves away.

Follow your gut. This is something Ulloa always tells the members of his dive team. If that gut feeling tells you to get out of the water, don’t ignore it. Ulloa has ended dives abruptly for that very reason and heeding that gut feeling has kept his team safe on more than one occasion.

“My experiences of being with sharks are the opposite of what you see on ‘Shark Week,’” says Ulloa. “My fundamental mission is to highlight the plight of the most graceful, intelligent and magnificent of all ocean creatures—the shark—and to propose solutions toward their protection and conservation.”