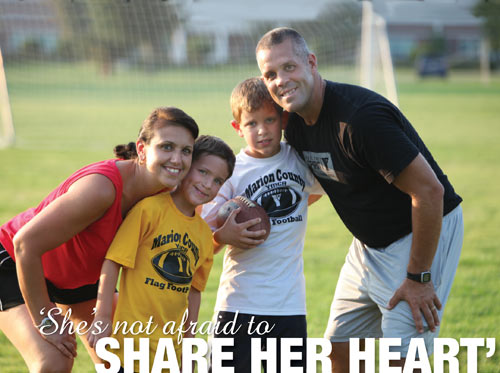 It started out as just another Saturday morning for Angela Mitchell. She was in the shower when she felt something unusual on her left breast.

“I knew it was cancer,” Angela says.

It was March 2003, and Angela was 33 weeks pregnant with her second son, Joshua. After a whirlwind of doctor’s visits, Angela found out the tumor was malignant and immediately had it removed, but her ordeal wasn’t over. After a lot of prayer, her faith placed her in the hands of the YMCA, where she had been a member since 2001.

At the time Angela was part of The Mermaids, the women’s water aerobics team. She had formed a close bond with the ladies, a bond that was only strengthened by the support she received following her diagnosis.

“The list is endless of all the things the ladies here did for us,” she says.

Through it all, Angela knew the YMCA provided a comfort she couldn’t find anywhere else. It was a safe place where her family was protected from judgment.

Angela distinctly remembers getting into the pool one day after chemotherapy had stripped her of her hair. Instead of being self-conscious, she felt comfortable in front of her teammates and the wellness center’s other members.

“There are not many places where you can do that,” she says.

“She’s not afraid to share her heart with people,” adds Priscilla Jones, a YMCA group exercise instructor and personal trainer. “She’s such a real person.”

An active member in many of the YMCA’s programs, Angela led the Christian organization’s first Bible study titled “Do You Think I’m Beautiful.” The study compared beauty in God’s eyes with the beauty that’s often defined by modern media. Angela also serves on the YMCA’s Missions Committee and was division leader for 2008, where she helped maintain the Christian aspect of the YMCA.

Angela was also the 2009 Scholarship Chair, working for a program that is near and dear to her family, who are scholarship recipients.

With a degree in social work and a minor in ministry education from
Anderson University, Angela has always had a knack for helping others—allowing her faith to lead her path in life.

“I believe so strongly that God has chosen the Y for me to minister,” she says. “I don’t know why this is my place, but it’s where I was chosen.”

To the members and staff of the YMCA, however, it is clear why this is Angela’s place—the YMCA, because of all of its unique programs and supportive people, is so much more than just a gym.