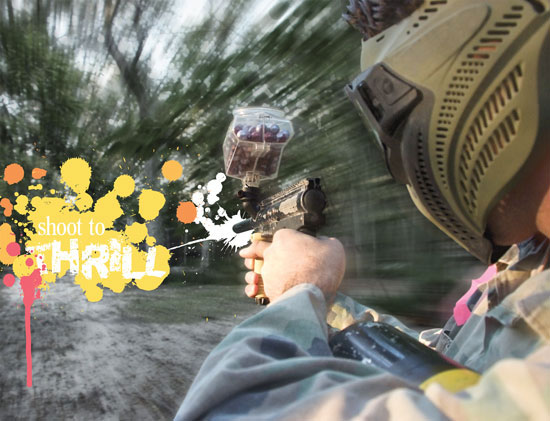 Count me among the 10 million-plus who’ve joined the ranks of paintball players. So when I had the opportunity to play and write about a recent adventure with the Lake & Sumter Style crew at Wayne’s World of Paintball, I jumped on it. My co-workers never knew what hit ‘em!

There’s barely an hour of daylight left and the temperature is dropping rapidly. Long shadows angle across the buildings sprawled before me and the handful of abandoned cars to my right. I scan the scene carefully, searching for any signs of movement, determined not to be taken by surprise.

Ducking low, I scramble up to the second story of the building in front of me. Crouched behind the wooden wall, I’m seriously trying to breathe evenly, but it’s not working. I’m panting and my heart is thudding. My finger is poised on the trigger. The enemy is out there and I’m ready.

Slowly, steadily, I ease to a standing position and position the barrel of my gun to the edge of the window. There! Below and off to the left, someone is scurrying for cover. I fire off half a dozen rounds, catching the unfriendly before he makes it to safety.

“I’m hit!” he shouts. Peeking out the window again, I watch him make his way off the field, gun raised over his head. I can’t help it. I’m grinning. 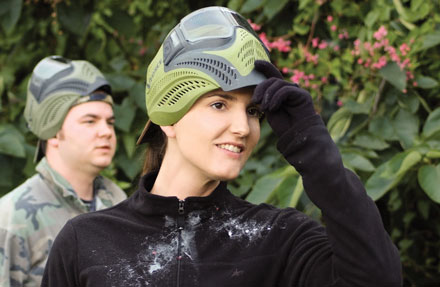 Cynthia Brown takes a breather after being shot in the throat.

ACCORDING TO THE RULES of engagement, a player is out of the game if he or she is hit by a paintball that breaks on impact, visibly marking them or their equipment. A player can also be asked to surrender if an opposing player comes within 10 to 20 feet. If the player refuses, the challenging player may fire. Since paintballs can be painful at close range, it’s considered good sportsmanship to give an opponent the chance to surrender. Games can last from five minutes to 30 minutes, but serious players often engage in much longer competition, including 24-hour scenario games.

Paintball requires a few basic pieces of equipment: a face
mask, a paintball gun (also commonly called a “marker”), and paintballs. Most guns operate using CO2 cartridges, but serious players often use compressed air tanks (similar to a scuba tank), which allow them to play longer
without refueling.

While hardcore players can spend hundreds and even
thousands on equipment and games, Wayne’s World
of Paintball rents the basics for just $17, plus paint. If
you have your own equipment, admission is just $7.

Rental equipment includes a face mask and goggles, a
fanny pack to carry extra paintballs, a semi-automatic
paintball gun, air fills for the day, and referees, who
are on hand to enforce safety and game rules.
Paintballs start at $5 for 100 balls, and, trust me, this
meager amount will not be enough once you start
playing. At a minimum, you’ll want to go with the one-
quarter case of 500 balls for $24.

“Being in a battle scenario like this
really gave me a deeper respect
for the men and women in
our armed forces,” says J Fugate.

WAYNE AND JACKIE DOLLACK have owned and operated Wayne’s World of Paintball since 1996. Prior to that they managed Survival Zone from 1985 through 1995. An avid player, Wayne indulged in his hobby every weekend for years and is actually credited with originating the first lengthy one-scenario game around 1984. This was followed by night play games and then 24-hour games.

Hobby players aren’t the only ones to challenge each other at the 68-acre site. As Wayne points out, SWAT team members, the U.S. Secret Service, and ATF agents have all used Wayne’s World as a practice location to hone their skills, as have Marion County Sheriff’s deputies and the Ocala Police Department.

PAINTBALLS WERE FIRST CREATED in the 1950s for use by the U. S. Forest Service to mark trees from a distance. Cattle ranchers used the same pistols to shoot paintballs to mark cattle in the field.

The first “official” paintball game was played by 12 players in New Hampshire in June 1981, with the same type of pistols and paintballs used by the forest service and cattlemen. These 12 players later devised basic rules for the game they called “Survival.” Thanks to an article in Sports Illustrated, the game attracted national interest and, by 1983, had taken on a life of its own.

Ocala resident Carl Lenz was introduced to paintball 15 years ago and has been playing regularly ever since. He’s a member of Team Warhounds, which plays nearly a dozen 24-hour scenario games across the state of Florida each year.

“You really form brotherhoods and friendships that are life-long,” says Carl, who routinely plays with a former Marine sniper. “The bulk of my friends are all from paintball.”

As a long-time player, Lenz has invested his share in the sport, but emphasizes that big bucks are not required.

“Like any sport, you can go crazy and spend a lot—there are $2,000 and $3,000 guns out there—but the gun doesn’t make the player,” he says. “And where else can you hunt someone legally and not get in trouble?”

“The sheer enjoyment of pelting my
co-workers with paint was very cathartic.
We should do this every month!”
says Craig Gillum.

FOR THE LAKE & SUMTER STYLE paintball outing, referees Henry “Lumpus” Fleming and Ryan “Freak” Williams explained the rules and kept us in check during the games. With strict adherence to safety rules, such as never removing goggles on the field of play or shooting at close range, paintball isn’t any more dangerous than other competitive sports. In fact, insurance statistics reveal that paintball is safer than tennis.

“As with the go-kart experience of this past summer, I was once again amazed at the competitiveness of my co-workers,” notes Editor-In-Chief Dean Blinkhorn. “Once we donned our camouflage gear, received our real-looking paint guns, and were briefed by the paintball staff, the Lake & Sumter Style crew took to the mock village like well-trained special-ops forces.

“I work out often, usually riding up to 100 miles a week on my road bike,” he continues, “but nothing prepared me for the strenuous exercise of the paintball experience. For two days, my hamstrings burned from all the duck-and cover maneuvers and quick-burst sprints across the open field.”

BUT GUYS WEREN’T THE ONLY ONES fired up about the paintball adventure.

Graphic Designer Kim Gaucher-Vogt had also never played paintball before, but found it more exciting than she anticipated.

“It was nerve racking, with mixed feelings of power and vulnerability,” she says. “It actually made me feel like I was really in some guerilla skirmish.”

It was nearly dark as our group finally left the field, exhilarated and pleasantly tired. I can easily see how a day or afternoon of paintball would make for a great birthday party or corporate outing. I’m already trying to decide how I can fit this into my hectic schedule on a regular basis.

PaintBall By The Numbers

87 countries where paintball is played

350 amount, in dollars, for an equipment starter pack

10 million number of players in the U.S.

(Click below on art for direct link to waynes-world.com)