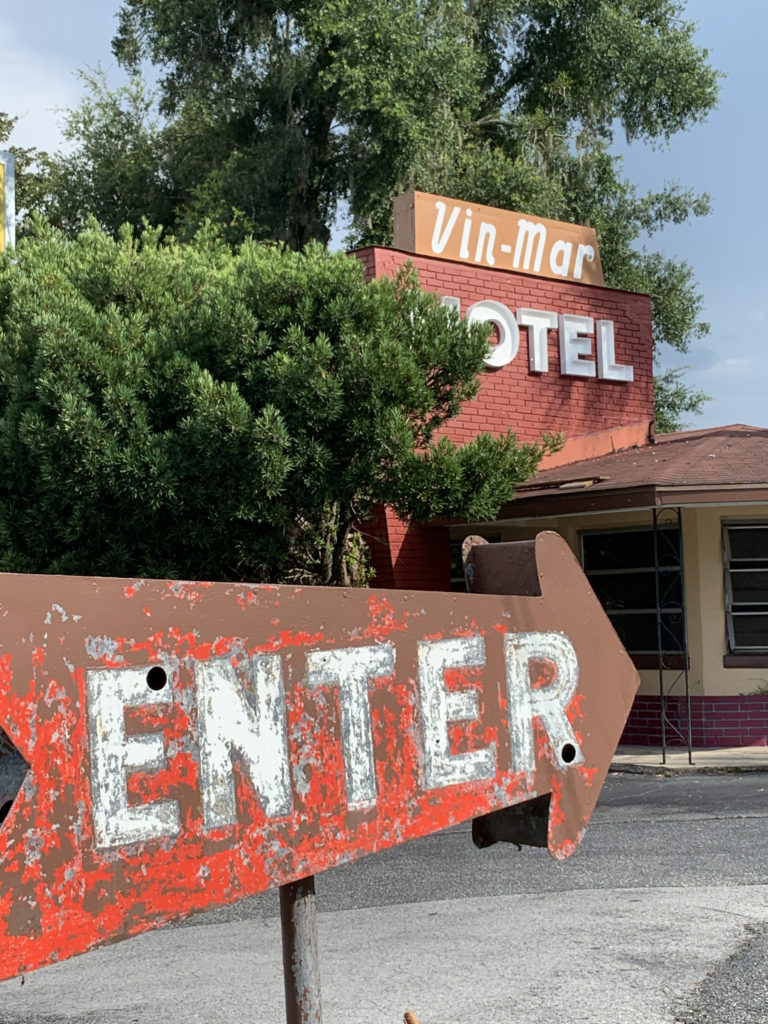 They’ve survived hurricanes and tornadoes, constant exposure to the blistering Florida sun and the ravages of time. Some harken back to a golden age of tourism and some have cropped up more recently—a vibrant part of our shared culture that call out, Look at me! Notice me!

They speak to the uniqueness of Florida’s eccentric roadside history and the creativity behind our small businesses. They stand out proudly against the sea of sameness that has invaded communities around the world with identical retail signage and uniform corporate graphics. They represent our local owners and have a distinctiveness that distinguishes us from the next town down the road.

You may not be familiar with the Dixie Highway or its significance to our region, but over one-hundred years ago it was one of the nation’s first interstate highway systems with almost 50 of its 6,000 miles running right through Marion County. Most of that route is now known as U.S. Route 441, however there are still some remaining portions of the old road. The purpose of the route was to deliver potential new residents, businesses and travelers to the county. While not every town that the route passed through experienced that sort of growth, Ocala, Belleview and many other local towns did. 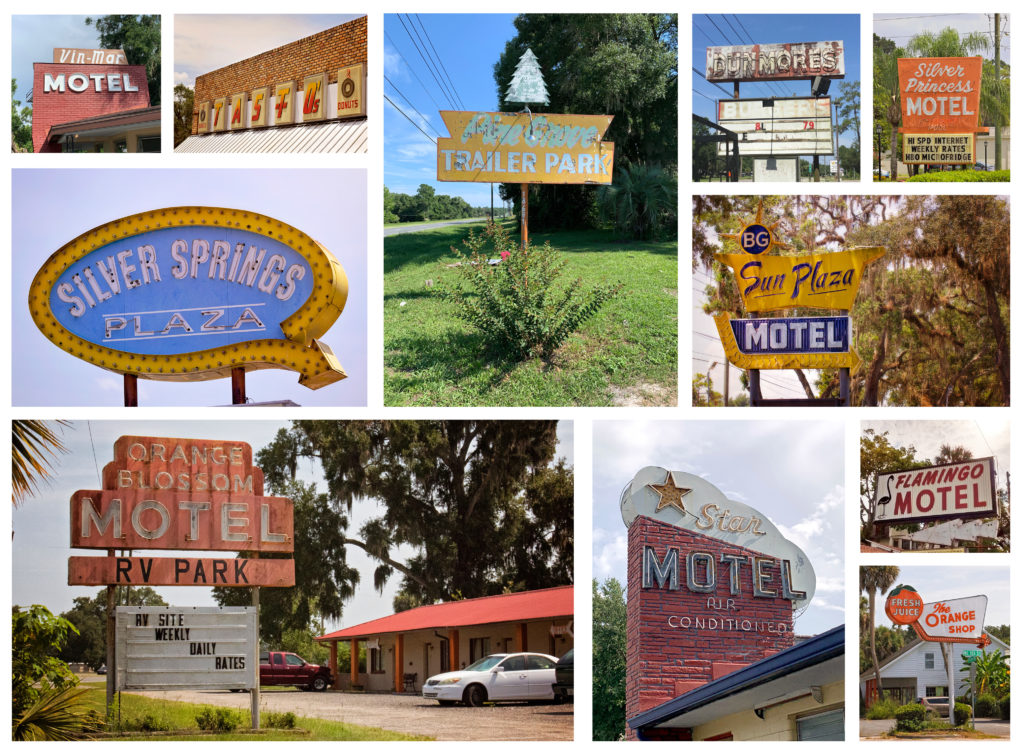 “It began as an experiment by the auto industry pioneers and their Progressive Era allies in the Good Roads Movement, a loose confederation of individuals and organizations committed to improving the nation’s roadways.” explained author Tammy Ingram, in her book Dixie Highway, Road Building and the Making of the Modern South, 1900-1930. “It was made up of hundreds of short, rough, local roads, put together in a continuous route that looped nearly 6,000 miles from Lake Michigan to Miami Beach and back again.”

The route not only encouraged communities to build better roads, it made them part of a network that opened up the state of Florida up for tourism. By the mid-1900s, mentions of the route through Marion County were published in many popular travel guides. By 1915, the Marion County section of the Dixie Highway began at Evinston and ran through many local towns, including McIntosh, Orange Lake, Ocala, Belleview, Ocklawaha, and Weirsdale, before it made its way into Lake County. During the decades that followed, as we barreled headlong into the golden age of automobiles and people took to the open roads in search of adventure, the impact on the growth of roadside business growth was immense.

By the 1950s, Americans were obsessed with modernism and the space age. With no ordinances or restrictions to stop them, local business owners dreamed up futuristic, unabashedly optimistic signs that were like beacons to weary travelers and exciting new hotspots for locals. The most exciting among them were those punctuated with luminous glowing neon writing, lighting up the night sky in a brilliant show of color.

The Vin Mar Motel in Belleview was one of those area motels that drew tourists like moths to a flame. “I can’t tell you how many people used to stop to ask about the sign,” Tevis Fitzpatrick, who owned and operated the motel for 30 years with her husband Peter recalls. “People just love that sign.”

The name is also a source of curiosity for visitors. “It was named for the previous owners, Vince and Mary,” Fitzpatrick reveals. “They used part of his name and part of hers.”

Romantic, yes…but the sign lasted much longer than their marriage.

Many famed actors, including Lloyd Bridges who filmed the television show SeaHunt in the area, stayed at the Sun Plaza Motel in Silver Springs. Divers and enthusiasts still flock there when visiting the springs. 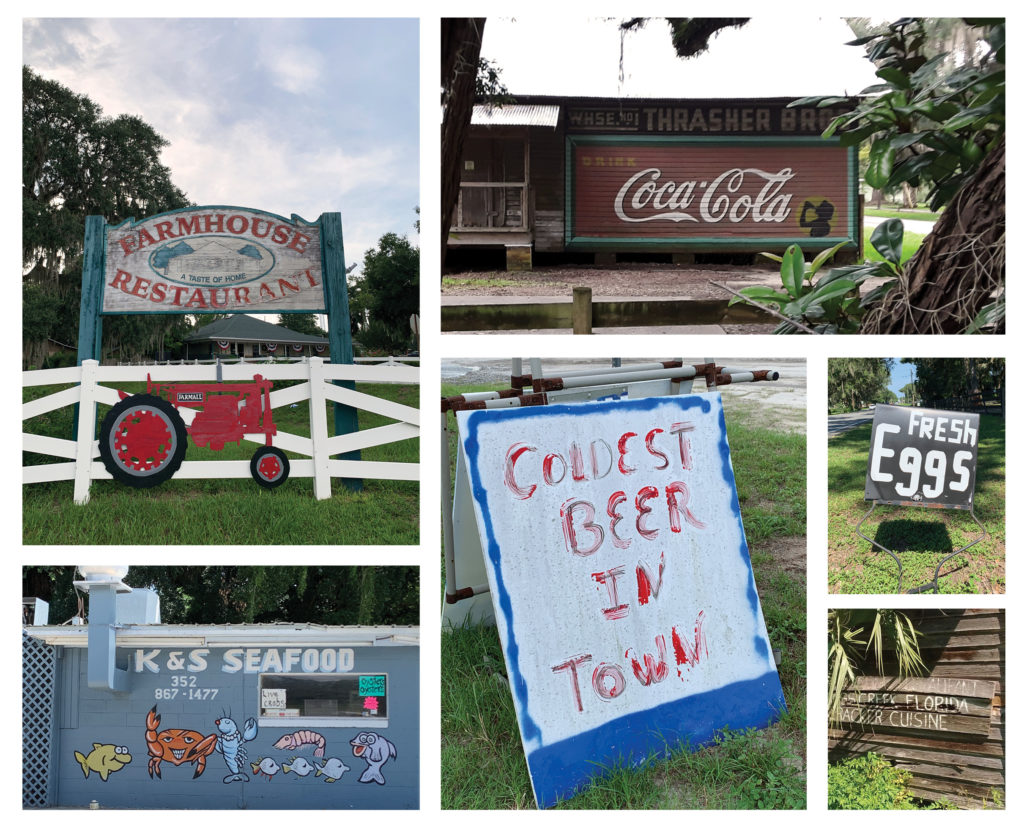 We couldn’t cover the town and not give a nod to the country spirit and artistry of the hand-painted sign. We love a great farm stand sign and is there anything better than the promise of farm fresh eggs?

One of the most vibrant and instantly instagrammable signs around is the Coca-Cola advertisement painted on the side of the Thrasher Warehouse Building No. 1 in the charming town of Micanopy. The mural was painted freehand, using only a string guideline, in the early 1930s, by a Mr. Burke from Jacksonville. When it had faded into what enthusiasts commonly call a “ghost sign” a decision was made to have it restored. In 2011, local artist and restoration expert Tom Thomas of Fine Line Architectural Detailing brought the sign back to its former glory. The warehouse is now the home of the Micanopy Historical Society Museum.

At the Farmhouse Restaurant in Belleview, Sun Hollett has been packing in patrons hungry for her homemade biscuits and gravy since it opened in 1996.  “She’s here every morning at 3:30am cooking.” says Hollett’s boyfriend Jack Stephan, who painted the tongue-in-cheek “Country Cooking, Lousy Service” signs that decorate the front porch. He also created the tractor sign which hangs below the restaurant’s original hand-painted sign that promises a taste of home. “What makes the restaurant so popular?” he continues. “Good food. Lots of good food.”

Owners Kenneth and Sharon Wilkerson adorned the exterior wall of K&S Seafood in Ocala with a group of quirky cartoon characters when they opened in 1995. “We had this idea for these funny little animation-style fish that would attract people to the restaurant and market,” Sharon recalls. “It just made sense since our business is seafood.”

K&S is both a fresh fish market and a restaurant where you can choose your meal from the market and then have it cooked to order. They’re also famous for their home- baked pies and cakes.

Annie’s Full Moon Saloon in Belleview has a sign that boasts the coldest beer in town and although we haven’t done any official tests, we get a chuckle every time we pass it.