Call it progress. Call it change. Call it what you will, but nothing on this earth stays the same.

For lovers of all things “old Florida,” the news that Silver Springs, “nature’s theme park” attraction, was closing its doors and becoming a state park brought mixed feelings. Some felt this would make the grounds more accessible for people to enjoy. Others lamented the fact that the animal exhibits and jungle tours that once characterized the theme park would be done away with.

As the state’s oldest tourist attraction, the site indeed has a rich history and has been a mainstay in Ocala. Unfortunately, “old” was also an apt description of many of the structures and facilities. It was time for a change.

It was announced that the theme park would close permanently and the state of Florida would take over the facility. On October 1, 2013, the gates to the familiar venue once again opened to the public, but this time as Silver Springs State Park. 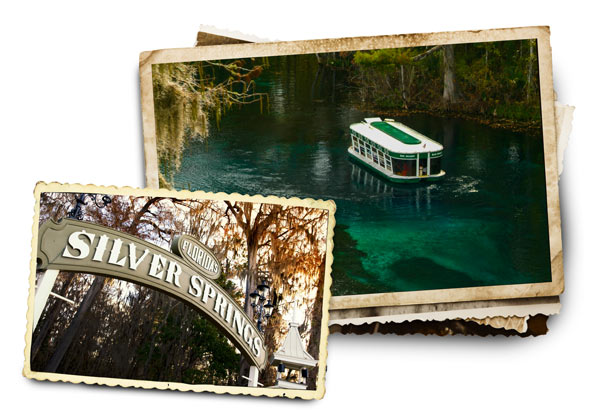 A Bit Of History

It’s only fitting that such a setting would attract visitors. Tourists, however, were hardly the first to appreciate the unspoiled environment and 99.8 percent pure artesian spring waters.

Timucuan indians settled around the springs in the early 1500s, but they weren’t the first to reside there. Habitation in the springs area actually dates back 15,000 years, if not longer. The Timucuans, however, are credited with referring to the area as “Ocali,” which is where our town got its name. Their peaceful inhabitation was upset by the invasion of Spanish explorers led by Hernando de Soto in 1539. These Native Americans fought fiercely for their land and were eventually able to reclaim it; they were succeeded over the years by other native peoples, including the Seminoles.

Fast forward to the 1850s when progress brought barges laden with lumber, cotton and other goods up the Silver River to area settlements. Steamboats followed a short time later, and it wasn’t long before tourists, intrigued by word of the sparkling clear waters, began journeying there for sightseeing and vacations. Many of these guests stayed at a 200-room hotel built near the main spring in 1881.

The waters had been pristine for centuries, but this fact especially resonated with visitors once they got a better look beneath the surface, thanks to the famous glass bottom boats, which debuted in 1878. The first vessel was nothing more than a dugout canoe featuring a glass box on its flat bottom, but this simple invention opened an enchanting underwater world to patrons willing to spend a few cents for a tour of the springs.

Commercial glass bottom boats were introduced in the 1890s and continued to be improved upon through the decades. By 1909, boats were equipped with canopies to shade the tourists and cushions to offer more comfortable seating. In 1925, gasoline engines were added, only to be replaced by electric motors in 1932.

It was Tooey who was responsible for introducing the original group of wild rhesus monkeys in hopes of creating a more “jungle-like” atmosphere for his cruises. Tooey figured tourists would appreciate monkey sightings but failed to realize the primates were talented swimmers. They quickly spread beyond the island where he first established a colony, and soon, monkeys were found living in various troops up and down the river.

The area’s scenic beauty also caught the attention of movie producers. Starting in 1916, the silent movie The Seven Swans was shot at the park. It was also the location for six of the original Tarzan movies between 1932 and 1942. Television shows and commercials soon followed, with the latest commercial being filmed there as recently as 2005.

Change In The Winds

The land around the headwaters of the Silver River changed hands eight times from 1860 to 1993, when Florida Leisure Acquisition Corporation sold the property to the state of Florida but arranged for a long-term management lease. That lease would be held by several different entities until the last of these, Palace Entertainment, acquired the lease in 2002. In early 2013, Palace Entertainment worked with the state, agreeing to an early end of the lease.

The state of Florida took over the 242-acre theme park it had purchased two decades earlier, merging it with the adjacent Silver River State Park. On October 1, 2013, the combined properties—now known as Silver Springs State Park and comprising nearly 5,000 total acres—formally opened to visitors.

Several million dollars’ worth of renovations were made in the past year, including removal of old structures, restoration of buildings and repair to the park’s entrance walkway and boardwalk overlooking the  main springs.

“There are additional picnic areas with new tables and a public canoe and kayak launch as well as a vendor to rent from. We’ve been restoring the glass bottom boats, too,” says Nicky Aiken, assistant park manager. “Not all of the renovations have been completed; some are still  in progress.”

Buildings were painted, and non-native plants and shrubbery were removed, as the goal is to bring the area back to a natural setting.

Speaking of removal, also gone are the zoo-like enclosures where animals such as bears, Florida panthers, alligators and more were once housed and exhibited.

“We do not keep captive animals; Homosassa Springs State Park does that,” explains Aiken. “We have some animals we keep for educational purposes; these include a couple of snakes that are used for programs. People love the animal programs that the rangers give.

Visitors can no longer go on a Jeep Safari tour, but there are plenty of other options, which enable guests to experience “real” Florida up close and personal.

These are the springs after all, so water itself is a main attraction, and there are several ways to enjoy it. Those glass bottom boats (they’re named in honor of the Native American leaders who fought for their lands in Florida) take tours out on the Silver River several times a day. Veteran captains who worked for the theme park still pilot the boats, dispensing interesting facts and information about the area during the tours.

If you prefer to explore the waterways under your own power, you can do so by canoe, kayak and paddle board. Discovery Kayak Tours is the on-site vendor offering rentals.

Both the state and county have spent millions on “spring restoration” projects, including the removal of nitrates that have affected water clarity and purity. Swimming is not allowed in the springs.

“Boaters are not allowed to get out of their boats, from the spring or river near the spring head,” notes Christine Garrett, park service specialist. “We do have a launch in the park on the spring side that people can put in from and take out from if they come in through the park, but if they are coming from other areas up or down river, there is not an area to get out of their vessels. They need to enter the park to use the launch and our designated picnic areas that are located throughout the park and are accessible from land only.”

The scenic gardens and walkways are open for exploration; you can walk or ride bikes along miles of designated trails. At this point, it’s  “bring your own” when it comes to bikes, but bike rentals may be available in the future.

Trails in the lower section of the park that was the Silver River State Park are now separate, but plans call for a connecting trail to be established, expanding the trail system across the entire park.

“Dogs are allowed in Florida state parks, and a lot of people like to come here and walk their dogs,” says Aiken. Dogs must be vaccinated, well-behaved and on a leash at all times. They can’t be left unattended  and aren’t allowed on boats, inside buildings or at after-hours events, such as concerts.

“The park is also a great location for birders,” she adds. “As we remove exotic and invasive plants and replace them with native plants, you’ll find more wildlife, like butterflies and birds, coming in.”

In addition to biking and hiking the park’s extensive trail system, horseback riders can take advantage of the park, as well. Horse owners are required to have current negative Coggins certificates for all horses entering the park.

“Right now the equestrian trail is separate and has its own entrance off Highway 40,” Aiken notes. “There is also a vendor who rents horses for guided rides.”

One popular aspect of the theme park was Twin Oaks Mansion, the concert venue. As of press time, the structure was still under renovation for a complete “facelift,” but it will debut this winter as a new calendar of musical performers are scheduled to appear.

The park’s natural beauty makes a perfect setting for special events. Outdoor spaces, pavilions and rooms will be available to rent for activities such as weddings, reunions and receptions. Aiken says the park even hopes to have a wedding planner on board.

Camping and cabin rentals make the park even more friendly to visitors wishing to stay overnight or longer. In addition to the full facility campground with 52 sites for RVs/tents (camping fee of $24.00 per night, plus tax, includes water and electric), there are 10 luxury cabins and a primitive campground, which can be used by organized groups such as Boy and Girl Scouts, church groups, etc.

The Silver River Museum and Environmental Education Center and pioneer cracker village are also open to the public but with different hours from the main park. These areas of the park are open for touring on weekends and holidays only from 9am to 5pm, and there is a $2 additional admission fee for the museum.

If you haven’t yet visited your “new” park, this is the perfect time to plan an outing. After all, now that the old theme park has become a state park, it really belongs to all of us. Take advantage of that!

1860: Samuel O. Howse purchased the land surrounding the headwaters of the Silver River. 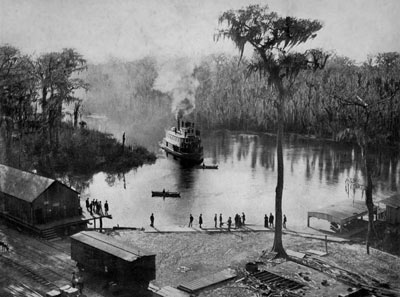 1890: Fire destroyed Bishop’s hotel. He replaced it with a new inn called the Brown House. 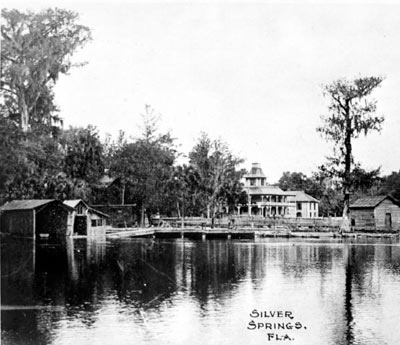 1900: C. (Ed) Carmichael bought 80 acres around the Springs from Anderson for less than $3,000. He improved the comfort of the glass bottom boats by installing cushioned seats and canopies. 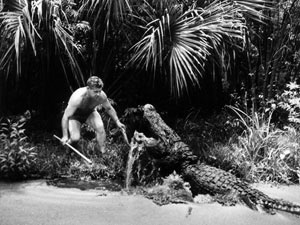 1942: Six of the original Tarzan movies, starring Johnny Weissmuller, were filmed on location at Silver Springs. 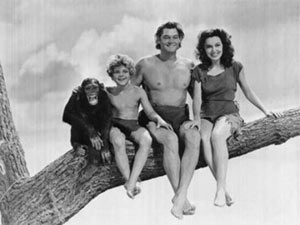 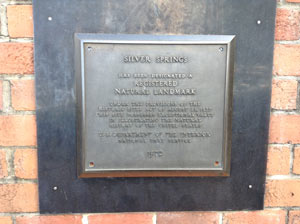 1972: Silver Springs was declared a registered Natural Landmark by the United States Department of the Interior and the National Park Service.

1990: Jeep Safari, a 35-acre jungle safari, opened to the public. This was the first new expansion at Silver Springs in 12 years. 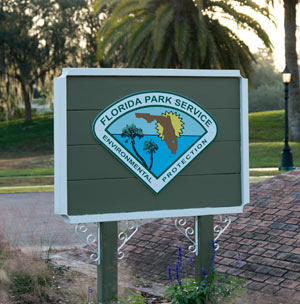