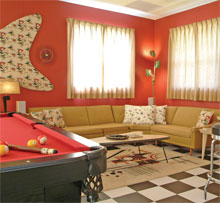 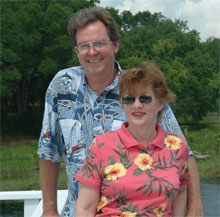 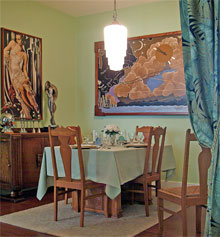 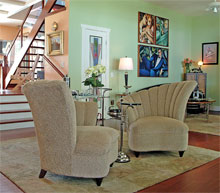 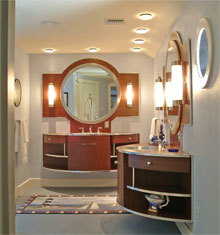 As I took my first step through the front door, I had the unmistakable feeling that I was stepping back in time onto the deck of the USS Normandy, one of the grandest ocean liners ever to sail the high seas. That is, until Linda Harlow reassured me that we were still safe on land.

“That’s the illusion we wanted to give,” Linda says. “The Normandy was the greatest art-deco liner ever built, and we modeled our home after the art-deco style of the ship.”

And to think it all started with a railing Linda found on eBay. That particular railing currently separates the front entryway from the dining area.

“I was just searching eBay and I came across the railing,” Linda says. “I was actually the only person that ever bid on it. I guess nobody else wanted it.”

Well, for Linda and her husband, Albert Sanowskis, that single railing ended up defining the style of the entire house. Its wavy, silver-colored lines are used as recurring motifs throughout the many rooms of the lakefront home.

Once inside the front door (and onto the ship’s deck), my eye was immediately drawn to a large mural of — what else? — the USS Normandy docked in New York Harbor. The mural, hand-painted by Linda over several months, shows the outside of the massive vessel with the towering skyscrapers of New York City in the background. The deep blue colors of the mural certainly adhere to the nautical theme when combined with the mahogany-colored flooring and white deck chairs.

“The chairs are reproductions of the original La-Z-Boy recliner,” Albert explains, “and the floor was done in mahogany because on the famous ocean liners of the art-deco era, the decks would have been done in either teak or mahogany.”

On the floor in the center of the deck is a detailed compass made from high-quality vinyl. It came as a surprise to me to learn that the mahogany floors are also vinyl, a very impressive illusion.

Off the main entryway are two guest “cabins.” Linda and Albert spared no detail when it came to decorating their unique home. Interior door panels are painted in true art-deco style, with pastel colors and geometric and circular shapes.

“The panel designs are similar to what you would find on a 1930s cigarette or make-up case. Of course,” Albert admits, “on a much larger scale.”

“I did all of the murals myself,” Linda adds, “and Albert used his expertise when it came to woodworking and contracting. He made much of the furniture throughout the house.”

The second guest cabin features an exact reproduction of a 1930s bathroom, or “head,” as it’s called on a ship.

“I had a bathroom just like this,” Albert says as he points out the black-and-white tiles, “except our tiles were green. I grew up in a 1929 apartment in Chicago. I’m sure that’s where my love for art-deco style originated.”

Both Albert and Linda have a deep-seated appreciation and interest in the art-deco era, and through their furnishings, reproductions, and impressive collection of vintage antiques, it shows!

Through the guest quarters and back into the entryway, a set of stairs leads to the second-floor captain’s quarters.

The master suite, outfitted in pale blue, deep red, and navy, has a very nautical feel to it. Real portholes from historic ships have been transformed into decorative mirrors. A figurehead of a diving woman is perched at the top of the ceiling and watches over the couple as they sleep.

“If you were on an old ocean liner,” Albert explains, “the sinks in the bathroom would be elliptical to save room. Even the draws swivel open instead of pulling straight out.”

The half-moon sinks and surrounding mahogany vanities are mounted to the wall, giving the illusion of weightlessness. The round mirrors have brushed-chrome frames. The circular shape in the bathroom continues with another porthole.

“This particular porthole is from a World War II battleship,” Albert describes. “My father held onto it for more than fifty years. The glass is three-quarters-of-an-inch thick and bulletproof.”

Don’t ask Albert or Linda if they have a favorite room in their 3,400 square-foot home on Lake Kerr, because they won’t have a definitive answer.

“It depends on my mood,” Albert says.

One room that gets a lot of use is the home’s grand salon, or living room. Three Tamara de Lempicka (perhaps the most famous painter of the art-deco period) reproductions adorn the wall behind the vintage-styled sofa. The Cubist paintings with their deep colors and stoic expressions are a sharp contract to the pale green walls that engulf the room.

As I explored this generous space further, I got the feeling of being in a 1930s-era nightclub. You know, the kind where jazz music ruled, the lights were always dim, and club patrons were dressed to impress.

“Smoking and drinking were considered glamorous around that time period,” Linda says. “So a lot of the accessories and artwork from that era feature those activities.”

Two such examples in their home are the antique smoking stand and the polished English bar cart, complete with neatly arranged Chase barware on display.

“We even use it sometimes,” Albert laughs. “Actually, it’s a lot of fun to have friends over because they always end up wandering around the house looking for something they may not have noticed before.”

The wavy shape from the inspirational hall railing is repeated on the hardware in the kitchen area. But my favorite part of the kitchen was the raised bar area that featured vintage travel stickers from around the world.

“Back in the day when people would travel, they would receive stickers on their hard trunks,” Albert says. “We were able to find a lot of the stickers at antique stores and fairs.”

The bar itself is made from a part of an old bowling alley.

Of course we made some concessions to modern-day conveniences,” Linda admits as she pointed out the stainless steel appliances in the kitchen. While the appliances may be new, the ceiling is a vintage reproduction of a tin ceiling. Light fixtures from the art-deco area grace the ceiling.

“We built a set of cabinets in here most people would have torn out in favor of oak or cherry wood,” Albert says as he points out their light-green Formica cabinets. “Of course, in our home, they work.”

In the adjacent dining room, Linda painted her interpretation of a mural from the grand ballroom of the famous Queen Mary ocean liner. The mural features a map that charted the Queen Mary’s path through the ocean.

For this happy couple, it isn’t about the hunt for the antique or vintage piece that is worth the most money. Do-it-yourselfers at heart, Albert and Linda have definitely added their own personal touches throughout their home.

“It’s about finding what you like and living with it,” Albert says. “You never know what you might come across.”