Their choice of motorcycles may vary. They may ride a Harley, a Road King, or a Ridley, but they all share one common purpose—to enjoy the feeling of freedom, adventure, and the companionship of other women motorcycle riders. Women across the country, in growing numbers, are joining their sisters who ride. Marion County is no exception and is home to three local women’s bike clubs, all branches of national organizations. In the following pages, we introduce you to just a handful of the women who love to feel the wind in their hair. 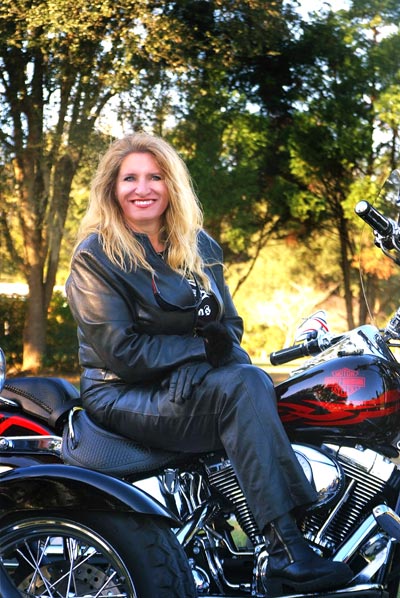 Eileen Barnett, a registered nurse and a supervisor for a local health agency, is the mother of twins—a son and a daughter.

“When the twins came home from college, they asked about the Jet Ski and I told them to look in the garage,” Eileen says. “When they did, they found out that I had sold it for a brand new motorcycle.”

Since taking up riding in 1999, Eileen founded The Chrome Divas, one of Ocala’s lady motorcycle clubs. Today, the club is 30 members strong. Her bike of choice? A 2008 Harley Davidson Softail Deluxe.

One of Eileen’s greatest joys with the club is taking part in fundraising events like Bikers Against Child Abuse, a scenic ride that travels through Lake, Sumter, and Marion counties.

“Leesburg Bike Fest, Daytona Beach Bike Week, Bikes on Parade,” she offers, “we’re lucky to live here because we can get to many great bike events.”

One of Eileen’s fellow clubmates and the assistant director of Ocala’s Chrome Divas is Candace “Candee” Martin. Her Ridley Sport model bike is unique because it’s fully automatic.

“The Ridley is made in Oklahoma City and looks like a custom motorcycle,” Candee says. “It catches everyone’s eye at every bike event we go to. It has a 750cc motor, weighs 460 lbs., is low to the ground, and sounds great.” 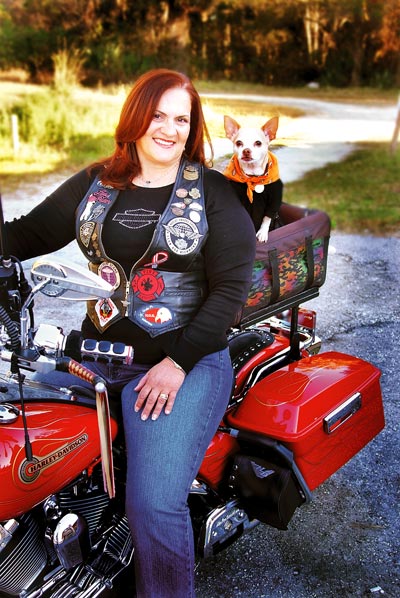 ‘What Better Way To Show My Support?’

Betty “Beatriz” Hernandez may have only been riding for the past four years, but she’s already a very involved member of all three Ocala ladies biker clubs. Her first bike was a Harley Sportster that she soon outgrew for a 2005 Shriner’s Firefighter Special Edition Road King. Her son is a Marion County firefighter.

“What better way to show my support than to buy this type of bike?” she offers. Plus, she loves the red color.

Betty and her husband ride together and love to take long trips. She has a constant companion who also rides with her—her 10-pound Chihuahua, Simba, who rides in his own specially made carrier that fits on the back of her bike. 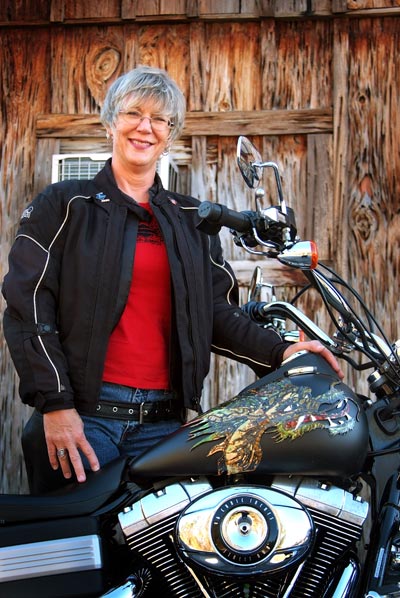 The Freedom Of The Road

Martha Weslow was 52 when she went for her first motorcycle ride. She loved it. She got her motorcycle endorsement for her 53rd birthday and had her first bike six months later.

Two years later, she bought herself a 2007 Harley-Davidson Street Bob.

Martha recently took first place and “best in class” for her motorcycle at the Harley Davidson 105th Celebration at the All Women’s Show. She created a copper glass-on-metal enamelized head of a dragon on her bike.

Martha keeps busy and is an active volunteer for many state rallies. She’s also a talented artist.

“I’m an avid photographer, glass-on-metal enamelist, and work for a custom home builder,” she says.

A proud grandmother to four boys and one girl, Martha says she enjoys the freedom of the road that she finds on her motorcycle and believes women of any age can enjoy the experience. 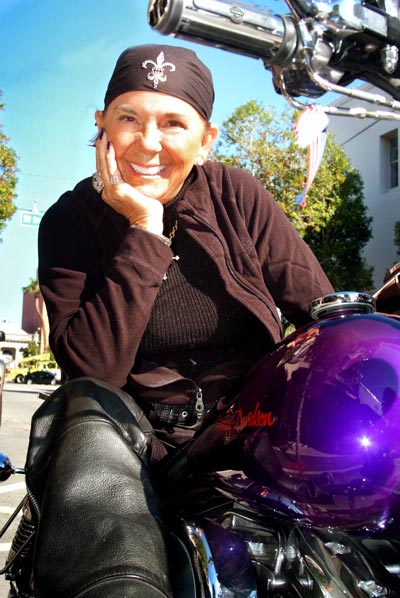 Although her chores at her Quarter Horse farm keep her very busy, Teddy Moore makes time to ride her motorcycle. A rider since 1984, Teddy owns both a Harley-Davidson FXR Low Rider and a Harley-Davidson Road Glide that has been outfitted with two additional rear wheels.

A charitable person at heart, Teddy participated in a ride from California to North Carolina as a fundraiser coordinated by NASCAR race driver Kyle Petty, the son of the legendary Richard Petty.

“It took us only eight days to go cross country,” she says.

“My husband and I rode together until his death,” she says. “We had great experiences.”

Other trips have taken her through Colorado, Wyoming, Oregon, Washington, and British Columbia.

Teddy says that her love of motorcycles must have been passed on to her adult children and particularly her grandson who is seven and rides in motocross.

Nancy Ihasz started riding in 1979. She was the founder of a Women in the Wind Chapter in Tampa 16 years ago. The former owner and publisher of Cycle Scene Magazine, Nancy moved to Ocala in 2002 where she started a chapter of the club that presently has 20 members.

“Women in the Wind strives to educate our members in motorcycle safety and maintenance,” says Nancy. “[We] help women motorcyclists meet friends with common interests, and promote a positive image to the public of women on motorcycles.”

Nancy owns several bikes including a 2002 Honda Gold Wing 1800. Weighing in at a whopping 900 pounds, her bike features a feminine touch—hibiscus flowers have been painted all over it. She also owns two 2000 Sport Tour Honda 1100 touring bikes, saying she believes they are very dependable and require minimal maintenance.

“We invite women to come join us,” Nancy says. “We can help them learn to ride. Often women are more patient instructors, less critical, and we understand where other women are coming from.”

Donna Poole lives in Anthony and rides a 1450cc Road King 2000 that weighs 800 lbs. A member of Ocala Ladies of Harley, Donna’s bike is fully loaded with a trike kit that adds another 350 pounds to the weight. Her bike features customized saddlebags, a windshield, running lights, and a luggage rack.

Donna began riding her own bike in 2006. Up until then she had ridden behind her husband, Jim. Her first bike was a Sportster with the Voyager Trike Kit because it made her feel secure. The kit is composed of two extra wheels that can be bolted on the rear wheel of the motorcycle. Donna calls them “training wheels.” She says she broke her leg a while back and never fully regained her balance, yet she wanted to ride. She was concerned about it until the trike kit made all the difference.

“It allowed me to ride again and feel very safe,” she says.

‘The Largest Get-Together Of Riders’

Kathi Rivenburg started riding the woods and fields of upstate New York in 1972. Back then, she rode her nephew’s Honda 80cc dirt bike. When she tired of the trees and swamp scenery, she decided it was time to “hit the road.”

She had a Honda Dream from the ‘60s in her garage that she began riding every spare minute she had. Kathi’s next bike was a 1972 Honda 350 chopper.

By the time she graduated to her present 1987 Harley-Davidson Low Rider, she’d already been to Sturgis five times and had seen every state except Texas and Alaska. In 2004, she returned to Sturgis with her husband, Ed, for a sixth time.

“The Sturgis Bike Rally is the largest get-together of riders in the country,” she says. “Over 600,000 riders from all over the world come to Sturgis, a town the size of Belleview.” Now Kathi is a Harley girl all the way and is a member of the Ocala Ladies of Harley.

Having found a true passion in motorcycles, Kathi has spent 35 years riding, 24 of those years on Harleys. As a matter of fact, she’s been officially documented by Harley-Davidson as having ridden 200,000 miles.

Ocala Style would like to thank Roger’s BBQ on SR 40 for their valuable assistance.
Posted in Ocala Style Features