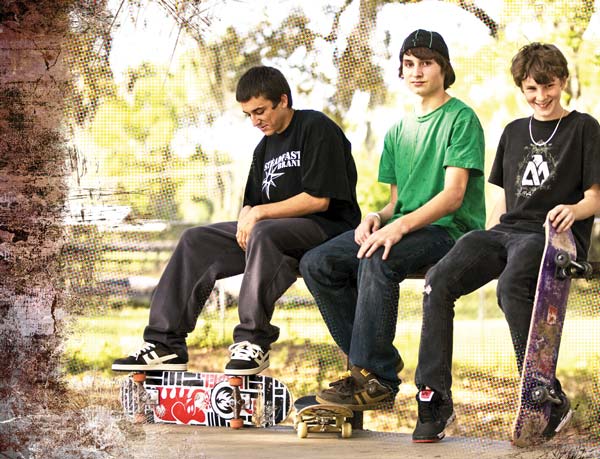 Pictured from L to R are Louis Leib, Danny Lakatos, and Christian Lilholt.
The guys frequent The Park on US 441 in Ocala to share tips and tricks related
to skateboarding.

Like Avril Lavigne sings about in her hit song “Sk8er Boi,” forget everything you previously thought about skaters. Skip the assumptions about the baggy clothes and the attitude. Throw out your preconceived notions that these are kids who hang out and cause trouble. In the following pages, you’ll meet a handful of kids who just might change your impression of what skateboarders are all about. These are the kids from The Park.

Drive south on US 441 in Ocala and just before you hit the sheriff’s substation, a dirt drive leads to a lot filled with old towering oak trees and a chain-link, fenced-in area. The place may not look like much, but that’s okay. The kids that hang out at The Park really don’t need a lot anyway.

On any given afternoon or weekend, there could be six or 30 kids, all trying out new tricks, perfecting old ones, and talking about school and life. They range in age from 10 to over 20. No stress and no real competition exists between them, just the friendly rivalry that makes a skater want to be better. Often, the older kids help their younger counterparts learn a new skill, offering encouragement and advice.

Unfortunately, from time to time, The Park gets a bad rap because it’s a place where teenagers hang out. But the kids don’t fight here, and besides a few swear words every now and then, The Park is good, safe fun. For these kids, skating is everything. 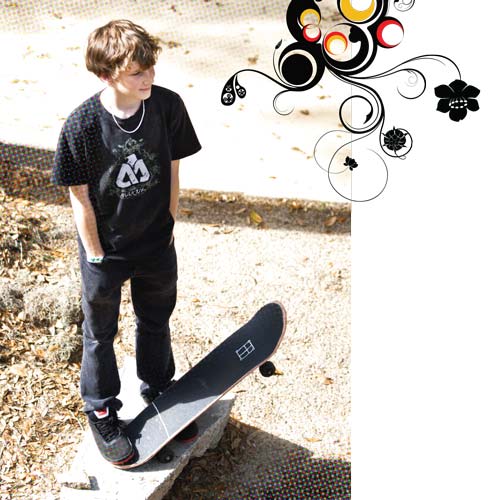 Christian Lilholt, 14, credits other skaters from The Park
for pushing him to become better at skateboarding.

NOT YOUR
‘TYPICAL’
SKATERS

Christian Lilholt, 14, is about as far from the stereotypical skateboarder as you can get. He’s clean-cut, has an impish grin, and is polite to a fault. His passion for skating started, of all places, at a free skate park event sponsored by his youth minister three years ago.

“I was just using the skateboard for transportation, but then my youth minister said we could skate at a skate park for free if we listened to him preach,” Christian says. “I started going every Monday night and just picked it up. When I moved here a year and a half ago, this is the only place you could skate legally, so I just progressed from there.” 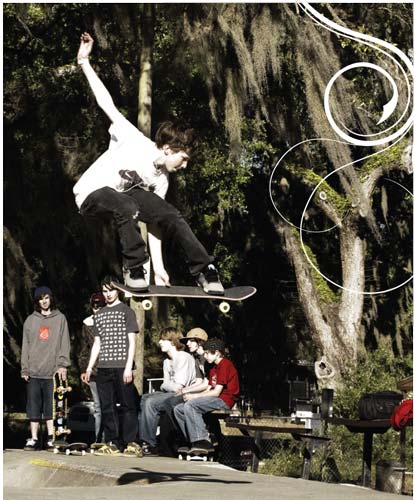 Christian Lilholt performs tricks while practicing at The Park.

And progress he did. Christian says watching the older, more experienced skaters pushed him to try harder tricks and get better.

“Being able to skate with the older people is the best way,” he says. “They’re cool.”

“I asked my mom for a skateboard, and it just kinda took off from there,” he says.

Louis is now reaping the benefits of his hard work over the last five years. He’s in the position that a lot of younger kids aspire to—he’s sponsored by companies (such as Free Rider Extreme Sports, Steadfast Brand, and Against the Odds apparel) that give him equipment and clothing so he can pursue his skateboarding. He travels to competitions in the Southeast whenever his work schedule permits.

Louis says the best part of The Park is its people.

“The guys are laid back,” he says. “Everyone really tries to help each other out.” 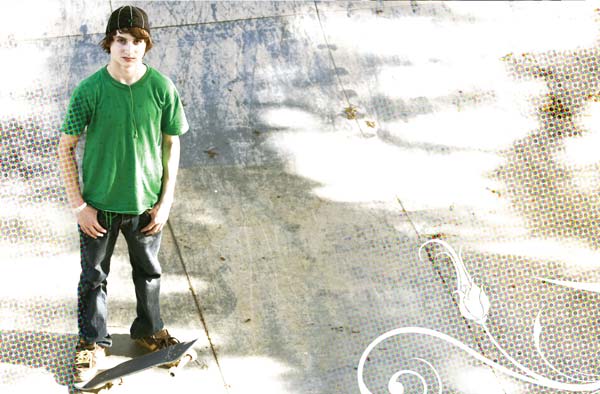 Danny Lakatos goes to the park as often as possible and hopes to become
a sponsored skateboarder in the future.

THE
BROTHERHOOD
OF SKATERS

Danny Lakatos, 14, has been on the receiving and giving end of that help with his fellow skaters. The older guys have shown him how to master the hard tricks, and he tries to help the younger kids learn the basics. He comes to The Park every chance he gets, and after five years, he says skating is still his passion. 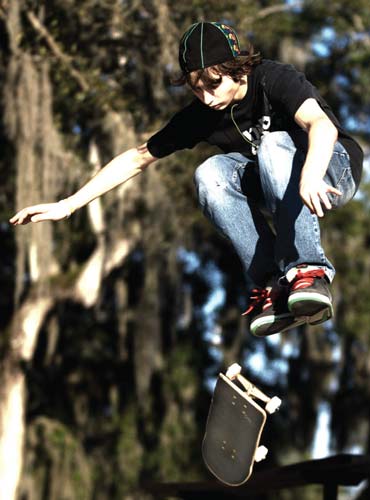 Danny Lakatos practices a trick on a recent afternoon at The Park.

“Of course I want to get sponsored and see how far I can go,” he says. “I do as many contests as I can. The older guys definitely help with learning the harder stuff. They make you want to try more.”

Some of the best skaters, like The Park itself, fly under the radar. Take, for example, Bradley Baldus, 16. He’s one of the most talented skaters at The Park, but he’s also very quiet. He goes about his business, practicing his moves, and hanging back. 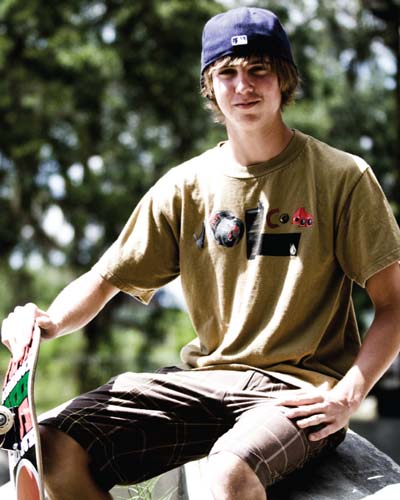 Bradley Baldus, 16, is one of the most talented skaters
at The Park, having first picked up a skateboard when he was 7.
“Some of my best friends come here,” he says.
“They push me to become better.”

Bradley first picked up a skateboard when he was 7. He practices at least three times a week, sometimes at The Park, sometimes at his house. No matter where he practices, he says skating is a release.

“Skating gets me away from everything. It relaxes me,” Bradley admits. “Some of my best friends come here, and they push me to become better.”

Bradley’s life is pretty busy these days. He’s a varsity baseball player and a high honors student with a 3.7 GPA. But he continues to make time for skating, he says, because it’s not just a hobby for him but a serious sport. So, despite his busy schedule, Bradley travels to contests around Florida, hoping to be one of the lucky ones to get sponsored.

Listening to the kids talk about the tricks they’ve learned, the new skill they’re trying to master, and what’s next on their list to accomplish can sound like they’re speaking a foreign language. And in a sense, it is. Kick flips, hard flips, front nose grind, nollie shove, nollie nose blunt, and ollies—this is what they know, what they talk about, and what they live every day. 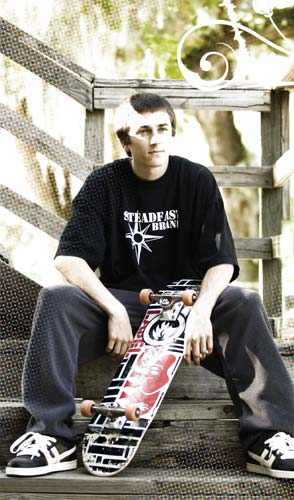 Louis Leib is sponsored by several companies
including Free Rider Extreme Sports,
Steadfast Brand, and Against the Odds apparel.

IN SUPPORT
OF SKATING

It helps that the kids who frequent The Park have supportive parents who understand how important skateboarding is to them, like Christian’s mom, Emmy Lilholt.

“Skateboarding is just in his DNA,” she says. “He eats, sleeps, and drinks it. Since he was 10 he’s had this goal to be a professional skateboarder.”

Emmy, a children’s church minister, dismisses the misconception many have about skateboarding. She doesn’t hesitate at all when she drops her son off at The Park. 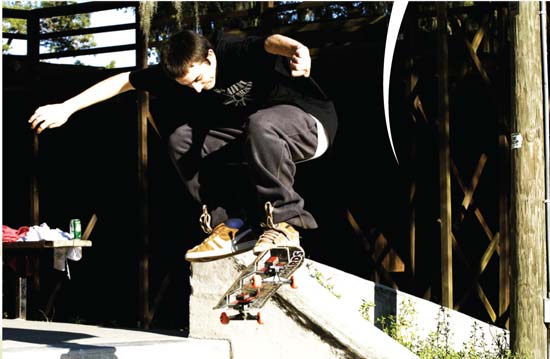 Louis Leib, 19, credits a Tony Hawk skateboarding game
with piquing his interest in the sport.

“This has been a great family atmosphere for him,” Emmy says. “Some of the kids he’s connected with have really good hearts. They have good faith. I’ve watched them protect him as the little guy, and I appreciate that.”

Bradley’s dad, Ken McAteer, is a high school assistant principal and he agrees that The Park needs more community support so that kids like his son and his friends have a place to go.

“There’s a big move toward street skating and that’s where a lot of skateboarders get a bad name,” he says. “But the more places they can skate in one place and be safe, the better.”

Sentiments like that make The Park worth all the trouble for its former owner Kelle Clark. When she started The Park eight years ago, her own boys were younger and needed a place they could skate legally. They’re grown now, but The Park remains for other kids to skate and hang out.

“We saw the need,” Kelle says. “We tried to do this with the city, but we just ended up doing it ourselves. I wanted The Park to be like everyone’s backyard where they can come after school and hang out.”

New owners, Craig and Staci Webb, have since taken over and plan to build on what Clark started, making The Park family-friendly and even bigger and better.

So count on seeing more ollies, kick flips, and nollie nose blunts for years to come from the next generation of skaters heading to The Park.