Seeing a new life begin is not what you’d expect in Leesburg’s Lone Oak Cemetery. Yet every fall, an eagle pair begins nesting and getting ready for its latest arrival. Some say that bald eagles have nested in a large pine tree in the historic cemetery for the past 40 to 50 years.

“It’s an amazing sight,” says Midge Dodge, who has been the Lone Oak caretaker along with her husband for 17 years. “And the eagles have never failed to come back in all the years that I’ve been here.” 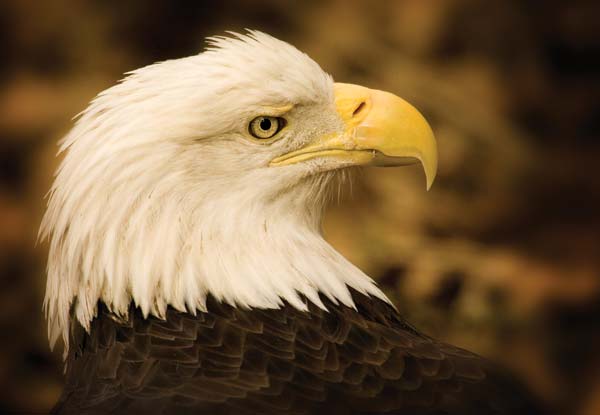 Midge says the male returns first, usually in November. He rebuilds the nest from the previous year, getting it ready for the female’s arrival. The female lays one or two eggs between late November and early February, and hatchings occur after about 35 days. The chicks don’t leave the nest for 10 to 12 weeks, and their presence generates quite a bit of interest. During the months the bald eagles reside at Lone Oak, they are the subject of many photographers and avid bird watchers.

“Photographers come and set up tripods and photograph for hours,” Midge says.

The cemetery does not discourage photographers and bird watchers, but asks that they respect the solace and dignity of the location. 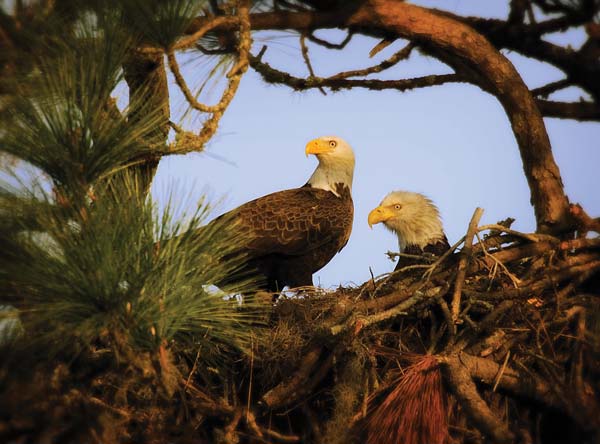 When it’s time to head north for the summer, the eagles put a hole in the nest so that no other birds can use it in their absence. They return to the same nest year after year, according to Midge.

The cemetery, which was established in 1867, obviously offers solitude and a safe haven for the eagles that have nested there. And possibly some fond memories—last year, a very old eagle hung around Lone Oak for the season.

“He was so old that his white feathers had turned yellow,” Midge describes. “Maybe he had been here when he was younger and remembered that it was his first home.” 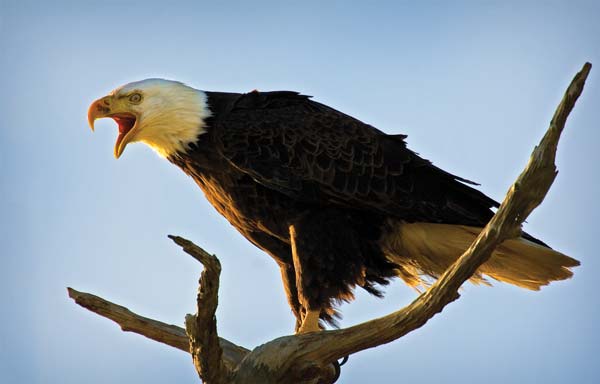 You May Not Know About Florida’s Bald Eagles

1. Until Death Do Us Part

Bald eagles mate for life, but if one partner dies the surviving partner will find a new mate. In Florida, eagles mate in the winter and their reproduction process is annual. Most pairs produce two eggs every season.

Eagles move north during Florida’s hot months, but return to their same nests year after year. They often enlarge the structures, using sticks up to five feet long. Nests are usually high above the ground—as much as 100 feet in the air—and are four to five feet wide. Biologists, however, have recorded nests that were nine feet in diameter and weighed up to two tons.

3. Not Your Average Snowbird

Florida’s bald eagles constitute 85 percent of the entire southern eagle population with 1,000 to 1,200 mated pairs nesting in Florida annually. Bald eagles are no longer protected under the U.S. Endangered Species Act. In Florida, however, they are protected by the state’s newly enacted bald eagle regulation (FAC 68A-16.002) that went into effect in May and ensures that Florida’s eagle population will remain stable or increase.

Southern bald eagles are considerably smaller than their northern counterparts, but they still have a wingspan from 6.5 to 8 feet. Adults are dark brown with white heads and tails, and females are actually larger than the males. They are usually seen perched in the open or soaring with very long and broad wings. Juveniles are chocolate brown with varying degrees of mottled white on their tails, stomachs, and wing linings. The birds acquire the white head and tail feathers in about their fourth year and are thus considered adults.

During the 2007 nesting season, the Florida Fish and Wildlife Conservation Commission (FWC) surveyed known eagle nesting territories and found more than 1,100 active nests in Florida. That’s compared to only 88 nests when the surveys began in 1973. Surveyors counted more than 65 active nests in Lake County and 15 active locations in Sumter County in 2007.

Eagles soar year-round at Lake County’s Emeralda Marsh Conservation Area in Lake County between Highways 42 and 44. Located near the headwaters of the Ocklawaha River, Emeralda Marsh was recently named a Great Florida Birding Trail site. Visitors can hike along levees and other marked trails to view wildlife in the hammocks, pastures, and extensive sawgrass and wet prairie marshes.

7. Going Fishing Or Robbing An Osprey

Fish is the principal food for bald eagles. The birds take prey from the water by using their strong talons. They’ve also been known to steal food from other raptors. Eagles have been seen harassing ospreys, forcing them to drop freshly caught fish that the eagles can catch in mid-air. Eagles also eat ducks, small animals, reptiles, and carrion.

Eagles are at the top of their food chain as predators. Any pollution or poison that contaminates the food chain eventually affects eagles. Because of agricultural pesticides and other pollutants, eagles declined in number during the past 50 years. Now that many such poisons are banned, the birds are recovering from population losses, especially in Florida where they are still protected.

The osprey may also be classed with the eagle. It is always represented as a white eagle and is referred to in heraldry as a sea-eagle.

Long before the eagle became a symbol for our nation, other empires and nations adopted the eagle as their official symbol, including the Persians, Babylonians, and Romans. The eagle symbolizes lofty spirit, ingenuity, and speed in comprehension. In Christianity, the eagle represents salvation, redemption, and resurrection. The head, wings, and legs or talons are often used as symbols in heraldry. An eagle drawn without its beak or legs is called an “alerion,” and represents a formerly great warrior who was seriously injured in combat and is no longer able to fight. 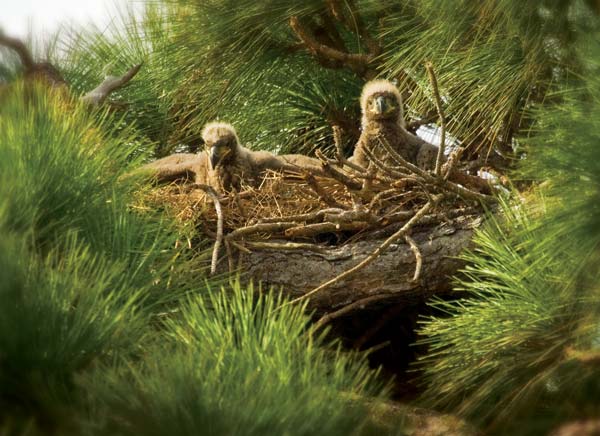