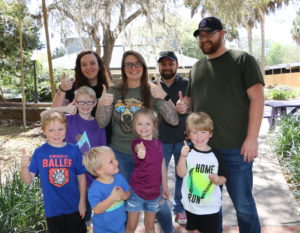 The annual luncheon to benefit the Pace Center for Girls— Marion was held February 23rd and featured moving testimonials from alumnae and current students as well as a presentation by State Attorney Bill Gladson. 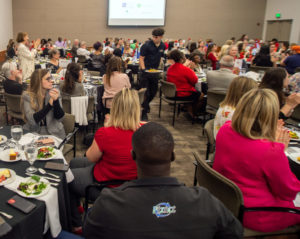 All of the additions and renovations at the Reilly Arts Center were in the spotlight during a celebration on March 9th that included walk-throughs of the new classrooms, NOMA Black Box and Frank DeLuca Grand Lobby.

HUGS Charities Inc. hosted its 12th annual HUGS Fundraiser on March 31st, in memory of David “Duder” Tuck, a community member and volunteer observer for the Marion County Sheriff ’s Office Aviation Unit and for whom the K-9 Duder is named.

More than 200 attendees helped raise money on March 10th for Project Hope, a nonprofit that supports homeless women and their children, and honored businessman and philanthropist Frank DeLuca. On April 13th, $62,000 was donated to Project Hope.

Erin Jackson has fond memories of being a “nerdy” student and Skate Mania “rink rat.” Brittany Bowe was “always in the gym” when her father was the basketball coach for Belleview High School. Joey Mantia recalls strapping on inline skates and taking “to the streets of Ocala at 2am with no traffic.”

The long-track speed skating Olympians were back in town in March for a slew of celebrations in honor of Jackson becoming the first Black American woman to win a Winter Olympic gold medal in an individual event and Bowe and Mantia winning bronze medals during the games in Beijing. Jackson initially failed to make the cut in her signature event, but Bowe gave up her spot in the 500-meter race so her friend could compete.

The three also have long lists of wins in world championships and other competitions. They live and train in Utah, but it all started in Ocala.

Among the local events were visits to their alma maters, a ceremony at the Howard Academy Community Center to induct Jackson into the Black History Museum of Marion County, a luncheon with students at the College of Central Florida (CF) and a parade.

Mary Sue Rich, the first Black female city council member in Ocala, told Jackson, “I understand the importance of being the first in your fi eld and the responsibility that carries. Do not let the gravity of that title weigh you down, but understand that it will inspire a new generation of athletes who will embrace your legacy. You have broken barriers and placed a spotlight on our city. We hope you feel the love and support of this community, all three of you.”

“Thank you so much,” Jackson said. “Being here and seeing everyone come out in support and all the presentations, it’s been amazing. It’s an honor.”

At the college, Bowe, Jackson and Mantia were each seated with middle, high school and CF students and fielded questions from the young men and women in a quiet manner before nursing student Dominique Gandiongco led an open Q&A session.

Francine Julius Edwards, on the planning committee for the welcome home events, said she wanted to include the young Ocalans in the luncheon because, “We want to have our children inspired to do better in school and it’s important to have mentors.” 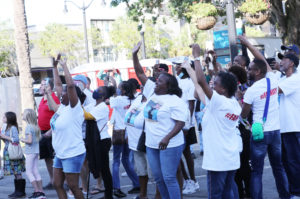 Joshua Moore, a senior at Vanguard High, sat with Bowe.

“I got to learn about Brittany and that we all are going through the same situations at school and we all have a specific goal we are trying to achieve,” he said. “It was a great experience.”

As for what inspires the Olympians, Bowe offered: “Being victorious is one of the best feelings in the world but being here in Ocala sharing it with so many people is what makes it really special.”