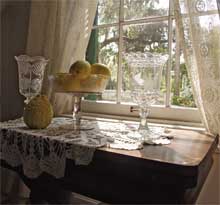 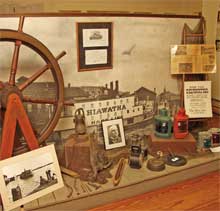 Palatka may not be on anyone’s list of recommended tourist destinations, but if you’re a history buff, you might want to spend some time exploring this century-and-a-half-old community. Although the boom-to-bust fortunes of this city — whose Indian name means “cow crossing” — continues to this day, Palatka tenaciously struggles to preserve its past. One example is the city’s commitment to the 150-year-old Bronson-Mulholland House and the adjacent Putman Historic Museum, both located in the city’s North Historic District.

The three-story antebellum mansion sits on the west side of the St. Johns River, just three blocks north of US-19. It once had a commanding view of the river, but over the decades much of the land surrounding the home had to be sold. Today, it’s surrounded by private homes and a not-too-distant waterfront Holiday Inn. But its stately grandeur amid the surrounding moss-laden oak trees has not been diminished.

The circa 1854 house was built by Judge Isaac Bronson, one of the city’s founding fathers. During the Civil War it served as a lookout point for both Rebel and Union forces and as a schoolhouse for freed slaves afterwards. By 1904, the house had passed into the hands of Mary Mulholland. When she died in 1935 she left the house to her ward, Edlemire Rivero. Due to costs of maintenance and taxes, Rivero sold the house and removed the furniture. After that, the home had a succession of owners, finally ending up as an 11-room apartment house.

By the time the City of Palatka decided to buy the home, it was in such a state of neglect, including damage sustained from a near catastrophic fire, serious thought was given to just demolishing it. But the Putnam County Historic Society came to the rescue raising the necessary funds, making basic repairs, and getting the home placed on the National Register of Historic Sites.

Full restoration of the house was begun in 1975 with funding from a Federal Block Grant. It was finished and dedicated two years later. A second floor apartment was later added to the rear of the house and the city hired a live-in docent to watch over the home and to conduct tours for the general public

The Putman Historic Museum, located next door to the Bronson-Mulholland mansion, is housed in the oldest surviving building in Palatka. Built circa 1837, the building was one of eleven barracks that made up Fort Shannon. The fort served as a military outpost during the Second Seminole War. The structure was relocated to its current location. In 1984 it was dedicated as an historic site.

Visitors will find artifacts, furniture, photographs and maps from various periods of Putnam County’s history. One of the more interesting displays involves artifacts from the Hiawatha, Palatka’s largest and most luxurious steamer that once plied the St Johns during the city’s “golden age” as a major port.

Guy Tillis is the newly named manager of the museum. He is also the current docent at the mansion and a member of the board of directors for the Putnam County Historical Society. He feels the Bronson-Mulholland house doesn’t quite get the attention it deserves when it comes to attracting visitors — that its out-of-the-way location has relegated it to a sort of backwater of historic sites. He urges the traveling public to take the time to visit not only the museum, but also this rare gem of a home.

“It is one of the finest examples of antebellum architecture in northeast Florida,” he says. “It’s a miracle it even survived with the amount of destruction it has suffered over the years.”

What: The Bronson-Mulholland House & the Putman Historic Museum
Where: Historic Downtown Palatka
Hours: 2-5pm on Sunday, Tuesday, and Thursday
Cost: Admission is free