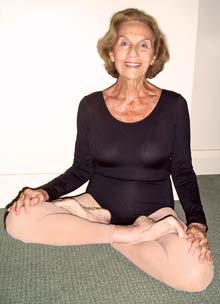 About 35 years ago, Adela Choquet decided to tag along with a friend to a yoga class in South Florida. A native of Chile, Adela had never heard of yoga before and, at age 55, she found the ancient physical exercises baffling on that first day.

“The room was big, and full of very young people,” Adela says. “I thought, ‘What am I doing here?’ If I’d had my own car, I would have left because I was completely lost.”

But she couldn’t impose on her friend to take her home. She had to stick it out. And it was a three-hour class.

Now at 92, Adela is one of the most popular yoga instructors in The Villages. When she looks back, she says being stranded without a car that day was the best thing that could have happened to her.

“You are going to concentrate on the muscles you are stretching,” Adela says. “You work with your body and your mind.”

She’s been teaching it since the early 1970s. Today, her students are all Villages residents—most of them age 55 and older. And many have been Adela’s students for several years. She moved to The Villages 11 years ago and has been teaching at the Wellness Center for eight.

Though many people would assume retirees are not extremely strong or flexible, Adela and her students prove that assumption wrong. At 104 pounds, 4 feet 10 inches tall, Adela and many of her students can perform advanced yoga maneuvers such as backbends, arm balances, abdomen strength moves, and inverted positions.

Adela says on that long-ago first day she couldn’t get her knees even close to the ground when she tried sitting cross-legged on the floor with the other students.

“I never sat in yoga position before. My knees were up to here,” she says, pointing out how high her knees rose awkwardly.

That’s all different today. Now she can lie with her stomach flat on the floor, while her legs spread in a full straddle position. And, of course, she can do full Lotus, which is an advanced cross-legged seated position.

“She’s remarkable. I don’t know what to say—she’s amazing,” says John Ruhsenberger, her student for six and a half years.

At her age, Adela says she does have some ailments, and she notices she’s gotten a bit shorter over the years. But somehow these age-induced conditions don’t have much power over her.

“With yoga, I control my arthritis which bothers me little,” Adela says.

Adela’s morning class has about 20 barefoot practitioners of both men and women spread on yoga mats. While Adela gives her gentle but clear instruction, her students silently go through movements of all types.

The vibe in the dusky room was tranquil, but at the same time energetic—a haven of physical comfort and strength.

“You forget everything outside of the room,” Adela says.

Adela’s classes end in a session of relaxation where students lie on the floor, and release all tension from their bodies. She teaches several classes at The Villages Wellness Center. Some are for beginners, while others are for advanced practitioners.

“Adela cares so much about every one of her students. She wants us to benefit,” says Elaine Eisenhauer, her student of six years.

Before Elaine moved to The Villages from the Boston area, she had tried yoga a few times, but it never caught on with her for some reason. All that changed when she met Adela.

“Adela is the living model of what yoga is supposed to be about,” Elaine says. “Adela lives it. She is the reason I am as involved in yoga as I am. She has made a huge difference in my life, because I feel better than I’ve ever felt in my life.”

Adela, a mother of four, says yoga practiced regularly can help alleviate headaches, backaches, weight problems, and stimulate every vital organ and gland of the body.

She also says yoga can help eliminate bad habits like smoking because of the mind-body connection yoga guides practitioners to make.

“Be careful,” Adela says with smiling aquamarine eyes. “Yoga is addictive. Once you try it, you can’t leave it alone.”

FIGHT DISEASE. The postures and movements in yoga massage the internal organs, enhancing blood circulation and functionality, thus lessening the risk of illness.

INCREASE FLEXIBILITY. Practicing yoga will enable you to relax your muscles and become more flexible.

EASE YOUR JOINTS. Holding yoga poses is a natural way to lubricate and relax the joints throughout the body.

HAVE MORE ENERGY. You can have calmness of mind at all times by practicing yoga. Yoga will allow you to get a better night’s sleep, giving you a boost in energy throughout the day.

BE GRACEFUL. When practicing yoga, your level of grace, elegance, balance, and poise will increase.