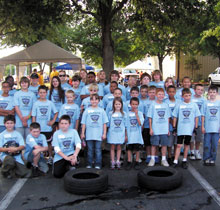 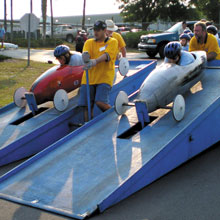 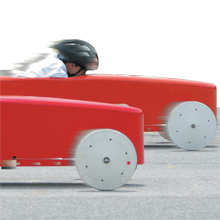 it’s reassuring to know that some things stand the test of time.

Kids today play with Silly Putty, Slinkys, Play Dough, and Mr. Potato Head, just as their parents did as children. Soap Box Derby racing fits into the same category. It’s been around for almost 75 years, but the sport appeals to today’s youth just as much as it did to the Depression-era boys who launched it.

Soap Box Derby racing may have originated in the heartland of Ohio, but it’s no stranger to Marion County. Three young drivers from our county headed to Akron for the All-American Soap Box Derby World Championships on Saturday, July 21. These winners from the local May races are Joe Menter, 10, Stock division; Chandler Soucey, 11, Super Stock division; and Rebecca Cummings, 15, Masters division.

It’s fitting that the championships are held in the same state that gave birth to the Soap Box Derby. The whole thing started casually enough in 1933 when Myron Scott, a photographer for the Dayton (Ohio) Daily News, saw three boys racing homemade cars without engines on a downhill stretch of brick road. Scott thought it would be a great idea (so great, in fact, that he later copyrighted it), to hold a coasting race and award a prize to the winner.

The first race was a success and Scott was inspired. He managed to talk his editor into letting him promote the race, and was even given $200 (a substantial amount, given the era) to finance the race, which was held on August 19, 1933. An astounding crowd of approximately 40,000 spectators turned out to watch the 362 kids who competed in their hand-built cars.

An enthusiastic Scott then planned a national race for 1934, which drew so much publicity that Chevrolet decided to sponsor it. Tire manufacturers Firestone, Goodrich, and General also got on board as the race came to Akron.

Since then, over one million youngsters have participated in the Soap Box Derby, also known as “The Greatest Amateur Racing Event in the World.” Held each July (July 21 this year) and televised on ESPN, the National Championships draw about 500 drivers from nearly every state and several foreign countries.

Some of those young drivers call Marion County home, thanks to the Ocala Soap Box Derby, Inc., a club that started four years ago to bring the sport to north central Florida. Remarkably, the club builds and pays for all of the cars that participating drivers race. Currently, the club has 35 cars and all of them were in use for the local race this May.

“Each car is built from a kit and we buy the kits out of Akron. The kit has everything you need, but we have to do all the work of putting the car together and painting the body,” explains Alan Cummings, president of Ocala Soap Box Derby, Inc., and also pastor at Silver Spring Shores Presbyterian Church where race-related activities are often held.

“Back when I was racing, all you bought were the wheels and you made your own car,” recalls Ralph Limeberry, one of the race directors from the Ocala club. Limeberry raced in Pennsylvania as a boy and was one of the founders of Ocala Soap Box Derby, Inc. Now he helps build cars, works to find sponsors and is also a race starter.

Unlike the kids in the 1930s who put their cars together with scrap wood and junk metal, today’s cars are all built from kits and fall into three different categories: Stock, Super Stock, and Masters. In each division, lead weights are added as needed to insure that each car weighs the appropriate amount since these races are all about gravity.

Racers ages eight to 14 can compete in the Stock division, which features basic lean-forward model cars. (Imagine sitting in a kayak with your legs straight ahead, but leaning forward to steer and lower wind resistance.) Each car weighs approximately 60 pounds and the weight limit, including driver, is 200 pounds. First-time racers typically start out in the Stock division.

In the Super Stock division, youth ages 10 to 17 compete in more advanced cars that have a weight limit of 230 pounds, including driver. These cars can accommodate larger drivers and also feature a lean-forward design.

The Masters division, also for racers ages 10 to 17, features kit cars with fiberglass bodies that allow for more expression of creativity and design. Masters division cars have an enclosed design in which the driver lies down. Maximum weight in this division is 255 pounds.

“This is strictly gravity; the less wind resistance you create, the faster you go,” says Cummings. “Some races are decided by one-thousandth of a second. We’ve clocked them going up to 23 miles per hour.”

Drivers race two at a time in individual lanes on the downhill stretch of Cypress Road at the Georgia Pacific manufacturing plant location in Silver Springs Shores. Picture the bobsled starting ramp at the Olympics and you have an idea of the start. A pedal holds the cars in place and once the starter releases it, gravity takes over and the cars head down the hill. An electronic timer determines the winner.

“There are two different ways to get to Akron,” notes Cummings. “The three division winners of the local races in May automatically advance to Akron. We also have rally races in November and March and you can accumulate points. You need 180 points to be guaranteed a place at Akron and you only get 40 points for winning one rally.”

To keep the competition as fair as possible, once a driver has won a local race, their car is permanently retired and they have to compete in another division. (This doesn’t apply if you win a rally.)

“I saw it on TV and thought it looked pretty cool,” says Cory Arterburn, 11, who is racing in the Super Stock division. This is the first year of racing for Cory, a student at Maplewood Elementary.

“We watched the finals last year on TV, and we went through the paper in the spring and saw they needed drivers for this year’s race,” says his father, Brent Arterburn, who helped with some of the adjustments on his son’s car before the race. “I thought I’d have to build a car. We probably wouldn’t have been able to participate this year if it wasn’t for the club buying the cars, and the sponsors. It’s awesome. I wish I’d been able to do this when I was a kid.”

“It’ll be a fun thing for him and his dad to do together,” says Justin’s mother, Brenda. “He’s excited and has wanted to be part of this.”

Contrary to what you might think, the drivers are not all boys. The Ocala club presently has six Masters division cars and of those, four are being driven by girls.

The club’s 2006 Super Stock Champion was Charlotte Soucey, who is racing in the Masters division this year. Charlotte attends Lake Weir High School and is now 15. Her younger brother, Chandler, 11, is also into the Soap Box Derby and is now racing Super Stock. Their father, Roger Soucey, is a member of the board of directors for the Ocala club.

Soucey, Cummings, and other volunteers build the cars and help young racers interested in participating. A crew of community volunteers works the local races and rallies. Parents pay a registration fee for the race.

Al Remenicky, who has been involved in Soap Box Derby for 15 years and raced for two years as a young boy, sums it up best when he says, “This gets young kids started on the right track and you meet an awful lot of nice people.”