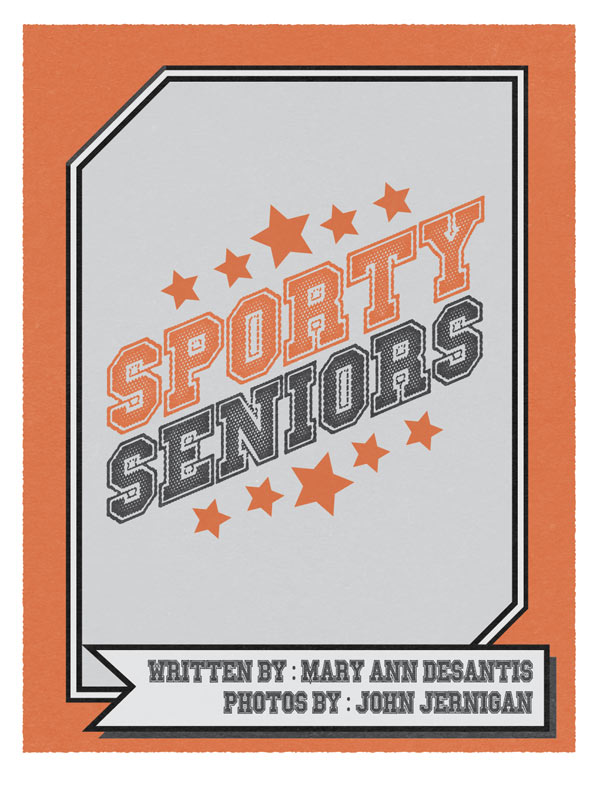 Age is just a number for many seniors who spend their days participating in their favorite sports. They certainly defy the image of what many people think retired means. If anything, it’s not sitting in a rocking chair and watching sports on television… it’s more about lacing up the running shoes, picking up a racquet, swinging a bat or even breaking a board with one quick kick.

And they aren’t alone. Millions of Americans over the age of 55 participate in regular forms of exercise and team sports. While some seniors still insist playing sports is too hard or harmful, studies show that “taking it easy” can be even riskier. When people lose their ability to be independent, it’s often because they have not been active. According to the U.S. Surgeon General’s Report on Physical Activity and Health, inactive people are twice as likely to develop heart disease or other illnesses. They also require more medicines and visits to the doctor. 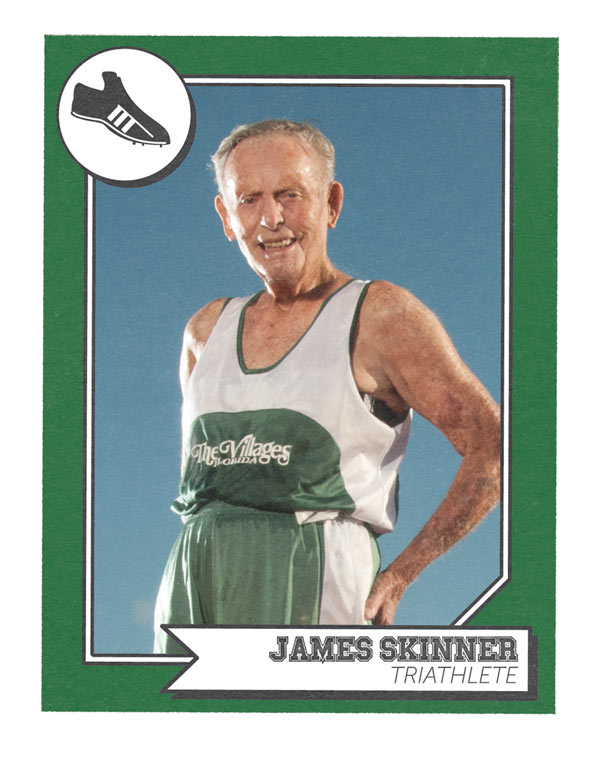 When I arrive at a coffee shop to interview James Skinner, I have a very hard time finding him in the crowd. I am looking for a 90 year old, but I don’t see anyone who looks like a nonagenarian. When a thin man in running shorts and shoes greets me first with a strong voice and a firm handshake, I realize this man defies the limitations often associated with the elderly.

The U.S. Marine veteran unabashedly tells me he’s something special.

All of it, he believes, has made him stronger.

He’s a formidable competitor, but he seemingly would rather talk about his military service than his athletic accomplishments, which includes a tandem skydive on his 90th birthday last May. James has consistently won gold medals in Senior Games in cycling and running. In December, he plans to compete in the statewide Senior Games in Ft. Myers. He hopes to qualify for a spot in the national games to be held next summer in Cleveland.

In addition to Senior Games competitions, he has participated for several years in the National Veterans Golden Age Games. He took first place last year in the cycling events and in the one-half- and one-quarter-mile track events. He also placed third in the swimming freestyle event for the 85+ division.

“No one can beat me in cycling,” he says in a matter-of-fact tone. “Running may be a different story. I’m in the 85+ category, and I could be in trouble if another runner just turned 85.”

Nevertheless, he goes to the track at 7:30am three days a week to run and work with a coach. On Tuesdays and Thursdays, he is in his swimming pool by 7am to work out with a noodle to simulate bicycling.

James was always athletic. In high school, he was on the cross country running team and a gymnast. His dad wouldn’t let him join the U.S. Marines until after his 1942 graduation. He says it was his battlefield experience that made him a fast runner.

“I run like I do because I had a machine gunner shooting at [me],” he says with a laugh.

After the war, he married and went to college in New York. He moved to the St. Petersburg area in the mid-1950s to be near his mother and sister, who was a Weeki Wachee mermaid. He built swimming pools, and he and his late wife Colene raised six children, who were all great swimmers.

Swimming remains his favorite activity, although he’s discovered ballroom dancing since moving to The Villages five years ago.

“I work out in the pool every day in one way or another,” he explains.

So, does this senior super jock eat anything special?

“I have a coffee and a piece of toast every morning,” he says. “I’ve never had a special diet—and I never will.”

As far as his philosophy, James says it’s simply to keep moving and take life one day at a time.

“There’s no such thing as an easy way to do things,” he explains. “You’ve got to know your limitations and understand what your own body can do.” 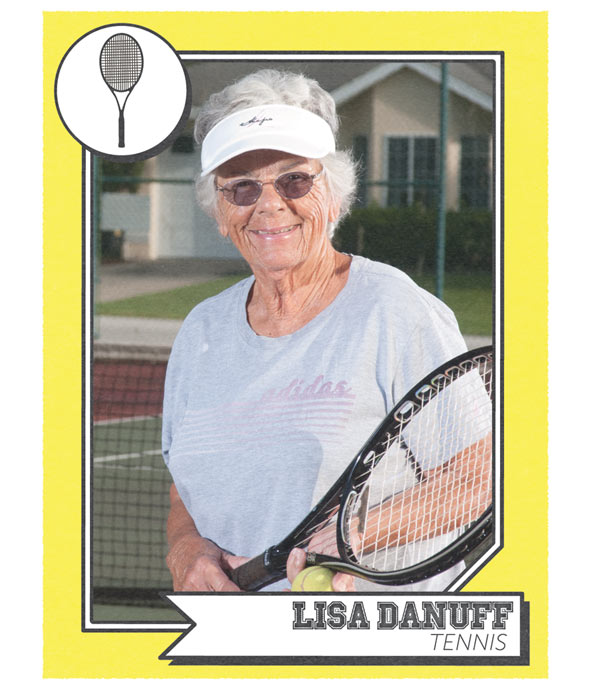 Tennis has always been a big part of Lisa Danuff’s life. After moving to Ocala in 1973, she and her late husband, Mort, taught math at Vanguard High School where they also coached the tennis teams.

Since retiring, it’s not unusual to find her on the courts five days a week. In addition to swinging a tennis racquet, she also knows how to swing a golf club.

“When my husband and I retired, we picked Ocala Palms because we wanted to play both tennis and golf,” she says.

She emphasizes that both her golf and tennis games are strictly social now.

“We have friendly competitions,” she says with a laugh. “Everyone is out to have a good time and not get too serious about it.”

Her four children—two boys and two girls—grew up to be tennis players as well. Not surprisingly, the Danuffs played tennis as a family.

Despite a bout with tennis elbow, Lisa has not had a serious injury due to tennis. She acknowledges that it may be hard for some seniors to take up a sport if they’ve never played before.

“If they want to play, though, I think they should just go for it,” she says. 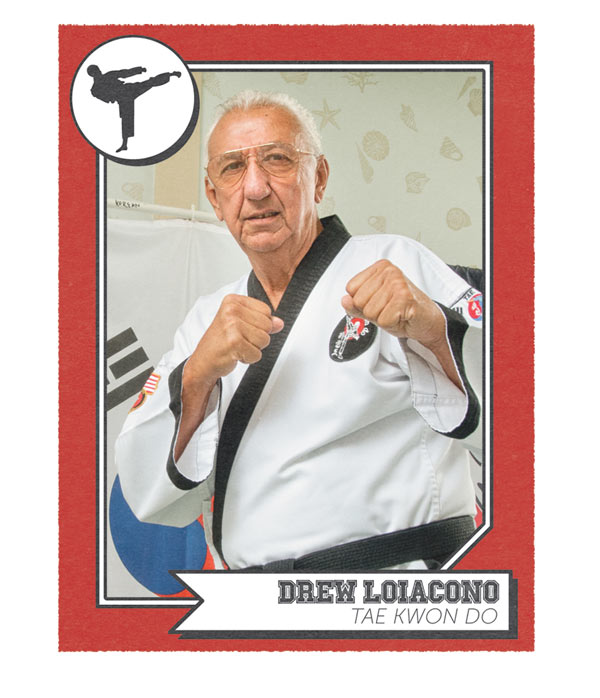 Tae kwon do is more than a sport to Drew Loiacono. It’s his mission to get more seniors involved in the martial art that he says improves balance, coordination, self-confidence and concentration.

He began studying the Korean discipline in 1975 and received a Black Belt in 1979. For 16 years, he operated a martial arts studio in Fort Lauderdale. When he moved to The Villages in 2006, a bad hip was slowing him down.

Tae kwon do emphasizes kicking techniques because the leg is the longest and strongest weapon a martial artist has. Kicks distinguish it from karate or kung fu. One of the most popular martial arts with both men and women of all ages, tae kwon do is also known for the breaking of wooden boards, bricks or tiles, which requires the participant to master both the physical technique as well as the concentration to focus one’s power.

“I had lunch with my grand master when I decided to move here,” says Drew. “He said I needed to continue teaching tae kwon do, but to seniors who could benefit from the techniques.”

Two years ago, he started a tae kwon do group that now boasts 60 members and meets at least three mornings each week.

“Martial arts seem very mysterious to people, but they hear about it from friends and want to see what we’re doing,” he says. “Some have wanted to study tae kwon do for years but couldn’t take it when they were younger and working or raising families.”

Drew has many women join his classes because they want the strength and fitness that comes with the activity. Others are looking to increase self-confidence, coordination and concentration.

“Many are taking the first step to reach new goals that they thought were out of the question,” he says.

“At this particular age, nothing comes easily,” he says. “It takes longer to achieve goals, but if you make the commitment and work at it, you can excel.” 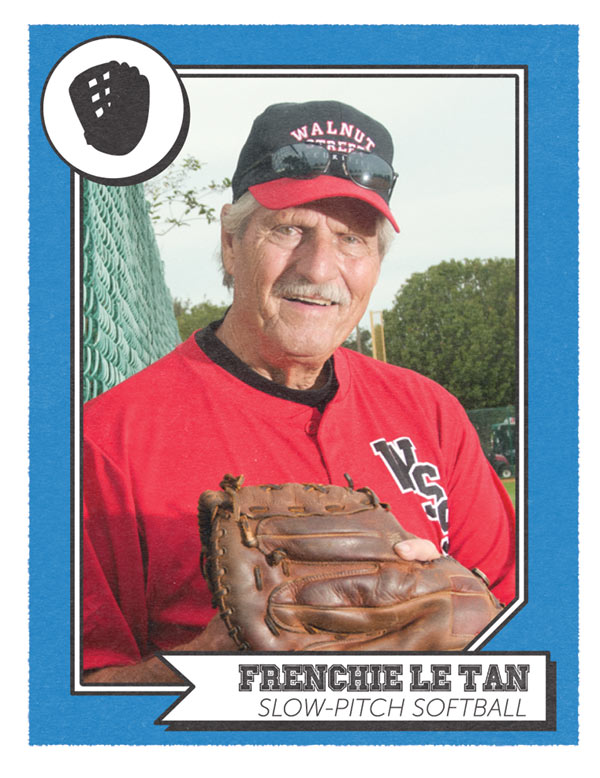 Frenchie Le Tan grew up in a tough section of Baltimore, but playing baseball and softball kept him focused. His lifelong love of baseball led him to play fast-pitch softball throughout his adult life, often with nationally prominent teams.

“People here recognize many of the team names like Carling Brewery and Fitzburgers,” says Frenchie.

Today, he plays on and manages three slow-pitch teams. One of his teams, Walnut Street Security, is ranked No. 1 in Florida.

“I didn’t start playing slow-pitch softball until 1988,” he says. I gave up fast-pitch at age 49 because it was hard to compete with younger guys. Slow-pitch leagues have given guys over 50 an opportunity to play ball again.”

Fast-pitch softball is a pitcher’s game, while slow-pitch is a hitter’s game. The fast-pitch game depends on a powerful pitcher who can throw with great speed, sometimes up to 100 miles per hour. Slow pitchers have a 12-foot arc that allows batters to put the ball into play more easily. The difference makes it much easier for seniors to pick up the game later in life.

“The ball is thrown softly, and people can learn to hit it,” he explains. “Timing and coordination come together faster and better than it does in fast pitch.”

“Slow pitch gives everyone an opportunity to play, and it’s taken over in popularity. There are a few fast-pitch softball teams left but not as many as there used to be.”

Frenchie plays first base on all of his teams. He says he’s “slowed up” a little this fall because he’ll play only three times a week and travel to out-of-town games once a month. He still finds time to play golf twice a week, work out at a health club and spend time with his wife of 61 years, Shirley.

As the manager of his teams, he works to maintain relationships with sponsors, organizes trips and does pretty much anything that needs to be done. He also scouts for new players who are moving to the area, many of which played on nationally ranked teams.

“I think softball has surpassed golf as an incentive to move to this area,” he says. “When people hear about the softball program, they want to come. I’ve met people here that I played against in Maryland years ago.”

A resident of The Villages for 12 years, Frenchie says softball players in the retirement community “probably lead the world in knee replacements and rotator cuff operations.”

He recommends new players take time to get back in shape, especially the legs. And then it’s all about doing things in moderation.

“Some guys think they are 22 again and pull muscles right away,” he says. “On my three teams, I think we have five guys out for knee replacements.”

When players are healthy, though, Frenchie says watching them is one of the most enjoyable things about the game. He also says that softball has given many people a way to stay healthy.

“A lot of guys my age are sitting on a couch all day,” he says. “We have guys playing four or five times a week who say that’s where they’d be if it weren’t for softball.”