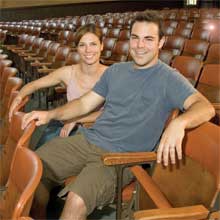 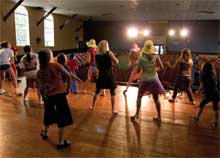 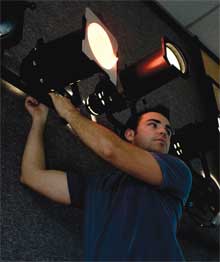 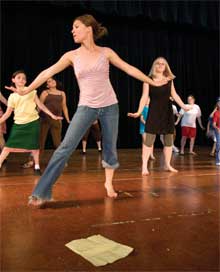 When you’re a kid, what’s more fun than dressing up and playing make-believe?

Joel and Amanda Warren want Mount Dora-area children to get to play make-believe on stage. The young couple recently founded The Warren Acting Company, launching a new children’s theater based in the Mount Dora Community Building.

Already on the agenda are basic acting classes, an original adapted production of Snow White in May, and two upcoming sessions of summer theater camp.

“We love working with children,” says Amanda, who serves as co-director with husband Joel. “They have such great imaginations and enthusiasm. The possibilities are limitless and having fun is the most important thing.”

GROWING UP IN SCOTTSDALE, ARIZONA, Amanda has never forgotten the fun she had when her mother took her to a children’s theater when she was seven.

“I was hooked right away,” she says. “My first part was as one of the ugly step-sisters in Cinderella. I had a great time and I’ve been involved in theater ever since.”

Appropriately enough, Amanda and Joel met while attending the California Institute for the Arts in Valencia. Both graduated with bachelor’s degrees of Fine Arts in Theater; she in 2005 and he in 2004. Original-ly from the Orlando area, Joel returned to Florida when offered an assistant artistic director position at the Mount Dora Theatre Company’s Icehouse Theatre. It wasn’t long before he assumed the title of artistic director. Amanda soon followed Joel to Mount Dora, first as child-ren’s summer camp choreographer and then as head of the Young Actors Theatre.

“We decided to branch out earlier this year on our own and started The Warren Acting Company,” says Amanda. “We just wanted to go in a different direction and saw a great need in the Mount Dora area for children interested in the theater arts.”

Within two weeks, the Warrens had 60 children enrolled in their basic acting classes. It will be these children who will take part in the May 18-20 production of Snow White.

“When you work with children, you want to include as many of them as possible in a production,” she explains. “It’s a normal thing to create more parts and songs in the classic productions for children. Joel and I usually write two to three shows a year.”

ONCE THE Snow White production is over, the focus will switch to two four-week sessions of theater summer camps.

“The summer camps give us a chance to expose the children to all aspects of theater,” says Amanda. “There will be classes in acting, dancing, singing, playwriting, even auditioning techniques. It really gives the students a good overall education and feel for the theater.”

Those enrolled in the summer camps will stage two productions, Joseph and The Amazing Technicolor Dreamcoat and High School Musical.

“Besides getting a good all-around theater education in the summer camps,” says Amanda, “putting on the plays gives everyone a goal to work toward. And, of course, it’s a lot of fun, too.”

And if nothing else, playing make-believe should definitely be fun.