Held hostage by unrelenting grief, Naomi Shanti found her ransom in art—one brush stroke, one tattoo at a time. Her 12 years and counting artistic journey began in Florida, wound through two other states, then circled back to Ocala. 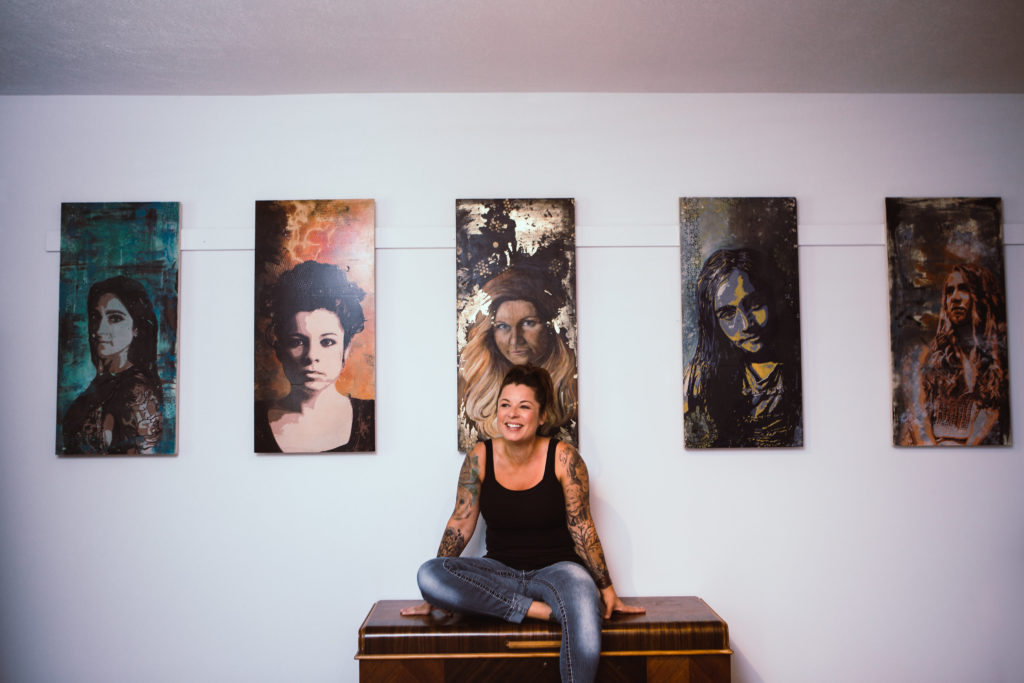 At first glance, tattoos and fine art seem to be an unlikely pairing. But two steps into Naomi Shanti’s Alchemy Tattoo and Fine Art studio, the palpable synergy of the two creative elements is a true aha! moment.

With plenty of natural light streaming in from large windows, the studio’s cool gray and black color scheme is immediately inviting. Three of Shanti’s She series, bold and bright watercolor portraits of women on 17-inch by 36-inch birch panels, grace the wall above the sleek black leather couch. A coffee table and bookshelves bear art books, smaller art prints, photos and candles. Behind Shanti’s simple black wooden desk in the common area is a self-portrait, the first piece of her She series.

“Some of my amazing friends inspired my She series and it has continued to be inspired by other women I have the good fortune to cross paths with,” explains Shanti, 42, a petite brunette who displays her tattooist bona fides with two arm sleeves of tattoos; others from her neck down, front and back, to the tops of her feet. “Each woman represents their unique stories and how I connect to those stories. It’s an ongoing series and I’m up to 10.”

To the left of the common area, white wood panels mark off three stalls for apprentice tattooists Alyssa Perry and Katie Biggi, as well as for Jessie Peek, the studio’s art manager. On the outside of the stall walls is more artwork, all eye-catching different styles than Shanti’s, created by the aforementioned artists.

The final studio stall is Shanti’s, occupied during this visit by an attention-grabbing, work-in-progress nude watercolor painting of an African American woman on a 2 feet by 4 feet birch panel.

“This painting is currently my obsession. I look forward to spending time with her every day,” admits Shanti, who works from photographs she takes of her subjects, displaying them on a mounted iPad next to the work. “She is such a beautiful and soulful woman. The final step will be painting on her body tattoos. I am so honored to be doing this project.”

Much like her commissioned portrait paintings, Shanti’s tattoo artwork is also original, no picking out a stencil applique on the wall for her.

“Just like my portrait clients, I have consultations with my tattoo clients. We get to know each other and collaborate on their tattoo,” says Shanti. “It can take days of drawing before I’m ready to sketch and then ink on the client. Skin is the most challenging canvas of all. I can typically do two large tattoos in a day, while smaller ones can take an hour or two.”

Shanti notes that she has to be “intentional with my energy and the time I devote to my tattoo and portrait work. Tuesday is painting day and Wednesday through Saturday are tattoo days.”

Looking around her studio, Shanti smiles, takes a deep breath and sighs with gratitude, saying, “Twelve years ago, I could not have imagined that this is where I’d be. And if not for my brother Henry, who inspires me every day, I wouldn’t be here.”

Before she was a tattooist and fine artist, Shanti was a hair and makeup artist living in Deltona with her husband Jason Ballard, a firefighter, and their sons Cody and Preston. She worked for Orlando-based About Face Design Team. 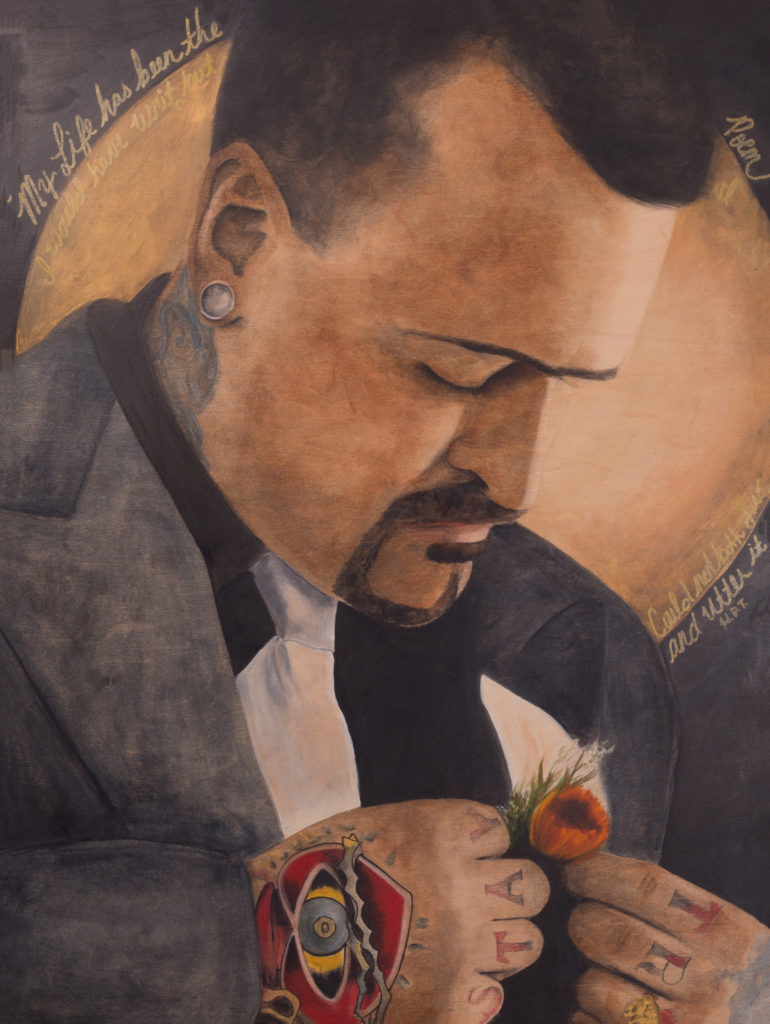 “I specialized in doing hair and makeup for weddings and photo shoots. I really did enjoy the work since it was always different and creative,” explains Shanti. “On the morning of July 14, 2008, I was about to head out at 4am to prepare for a wedding at Disney World. Then I got the call no one ever wants to get about a loved one. My older brother Henry had been killed in a car accident. I was devastated down to my soul.”

Henry, 36, who owned Hard Core Tattoo in Cedar Rapids, Iowa, had ridden his motorcycle to a friend’s house. After a night of drinking, Henry wisely decided not to ride his motorcycle home. But unfortunately, his friend, who also had been drinking, decided to drive Henry home.

“Henry’s friend lost control of the car and they crashed on a dark Iowa country road. The crash killed them both,” Shanti says softly. “Henry never made it home.”

For the sake of accuracy, Shanti mentions that Henry was her half-brother. But her love for him was and is just as strong as her love for her younger brother Ben. Just a month before Henry’s death, the whole extended family had been together for Ben’s wedding in California.

“Seven years older than me, Henry was always my idol and protector. While we didn’t live in the same house growing up, we spent many wonderful, magical weekends together,” recounts Shanti, a long-found peace in her voice. “Henry was a true free spirit and a self-taught artist. One of my favorite memories is us sitting around a coffee table and playing this drawing contest. You called out what you wanted the other person to draw. I still remember once when I called out Cyndi Lauper and he drew her with a red ballpoint pen like she was in the room.”

Another memory of Henry bubbles up, this one involving his ideas about tattoos.

“At 18, I got my first tattoo, a little ladybug on my right side. Shortly after, I flew to Cedar Rapids to visit Henry. He took one look at that ladybug and had to fix it to his high standards,” says Shanti, laughing. “Then he gave me my second tattoo, purple lilies to cover up my own failed stick-and-poke attempt at giving myself a tattoo on my stomach. So drawing and tattoos were always this connection we had between us.”

And it would be that artistic connection that helped pull Shanti out of her grief.

“For nearly a year after Henry died, I was extremely depressed and very angry every day,” admits Shanti. “Then, one day, I grabbed a colored pencil, started doing a line tattoo drawing and immediately felt Henry’s spirit. And every day, I just kept drawing. My husband Jason was wonderful and kept encouraging me. By the end of the year, I decided I wanted to go to art school and I wanted to become a tattoo artist.”

In 2009, Shanti began taking art classes online from the San Francisco, California-based Academy of Art University (AAU). Jason left the Orlando Fire Department in 2010 and the family moved to Tennessee. There Jason attended the University of Tennessee at Martin to pursue a degree in wildlife biology. Shanti continued taking online art classes, worked in a hair salon and raised their sons.

“It was during that time that I also experimented painting in different mediums—charcoal, acrylics, watercolors,” notes Shanti. “But I never really painted on regular canvas. I painted on guitars, old windows, surfboards, skateboards, just about anything I could paint on, mostly animals and flowers. And I started doing art shows too.”

Shanti also began teaching community center art classes for children while taking digital photography classes, saying, “I love teaching kids and I fell in love with photography. It became another piece of my art.”

In 2013, Shanti earned her associate of art degree in illustration from AAU. Once her husband had his wildlife biologist degree in hand and a job at the Big Stone National Wildlife Refuge,  the family moved to Ortonville, Minnesota. And Shanti took an artistic leap of faith.

“With Henry in my heart, I finally stopped working in hair salons and just focused on my art and photography,” she says. “I taught art classes to kids at a friend’s photography studio. I fell in love with watercolors and painted, painted, painted.”

While still living in Ortonville, Shanti attended the University of Minnesota Morris (UMM), earning her bachelor’s in studio art in 2017.

“After taking online art classes, it was a revelation to go to actual art classes,” says Shanti. “It was wonderful and so inspiring to be surrounded by a community of artists. My art really grew and evolved during that time.”

It was also then that Shanti discovered what would become her signature canvas at a surprising place, a home improvement store.

“One day I was looking at these birch wood panels in a home improvement store and had this epiphany of painting on them,” she recalls. “To this day, Jason and I go to home improvement stores to pick out the birch panels, which are 4 feet wide by 8 feet long. And then Jason cuts them down to whatever size I want, depending on the project.” 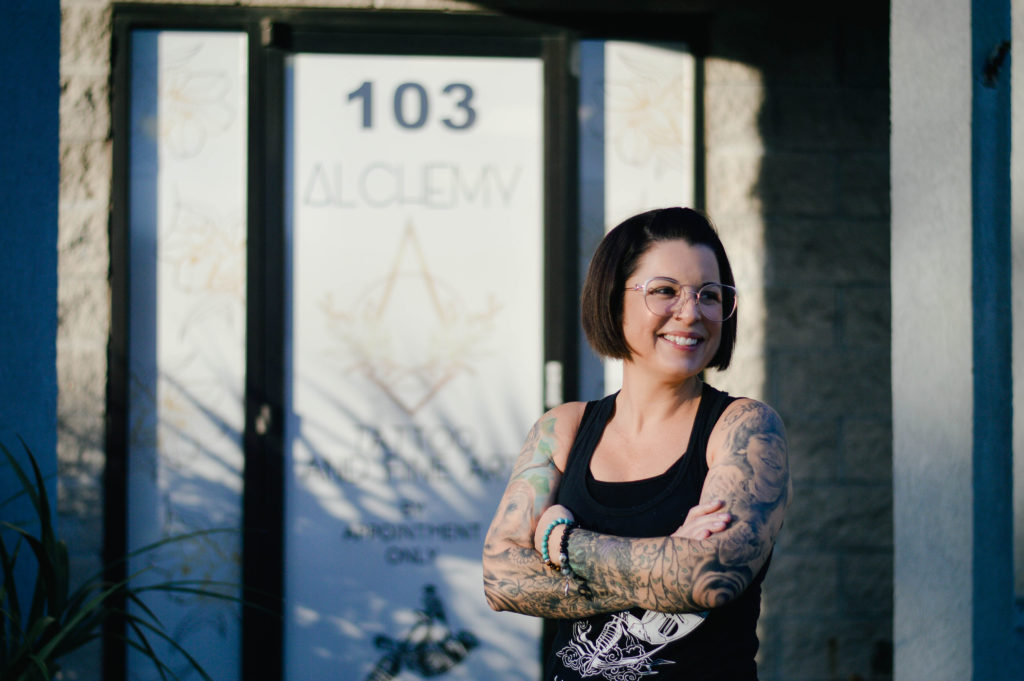 Shanti explains that “painting on birch is a methodical process done in layers to prevent the wood from swelling. I paint all the portrait faces in watercolors. Then I like to use acrylics and other mediums like screen printing for texture and depth.”

For her senior art project show at UMM, all of Shanti’s birch portrait pieces sold, including two purchased by the university. They are on display in the UMM art building and library.

“Henry was my muse throughout that project,” says Shanti, smiling.

Back To The Sunshine

Having grown weary of Minnesota’s cold, Shanti and her family were ready to move back to Florida in late 2017. As fate would have it, Jason was hired as a wildlife biologist by the Florida Fish and Wildlife Conservation Commission’s Northeast Region office in Ocala.

Shanti garnered a position as an art teacher at The Cornerstone School, teaching there for a year. Then she finally decided to make her dream of becoming a tattooist come true.

“After a year, I decided it was time to have my own business and founded Alchemy Tattoo and Fine Art in late 2019,” she offers. “Then we moved into our current location in October 2020. Henry’s creative spirit has been with me every step of the way.”

Atop a corner bookcase in Shanti’s studio stall is a watercolor portrait of Henry, 18 inches by 24 inches, on birch in a black shadowbox made by Jason. On his right hand is a sacred heart tattoo; across his knuckles is tattooed “Stay True.” Dressed in a black and gray tuxedo, he is looking down, carefully placing a boutonniere. Written in script in the upper left and bottom right corners are a Henry David Thoreau quote: “My life has been the poem I would have writ. But I could not both live and utter it.”

“I painted Henry’s portrait from a picture taken at Ben’s wedding, a month before Henry died. Having it in my studio makes me feel him always looking over me,” says Shanti. “Henry gave me such an artistic gift. It is true, so very true that art does indeed heal.”