For the second year in a row, some of Ocala’s most high-profile residents have spent weeks memorizing difficult dance steps and arranging costume fittings. And it’s all for a good cause—to raise much-needed funds for the Ocala Civic Theatre.

“It was the most successful one-day event we’ve ever had,” reports Britt. “Not one person left before the end.”

This year’s stars, ranging from an exercise physiologist to a lawyer, competed for the title of Ocala’s Top Female and Male Dancer, along with the coveted People’s Choice Award. Last year’s awards went to Teri Thayer, David Menard, and Frank DeLuca, respectively.

Recently, we were given a chance to chat with our local dancers and their partners about learning choreography, relieving aching muscles, braving stage fright, and raising awareness for the theater.

Here’s what they had to say. 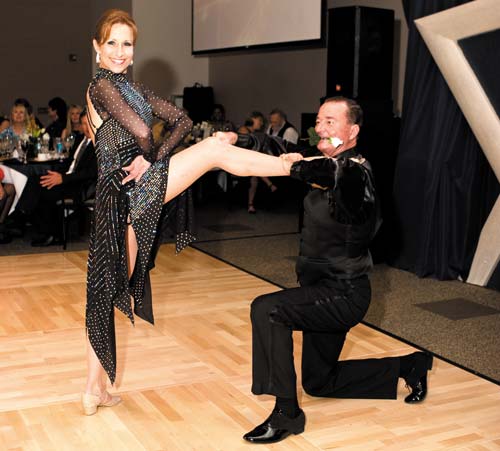 Dock decided to participate because he says it was about time he learned to really dance and the competition was for a good cause. He says he loves making a fool of himself on the dance floor and couldn’t think of a better reason to do so.

So how did his family and friends react to his participation?

“After they stopped laughing,” he recalls, “they’ve all been extremely supportive. My two daughters think it’s a hoot.

“Dancing is hard work!” Dock adds. “I never cease to be amazed at the patience of my instructor, Sharon Chantel. How she puts up with me I’ll never know.”

“He’s really doing very well,” Sharon says. “If I could just get the cell phone out of his hand.” 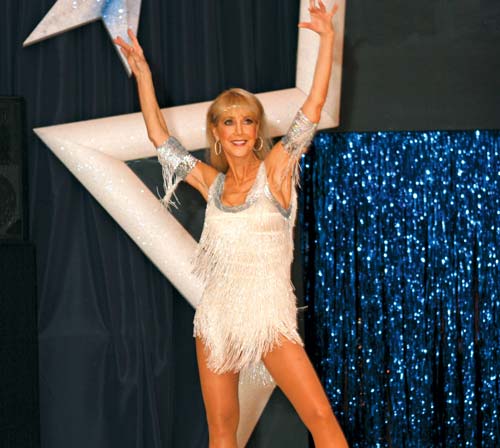 Janeen notes “remarkable similarities” between riding and ballroom dancing, including the importance of body carriage and balance. Although she took ballet, tap, and jazz lessons as a child, she says dancing with a partner is “totally different.”

“I really love dancing with Jamey, though,” she says. “He’s a spectacular instructor. I came into this venture thinking I would learn a routine, and instead I’ve learned to ballroom dance. Who knew?” 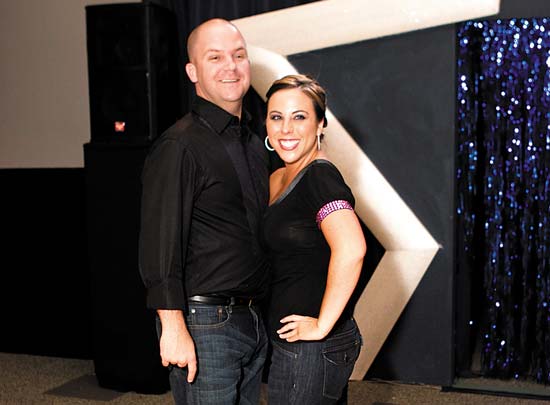 Chris says he’s dancing in the competition because, “Apparently I’m a sucker and can’t say no.”

He says his brothers laughed when he told them he was going to be a participant, his friends ridiculed him, and his wife said she was glad it was him and not her.

“Shawn is a great teacher and Corrine’s a fantastic partner,” Chris says. “I think I’m more worried about disappointing them than I am about making a fool of myself.”

He notes there isn’t a big difference between dancing and real estate development.

“As long as you act like you know what you’re doing and keep moving your feet, the mistakes seem to disappear.” 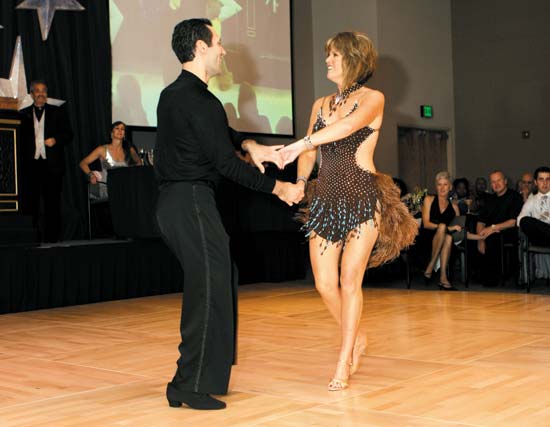 “To support a good cause and to get in shape for my 29th birthday, which is six days after the event,” she admits. “It’s working.”

She’s looking forward to the evening of the event and seeing all the smiling, friendly faces in the crowd.

Dana adds that the extent of her dance training was taking five lessons with her husband last summer. When she told her two daughters that she was going to be doing Dancing with Ocala Stars, they wanted to know when the TV show was going to air.

“Ballroom dancing is unlike most anything I’ve attempted to learn,” she notes. “It’s quite complicated. Charles makes it look so effortless and graceful—for him it’s completely natural!” 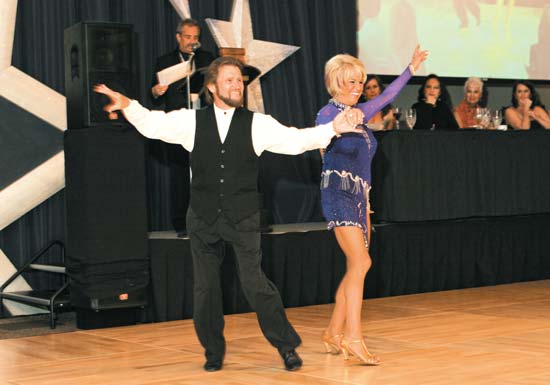 “I’m loving it,” she declares with a smile. “Too bad my two left feet are having such a hard time. My partner, Butch, is great. He’s so patient with me. No matter how many mistakes I make, he always remains calm and cool. We laugh a lot.” 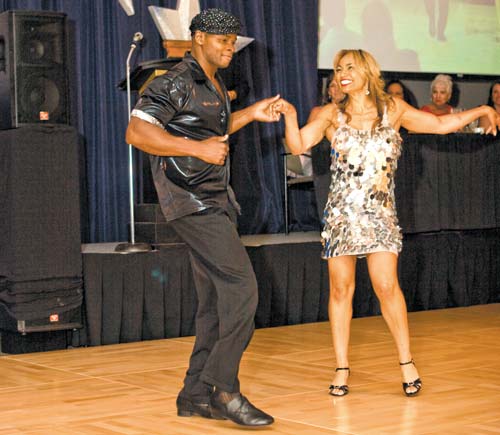 Tony’s family and friends couldn’t believe that a guy like him, a self-described “weight-lifter type,” would attempt to move smoothly with the rhythm of music.

“Of course,” he admits, “they say this laughing.”

Tony says the classes have been “fun” and his teacher is “wonderful.”

“It’s a little challenging at times, but that’s how we learn new things. It’s a great form of cardio.”

Tony says his biggest fear was missing some of the steps on the evening of the performance.

“It’s hard to know where to place both left feet,” he says. “Just let me move my feet and arms my way and then I’m fine.” 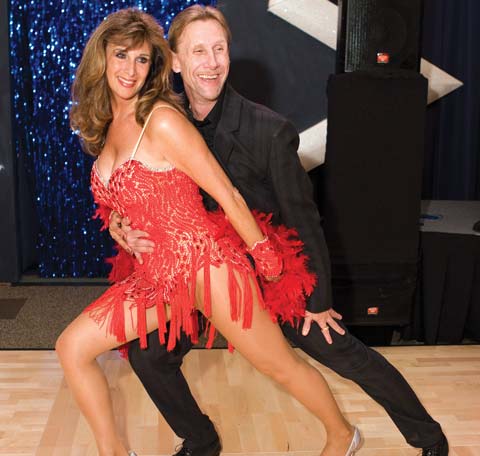 The extent of Janelle’s dance experience is the tap and ballet lessons she took when she was young.
“Dancing is like nothing I’ve ever undertaken,” she says. “Horseback riding is a piece of cake compared to dancing.”

Janelle says people may not know that she’s an introvert. “Appearing before an audience is extremely frightening to me,” she concedes.

However, she says the experience has pushed her into a new area and is getting in shape. 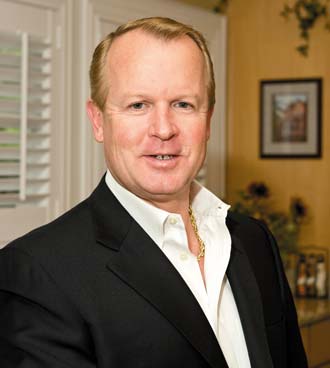 ‘A TEAM EFFORT’
Bringing Dancing With The Stars To Ocala

The Ocala businessman signed up for lessons and found he really enjoyed it. When he learned that quite a few communities were holding local Dancing with the Stars competitions to raise funds for good causes, he thought it sounded like a great idea to bring to Ocala.

Fortunately, Ralph explains, after he became a supporter and patron of the Ocala Civic Theatre, he brought up his idea with OCT Director Mary Britt. That began the chain of events that brought the idea to fruition.

The first Dancing with Ocala’s Stars was held last year and Ralph says he was very pleased with the results.

“Ocala Civic Theatre is such a great organization,” he explains. “And the dancing event is a great way to raise money.”

While he was the one who first thought about bringing Dancing with the Stars to Ocala, Ralph doesn’t feel he deserves credit for the event’s success.

“I just pitched the idea and helped recruit the dancers,” he says. “It was really a team effort.”