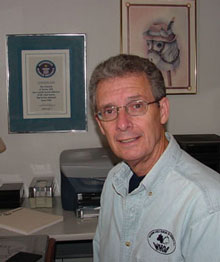 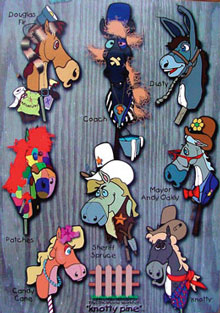 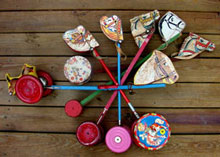 When it comes to stick horses, Dan Cavanah considers himself “a big kid.”

Fortunately, this north Florida resident hasn’t lost his youthful appreciation for old-fashioned fun and that, combined with a savvy collector’s eye, has landed him squarely in the Guinness Book of World Records.

Cavanah’s love of horses dates back to childhood. Although he didn’t have an “official” stick horse as a kid, he rode his share of brooms and mop handles before graduating to the real four-legged variety. Cavanah even rode as an extra for the television show The Virginian, which aired in the early 1960s.

A Missouri native, Cavanah spent 25 years working in Miami before moving north to Gilchrist County, hungry for open space and rural living. He settled in Bell, Florida, which is about as opposite Miami as he could find.

“I was joking with him, saying one day I’d have a bigger farm than his,” says Cavanah, who was horse-less at the time. “He shipped me this stick horse and told me that would help get my farm started!”

That was 1990. When Cavanah moved to Bell in 1995, eager to meet people in the area, he joined a riding club. Since he didn’t yet have a real horse, he unpacked “Big Grey,” and took to bringing the stick horse along in the front seat of his truck just for laughs.

“The kids all wanted to play with him and the grown-ups started talking about their stick horse memories,” says Cavanah. “It just grew from there.”

And grew and grew!

The unusual collectible comes in all shapes and sizes. There are stick horses made from wood, leather, injection-molded plastic, fabric, vinyl and metal, even some models with early examples of paper laminate. Some have ribbon reins with bells attached, while others have clackers and bells on their wheels to simulate a galloping noise. Certain models have moving parts, such as a mouth that moves when the reins are pulled. One from the late-1950s is battery operated and makes a whinnying sound.

Gong Bell Manufacturing and N.N. Hill Brass Company were primary manufacturers of stick horses in the United States, starting in the 1920s, notes Cavanah. Some stick horses in his collection still have the manufacturer’s tag attached, while many are “well ridden” and trail worn. “I think it’s so neat to look at these old stick horses and envision the children that once rode them,” he adds.

Although he has gotten stick horses from as far away as Australia, the one that really sparked the collection was discovered in 1995 in a Micanopy antiques store. Dating from the 1920s, that particular horse put him on a quest to find more.

“Everywhere I went I started looking for stick horses,” he recalls. “I would travel between Florida and Missouri to see family and stop to look in every antiques shop. In the beginning I was just looking for any kind of stick horse, but now I’m looking for something different that I don’t have in the collection.” (And no, he doesn’t have one absolute favorite!)

Cavanah’s research revealed that stick horses, sometimes called “hobby horses,” originated in Europe in the 1600s, but that similar toys were played with in ancient Roman days. Although their popularity waned in this country after the introduction of television, Cavanah says stick horses are easier to find today than when he started collecting.

Cavanah didn’t set out to establish the world’s largest stick horse collection. In 2000, he was helping an artist friend with research, which required a call to the folks at Guinness. Before he ended that conversation, Cavanah inquired, just out of curiosity, if there was a record for collecting stick horses. It turned out there wasn’t even such a category. Guinness invited him to submit, however, and two years later created the stick horse category, awarding Cavanah the world record certificate in November 2002 for having 381 stick horse pieces. As of April 2003, his collection has expanded to 440 pieces.

The collection includes not only stick horses, but a variety of figurines and memorabilia relating to stick horses, such as puzzles, antique postcards and advertisements, plates and cups, candy molds, pendants, charms, and Christmas ornaments. His oldest stick horse was made in 1926; the oldest item in his entire collection is a coin from Belgium stamped with a stick horse and dated 1650.

“I wasn’t trying to get a Guinness world record,” says Cavanah. “My whole intention from the beginning was to bring recognition to this children’s toy. It’s one of the few imagination-generating, self-propelled toys still around today with this kind of history.”

His fondness for stick horses has lead Cavanah to design some of his own models — he calls them “Whoa Buddies” — and the first line will debut this summer, available on his website and in select Western stores throughout the country.

As for the stick horse collection, Cavanah admits it’s overwhelming his house; there are literally stick horses everywhere he turns. He would like to find a museum facility where the entire nostalgic collection can be properly displayed, preserved and enjoyed by the public. Cavanah hopes to be curator of such a museum and is searching for the financial resources to make this a reality. As an alternative, he may eventually consider auctioning off the collection to the highest bidder.

For those interested in starting their own stick horse collection, Cavanah encourages them to be selective but to “buy something that appeals to you personally.” Online auction sites like Yahoo and eBay are good places to get started. Prices can range from a few dollars to hundreds. Most antiques appraisers don’t have a good idea of stick horse values, notes Cavanah, who plans on writing a collector’s guide to stick horses and also has ideas for a children’s story and activity book.

Once you’re hooked on stick horses, it’s tough — if not impossible — to get them out of your system. This much-loved toy appeals to children of all ages and adult stick horse fanciers seem to appreciate them even more than fans with ages in the single digits. Just ask Dan Cavanah if he ever rides his stick horses.

“Yes!” he replies with an enthusiastic grin.

After all, what good is having the world’s largest stick horse collection if you can’t get some old-fashioned, “big kid” fun out of it?

Cynthia McFarland never had a stick horse as a child, but since then has made up for it with the living, breathing, hay-eating, four-legged version!

In 1995, Dan Cavanah founded Woodin-stick Horses of America, Inc. (WHOA) and when he launched his website, it was virtually the only one on the Internet devoted to stick horses. WHOA’s mission was to assemble the world’s largest stick horse collection and with this milestone reached, the goal is to continue building the popularity of this early children’s toy. WHOA offers free membership to anyone around the world who shares a common interest in stick horses.

Cavanah helps organize and promote WHODEOS, stick horse rodeo events where children of all ages (“from two year olds to senior citizens”) ride their stick horses and compete for fun in classes styled after real horse shows and rodeos. It’s all based on imagination and, as one might guess, filled with lots of laughs from participants and spectators.