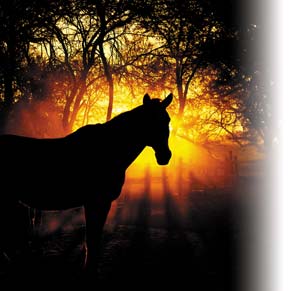 IMAGINE a state-of-the-art horse farm. Spring-like weather, over 2,000 competing horses per week, large crowds cheering from the sidelines, and more than $1 million in prize money. Sound too good to be true? It’s not. It’s the reality of the HITS Winter Circuit in Ocala. Ideally situated in north Central Florida, Ocala offers residents and visitors a little bit of everything. Sure, it’s a quick 70-mile drive to Orlando and just an hour and a half to either coast, but there’s no need to venture far from Ocala to experience Southern hospitality at its finest.

“Out of all the horse shows in the country, the HITS Ocala Winter Circuit is one of my favorites,” says HITS Corporate Sponsorship Account Executive Lisa Engel. “The atmosphere is professional, yet relaxed. The show grounds are spectacular and the majestic oaks are awe-inspiring.”

ONE LOCAL RESIDENT knows this from experience. Chris Desino, a competitive jumper and co-owner of Ocala Horse Properties (with his twin brother, Rob), first came to Ocala eight years ago. The duo quickly became the leaders in horse farm sales in Ocala.

“From the moment I came here, I was sold,” Chris says. “I decided Ocala is where I wanted to live for the rest of my life.” 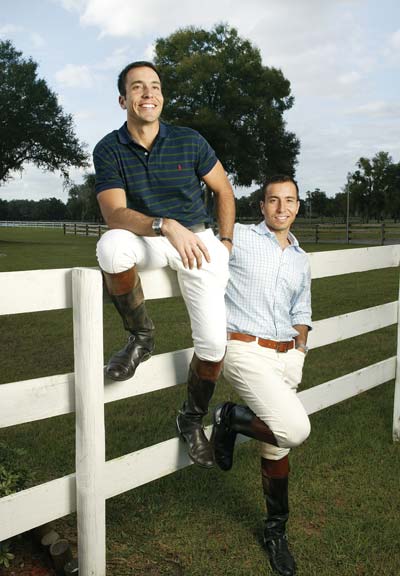 Ironically, it was HITS that originally brought Chris and his twin brother, Rob, also a competitive jumper, to the area. The brothers competed on the U.S. crew team, and were training for their spots on the Olympic team when a back injury forced Rob to quit rowing. 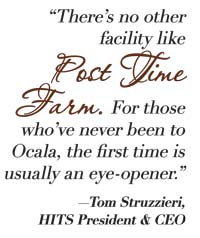 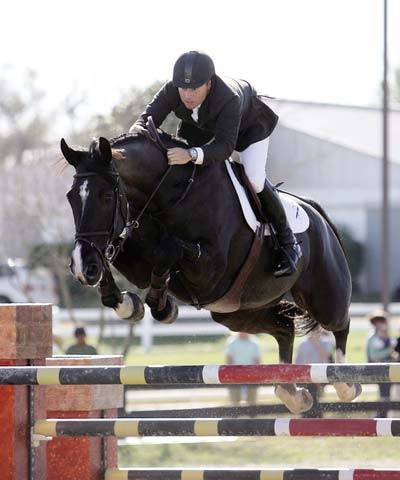 “We needed a new competitive outlet,” Chris says. “We both always loved animals and the idea of owning horses, and wanted to escape the New York winters. To fill the competitive need, we both got involved in show jumping. That switch led us to HITS, which led us to Ocala.

“What I love most about Ocala is the forgiving pace,” Chris adds. “While the horse community is re-laxed and friendly, Ocala is also filled with an abundance of culture, including many fine restaurants, shopping options, and recreational opportunities.” 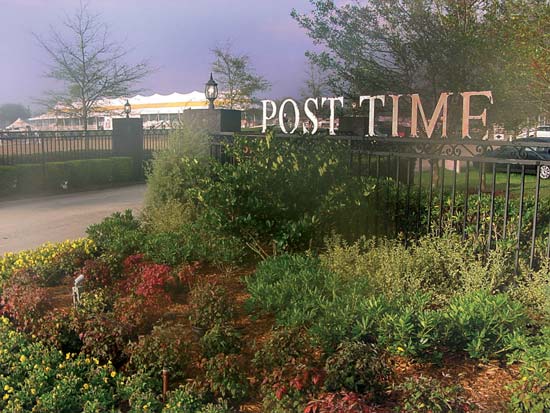 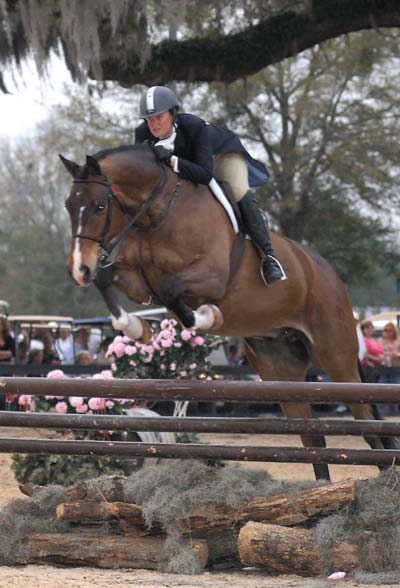 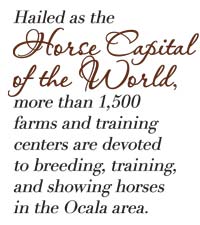 “There’s no other facility like Post Time Farm,” says HITS President and CEO Tom Struzzieri. “Not only is it our largest property in the country, it’s also the most beautiful. For those who’ve never been to Ocala, the first time is usually an eye-opener. The property is spacious and comfortable, the rings and barns are some of the best in the country, and the community that surrounds the show is a horse-focused community that supports and welcomes the horse shows.”

WHILE THE HITS SHOWS provide spectators and competitors with the many things they may need, including food and beverage services and even shopping options, the community of Ocala has an abundance of attractions just waiting to be explored for those wishing to venture away from the show grounds.

Within an easy drive of HITS Post Time Farm is the newly opened Market Square at Heathbrook, featuring such stores as Dillard’s, Old Navy, and Dick’s Sporting Goods, to name a few. Just down the road, the Paddock Mall offers shoppers additional shopping opportunities.

Restaurant Row (commonly known as SR 200) features dozens of restaurants. From seafood and steak to Thai and Italian food, there should be something to suit everyone’s tastes.

Of course, the main draw is the horses. Hailed as the Horse Capital of the World, more than 1,500 farms and training centers are devoted to breeding, training, and showing horses in the area. Breeds such as the Paso Fino, Missouri Foxtrotter, Arabian, Morgan, Miniature Horse, Quarter Horse, Thoroughbred, Hunter/Jumper, Gypsy Vanner, and the draft horse call Ocala home. Several of these farms are open for tours, and visitors who bring their own horses are free to ride Ocala’s scenic forest and Greenway trails. If desired, you could even ride from coast to coast. 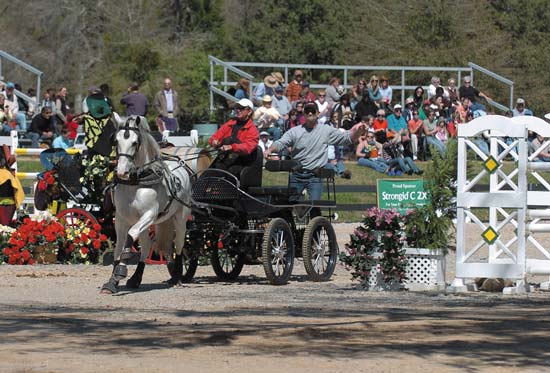 For Chris, though, being an equestrian professional in Ocala is all about the lifestyle.

“With 1,500 farms, horses are a way of life here,” he says. “It doesn’t matter who you are or what you do—everyone is accepted. There are no airs about anybody in Ocala.”

SINCE ITS INTRODUCTION in 1982, the HITS Ocala Winter Circuit has become a fixture on the East Coast show jumping circuit. Each winter, the Ocala circuit attracts national and international participants from the United States, Canada, Mexico, and Europe.

And just like in past years, this one promises to bring something new. Instead of the usual five-week, AA-competition, this year will feature a sixth week of competition and a brand new event: the Ocala Winter Celebration. The Celebration will take place the week of March 10 and will serve as the climactic end of the circuit with several championship classes, including the $100,000 DeLuca Toyota Tundra Grand Prix, presented by Great American Insurance Group.

The 2008 season at HITS Ocala saw record numbers of exhibitors and the upcoming year is predicted to do the same. One of the aspects that makes the HITS Ocala Winter Circuit so special is the fact there is competition and learning opportunities for every level of rider—from beginner to Grand Prix.

“As a company, HITS has always been committed to providing an atmosphere where everyone can participate and strive for success,” says Struzzieri. “That’s why this season HITS Ocala will offer more than 80 different divisions with more than 250 classes for riders of every level.”

As a matter of fact, there are 14 Grand Prix events throughout the eight-week circuit worth more than half a million dollars.

“Some of the top riders in the country compete in Ocala, yet the less experienced riders feel at home there, too,” says Lisa. “It is a great place to showcase talents and gain experience. There are very few venues in the country that can provide something for everyone.”

“Our focus continues to be to provide up-and-coming riders the opportunity to compete in an environment where they can enjoy the whole experience of a top-rated show, including the most varied class offerings, endless opportunities for ribbons and points, the country’s best judges, and the opportunity to show alongside today’s stars in equestrian sport,” adds Struzzieri. “After all, today’s up-and-coming riders will be the equestrian stars of tomorrow.” 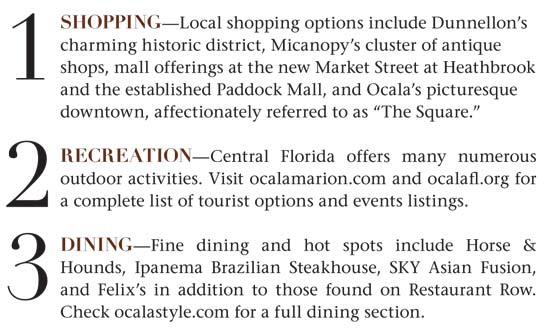