It’s hard to escape the lure of superfoods. Every natural and health food store even has a superfoods section. And you’ve probably tried a few. But do they deliver what they promise or is it just good marketing? 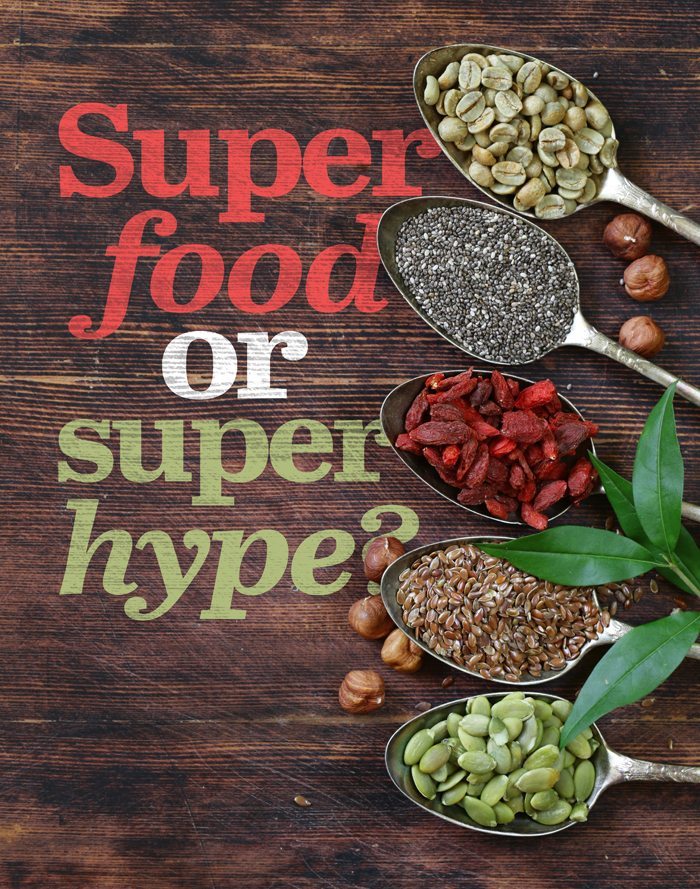 It’s hard to escape the lure of superfoods. Every natural and health food store even has a superfoods section. And you’ve probably tried a few. But do they deliver what they promise or is it just good marketing?

Seems like every year there’s a new batch of superfoods, even more super than the last. If you believe the hype, these superfoods will make you younger, sexier, faster, stronger and healthier. Well, heck, it’s not easy to pass on something that reportedly can deliver on those promises.

But what makes a food a superfood? And is there substance behind the hype?

Because the term superfood was no doubt conjured up by a savvy marketer, there isn’t any official medical definition of a superfood. What we have is a general assumption that a superfood is considered to be a nutrient-dense food, supplying loads of health-inducing antioxidants, polyphenols, vitamins and minerals.

“Most nutrition experts consider fruits, vegetables, whole grains, legumes and fatty fish to be superfoods,” says Kyle Hazen, a registered dietitian nutritionist and member of the Academy of Nutrition and Dietetics. “Whole foods, as opposed to processed foods, are healthier for us.”

But then along came someone trying to sell us a food that was a little different, a little more exotic than just a plain ol’ healthy avocado. Voilà! Let’s call it a superfood! And, just like that, a whole new food subclass was born. Say hello to acai, goji berries, quinoa, kale and kefir.

“These so-called superfoods do have good nutrients, but so do blueberries,” says Hazen. “It’s just that acai has been marketed with more hype. And people sometimes buy into the superfood marketing hype.”

And Hazen notes that “a lot of these exotic superfoods come from other countries, so it’s not feasible that you’re going to find them at your local grocery store.” Instead, they are more readily available as supplements or juices.

“There are several problems with supplements,” says Hazen. “They are not regulated, so you really don’t know what you’re getting. If there is even any of the superfood in that supplement, there are also other ingredients and fillers. So you’re spending money, sometimes a lot of money, on a supplement that may or may not be what the label says. When you buy an apple, you’re getting an apple.”

Many superfood exotic fruits, such as acai and mangosteen, are marketed as juices.

“Juices do preserve a lot of the fruit’s nutrients, so that might be a better route to go if you want to try a superfood,” says Hazen. “But with juices, you’re also getting a lot of added sugar and that’s not a good thing. So read the label and decide if the added sugar is worth it.”

“People really do want to be healthier. That’s what the marketing taps into,” he says. “And sometimes, especially if you’re trying to lose weight, taking a magic pill seems like the answer. If you’re curious and want to try a superfood, try to find it in its whole food state, not as a supplement. And be very wary, very skeptical of the health claims of a superfood.”

Here’s a look at some of the latest superfoods you might want to try—just don’t expect them to make you be able to leap tall buildings in a single  bound!

Not related to mangos, the mangosteen is a fist-sized fruit found in Southeast Asia. It has a thick purple rind and a soft white, segmented interior. The rind contains compounds called xanthones, which are reported to reduce inflammation in the body. The fruit is difficult to find in the United States, but mangosteen juice and supplements are found in natural and health food stores.

Not to be confused with brewer’s yeast, nutritional yeast is made from deactivated yeast and thus has no leavening qualities. It is reported to be a good source of protein, including all nine essential amino acids, fiber and B12. Cheesy-tasting nutritional yeast can be sprinkled on salads, pasta or popcorn or added to smoothies.

A rich, full-bodied tea with hints of mocha, pu-erh tea is fermented and aged, sometimes for decades like fine wine. Rich in polyphenols, it reportedly improves digestion and cholesterol levels. Found in loose-leaf form or compressed into little cakes called bing cha, simply add hot water to a cup and enjoy.

Nori, kelp, wake and dulse are all seaweeds that are good sources of iodine, calcium and antioxidants. Use them as sushi wraps or add to soups and salads.

Made by simmering beef or chicken bones, along with veggies or herbs, bone broth is riding a wave of popularity. In larger cities, there are even bone broth cafes. Rich in protein, bone broth is also high in calcium, phosphorous, magnesium and potassium, which reportedly helps heal your digestive system. Its collagen and gelatin content is also supposedly good for healthy hair, skin and nails. You can either make your own or look for bottled bone broth at natural and health food stores.

A hybrid of the lime and the kumquat, this nugget-sized fruit is most often found in supermarkets from July to November. Packed with vitamin C and fiber, limequats can be eaten like an apple, rind and all. You can also use it as a substitute for lemons or limes.

Move over, quinoa. A grain-like seed, amaranth is high in protein, containing all the essential amino acids. It can be added to soups because it cooks quickly. Or instead of popcorn, try popped amaranth.

A winter squash, the Hubbard squash has an orange-yellow flesh that’s rich in vitamins A and C, potassium and fiber. Try roasting them and adding to pasta, salads and stews.

Hailing from Bangladesh, Pakistan and Afghanistan, the leaves, seeds and green fruit of the moringa plant contain iron, vitamins C and B6 as well as amino acids. Moringa powder can be found in health food stores and can be added to your smoothies for a nutrient boost.

This fruit looks like a green grapefruit but tastes like a melon with a touch of citrus. Grown in Florida, California and Texas, pomelos are harvested between fall and mid-spring. They are high in fiber, potassium and antioxidants. Eat a pomelo as you would a grapefruit, separating the wedges.

A gluten-free grain, teff is the key ingredient in Ethiopian injera bread. It’s a good source of protein and vitamin C. Besides making bread with teff, try using it in pancakes or homemade granola bars.

A root vegetable, celeriac has a similar taste to celery. It’s chock-full of vitamins B6, C and K as well as magnesium and potassium. Celeriac can be eaten peeled and grated raw into salads as well as roasted then mashed into a creamy side dish.

Actually a root vegetable, tiger nuts date back to ancient Egypt, where they were eaten coated with honey. Most of today’s tiger nuts are cultivated in Africa and Spain, where they grow on the roots of the yellow nutsedge weed. They are high in prebiotic fiber, resistant starch, protein and unsaturated fats. Embraced by the Paleo diet followers, tiger nuts are found in health food stores. Most people recommend soaking them for 12-48 hours before eating.

An Ecuadorian tea, guayusa has as much caffeine as a regular cup of black coffee. It is also rich in polyphenols and chlorogenic acids, the latter of which reportedly improves blood sugar and lowers blood pressure. Check for it at your health food store, and enjoy a morning cup.

It’s a nut-like seed from a Peruvian plant of the same name. Sancha inchi is a good source of protein and omega-3 fatty acids. If you’re going to find it anywhere, it would be in a health food store. Eat them as you would sunflower seeds.