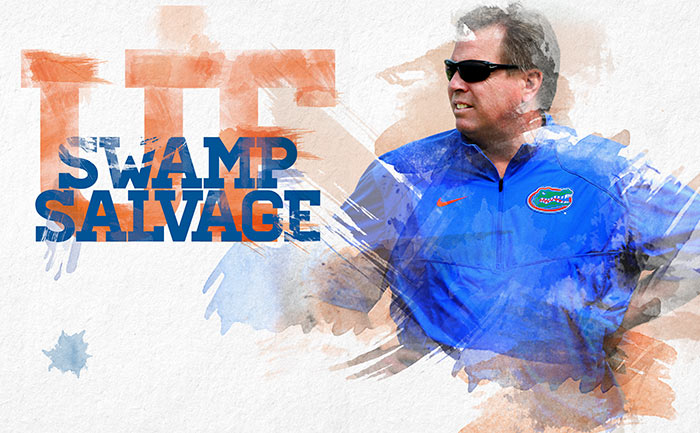 The man seems so unassuming at first glance,only the coterie of handlers and media liaisons that shepherd him from room to room belies the fact he commands uncommon respect for a person of his rather modest tenor.

This is Jim McElwain, and he is the man now responsible for parallel parking this battleship known as Florida Gator football into the tight space of a national championship, a space fans and players had been accustomed to battling for for around two decades. Now they hope McElwain to be their next Bull Halsey.

“They” would be the contingent of fans and boosters gathered to pine over every word of their new leader at one of the latest stops on the Gator Gathering trail—this one in sort of the right ventricle of the heart of Gator Country: Ocala’s Ewers Century Center.

They harbor high expectations that include Southeastern Conference titles and national championships while at the same time carry within a deep-rooted cynicism—a cynicism forged from moments that range from heartbreaking to embarrassing. Three national championships have certainly soothed but not covered the scars that remain from such ignominious moments known as “Fourth and Dumb,” “The Great Gator Flop” or “The Choke at Doak.” No matter how many consecutive victories the Gators may reel off against the hated Georgia Bulldogs, the acidic verbiage of “Run, Lindsay, Run!” will forever trump any momentary elation. 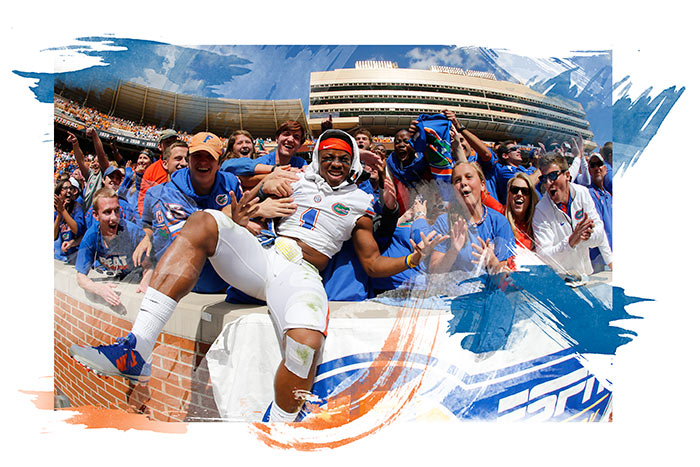 These fans expect to play for national championships while at the same time see a train wreck ahead. One hand is high-fiving a buddy while the other shines white knuckles bracing for the inevitable. The Sybil nature of this ship needs ballast in steadying the two masts known as expectation and fear.

So enter McElwain, who comes to Gainesville much the same way as Urban Meyer in 2005—taking over a juggernaut program that has failed to deliver on the field. Meyer took over from a fired newbie in Ron Zook and in his second season led the Gators to the national championship. His job was simple: corral all this mega-talent with discipline and a proven system while understanding the fundamentals of game-day planning. It brought two trophies to Gainesville.

Whereas Meyer inherited the rewards of Zook’s unquestioned recruiting abilities, McElwain steps into a situation where fired newbie Will Muschamp left an infirmary. 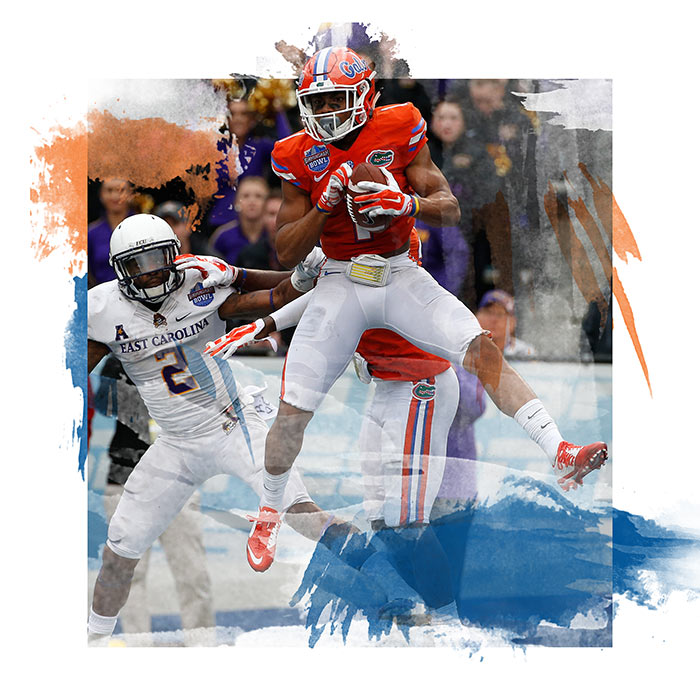 During Muschamp’s tenure that concluded with consecutive seasons of 4-8 and 7-5 records, unprecedented numbers of injuries wrought miserable offensive production. Even when healthy, though, offensive production was mediocre. Twice, Muschamp’s Gators held opponents to less than 120 yards and still lost (the only times in the last 10 years that has happened to anyone). And that is why McElwain is in Gainesville: to breathe life into an offense that once terrorized the best defenses of the SEC.

The duty roster coming out of spring practice was rather pitiful. Only six scholarship offensive linemen were healthy and only two running backs. No wide receiver coach and not much to work with at the position were one there at all.

And quarterback? Tim Tebow’s not running through that tunnel any time soon.

The Gators faithful at the Ewers Center seem to understand the predicament of their new coach. McElwain is not hailed as the Second Coming, as was Steve Spurrier in 1990 or Meyer 15 years later, but he certainly enters the scene with more respect than Zook or Muschamp, admirable fellows for sure but likely in over their heads for their first head coaching positions.

“I think we’re pretty reserved about what our expectations are for this year,” said one fan in attendance, echoing the sentiment of most in the room. “I think there’s a capital ‘P’ for potential with the ship heading in the right direction.

“The poor guy (McElwain) has been dealt a tough hand to start off. It’s going to take time and patience. It’s unrealistic to expect his offense to win the SEC right away.”

What fans expect is for McElwain to eventually bring to Gainesville what he built during his brief tenure as head coach at Colorado State and before as offensive coordinator during Alabama’s national championship run. His final season at CSU, McElwain’s offense generated 34 points per game and turned a previously unheralded quarterback in Garrett Grayson into a 4,000-yard passer.

Such coaching feats cause Gator fans to hearken back to when Steve Spurrier turned an unknown Shane Matthews into the SEC Player of the Year. McElwain groomed A.J. McCarron into a two-time national championship QB, so who’s to say he couldn’t do the same with Treon Harris? Or Will Grier?

But for McElwain, turning the ship around isn’t about the grooming of a quarterback or any other individual player for that matter. In speaking to media and fans, McElwain not once utters a single player’s name despite the heavy prodding.

Not until Kreskin joins the UF football press corps is McElwain likely to discuss an individual player by name. Perhaps it’s because the new coach is squarely focused on the team concept or maybe it’s because classes have only just begun and he hasn’t yet learned the names of his students—McElwain keeps his remarks on individuals to himself.

Fans would be happy to see touchdowns next to anyone’s name in the box score following the Muschamp era in which not a single light bulb needed changing on Ben Hill Griffin Stadium’s scoreboards. McElwain does not promise a return to Spurrier’s “Fun and Gun” era, mainly because that’s not his style, but also he understands the deficiencies he’ll be working with in his early moments with the program.

“Offensively, it’s going to be an evolution,” he says. “It doesn’t happen overnight; you’ve got to get the pieces in there.”

The pieces will be mainly those that he and his staff can bring in from the recruiting trail. At the anemic wide receiver position, only two players on the roster can boast of more than 20 career receptions—a prospect that bodes well for any up-and-comer hoping to make a mark wearing orange and blue.

“We’ve got some positions where guys have some ‘Fast Pass’ tickets,” said McElwain, opting for a Disney World metaphor. “They’re going to get on the ride real quick.”

In an abbreviated period, McElwain turned what was about to be an all-time bust of recruiting classes into a rather respectable one, albeit thin by UF’s lofty standards.

“When we went out and recruited this year, we had some major needs,” McElwain understates. “For some reason the numbers weren’t there—that’s not on the guy that was here before. Guys got injured or left early for the draft.”

The addition of Martez Ivey, arguably the top lineman recruit in the nation, could help an offensive line depleted by injuries and the departure of four NFL draft picks.

Who they’ll block for is anyone’s guess as Harris and Grier have battled for the quarterback position. Harris is more of a running play-maker and owns all the on-field experience, having replaced Jeff Driskel during last season’s demise. Grier looks more of the Garrett Grayson mold—a pure passer with decent mobility. Both players put up good numbers in a spring game that could hardly be called much more than a scrimmage.

McElwain will enjoy some pretty good running backs despite the small numbers. Kelvin Taylor, son of former Gator Great Fred, could be poised for a breakout year as the feature back if an offensive line somehow emerges. Taylor has rushed for over 1,000 yards in his career, and his 197 yards against Georgia last season has left fans salivating for more of the same.

With Taylor, Adam Lane gives the UF running game another solid option. When he rushed for 109 yards in the Gators’ bowl win over East Carolina, Lane looked like he could actually be the featured back.

Spurrier and Meyer both turned the SEC on its ear with innovation many said would not work in this league, but both proved skeptics wrong. If McElwain has any remarkable innovations in mind, he’s keeping it close to the vest but certainly hinting that some major changes are coming down the pike.

“The economist (John Maynard) Keynes had an interesting saying,” McElwain said. “He said, ‘the difficulty lies not in the new ideas but in escaping the old ones.”

So can fans look forward to some sort of Quantitative Easing or monetization of the offense for 2015?

As for the defense, McElwain simply need not destroy the only thing Muschamp built of Cadillac quality. Muschamp’s defenses were ranked among the nation’s best statistically and a treasure trove of talent remains in the secondary, including Vernon Hargreaves III, the All-American junior.

McElwain brought in Geoff Collins from Mississippi State to take over as defensive coordinator as well as Randy Shannon, the former Miami Hurricanes head coach, in order to make sure the unit does not take any steps back. Shannon’s biggest asset may be more in his connections to recruits in the rich talent pool of South Florida more so than his ability to coach up that talent.

The fans at the Ewers Center like a strong defense, but it will always be the offensive side of the ball that captures their attention.

“Having a great defense is rather comforting, and you know you have a chance in any game,” another fan at the Gathering said. “But when the offense stinks, you know you also have a chance to lose any game. Whatever happened to the days of running up the score? That’s what we want here. And to shut teams out!”

More of everything, and keep it coming! That would be the fans’ mantra, and optimism for the future exists though guarded. But perhaps no one has as much at stake with McElwain’s success as does the man who hired him—Director of Athletics Jeremy Foley.

Foley, who boasts of eight national championship coaches currently on his staff, knows success at his position hinges mainly on what happens Saturdays at the Swamp. Softball and tennis titles are nice, but they don’t make up for losses on the football field, especially to the likes of Vanderbilt and Georgia Southern.

McElwain arrives in Gainesville to revive the UF football program but also to silence Foley’s critics. For McElwain to bring Florida football back to national prominence would remind the critics of Foley’s genius that brought in a young Billy Donovan and turned Gators basketball into a national power; for McElwain to fail would simply remind the critics of Foley’s disastrous experiments with Zook and Muschamp.

Although Foley is the person who technically hired Meyer in 2004, most in Gainesville view that as a crony hire of then-president Bernie Machen. Perhaps unfairly, Foley gets no credit for the vision in bringing Meyer to UF.

“These visits with fans around the state were a lot easier when we were winning back-to-back national championships in basketball and in football,” Foley said. “I know a bunch of you are saying, ‘that’s all good, but what have you done for us lately?’ I get that.

“I understand where Gator fans come from, disappointed in where we are in football. They hated watching the football playoff, because we weren’t even a spec in the conversation.”

And whose fault is that?

“There’s one person that bears responsibility for that, and that’s me,” Foley admits. “I made some decisions that didn’t work. We’re going to get better in football.

Foley, like the contingent of fans at the Ewers Center, is not expecting a title in 2015, but the honeymoon will likely be over then. Meyer won in his second year in Gainesville, and McElwain turned CSU into a winner in year two as well, so when the 2016 season ends the jury will quit deliberating and hand down its verdict—on McElwain. And Foley.

minute of this season’s