Swan likes being the lead horse, eagerly showing the way for the six trail riders and their mounts following behind her. The 10-year-old black Tennessee Walker mare’s gaited stride is smooth and effortless as she steps lively along the sandy Ocala National Forest trail. It’s a pleasantly cool Florida day, making for happy riders and even happier horses. Swan’s mount gives her an appreciative pat on the neck and the mare seemingly prances in joy. 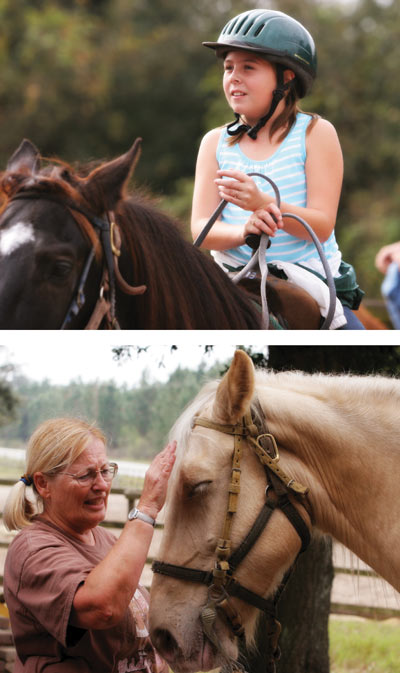 But for Swan, whose official registered name is Swan Lake, her days were not always so idyllic. Before she became a trail horse at JNB Horse Haven Farm, Swan was a show horse. Instead of spending her days carrying riders in the great outdoors, most of her time was spent training and showing. And when she wasn’t being worked relentlessly to earn her keep, Swan was locked up in a dark stall for many hours at a time. On her worst days, she never saw sunlight or heard a kind human voice. She never got to just be a horse, grazing contently in a nice pasture. She never got pats of appreciation.

And saddest of all, when Swan was no longer a top winning show horse, she was discarded, shipped off to a livestock auction and an unknown fate. With a little luck, Swan might end up in a good home. With bad luck, she could be sold for by the pound, killed, and shipped out of the country as horse meat. As it turned out, Swan had a little bit of good luck on her side and was bought by a horse dealer who hoped to retrain her as a riding horse.

It was just the beginning of her journey. 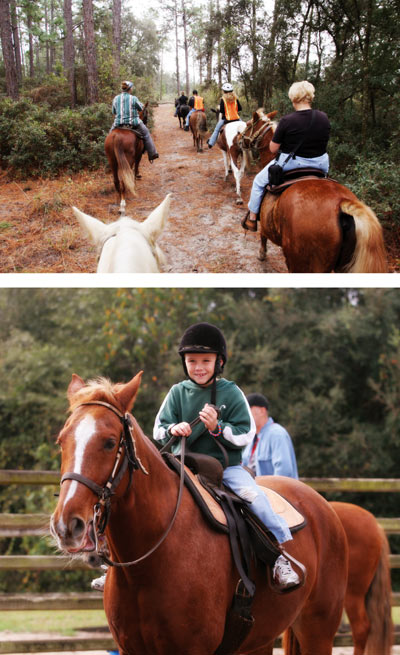 Margaret Miller has been specializing in equine vocational rehabilitation practically all her life. She was 13 when she retrained her first horse, a Thoroughbred rescued from standing in knee-deep manure in a stall for months. Named Nosey for his constant curiosity, the duo became a show-winning team for a decade. Margaret memorialized him by naming her operation after him—the acronym JNB stands for Just Nosey Boy, which she often called him when his curiosity got him into trouble.

While training, showing, and doing her equine rehab work, Margaret studied husbandry and became a certified master farrier. In 1982, the native of Long Island established JNB Horse Haven Farm in Lady Lake. Soon the word spread about Margaret and her knack with rescued horses.

In 2003, encroaching development necessitated a move to Margaret’s current 13-acre farm between Weirsdale and Altoona at the intersection of Highway 42 and Highway 452, an ideal location with the Ocala National Forest’s hundreds of miles of riding trails as a backyard. 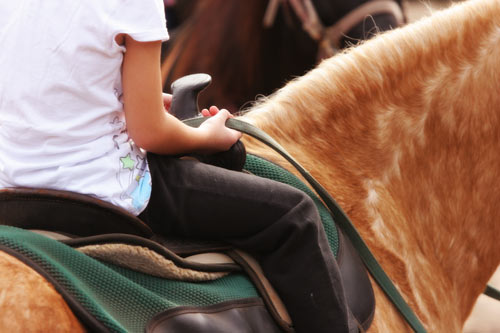 “When horses come to me, they usually have behavioral and physical problems,” says Margaret, 49, who has been riding since she was four years old. “I like to start from scratch and give the horse at least a year in rehab training. It’s very gratifying to have a traumatized horse come here and then see it progress into a happier animal with a new life.”

Such was the case with Swan.

“When the dealer who had bought Swan had no luck retraining her, he was at his wit’s end. He was going to send her back to the stockyard to be resold again,” says Margaret. “He couldn’t figure out why she’d get so spooky when he rode her off his farm. He called her a training enigma, but he really liked her and thought maybe I’d have better luck.” 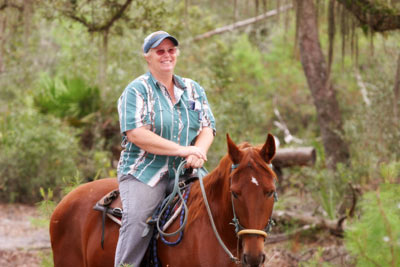 Not long after Swan arrived at JNB, Margaret figured out the enigma. Several of the farm’s paddocks border the highway and Margaret noticed that whenever Swan was turned out in those paddocks, she stayed way on the other side, away from the road. And whenever Swan was ridden, she was fine unless the rider tried to take her near the road.

“I called the dealer who had her before and asked him if he rode alongside the road,” says Margaret. “Swan was terrified of cars.”

Swan is one of 30 horses currently residing at JNB, half are used as trail horses while the rest are in various stages of rehab and retraining. Margaret and her staff, including regular volunteers, carefully match riders with the right horses. Before going out on the trails, basic horsemanship is explained in the safe environment of a corral. Guided trail rides, varying from one to two hours, go out at 9am and 11am every day, weather permitting. Customized trail rides are also available for small groups or solo riders. JNB is a permitted outfitter with the Ocala National Forest.

“We want both the riders and the horses to have an enjoyable time,” says Margaret, who gives a great flora-and-fauna class while leading trail rides. “We have people who have been riding with us for years. Many have become volunteers and bring others to enjoy the horses.” 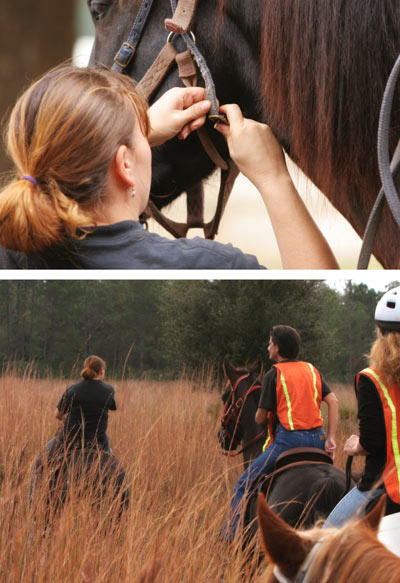 The trail-riding group that Swan led down the trail included Jack and Theresa Slifer, who were making their second visit to JNB.

“We had such a great time the first visit and we knew we’d come back,” says Theresa, who even requested Jassey, the same paint Missouri Fox Trotter that she had ridden before. “I like how Margaret and her staff take their time with you and the horses. And Jack and I like that the money we spend is going back to help other horses.”

Jack, who rode Stocks, a chestnut Tennessee Walker, nods in agreement, saying, “The horses are great and we feel good about them having new lives as trail horses.”

In addition to the horses remaining with JNB, Margaret also offers the Adopt-A-Horse Club. 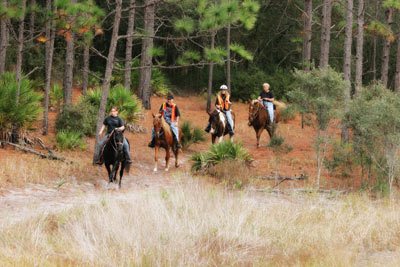 “This way the horse stays at JNB,” explains Margaret, “but people can have the experience of horsemanship. We provide education on basic horse care and riding, and those who adopt become a special friend to a horse.

“And,” she continues, “they’ll get a special friend in return.”