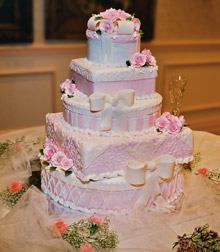 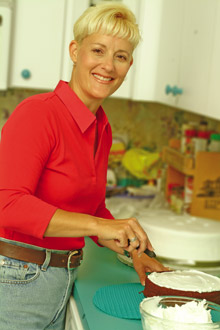 Today’s wedding cakes can come in every color, shape, size, and flavor imaginable. They can be designed to match the bride’s wedding dress, painted to coordinate with her China, or decorated with flowers, fruit, and satin ribbons. They have evolved beyond just being dessert into being a reflection of the bride’s personality. It is said that next to the bride, the wedding cake is the most photographed element of a wedding.

Those who make wedding cakes aren’t just called bakers — these days they’re called wedding cake designers. They have to be a blend of baker, artist, and — just for good measure — part psychologist and architect. The wedding cake designer not only has to deal with the bride, but also has to co-ordinate with the caterer, the florists, the photographer, and the manager of the reception site. It’s a daunting position that takes a unique person.


If necessity is indeed the mother of invention, then it was need combined with an artistic nature that led Lisa Menz to become a wedding cake designer. A horse-crazy kid, Lisa first used her artistic abilities to draw and paint pictures of horses. Later, horses would become her profession as she trained and showed various breeds in all the disciplines. It was while planning her own wedding eight years ago in the Port Charlotte area that Lisa stumbled upon a new vocation.

“I wanted a wedding cake that would be really different and unique,” says Lisa. “But at the time, I just couldn’t find someone who could do what I wanted. So I started investigating the wedding cake business and the artistic aspects really appealed to me.”

She started taking classes, studying, going to seminars, practicing and practicing, getting certified and licensed, and soon Ocala-based Cakes by Lisa was born. Cake by cake, her reputation grew until she is now in high demand during the peak spring-summer wedding season. So much so that she has wedding cake orders already placed for 2005.

“The wedding cake is more than just a table decoration,” says Lisa, who also teaches cake-designing classes at Central Florida Community College. “It’s a reflection of the bride’s personality. This is one of the biggest days in a woman’s life and she wants everything to be beautiful and perfect.”

To ensure that her role in the big day is a positive one, Lisa focuses on the details. Average price of a custom-designed wedding cake can range from $300-$500 to upwards of $1,000. Lisa also adds pages of notes to each wedding cake order.

“I try to be as thorough as possible from the beginning, so that when I’m ready to design it all just flows together,” she says.

Since most weddings are on Saturdays, Lisa’s work schedule is as follows: bake on Thursday, design on Friday, and deliver on the wedding day. A one-woman operation, Lisa keeps her orders to a reasonable number so she can give each cake her utmost personal best.

“I want the bride to be delighted with the cake, and I want to be proud of it, too.”

Lisa recently allowed Ocala Style to observe her while she designed a five-tier, elaborate pink and white wedding cake, complemented by all edible flowers and bows. She dubbed it “Pink Elegance.”

Designing a five-tier cake is somewhat akin to building a scaled-down version of a five-story house. You start with the foundation, make sure it has adequate support, and very carefully add on each story, uh, tier. And in this case, you have to be both the builder and the interior/exterior designer. Kind of a marriage of style and substance. And, oh, it has to taste good, too. A taste test of one of Lisa’s sample cakes (for the sake of the story, of course) revealed it to be moist and flavorful.

“I aim for the inside to taste as good as the outside looks,” says Lisa. “Even if it’s a beautiful cake, people will remember what it tasted like.”

• an 18-inch round strawberry-flavored base

• a 12-inch strawberry round

• a 6-inch French vanilla round

But keep in mind that each tier is actually a two-layer cake in itself with alternating fillings of chocolate and butter cream. That means for a five-tier cake, Lisa has to bake 10 individual cakes. She inserts small plastic dowels into each tier for added support as the cake begins to take shape.

Each tier then must be designed and decorated individually with lattice, lace work, appliqués, borders, flowers, and bows. It is meticulous, methodical work. The average decorating time is an hour — per tier.

Lisa’s canvas and medium is her special-recipe butter cream icing, of which she’ll use 10 gallons on a cake like Pink Elegance.

“I like the texture of it,” she points out. “It’s multi-purpose; it holds up well during the reception; and it tastes good.”

Lisa generally uses butter cream for her lattice and lace designs, and then switches to fondant and gumpaste for ribbons and bows. Fondant is a sugar icing of medium consistency that can be molded into different shapes. Gumpaste is a harder sugar confection best used for flowers and bows. Both, of course, are edible. Lisa also has a special printer that uses edible ink. She utilizes it to make delicate, detailed decorations like butterflies that look like they could flutter away any moment.

While some very large wedding cakes are assembled at the reception site, Pink Elegance will be delivered all ready to take center stage — but not upstage the bride — on the wedding day. And sometimes with one this size, Lisa is actually hired to slice and serve the cake.

“It’s very gratifying to see a wedding cake come to life,” says Lisa, eight hours later when Pink Elegance is done. “And I love the bride’s reaction when she sees it. It’s nice to think that one of my cakes was such an important part of a beautiful, special day.”

What About The Groom?

The poor groom. Most of the time he must feel like an innocent bystander to all of the chaos surrounding the wedding plans. After all, it’s his wedding, too.

If he feels compelled to join the production, there is the groom’s cake. Like the bride stamps the wedding cake with her personality, here’s his chance to do the same.

“Most groom’s cakes have sports themes like hunting, fishing, or golf,” says Lisa. “But probably the most popular theme for a groom’s cake is NASCAR. Usually the groom will want a cake designed like his favorite NASCAR driver.”

Groom’s cakes are more common in the south and Lisa reports that she does groom’s cakes about 40% of the time. While not as elaborate or large as the wedding cake, the designing of the groom’s cake can be just as time-consuming.

“Again, you want a cake that the groom is proud of and can show off to his buddies,” says Lisa. “I usually have a lot of fun designing groom’s cakes.”

The groom’s cake can also come in many shapes and flavors, but generally they are liquor-soaked fruit or chocolate cakes. Also the groom’s cake is usually set up at a different table at the reception or is sometimes served at the rehearsal dinner instead.

There is also a little bit of history attached to the groom’s cake. The story is that if a single woman who attended a wedding took home a slice of the groom’s cake and put it under her pillow, she would dream of the man she would marry.

Everything has a history. Even the wedding cake.

And as histories go, this is a strange one. Are you ready for this? The predecessors of the modern wedding cake were first thrown at and then later broken over the head of the bride. Easy to see why these rituals didn’t become traditions still practiced today.

According to the book, Panati’s Extraordinary Origins of Everyday Things by Charles Panati, the European origins of the wedding cake trace back to grains of wheat being thrown at the bride. This was done because wheat was considered a symbol of prosperity and fertility. It was the Romans who began baking the wheat into bread loaves, which were broken over the bride’s head by the groom. The couple and the guests then ate the crumbs, supposedly for good luck.

Maybe because there weren’t enough crumbs to go around, English wedding guests in the Middle Ages were encouraged to bring additional wheat cakes to the ceremony. These were stacked up in a pile – again a symbol of future prosperity – and the bride and groom had to kiss over it before everyone got to eat the cakes.

Leave it to the flamboyant French, known as lovers of good food, to remedy this situation. Lore has it that a French chef took one of these piles of wheat cakes and created the first multi-tiered, icing-covered wedding cake.

This became the prototype for the traditional white, three-tiers with columns, bride and groom figurines perched on top wedding cake. And for most people, that is still the mental picture they conjure up when they think of a wedding cake. But, my, how the wedding cake has changed.