Hearing about the 61st Annual Florida Folk Festival made us wonder about local musicians who play old-time instruments. The roots of folk music still run deep in Central Florida, as evidenced by these musicians who entertain themselves with tunes from bygone eras. 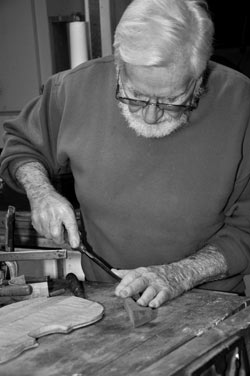 Larry Schorfhaar is known more for making handcrafted musical instruments than he is for playing them, but he is a musician first. Rest assured, if he makes it, he can play it.

“I can play almost anything with strings,” says Schorfhaar, who has a drawer full of ‘Best in Show’ ribbons for the instruments he has exhibited at Ocala’s FAFO festival. “As I built an instrument, I would learn to play it.”

The 300 instruments he has made from all types of wood are indeed works of art. His fiddles, guitars, banjos, hammer and mountain dulcimers, mandolins and autoharps have landed in the hands of musicians around the country, including Tammy Murray, fiddle player for the Gainesville-based folk band “Patchwork.”

“I purchased one of Larry’s fiddles at a festival in McIntosh,” says Murray, who will be performing at this year’s Florida Folk Festival. “I was impressed with the quality and his creative use  of woods.”

A desire for his own guitar in 1957 was Schorfhaar’s first catalyst to build instruments.

“My brother taught me how to play his guitar, but I couldn’t afford to buy my own,” he remembers. “So I built one. I made mistakes, but I learned from them.”

Woodworking came naturally, and Schorfhaar spent most of his career as a finishing carpenter for custom-built homes. During the mid-1970s, he began making musical instruments again as the building industry started using more mass-produced  wood finishes.

“I had to have another way to express myself creatively,” he says with a smile. “I read about dulcimers in the Foxfire Book about Appalachian culture, and I  wanted one.”

“I have a musical ear or what they call comparative pitch,” he says. “I can tell when I’m right  or wrong.”

He explains that sheet music was actually written for people who couldn’t play by ear. Many old-time musicians play by ear, and it’s that type of music that Schorfhaar and his wife of 62 years, Boots, enjoy the most. He keeps his favorite instrument, a hammer dulcimer, set up near the kitchen where he can stop and play a few notes whenever the mood strikes.

Younger generations may not remember Schorfhaar’s favorite songs—“Turkey in the Straw,” “Sugar in the Ground” and “Soldier’s Joy”—but the distinctive sounds from mountain and hammer dulcimers are heard in many of today’s popular tunes. The Rolling Stones, Aerosmith, Cyndi Lauper, Joni Mitchell and Nine Inch Nails, among others, have all used dulcimers in their recordings.

Today, Schorfhaar and his wife are surrounded by books, music and his instruments in their northeast Ocala home. A few steps outside the backdoor is Schorfhaar’s workshop where instrument-making magic begins. On a table near the doorway, an outline of a guitar is emerging. On a sawdust-filled workbench, a hand-carved scroll is only days away from being attached to a fiddle’s peg box and neck. Schorfhaar estimates it takes about 200 hours to build a fiddle or “at least several weeks.”

One of his most beautiful creations is a violin inspired by the movie The Red Violin. The European maple instrument is exquisite, but Schorfhaar modestly says he’s not yet created a  perfect piece.

When he’s not restoring old instruments or building new ones, Schorfhaar often walks in the woods to get his inspiration from nature—the only perfect creation he knows. 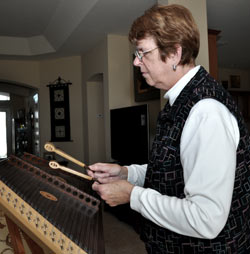 The first time Renee Moore heard a hammer dulcimer being played at a folk festival she says the music grabbed her soul. The instrument has been used in religious celebrations since the Middle Ages with its sounds closely resembling those from a psaltery or harp. Even the name dulcimer is derived from the Latin (dulce) and Greek (melos) words meaning  “sweet music.”

“About the only thing the mountain dulcimer and hammer dulcimers have in common is the name,” explains Moore. “The two instruments differ in form, sound and by the way they are played.” The hammer dulcimer roots back thousands of years from instruments in Asia and Europe. The strings on the trapezoid-shaped instrument are struck with mallets, creating sounds much different from those of a mountain or lap dulcimer on which the strings are plucked. Nevertheless, both instruments are frequently heard at folk festivals like the one Moore attended in the early 1990s with her father.

“My father played the guitar when I was growing up, and those were special times when we’d all sing together,” she remembers. “After my mom died, I took dad to a folk festival in Indianapolis, and it was the first time I saw him smile and laugh in three years.”

The toe-tapping music inspired the Indiana native to buy her own hammer dulcimer, and shortly afterward, her father bought one. Moore did not have any musical training, but quickly learned to play by ear. She and her father traveled to several dulcimer and folk festivals where they studied with folk musicians like Cathy Barton, whom Moore described as “giving me the gift  of music.”

The former elementary school religion teacher also took the instrument to her classes hoping to inspire her students.

“I wanted the music to get into their hearts,” she says. “Former students often told me they remembered the music from  my classes.”

Today, Moore plays a hammer dulcimer with the Mountain Music Club in The Villages, where she’s lived for a year. She plays all types of music, including Celtic, waltzes and jazz, but old-time fiddle tunes are her favorites because “you can add your own embellishments.”

And just like she has almost every year since 1994, she’ll be attending Kentucky Music Week in Bardstown in June where she reconnects with folk musicians from around the country who have become friends over the years.

But it’s the music from the wooden box with strings that draws her to folk festivals around the country. “This instrument continues to speak to my soul,”  she says. 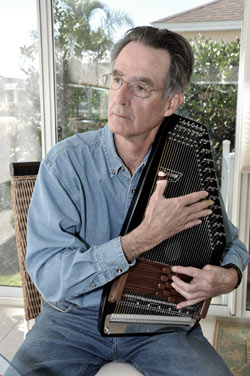 Music has always been a part of Randy Smith’s life.He was trained as a classical musician and played the oboe for the U.S. Navy Band from 1968 to 1972 and later for community orchestras. His wife, Christine, was a flute professor at Western Michigan University before the couple moved to The Villages in 2009.

After retiring from an accounting and finance career, Smith had more time to pursue his interest in music, but he had  one condition:

“I didn’t want to play anything that required a reed,” says Smith. “If you’ve ever played a woodwind instrument, you know how often you have to replace reeds.”

When he went to listen to music at the Mountain Music Club in The Villages, he was fascinated by the mountain dulcimers, also known as lap dulcimers. He picked one up and was amazed at the ease of picking chords and melodies.

“There’s music in this box,”  he remembers saying to himself.

He mentioned the club meeting to his brother back in Oklahoma City who had a dulcimer that had never  been played.

“He bought it in Branson because it ‘looked neat’,” says Smith, “and he offered to send it to me.”

As his nature, Smith began reading and studying everything he could about the instrument that has been an integral part of Appalachian music since the 1800s. He attended a dulcimer workshop in Mount Dora, where he learned that dulcimers are used not just for mountain music but for all kinds of music, including Bach, Scott Joplin’s ragtime, Irish music and more.

“I’m constantly fascinated by the huge range of styles,” Smith says. “I wake up wondering if I can play a particular tune I’ve  heard somewhere.”

And it’s not just tunes on a dulcimer that he plays now. Smith is also proficient on a hammer dulcimer, an autoharp and a penny whistle—an instrument known for the haunting sound in the theme music for the movie Titanic.He also has a second lap dulcimer that he uses when he wants a  baritone sound.

Although he had a musical background, Smith says anyone can learn to play folk instruments.

“There’s no right or wrong way to play,” he says. “If you have the imagination, you can  play anything.” 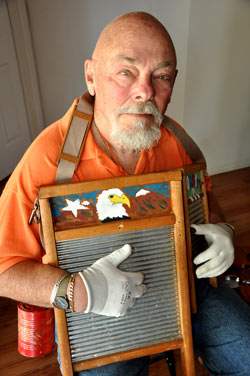 Strangers often laugh when Larry Eidelberg tells them he plays the washboard and spoons for the Mountain Music Club. After all, those are more commonly thought of as household items, not  musical instruments.

But in the North Carolina mountains where Eidelberg learned to play, washboards and spoons served as crucial percussion instruments to families making their own kind of music. Washboards are still used in mountain and bluegrass music as well as by Cajun and jug bands and are played primarily by tapping and scraping the washboard with thimbles—as in sewing thimbles. Playing the spoons originated in Ireland, but the castanet-sounds are heard in all types of music ranging from Turkish and Russian ethnic songs to American and Irish folk ballads. Washboards and spoons intended as musical instruments are now made commercially, but Eidelberg enjoys his own invention.

“I made my own old-time musical washboard by putting together two of them for resonation,” he explains. “I put pennies in gloves to replace the sounds made by thimbles. I even have a tin can mounted to the washboard that is used as  a cymbal.”

The tunes coming from an Appalachian bluegrass band that played every weekend in a flea market near Eidelberg’s Murphy, North Carolina, cabin attracted his attention seven years ago.

“I just went down to listen to them, and one day, they invited me to play,” he remembers. “They accepted me—and the fact that I had no musical training. Now I play every Saturday and Sunday when I’m in Murphy.”

Eidelberg says neither he nor anyone in his family had any musical training growing up, but he always liked to whistle and today uses his whistling abilities when playing the spoons. He also learned to follow banjo players,  no small feat as banjo picking  can get quite fast in most  bluegrass numbers.

“The hardest part is keeping the beat with other people,” he explains. “You can really throw the other musicians off if you are not on the right beat.”