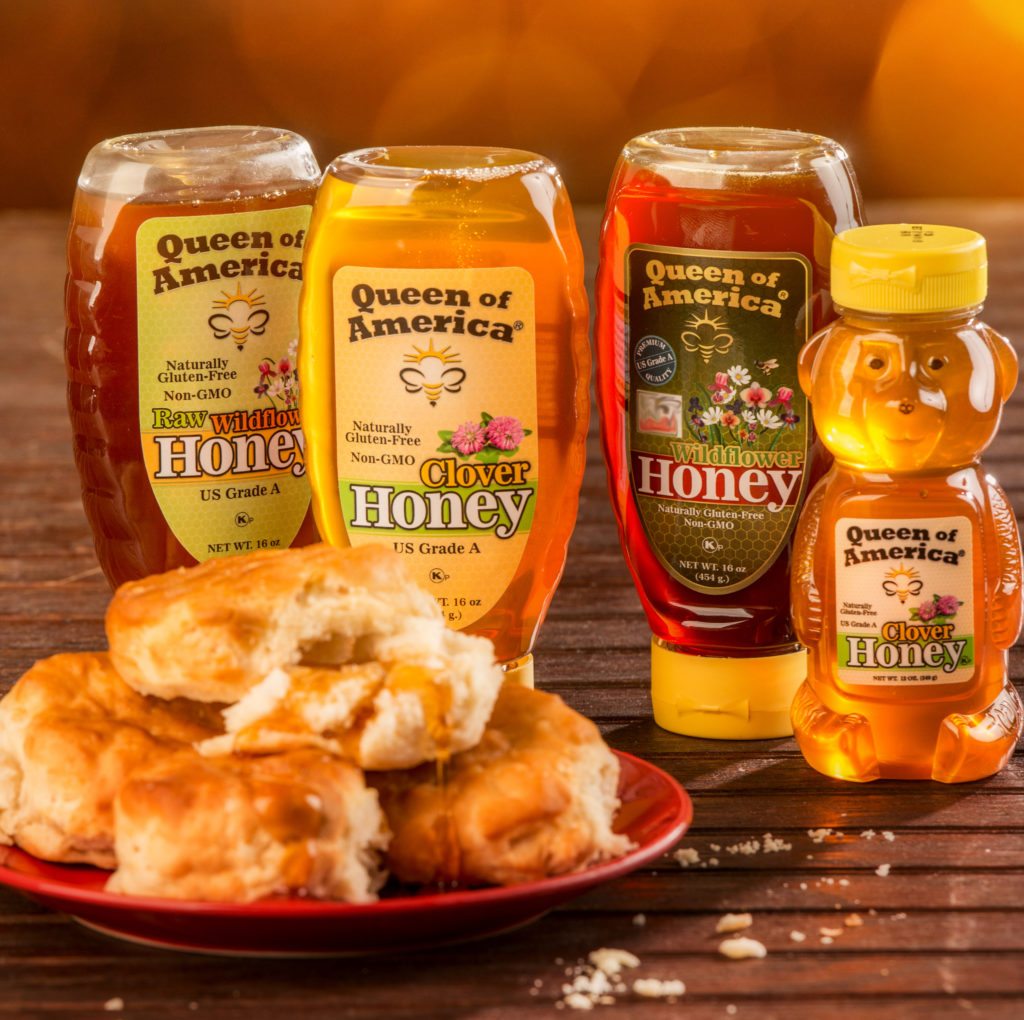 Queen of America may be a fledgling in the honey industry, having just launched in 2015, but this thriving young business has already established a substantial foothold in North America.

As the largest bulk packer of honey in the southeastern United States, the Belleview-based company has rapidly grown from five to 30 employees who annually pack and ship as much as 50 million pounds of honey all over the world.

This is good news for regional business, but more than that, it’s great news for honey bees, which we desperately need. The efforts of these industrious insects contribute almost $20 billion annually to the value of crop production in the United States. Some crops—think blueberries and cherries—are 90 percent dependent upon pollination by honey bees. At bloom time, almonds depend solely on honey bees for pollination.

But as you’ve probably heard, those bees are in trouble.

Varroa mites, which Mantovani describes as the beekeeper’s enemy, are tiny parasites that attach to the bee’s body, sucking its hemolymph (the fluid in invertebrates similar to blood). Indigenous to the Asian continent, varroa mites have now spread to Europe, North and South America, and North and South Africa. Serious infestations can destroy entire bee colonies.

Colony collapse disorder (CCD) occurs when a colony has a live queen, but no surviving adult bees, although immature bees may be present. CCD has been responsible for 33 percent to as much as 90 percent of beekeepers’ losses in recent years.

While varroa mites and CCD are problems that have natural causes, one major cause of honey bee mortality rests totally in human hands: the use of neonicotinoid pesticides.

These water-soluble insecticides are applied to the soil and then absorbed by plants, making them deadly to insects—including bees—that feed on those plants. Because worker bees bring the pollen and nectar they collect back to the hive, they can also bring toxins into the hive—and the honey—and eventually into the humans who eat that honey.

Neonicotinoid pesticides are typically applied to cropland by farmers, but many homeowners also unwittingly contribute to the destruction of honey bees.

“People use Roundup like it’s nothing, but we’re polluting our ground and water with it—and Roundup kills bees,” says Mantovani. “It doesn’t even cross their minds that what they spray in their yards can be hurting the honey bee population.”

For fear of getting stung, people often kill bees buzzing around their yards. Unlike mosquitoes, bees are vegetarians, so even if one lands on you, it’s not looking for food. Bees can, however, smell the pheromones connected with fear, which may trigger them to sting.

Your best bet is simply avoidance. In their ongoing search for pollen and nectar, bees are naturally attracted to concentrated clumps of flowering plants, so stay away from those areas when bees are active. Teach your children to respect bees and do the same.

The plight of the honey bee and the opportunity to make a real difference lured Mantovani, a native of Argentina, to leave a successful career as a hotelier in Miami and come to Marion County when Queen of America launched three years ago. He began working in logistics and eventually took over the reins of the company as CEO. 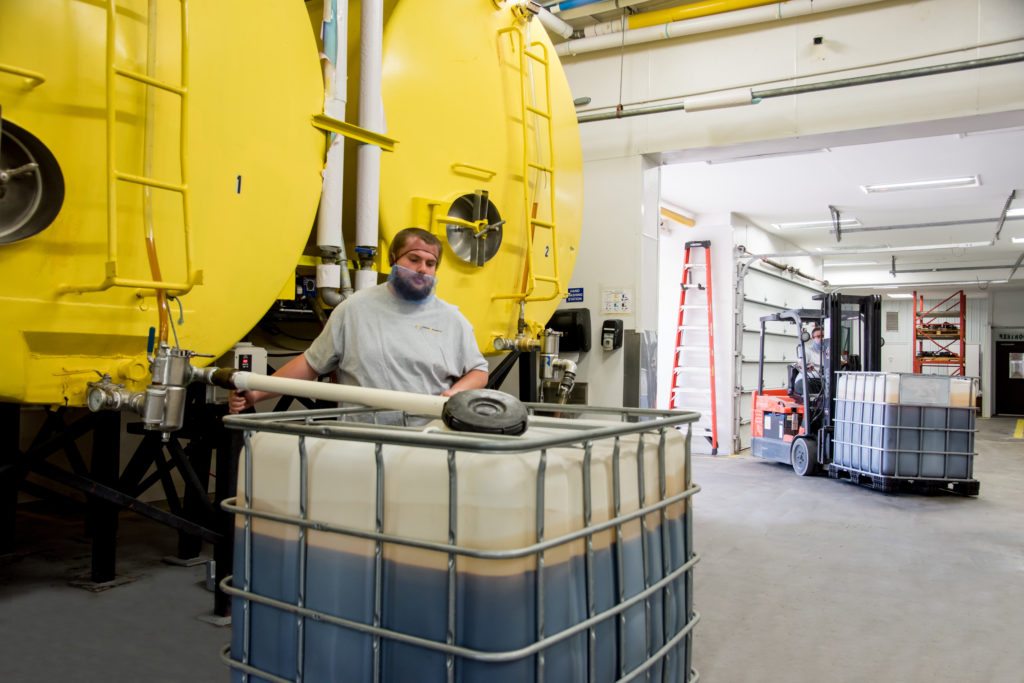 The 20-acre facility, which is located on Highway 484 in the southernmost part of the county, had been a honey-packing plant in the past. After purchasing the operation, Queen of America completely renovated and remodeled the facility.

When raw honey arrives on semi-trucks, it comes in 55-gallon drums. Before packing, honey is poured into large vats where it is heated to about 100°F. This liquefies the honey, which is then filtered through metal strainers to remove any pieces of comb and bee parts. That’s the extent of the processing. Honey is then packaged into the popular “honey bear” bottles and larger containers for retail and wholesale markets.

There’s one important distinction that sets Queen of America apart from other bulk honey packing operations.

“We’re different in that we don’t just ship honey. We’re the beekeepers, importers, exporters and packers. We have the entire supply chain, which means total traceability. We’re the only honey packer in the United States that can say this,” notes Mantovani.

He explains that other packing companies may buy honey from brokers and sources they don’t know personally, so there’s no way of tracing where the honey comes from. Because honey is a food that is easily contaminated, knowing your source adds vital credibility.

Honey ranks as one of the most commonly tainted food products.

Even more alarming are the reports of honey manufactured in China and found to contain illegal antibiotics and heavy metals, including lead. When the United States imposed tariffs, some Chinese honey manufacturers shipped their products to other countries, including India and the Philippines. Thus, the labels would not state China as the country of origin, which was a direct deception of consumers.

According to Food Safety News, which conducted its own testing, a third of all “phony honey” was imported from Asia and was contaminated with lead and antibiotics. On the positive side, samples tested from farmers markets and whole food stores, including Trader Joe’s, found that honey was authentic.

As a consumer, look for words like “pure,” “untreated” and “natural” on honey labels. Buying from local beekeepers and trusted packers not only supports area industry but ensures you are getting an unadulterated product. 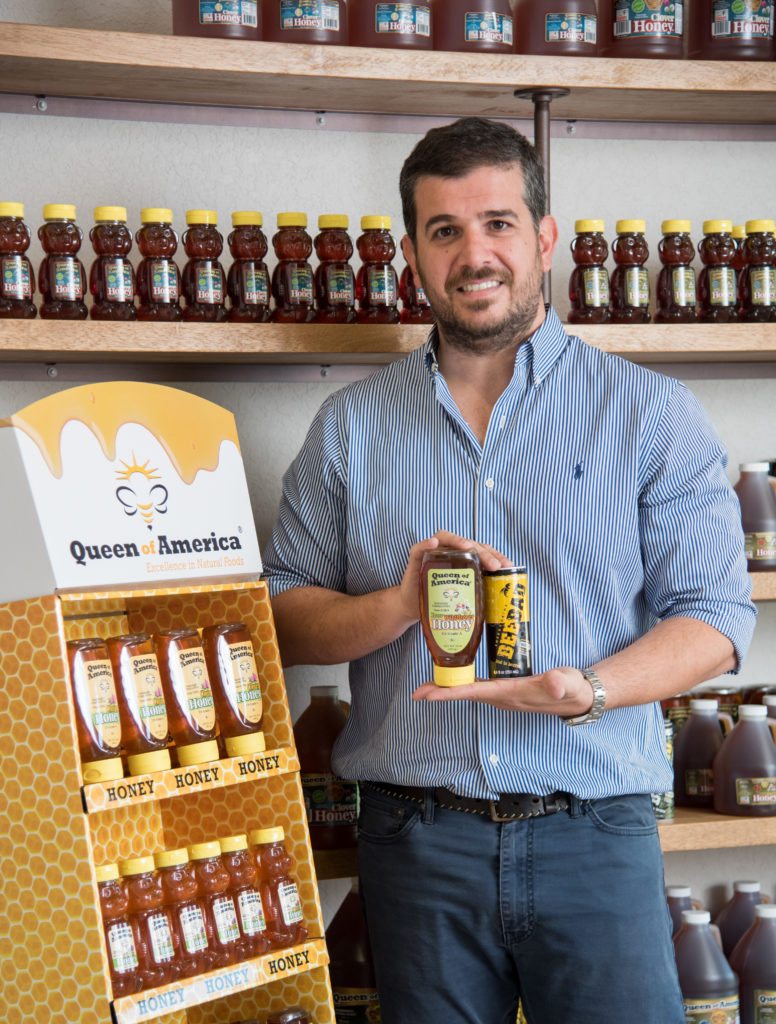 “Trust between the honey packer and the consumer is a big deal. We started this company with the concept that buying from Queen of America is like buying directly from the beekeeper, because we are beekeepers. Food safety is so important to us that we wanted to own the whole chain of supply,” explains Mantovani, noting that Florida is second only to California in terms of honey production.

Although the company contracts with beekeepers, it also owns its own hives, which are located across Florida and the southeastern United States.

“The honey industry needed a company like this,” says Mantovani. “Food safety was the No. 1 reason we started the company, but the second reason is that Florida beekeepers need a hub, somewhere they can meet, buy supplies and hives, and learn.”

Queen of America is dedicated to increasing bee awareness and educating the community about bees and offers a free club that meets each month where people can learn about beekeeping.

“It’s really ‘Beekeeping 101,’ and there’s a lot of interest. Over 30 people showed up for the first meeting,” says Mantovani, noting that the club meets on the second Tuesday of each month from 7 to 9pm. (For more information email beeclub@queenofamerica.com.)

Anyone can walk into Queen of America and buy a bottle of honey, but most of their business comes through sales to major retailers and stores across the country. Some of those stores want honey with their own label, so the company also does a lot of “co-packing.”

Now generating millions of dollars in revenue in a highly competitive industry, Queen of America is a serious success story right here in our town.

“Ocala is a puppy with sharp teeth—small but powerful in growth,” says Mantovani. “We’re always looking forward, projecting growth and stimulating the economy.”

In addition to honey, Queen of America manufactures and markets BEEBAD, its own all-natural energy drink. BEEBAD has no refined sugars and is powered by honey, royal jelly, propolis, maca, ginseng extracts and caffeine.

“There are honey snack bars, cereals and such, so our team came up with the idea of a honey energy drink,” says Mantovani. “Because it’s all natural, there are none of the negative side effects associated with energy drinks. It contains no sugar or artificial ingredients; honey is the only sweetener.”

“Bad is Better” is the slogan for BEEBAD, which hit the market in late 2016.

“Ocala was the launch city for BEEBAD, and it’s been very successful,” says Mantovani. “Over 600 stores in Ocala carry it now. People are loving it, and sales are increasing. All the ABC Liquor stores in Florida now have it.”

At the end of the day, honey remains the most trusted ingredient for sweetening. As more and more consumers move toward natural and organic food, honey is sure to become even more in demand.

To meet that need, consumers and beekeepers alike need to do everything in their power to protect honey bees. The folks at Queen of America are doing their part.

“Before I got involved in the industry, I never knew how much bees are needed in everyday life,” says Mantovani. “They pollinate so many of our fruits and vegetables. We need to save them.”

Do Your Part to Protect Bees