Local chefs mix it up in their own kitchens. 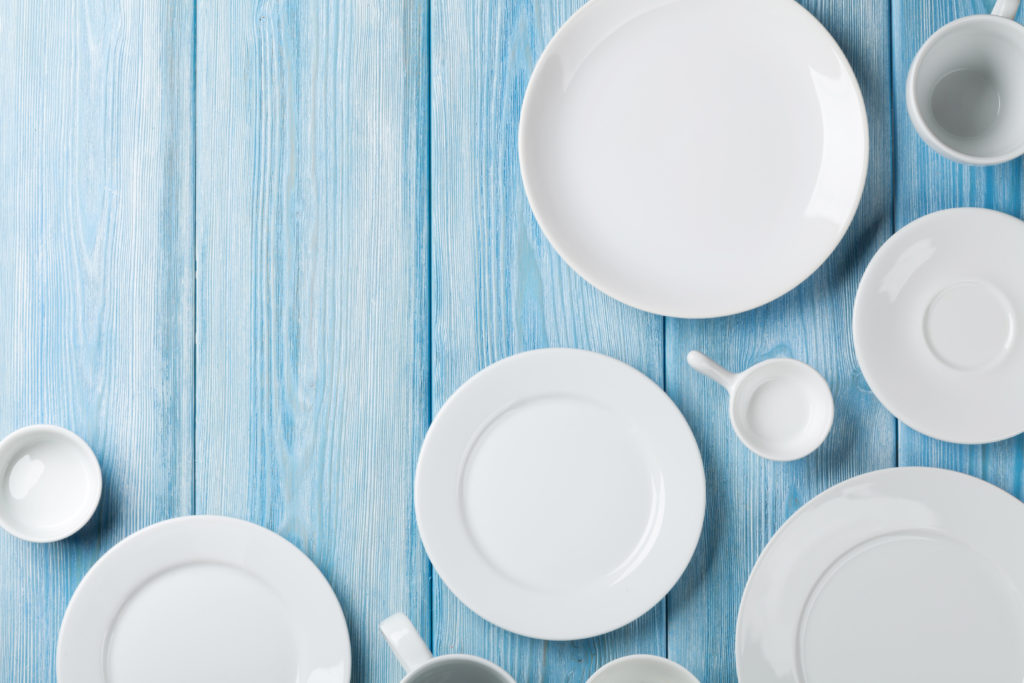 When someone loves cooking enough to make it a career, that passion doesn’t end when they come home.

We talked to four local chefs to find out how their careers began, what staples they always have on hand and their favorite kitchen tools. We even got them to share a recipe they enjoy cooking for their own families. Pull up a chair and enjoy. 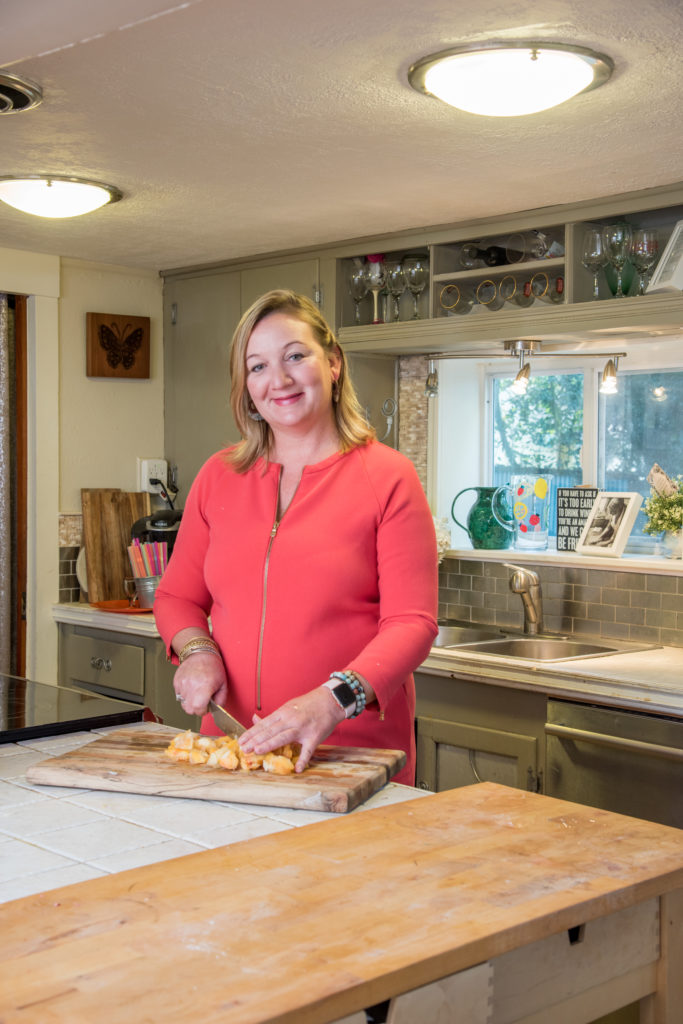 “I first realized I loved to cook while doing so for friends in college,” Patti Moring reflects. “I was far from home, and it wasn’t always possible to go home for every holiday. My father, who worked for General Foods for 45 years, inspired me to go into the food business.”

This self-taught chef has her Bachelor of Arts in English and communications but has been in the food business since she was 15 years old, starting behind the counter of a small Italian bakery in New Jersey.

“Throughout the past 30 years I have been on all sides of this business (serving, management and eight years in the corporate world as an assistant to the president of a large food group), and I have found that my favorite place to be is at my ‘cooking’ table in the hot kitchen with my staff,” says Patti.

Open her fridge and you’ll always find eggs, butter, cheeses, onions, garlic, a pitcher of water, milk, wine and herbs that have gone bad. In the pantry, there are always sprinkles for ice cream sundaes.

“We can always use sprinkles in our lives,” she laughs.

She encourages people to shop the outer aisles at the grocery store and to avoid falling back on canned and dry/processed foods.

“We aren’t health nuts at our home, but I try to have fruit, veggies and proteins that are ready to eat,” says Patti, a mother of two teen daughters.

“It is hard to find people to cook for me,” she says, “but if they knew that all I ever wanted was a grilled cheese, maybe they would give it a try.”

Blend together ingredients with a hand mixer. › Place ice cream mixture into an ice cream maker, and churn for 30 minutes. › Freeze in containers for about an hour or until almost solid.

Place all ingredients in a sauce pan, and simmer until bubbling and thick.

Crunch to go over topping

Bake for 8 minutes at 350°F. › Dish out ice cream, pour the sauce over the ice cream and top with sugared walnuts. 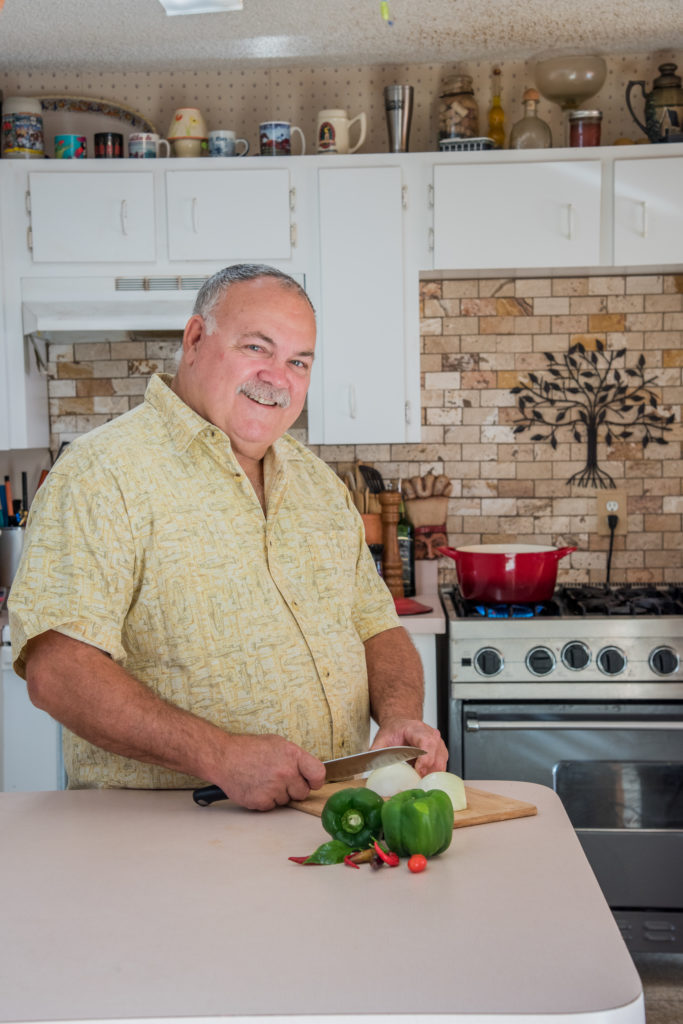 Born in Tampa, Chef Randal White is a third-generation Floridian who developed a love and fascination with food in childhood.

“My mom was a great inspiration. Her Crab Chilau (pronounced “sha-lau”) is the dish that made me fall in love with cooking. My dad was a union iron worker who would build outdoor grills and roast whole hogs,” recalls Randal. “I was about 8 years old when I started making spaghetti and barbecue.”

Randal vividly remembers attending a fancy dinner party with his family at Disney World when he was in elementary school. He was blown away by the dramatic ice sculptures and the impressive buffet. That inspired him to take his first restaurant job while in high school. After four years in the Marines, he went into the culinary field full time and has remained there ever since.

Randal’s fridge always contains fresh eggs (The family has free-range chickens at home.), different cheeses and real butter. In the pantry, you’ll find stone-ground corn meal, various pastas and rice. He swears by a set of sharp knives and frequently uses a mandolin for thin slicing of veggies.

If Randal could change one thing about how Americans eat, he’d eliminate all the high fructose corn syrup and GMOs.

He often makes the following dish for his wife, Sally, and their teenagers, Logan and Sydney.

Remove skin and bones from mullet. › Flake the fish well. › Mix all ingredients together, and chill at least one hour. › This makes approximately 1 quart of mullet spread. › Serve with saltines. 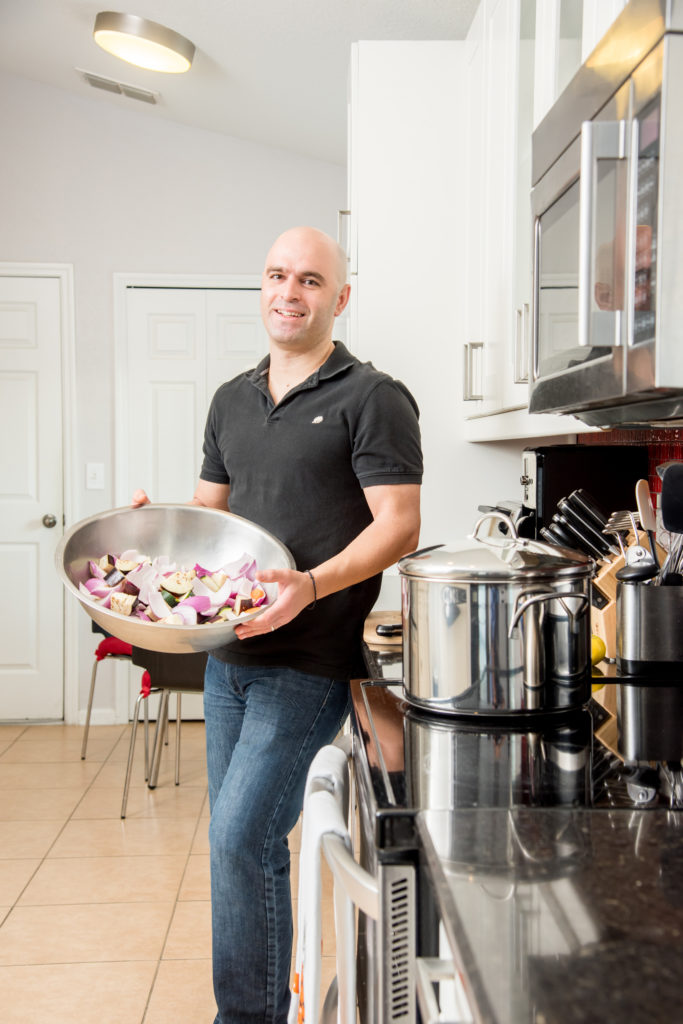 While attending college in England, this native of Greece began cooking for his roommates because, let’s face it, eating out all the time can be pricey. He’d watched his mother and grandmother cook, but it wasn’t until college that he found his own love of food.

After finishing his college degree, Dimitri Pomakis fulfilled his country’s mandatory two-year military service. When he was discharged in 2005, Greece’s dismal economy inspired him to come to the United States and begin working in a relative’s Greek restaurant. (He’d actually come to Texas as a high school exchange student years earlier.)

“I made my hobby into my career,” says Chef Dimitri. Sure enough, in 2012, the Pomakis family opened Feta Mediterranean Cuisine in downtown Ocala, and it’s become an area favorite.

Chef Dimitri’s wife, Kathryn, also hails from a cooking family. Of Chinese descent, she grew up in Southern California where her family had a restaurant.

Open Dimitri’s refrigerator at home and you’ll always find Feta cheese, tzatziki sauce, Greek wine and beer. The pantry is stocked with Asian ingredients because of how Kathryn enjoys cooking.

Dimitri’s favorite kitchen tools include a sharp Zwilling chef’s knife, a blender and a grill; he prefers cooking outdoors when cooking at home.

He wishes Americans would stop eating so much processed fast food. They surely would if they could enjoy the family recipe he’s shared here.

Preheat oven to 500°F. › Cut tops off peppers and 7 of the tomatoes. ›  Remove seeds and hollow out, reserving the tomato “insides.” › Grate those insides, and set aside. › Season meat with salt, pepper and oregano. › Place rice in bowl with meats, seasoning, parsley, sugar, onion and grated tomato. › Mix well with your hands. › Stuff hollowed peppers and tomatoes with meat mixture. › Place in large baking dish (glass or metal), and add a small amount of water, just enough to cover the bottoms of the tomatoes and peppers. › Grate the final three tomatoes, and spread grated tomatoes over top of stuffed peppers/tomatoes. › Drizzle all with olive oil. › Sprinkle with salt and pepper. › Cover with aluminum foil and bake for 1 hour. › After 1 hour, uncover and sprinkle with Feta cheese. › Continue baking about 15 minutes until cheese has melted. › Serve with tzatziki sauce and additional Feta. 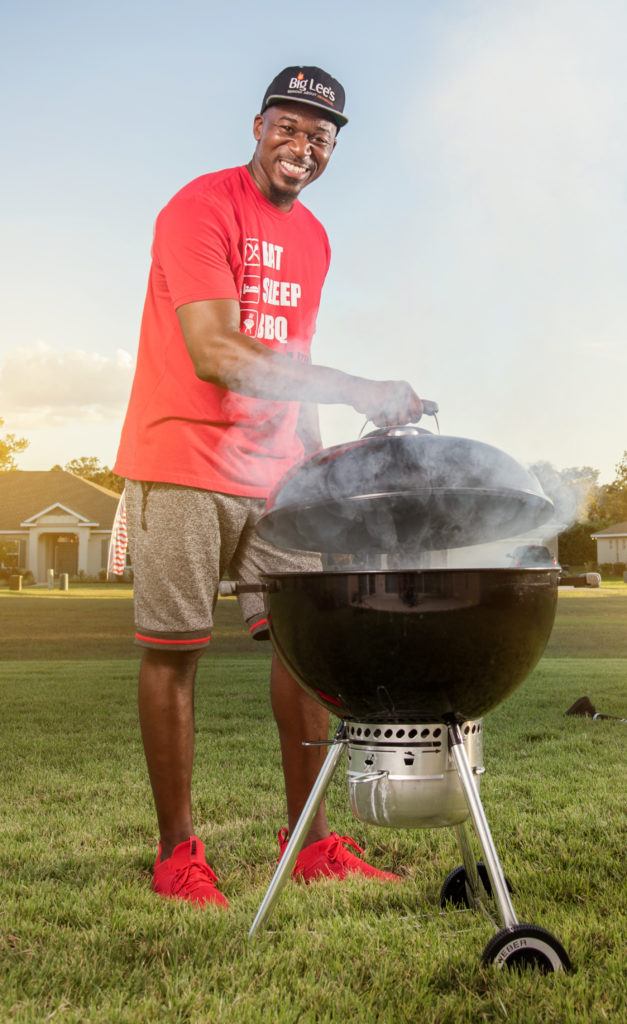 Raised in a family that enjoyed cooking made an early impression on Rashad Jones. No Hamburger Helper for this crew.

“I grew up with scratch-made food and loved it,” says Rashad, adding that his mother’s chicken cacciatore and stuffed pasta shells were favorites. He was cooking his own scrambled eggs by age 7.

Rashad pinpoints November 24, 2011 as the date he fell in love—with barbecue, that is, specifically, the phenomenal barbecue cooked by his wife’s uncle, Leon Archie, aka “Big Lee.” (And yes, he named the business after him.)

“That was the day the barbecue bug bit me,” he remembers. “’Serious about BBQ’ isn’t just a tag line; my passion for barbeque is deep-seated in my heart.”

This self-taught “barbecue nerd” is a firm believer that there are no shortcuts when it comes to hard work and discipline, traits that have allowed his food truck business to thrive. He also credits wife, Patrice, a college professor, whose palate is, as he puts it, 20/20.

“She can taste something and immediately knows if it needs more heat, more spice or more savory,” he says. “If she says something is spot on, it is!”

Because Rashad and Patrice have four sons ages 1 to 7, their pantry holds many boxes of cereal, graham crackers, applesauce, nuts and dried fruit. The fridge always has milk, fresh veggies and fruit, and cheese.

He wishes more Americans would take time to get in the kitchen and cook with their family.

“Home shouldn’t just be a ‘docking station’ to power up your devices and sleep,” he says. “Cooking is an opportunity to create with those you love, not to mention, it’s more nutritious than processed, prepared food. When my wife and I go into the kitchen, our boys want to cook with us. We’re never getting these years back, so it’s important to slow down and create time to cook and eat a meal together.”

Put all ingredients into a blender, and mix for one minute. › Place 1 to 2lbs of sliced Korean-style short ribs into a durable and sealable bag. › Pour the blended marinade into the bag with the beef ribs. › Squeeze all air out, and mix meat and marinade combination thoroughly. › Place the sealed bag and contents in a bowl, and refrigerate for 24 hours. › Set your grill to 400°F, and sear each side of the beef rib slice until you reach your desired level of doneness. (“I’m a medium rare guy,” says Rashad). › Plate with your favorite sides, and enjoy!