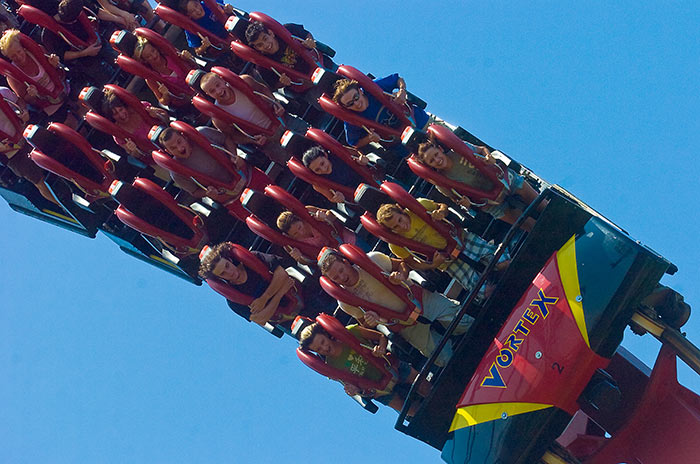 With that in mind, we’ve rounded up an assortment of the most thrilling rides in the Southeast. Some are brand-new, and others have been around awhile but have remained favorites for good reason. Make this a summer to remember and take on all of them… or at least as many as you can handle.

Falcon’s Fury
Busch Gardens/Tampa/buschgardens.com
When ride designers created Falcon’s Fury, they were focused on the amazing speed of a hunting falcon in a free dive. Keep that in mind as you climb into this one-of-a-kind ride that has no connecting structures and stands a chilling 335 feet high. Prepare to experience the sensation—and speed—of a fierce falcon as he swoops earthward after his prey. Oh, did we forget to mention that a hunting falcon pivots 90 degrees before diving face down? That’s exactly what you’ll do as well. Once you’re in the face-down dive position, you’ll plunge straight down at 60 miles per hour. Talk about a rush! Why we love it: It’s North America’s tallest free-standing drop tower ride. Cheetah Hunt Busch Gardens/Tampa /buschgardens.com T his mega launch coaster takes its name and inspiration from nature’s fastest, most agile mammal. You’ll zip along at top speeds of 60 miles per hour in one of five 16-passenger trains and climb high above the African landscape of the Serengeti. Prepare yourself for the figure-eight at the top of the hill where riders weave their way through a series of quick turns before dropping down 130 feet to ground level and tearing along through a rocky gorge, just like a racing cheetah hot on the heels of its prey. But it’s not over yet! The final sprint of this 4,400-foot-long experience takes riders through a number of short, banked turns before approaching the third and final launch phase where another wild burst of acceleration sends you streaking over the crowds below. Why we love it: You’ll rocket over the heads of other park guests watching your adventure!

SheiKra
Busch Gardens/Tampa/buschgardens.com
SheiKra is some of the most fun you can have in three minutes on a half-mile of steel track. It’s been around for a decade now, but when it opened, SheiKra set records as North America’s first dive coaster. Once you’re safely strapped in, the floor beneath your feet retracts and the single car coaster leaves the station, taking riders 200 feet up before slowly coming to the edge of a stomach-tumbling, 90-degree drop. Half the fun is found in those few heart-pounding moments (actually about four seconds) as you hang there, knowing all too well what’s in store… and then it happens. Your floorless car plunges over the edge, and you’re hurtling along at 70 miles per hour-plus, whipping through a simultaneous loop and roll. There’s a second vertical drop into an underground tunnel before the ride culminates in a wild splashdown finale, sending huge water sprays into the air. Why we love it: It’s named after the shikra, an Asian-African hawk that dives vertically when hunting. 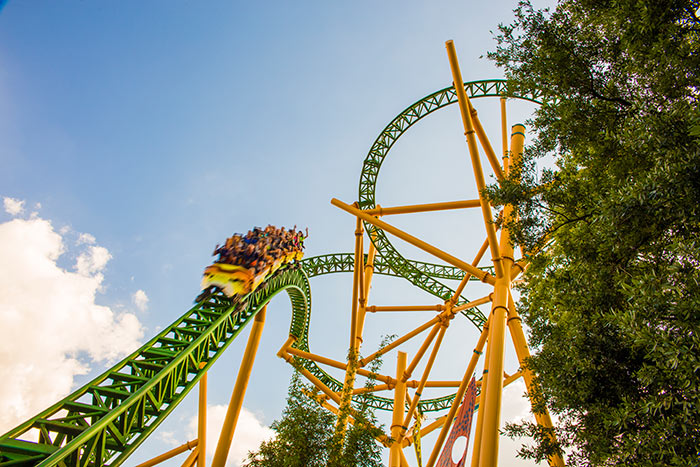 Colossal Curl
Adventure Island/Tampa/adventureisland.com
This newly opened waterslide ride takes the place of the former “Gulf Scream,” and at nearly 70 feet, it’s the tallest of the rides in the park. Up to four passengers at a time can experience this mega slide. At 560-feet in length, Colossal Curl sends you speeding high above the 30-acre park and delivers a thrilling sensation of weightlessness. There’s no use trying to calm your racing heart as you whip through the slide’s unique funnel and wave elements, plunging into the waiting pool below. Why we love it: It’s the first new attraction at Adventure Island since 2006. Summit Plummet Disney’s Blizzard Beach Water Park/Orlando/ disneyworld.disney.go.com/destinations/blizzard-beach At 120 feet tall, Summit Plummet is easily the most extreme attraction at Disney’s Blizzard Beach, which, in our book, makes it a can’t-miss experience. If you’re brave enough to take the plunge, all you have to do is get in position, take a deep breath and push off. Gravity does the rest. The flume is so steep, many riders actually lose contact with it for a few moments, which only adds to the exhilaration. You’ll plunge 120 feet (yep, that’s 12 stories) at speeds up to 60 miles per hour, careen through a darkened tunnel and then burst out in a thrilling whitewater spray as you reach the end of the 360-foot run. There’s definitely a reason this is the flagship attraction at Blizzard Beach. Why we love it: At the end of the run, a digital “stop clock” displays your top speed! The Incredible Hulk Coaster Universal Studios Islands of Adventure/Orlando/universalorlando.com Riders will accelerate from zero to 40mph in a mere two seconds. That’s a force equal to a jet engine taking off an aircraft carrier. The weightless, zero-G roll is just the beginning as the ride carries those brave enough to conquer it more than 150 feet in the air. With a max speed of 67mph, Hulk features seven inversions and two subterranean trenches during the two minute 15-second ride. Why we love it: The Hulk sound effects pulsing in your ears only add to the ride’s excitement. Boomerang Wild Adventures/Valdosta, GA/wildadventures.com Long a park favorite, this reverse shuttle coaster features six inversions, hits speeds up to 60 miles per hour and has a 125-foot drop. Get ready for the twisting cobra roll and a vertical loop going forward, and then you get to experience it again… only in reverse this time. Why we love it: It has a maximum G-force of 5.2 Gs! 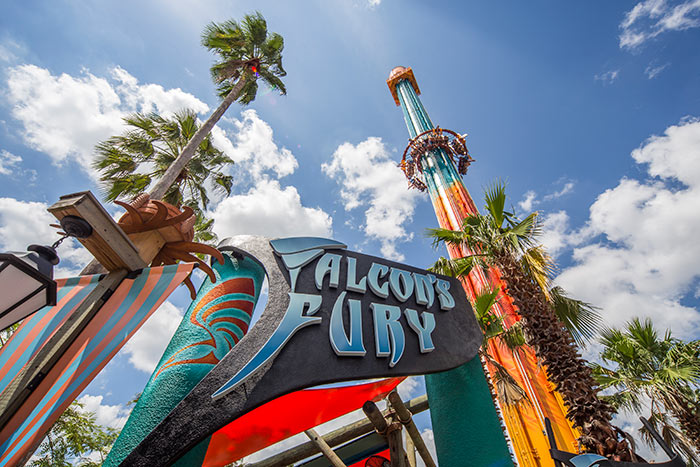 Twisted Typhoon
Wild Adventures/Valdosta, GA/wildadventures.com
This suspended looping roller coaster is deceptively quiet as it races along, but trust us, you won’t be. Hitting speeds up to 70 miles per hour, Twisted Typhoon rolls, winds, twists and makes a nearly 90-foot drop. Riders sit two abreast, and because the cars ride below the track, your feet will swing freely. It’s 1 1/2 minutes of whirlwind craziness that’ll leave you breathless. Why we love it: You’ll be upside down seven different times. Acrophobia Six Flags Over Georgia/Austell, GA/sixflags.com If you’re afraid of heights, you’ll want to skip this one. (After all, it should be a warning sign that the ride is named after this common fear.) But if you’re up for the challenge and heights aren’t an issue with you, you’ll love the freefall in this 200-foot tall, stand-up gyro drop tower. Although you’re safely fastened into a special harness, your legs dangle freely, which can be a bit disconcerting, but that’s part of the thrill. Acrophobia rotates as it rises upward a daunting 20 stories high, so look around and appreciate the incredible 360-degree view as you prepare for the drop of a lifetime. At the top of the tower, pneumatic pistons behind the harnesses go into action, tilting the riders about 15 degrees past vertical. And then the gondola is released and you’re freefalling back to Earth in less than 3.5 seconds. Why we love it: You get the sensation of parachute freefalling skydive… minus the airplane ride!

SkyScreamer
Six Flags Over Georgia/Austell, GA/sixflags.com
Warning: This is not your grandparents’ swing. Sure, you’re in an open-air seat with your feet dangling, but things get crazy in a hurry as SkyScreamer speeds up. Soon, you’re soaring around in a 98-foot-wide circle at 40 miles per hour. A perennial park favorite, this ride looks tame only when it’s not in motion. Why we love it: The panoramic view of the Atlanta skyline is stunning! Fury 325 Carowinds/Charlotte, NC/carowinds.com With its speed and crazy curves, Carowinds’ new monster coaster may remind you of an angry hornet zeroing in on its target… with you along for the ride. Appropriately named, Fury 325 is 6,602 feet long and 325 feet high. Riders sit four across in a single row in three open-air steel and fiberglass trains, each with eight cars. Don’t sign on for this one if you’re scared of heights or speed. Once the train climbs the 325-foot chain lift hill, it hurtles downward at an 81-degree angle, hitting top speeds of 95 miles per hour. There are plenty of high-speed turns, S-curves and staggeringly high hills and drops. Adding to the fun, the coaster actually passes over and under the park’s main entrance. Why we love it: The park had to obtain Federal Aviation Administration approval to build the coaster because of its height!

Intimidator
Carowinds/Charlotte, NC/carowinds.com
“Gentlemen, start your engines!” This ride is all about intimidation, thanks to seven (count ‘em!) extreme drops and a longer-than-usual ride time of three minutes plus. The first hill is an impressive 232 feet followed by a sharp 74-degree-angle drop. The second hill is 178 feet tall, and there are enough twists, turns and drops—not to mention speeds of 80 miles per hour—to make riders think of NASCAR action all the way through. Plus, the open-air, stadium-style steel and fiberglass trains are themed after Dale Earnhardt’s 1998 RCR No. 3 Chevrolet Monte Carlo. Why we love it: Inspired by racing legend Dale Earnhardt, it’s one of the tallest, fastest and longest coasters in the Southeast.

Vortex
Carowinds/Charlotte, NC/carowinds.com
What can you expect? One of Carowinds’ long-time favorites, this stand-up roller coaster gives a different twist to the coaster experience. Your two-minute-plus journey includes a 90-foot lift and speeds of 50 miles per hour as you loop, drop and spin… all while standing up. A visit to Carowinds is not complete without at least one ride on the Vortex. Why we love it: You’ll get a great view of the park… if you can focus on anything but the ride!