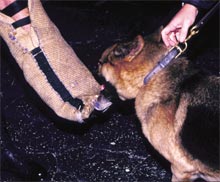 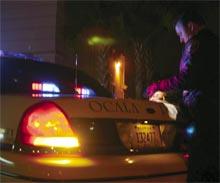 There is something surreal about sitting in a police patrol car in high-speed pursuit of suspected motel robbers at 3am.

Or at least it is for this writer on a ride-along with Ocala Police Department K-9 Officer Jeff Bairstow. But for Bairstow and his K-9 partner, Dino, it is their reality on the 8-5 shift — as in the 8pm to 5am shift.

The call from OPD dispatch came in only moments before a suspected robber who struck another motel the day before had done it again — at the motel across the road from the first. Bairstow floors the accelerator and we’re off! The car races through Ocala, its lights flashing and siren blaring as a warning to the few motorists on the streets.

We head toward I-75. On the dashboard-mounted laptop computer screen in the patrol car, Bairstow can read that the suspected robber has fled in a white Ford and is headed north with an officer already in pursuit.

Now on the interstate, Bairstow is informed that the suspected robbers have taken the next exit, and in mere seconds, so have we. The other OPD patrol car has pulled up directly behind the white Ford. Bairstow communicates by radio with fellow OPD Officer Robert Douglas and they maneuver the suspect’s car off the exit ramp. The bright lights from the patrol cars clearly show two people in the car: a man at the wheel and a woman in the passenger seat.

Bairstow brings his car to a stop, and he and the other officer both quickly disembark, guns drawn. Bairstow runs down the slight slope toward the driver’s side while Douglas moves toward the passenger side.

The two officers forcefully shout instructions to the suspects:

“Turn off the vehicle!”

“Put your hands up!”

“Take the keys out of the ignition and toss them outside!”

“Keep your hands up! Get out of the car and lay face down on the ground!”

The male driver of the car is the first out. And without hesitation, he does as told, immediately dropping down to the ground. Bairstow tells him to put his hands behind his back and handcuffs him.

On the other side of the car, the woman drops down on the side on the road and Douglas handcuffs her just as quickly.

I look at the clock. Only 15 minutes have passed since we got the call.

Taking a breath, I suddenly realize that we have been joined by half a dozen other patrol cars now lining the exit ramp. OPD officers converge on the scene. Thanks to good police teamwork, the suspected robbers are in custody.

On the dispatch radio I hear that a Marion County Sheriff’s deputy is requesting assistance, as he is in foot pursuit after attempting a traffic stop. I can hear him, slightly winded, giving directions over the radio. Bairstow has heard the same transmissions on his walkie-talkie outside the patrol car and hurries back. He jumps in the car and we pull out, back on the interstate again, going south this time.

I notice that only when Bairstow is back in the car does Dino relax and lie down in his compartment behind the front seat. Although he wasn’t needed with the apprehension of the suspected robbers, he had alertly watched it all unfold as had I. Had Bairstow needed him, the highly trained canine would have been ready to go to work in an instant.

Back off the interstate, we pull into a gas station where the sheriff’s patrol car is parked behind another vehicle, its driver’s side door open. Other officers had arrived before us, aided the deputy, and the scene was under control. Yet another example of good police teamwork.

While Bairstow is checking in with the other officers, I look over at the sheriff’s car and realize the deputy who called for assistance is K-9 Officer Brian Dotten. Earlier that night, we had run a training narcotics search with Dotten and his dog, Tuck. From the back of the sheriff’s car, Tuck is intently watching his handler. Like Dino, Tuck hadn’t been released to aid Dotten. It is evident from the two incidents I’ve witnessed that the K-9 dogs are used only when necessary, not as habit or on a whim.

But when they are called on to perform — whether it is narcotics detection, tracking, or criminal apprehension — they are an invaluable part of a police force.

“I love being a K-9 officer,” says Bairstow, as we began our patrol shift at 8:30pm; he has been a patrol officer for 16 years. “I always enjoyed the patrol work and I thought having a K-9 partner would be interesting and challenging. It’s been that and more.”

Dino, a 7-year-old German shepherd imported from Hungary, has been partnered with Bairstow for five years. Having trained and been certified together, they are the only partners each has ever known. And not only do the two work together, Dino goes home with Bairstow and lives in a special kennel there.

“A strong bond develops between an officer and his dog,” Bairstow explains. “Even the best of human cop partners don’t go home with each other.”

Dino is one of three K-9 dogs on the OPD unit, while the Sheriff’s Department has seven. The two units work very closely, even training together. “We’re almost one unit,” offers Bairstow, noting that both he and Dino are also deputies.

Bairstow is quick to credit the K-9 officers who have come before him. “Officers Lisa Garceau and Mike Clemmons were the first ones to have the dogs,” he says. “It started as a patrol and drug program and grew from that. Lisa and her dog, Jumbo, were a particularly remarkable team and made many criminal apprehensions.”

“I take Dino to the calls and he does his job,” says Bairstow. “I’m just his chauffeur.”

Bairstow is being modest. It is obvious that he and Dino are a team. While Dino has received highly specialized training, there is no doubt while watching him work that he wants to please Bairstow.

On this night, Dino has detected the scent of marijuana on a traffic stop, performed a perimeter patrol of a building where an intrusion alarm has gone off, and been used to guard the back door of an apartment should the suspect, wanted for several outstanding warrants, try to escape.

“Dino loves to go to work,” says Bairstow. “He knows when I come out to get him in uniform that we’re going to work.”

The partners work out of a specially outfitted patrol car, clearly marked as a K-9 Unit. On the front of the car is a license tag with Dino’s name on it, designating him as a K-9 officer. Dino also wears a police badge attached to his collar.

There is no backseat in the patrol car — instead a built-in metal kennel has been specially outfitted for Dino. The environment of the compartment and the patrol car itself is carefully monitored by a device designed specifically for K-9 units. For instance, it checks the temperature of the car and sounds an alarm if the interior gets too hot and the dog is put in danger.

The trunk of the patrol car is filled with K-9 equipment. There are tracking leads, a first-aid kit for the dog, tracking harnesses, and training equipment, such as bite sleeves and a blank gun. It is not unusual to do impromptu training sessions during a shift to keep the dog active. During this shift, we have two such sessions.

Another officer agrees to play the bad guy, puts on a bite sleeve, and disappears into a secluded area. Bairstow puts the tracking gear on Dino and we are off after the “suspect.” Down a rutted dirt road, Dino begins tracking, his nose to the ground and sweeping from side to side. When he picks up the track of a scent that doesn’t belong, he begins pulling Bairstow along. I follow close behind in the beam of the officer’s flashlight.

Dino pulls Bairstow up a hill, over railroad tracks, and has the suspect cornered. Bairstow releases the dog and he engages the suspect, latching on to the bite sleeve. Once the suspect is under control, Bairstow commands Dino to release and he does without hesitation.

“Dogs have an amazing sense of smell,” Bairstow explains. “They have an inherent ability to know which scents belong to an area and which don’t. Think of it this way: We smell a pizza, but they smell each and every ingredient — the cheese, the pepperoni, the onions, the tomato sauce, everything.”

The other training session that evening was with aforementioned Sheriff’s Deputy Dotten, who had stashed drugs in different vehicles. First, his dog, Tuck, also a German shepherd, ran the course and alerted his partner each time he detected the hidden drugs. Then Bairstow and Dino did the same. The dogs are trained to detect the scent of marijuana, heroin, cocaine and methamphetamine.

How much credence is placed in the dogs’ abilities to sniff out drugs? If a dog alerts his handler to the scent of drugs, this gives the police officer probable cause to immediately do a search.

To me, the shift has gone by much too quickly. But for Bairstow and Dino, it’s been a quiet night by their standards. From my front-seat viewpoint, what I’ve seen is Bairstow and Dino doing their jobs as police officers. As a team.

But tomorrow is another shift and they’ll be out there again. Bad guys, beware.