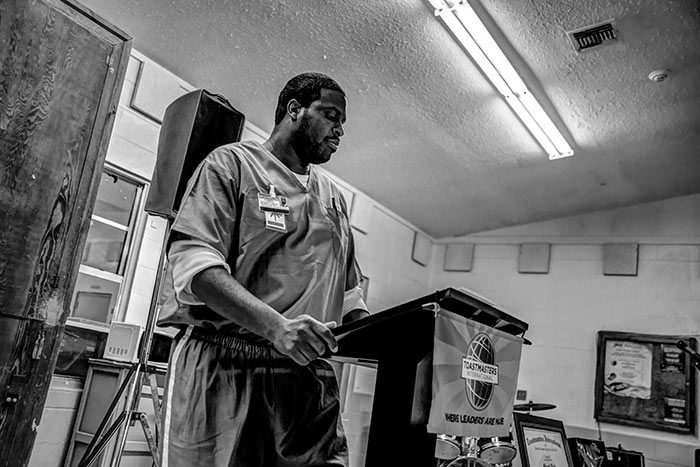 Thirty men gather in a small hall, and the meeting begins with a few bangs of the gavel. A band opens the evening with some well-known songs; everyone taps their toes. The Joke Master delivers a cheesy joke about Jesus walking on water because taking the ferry was too expensive. Then, everyone falls quiet as the first of four speeches begins. This is how Tuesday nights go for the Dream Chasers Gavel Club inside the work camp of Marion Correctional Institution. 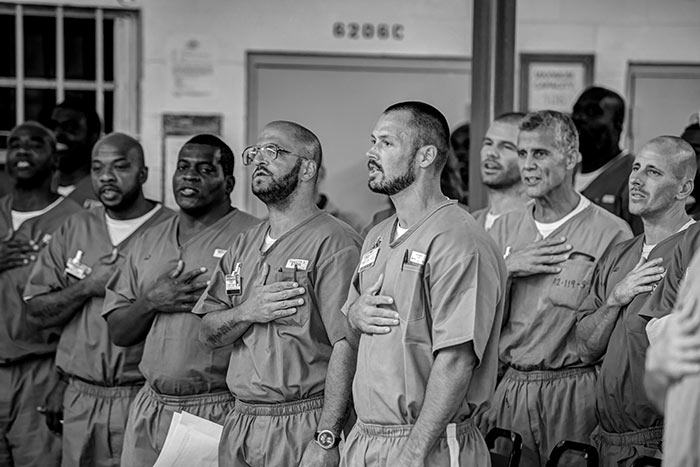 It’s not often someone goes to prison to get inspired, but Dr. Manal Fakhoury does it every Tuesday and Saturday. She has been a member of Toastmasters, a public speaking organization, for about eight years.

“Toastmasters International is a 91-year-old organization, and it’s in over 130 countries. The Gavel Clubs are done in prisons, and they allow the gentlemen to work on their leadership and communication skills. Back in July, we started the club after I received a letter from an inmate,” she says. That inmate was Leonard Rera, who had participated in a Gavel Club at a previous correctional institution and sent the letter to Toasting Ocala, a local Toastmasters chapter. Manal had considered starting a club before.

“It was something already planned in my mind, I just didn’t know when. It was the perfect invitation. I responded without hesitation,” she says.

“I have a picture taken of all the volunteers in the parking lot. I laugh because that picture is so precious. We didn’t know what we were walking into that day,” Manal recounts. What they got was a standing ovation from the 24 attendees. It has become tradition, and the volunteers are greeted this way every week. Then Manal asked, “Who’s Lenny?”

“The biggest smile comes across this guy’s face standing near me, so that was a cool moment,” she says. Since then, the club has grown to 30 members and a second club, X-Treme Speakers Gavel Club, began in the Marion Correctional main unit. Both are at capacity and have waiting lists for new members.

Leonard is now the club president, overseeing the program and the other officers. Once his letter found Manal and the club was a go, he began recruiting, beginning with Andre Staton. Leonard asked him to step up for one of the most involved officer positions.

“I was his bunkmate at the time,” says Andre. “He took his books out, and he went over the material. I started getting cold feet, but, as soon as I saw the organization, I was like ‘yeah, I want to be the vice president of education.’ I saw the value of the program and ran with it,” he says.

Every week, Leonard starts the meeting with the bang of a gavel. Surely, the irony isn’t lost on the guys: the same sound that put them away now opens the nights they look forward to most. Members take on different roles each week—the Joke Master delivers a punchline, the Word Master evaluates the speakers’ grammar and the Ah Counter listens for filler words like ‘um’ and ‘uh.’

Then, four men deliver their carefully crafted speeches for the members and volunteers. They begin writing their speeches about one month before they’re scheduled to bring them to the club, working their way through a book with 10 sets of objectives.

“They can write about anything, but they have objectives they have to meet,” says Leonard. “For example, the guy I’m evaluating today, his objectives are to communicate his ideas clearly, accurately and deliberately, and he has to use rhetorical devices, like similes and triads, and eliminate jargon.”

“When you’re in the dorm, you can always tell who’s going to be giving a speech that week because he’s in the corner talking to himself and making hand gestures, but that’s one of the ways we prepare,” explains Joshua Puckett, one of the members of X-Treme Speakers. They’ll talk to mirrors or grab a friend to practice on, too, he adds with a laugh.

Although it seems like a crash course in public speaking, the effects ripple much further—into life-changing territory.

“I’ve been in prison since I was 18, so the experience I’m gaining here is going to help me be successful in the workplace because I’ve never had a professional experience,” says Joshua. “This is giving me skills I can put into practice in interviews.”

“For someone like myself, I came to prison at a young age, so stuff like this, getting up and speaking to groups of people and professional kinds of skills, the formalities, the traditional stuff we have to learn how to do, I wouldn’t have gotten that experience. I never had the opportunity to do that,” he says.

Fellow member and Parliamentarian Richard Midkiff confirms that Gavel Club provides a learning structure for younger men who may have been missing one before prison.

“One of the cool things I see is a lot of younger guys getting into it, studying and looking for topics, seeing them watch the news and critique politicians with their ‘ums’ and ‘ahs’. We were sitting there watching them cupping their hands, and they were saying ‘No! Open your hands up!’ It’s cool to see that, to see younger guys in here digging and trying to find something of value,” he says.

“It’s a passion of mine to see a man learn how to challenge the way he speaks to a more professional level,” says X-Treme Speakers President James Sheffield. He says he enjoys hearing their language change, “going from do’ to door.”

“Often people equate your communication skills with your intelligence,” Manal adds. Andre believes his Toastmasters skill set will be applicable beyond the workplace, making him a better father and family member.

Gavel Clubs provide something else these inmates say is sorely missed in prison: a sense of community, one built on respect and mutual learning instead of fear.

“A big thing for incarcerated men is the teambuilding aspect, because we built teams when we were free, but we were doing it the wrong way and for the wrong reasons,” says Andre.

“The natural mindset of an inmate in prison is antisocial. ‘I can’t talk to anyone, they’re out to get me, it’s every man for himself, it’s cutthroat,’ things like that,” Leonard says. “This program is the exact opposite. It encourages open dialogue, friendship, relationships. It encourages all those things we’ve been lacking in prison.”

“Each Saturday night to me is like a two-hour furlough. The whole time I’m there I’m not in prison,” he says. And it’s true—the meetings feel full of a kind of lightheartedness outsiders wouldn’t typically associate with imprisonment.

“These guys are putting their heart and soul into this, and it’s really cool, especially in an environment like this where you have to worry about a lot of other things and none of them are positive. But this Gavel Club, it means so much to us that Saturday nights we have something positive to look forward to,” says Member and VP of Public Relations Steven Freeman.

“The guys look forward to it all week long,” says Christopher Miller, X-Treme Speakers’ VP of Education. “They’re constantly asking what their role is as a member of the club, what do they do, how do they prepare. They’re thinking ‘I need to schedule, I need to be prepared,’ and a lot of guys haven’t had that in their pasts.”

Manal says both clubs are incubators for great ideas with the men creating new programs at a rapid-fire pace, from mentoring at the Department of Juvenile Justice to providing inmates more educational resources.

“We are currently working with DJJ on getting inmates from the club who are low custody to go and speak to the juveniles,” says Leonard. “We’re trying to help the next generation. One of my passions is youth ministry; I can relate to the kids that are problem children.”

As the Dream Chasers’ VP of Education, Andre is responsible for designing classes to address the needs of the club members, which has already resulted in Gavel College, a bi-monthly class on public speaking fundamentals. He’s also created Dream Craft Library, a collection of public speaking books and media, such as TED Talks, that also provides a safe space for practicing speeches. Ron Lee Clark, Dream Chasers’ VP of public relations, also teaches Gavel Grammar Workshop.

“The workshop is correcting the members’ errant grammar, causing them to sound more professional, which in turn makes them more marketable. I’ve been trying to create new programs to make it more impactful and build things the guys can immerse themselves in,” Andre says. With so many programs created in less than a year, he’s clearly the right man for the job.

Manal also has a new project in the works.

Toastmasters clubs earn points for accomplishments, but, currently, no rewards are offered to volunteers starting Gavel Clubs, meaning there is no incentive to start more. Manal’s long-term goal is to establish a Gavel Club in each prison in the United States and is preparing a proposal for Toastmasters  International.

“Within the Toastmasters organization, there’s zero information and no credit given for starting these clubs. More important is getting Toastmasters International to elevate these clubs and invest in them more,” she says.

“At Dream Chasers, we are trading guns for pens, drugs for responsibility, violence for order and failure for success. As felons we face stiff odds after release, but this club helps us balance the scales,” says Andre. “I dream of a day where the justice system begins to truly care about correction and offer real solutions to broken men.”

One thing became clear to this writer after Gavel Club: The inmates cease to exist on meeting nights. They’re gentlemen, Gavel Club members, Toastmasters. That transformation should be the goal in every prison. If reformation is really the purpose of doing time, if reducing recidivism is really the goal, Gavel Clubs seem like a crucial building block to better futures for incarcerated men and women. While the men of Dream Chasers and X-Treme Speakers finish their sentences, they plan to keep improving themselves together. Steven says it best:

“I’m rooting them on like my teammates, and we are a team. It’s become a team, a family… with a little dysfunction.” 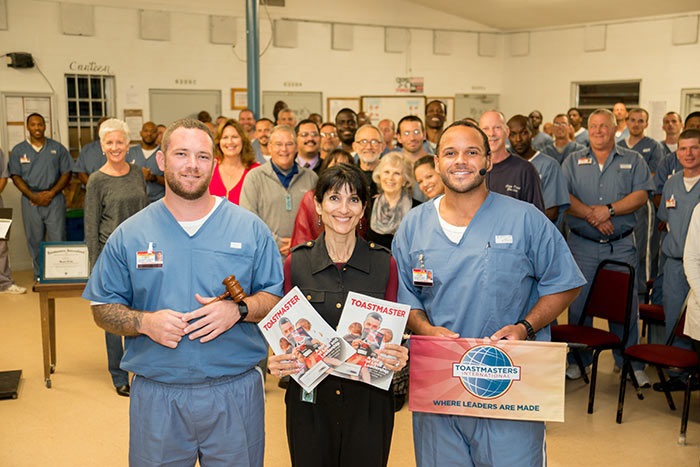