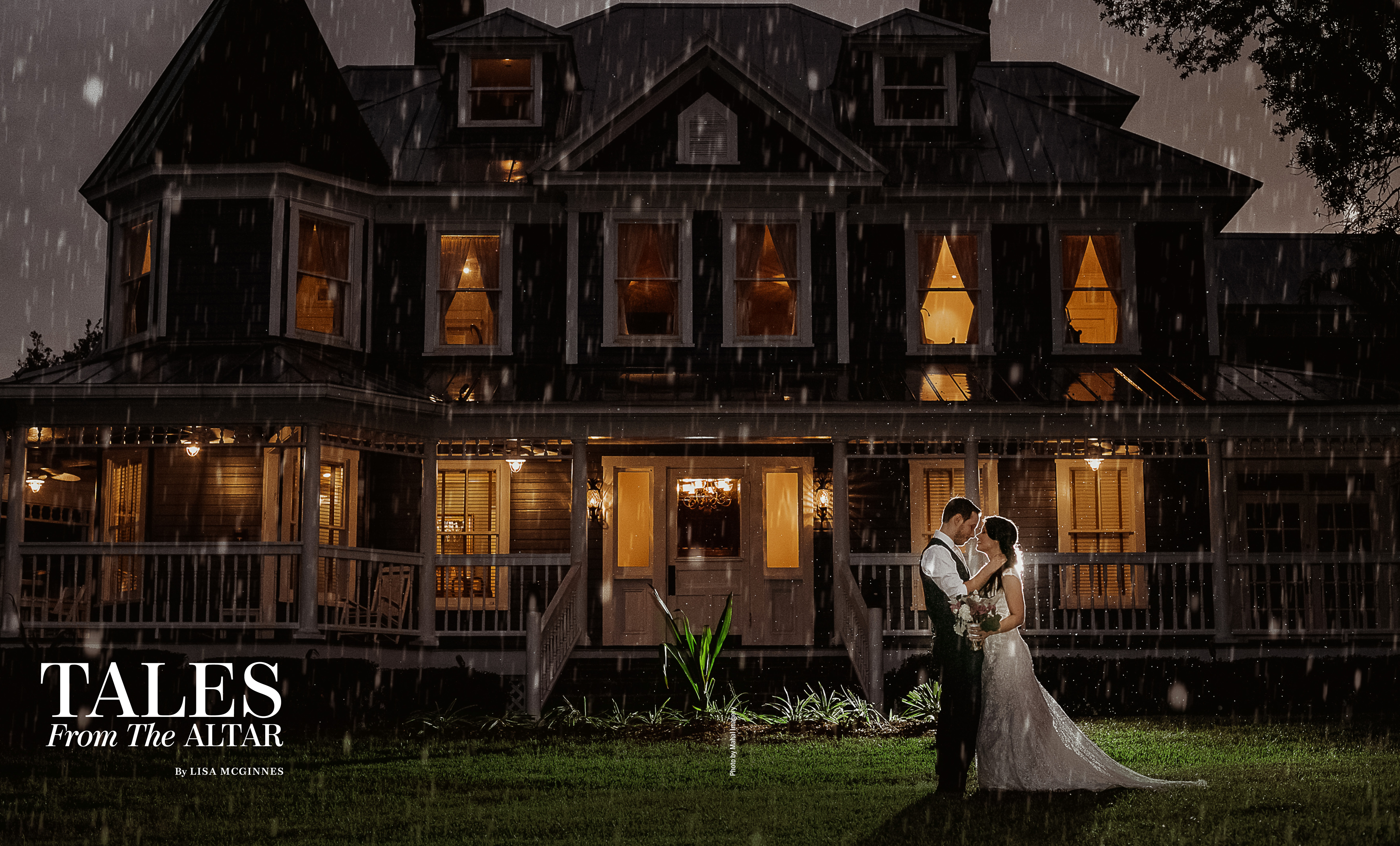 Planning your wedding? No pressure—just dozens, if not hundreds, of your family members and friends expecting to be wined, dined and entertained…what feels like millions of tiny details to attend to…and it’s supposed to be the most perfect day of your life. What could possibly go wrong?

We asked some local couples and photographers to share their favorite stories about unique weddings—some that didn’t quite go as planned and some that did and had an unforgettable element. We learned that sometimes it’s the unexpected that makes a unique and beautiful memory.​

Ocala photographer Lyn Larson of Mahal Imagery remembers working her first wedding at the historic 1903 Highland Manor Mansion in Apopka. She was photographing the nuptials of Shaye and Michael Milson.

“It is impressively unique,” Larson says of the venue. “I immediately fell in love.” But as soon as she went inside she began to feel a little strange.

Climbing the stairs, she felt the temperature drop, broke out in a cold sweat and began to feel as though someone was following a bit too closely behind her…just to find that no one was there. The odd feeling continued throughout the day, but only when she was on the second floor of the house.

It wasn’t until late in the evening when one of the servers asked her if she’d seen the ghost that her suspicions about the place were confirmed.

“At the end of the night, I took one shot of the couple in front of the manor. I looked up at the window and a shadow moved away from the curtain.”

When she reviewed that parting shot, Larson saw the haunting face in the second-floor middle window and would later learn there had been many visitors who had similar experiences and claimed to have also seen the original homeowner…who died more than 50 years ago. 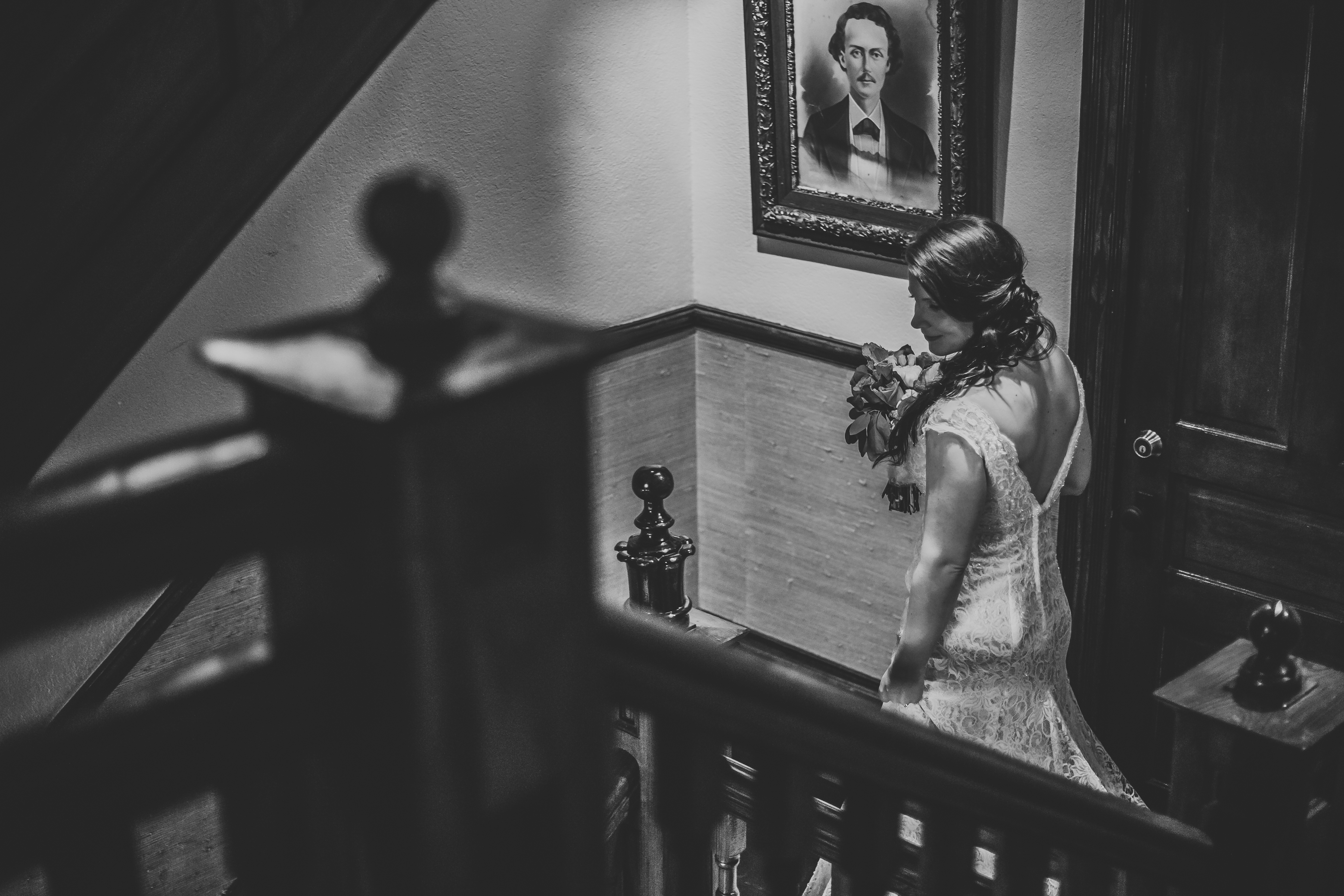 Dancing in the Street

When Chris and MaryLei Villella were searching for a venue for their November 2014 wedding, they joked that they should get married in the cul-de-sac in Southeast Ocala where their parents still lived. These next-door neighbors grew up together and started dating after college. When they couldn’t find a venue, they decided the cul-de-sac was actually a great idea.

“Our wedding was the coolest thing I have ever been to,” MaryLei says. “It really turned into an amazing scene.”

With 350 guests, the couple held their ceremony in her parents’ front yard and set up the reception in the cul-de-sac, with many special touches, from the market lights to the seating area created with her mom’s living room furniture. Their best surprise was when they drove away in her dad’s vintage convertible—all the neighbors had put up holiday lights early to give them a magical send off.

The memory still makes MaryLei a little emotional. “It really was a fairy tale. I never thought it could be that perfect.” 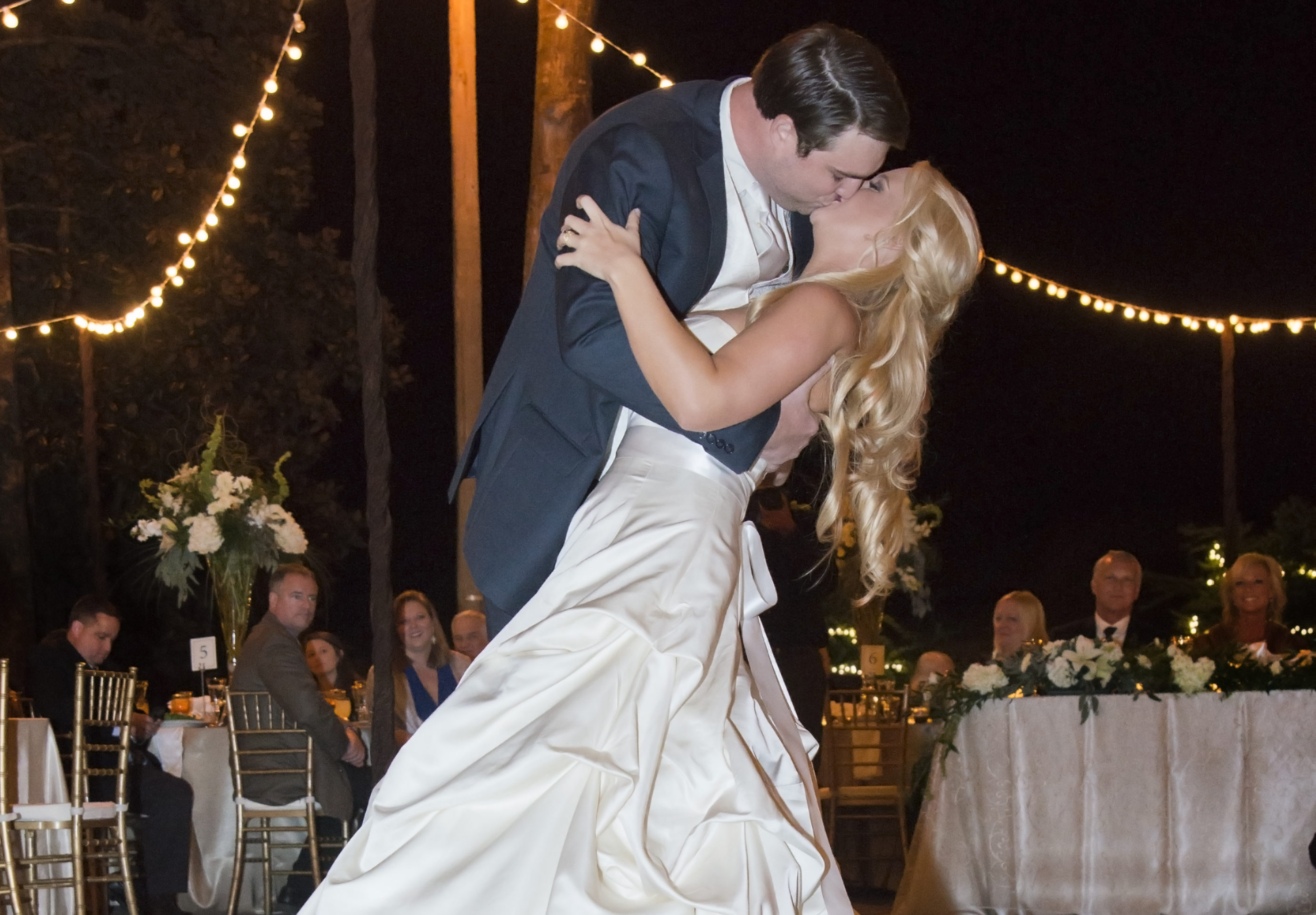 Adrian and Jessica Clark became “Ocala famous” when the video of his December 2018 surprise proposal at a gas station went viral. The unlikely place had special meaning for the couple who had shared a tender moment there on one of their early dates, and news stations around the region picked up the story. So the vibrant young couple decided to run with it.

“Ever since that, it’s kind of been like celebrity status; people recognize us in Ocala no matter where we are,” Adrian explains.

The glamorous couple pulled off the fun Hollywood vibe they wanted for their reception—less traditional and more party—by setting up a red carpet with a step and repeat banner like those seen at awards ceremonies and media events.

“It was like a party, a red carpet, a social gathering,” Jessica recalls. 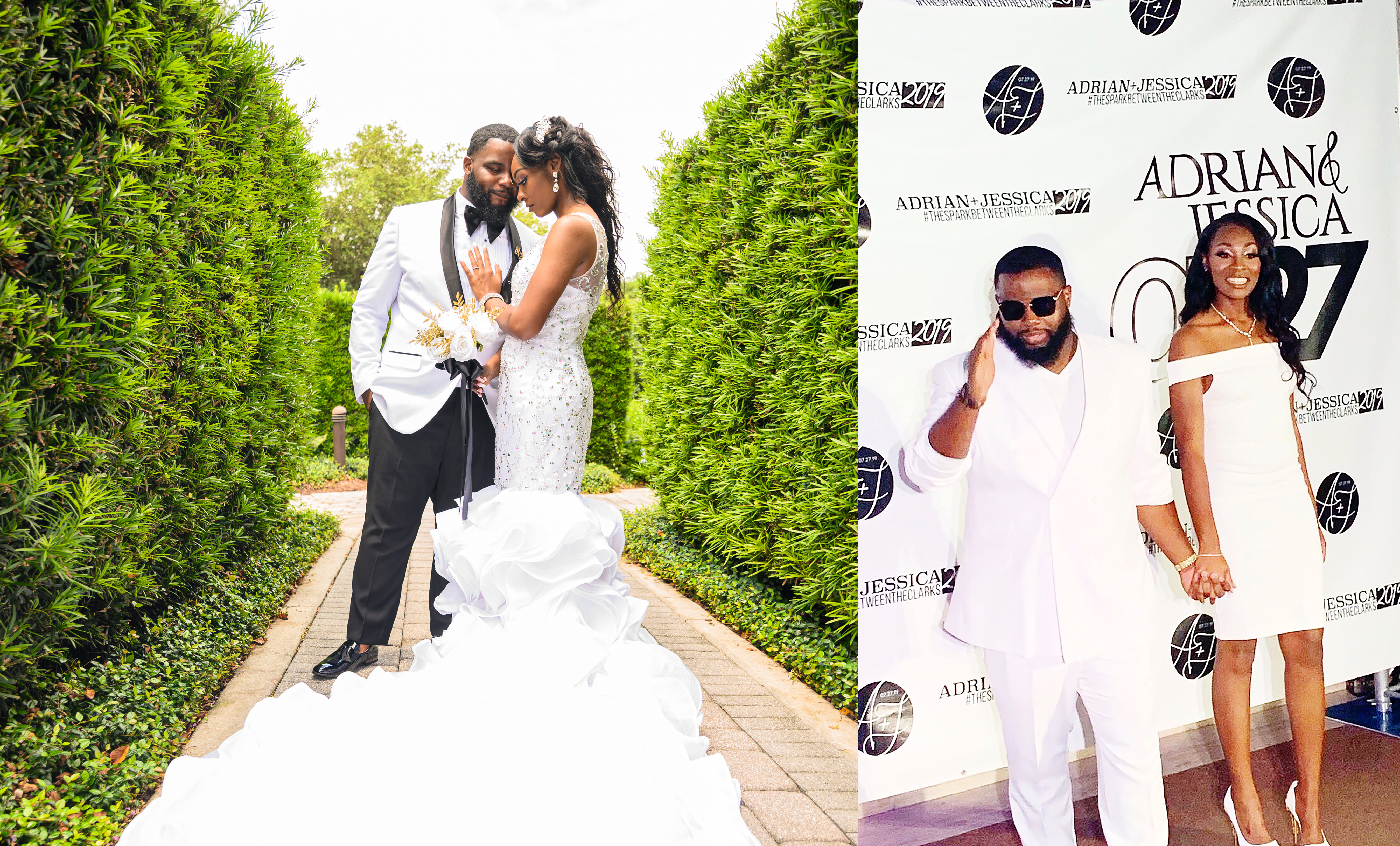 Like most brides, Elizabeth Fechtel had her big day all pictured in her head and knew exactly what she wanted, according to photographer Brian Sumner. Her groom, Daniel Yawman, felt a bit left out and wanted to help. Finally Elizabeth told him he could be in charge of his socks.

Before the ceremony, while taking portraits with the wedding party, Daniel prepared his bride for the big sock reveal.

“He explained the importance of the task he’d been given and how much effort he’d put into his assignment,” Sumner remembers. “On his count, the groomsmen all raised their pant legs to reveal custom-made formal socks with the bride’s face stitched all over them.

“Luckily Elizabeth is a good sport and reacted with laughter—she loved the socks!” 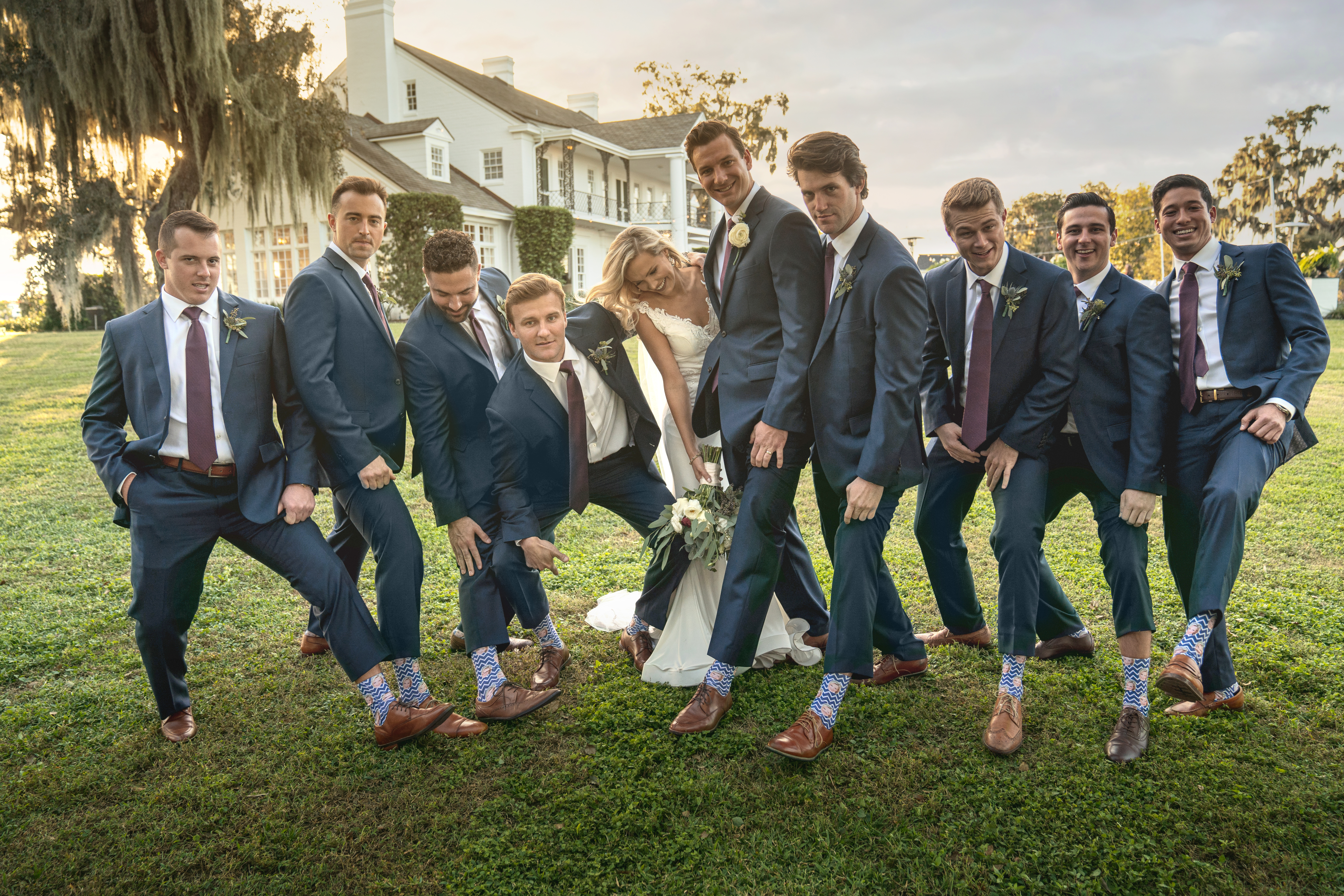 “She started laughing,” photographer Barbara Dawson recalls about the bride. She was photographing the outdoor wedding of Ray and Amanda Butterworth in May 2017 at Lake Weir. “It started raining as she and her father were walking down the aisle.”

Dawson says a thoughtful guest quickly opened an umbrella over her and her camera so she could keep shooting. The groomsmen held large umbrellas over the couple throughout the ceremony.

“When they finished their vows the rain stopped,” Dawson says. “Amanda said the old saying ‘Rain on your wedding day means good luck’ is what got them through the ceremony.” 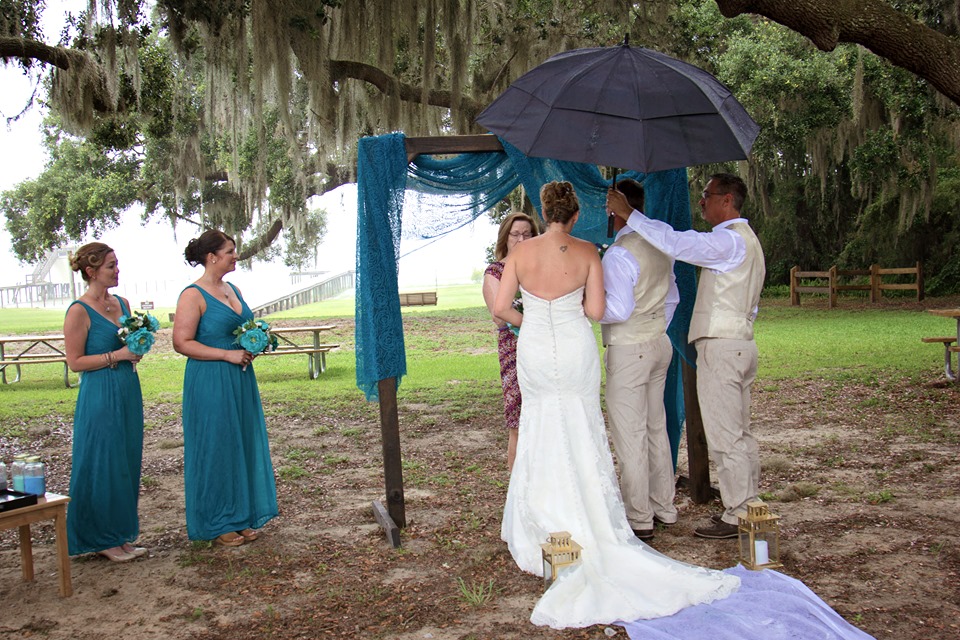 Behind the Barn Door

“Storybook,” “head over heels” and “wildly in love” is how photographer Isabelle Ramirez describes her friends Trenton and Stefani Penuel, whose destination wedding she photographed earlier this year in the North Carolina mountains. She worked with them to create a special private moment.

“Instead of the first look, they opted to use that time for a letter exchange,” Ramirez explains. “Stefani, her mother and I drove down to the barn to capture their sweet moment.” They situated the bride on one side of the barn door, with the groom leaned back against the other side.

“The first thing he said was ‘Hi,’ and she responded, ‘We’re getting married today.’”

The couple exchanged handwritten letters, reading them silently with tears flowing on both sides of the door.

“After they read their letters, they joined hands and prayed,” Ramirez recalls. “It was silently beautiful.” 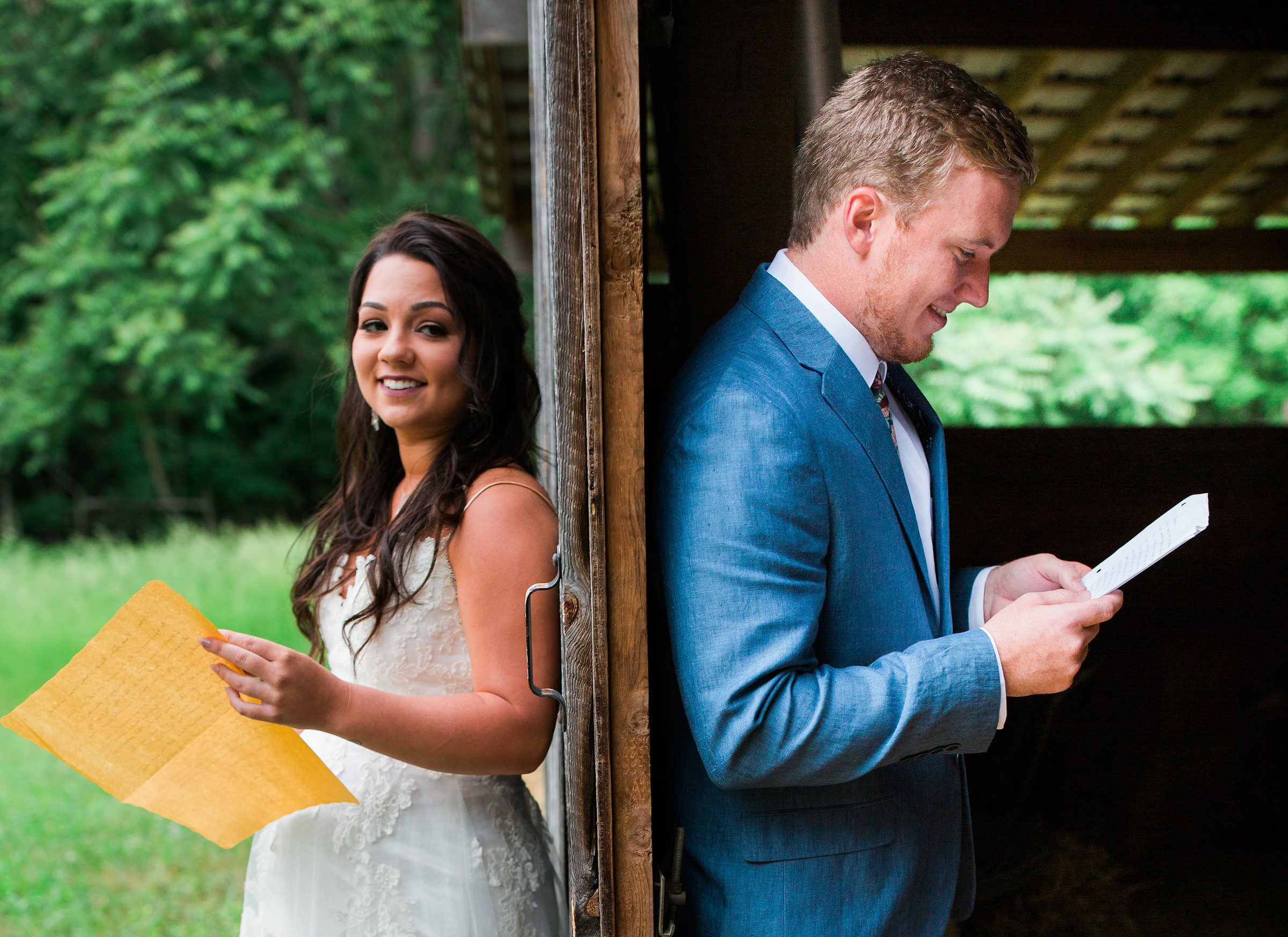 “It was a riot!” photographer Cindy Diaz says of the extra photos she took for local couple Rusty and Kari Fankhouser after their wedding a few months ago.

“We went back to their suite to capture some more intimate pictures,” she relates. Then the groom decided to re-enact Tom Cruise’s signature slide across the floor from the movie Risky Business.

“I must say he pretty much nailed it,” Diaz recalls. “He was game for any pictures. I had a blast with this couple. When he said “risky business” I didn’t have any idea he really meant Risky Business!” 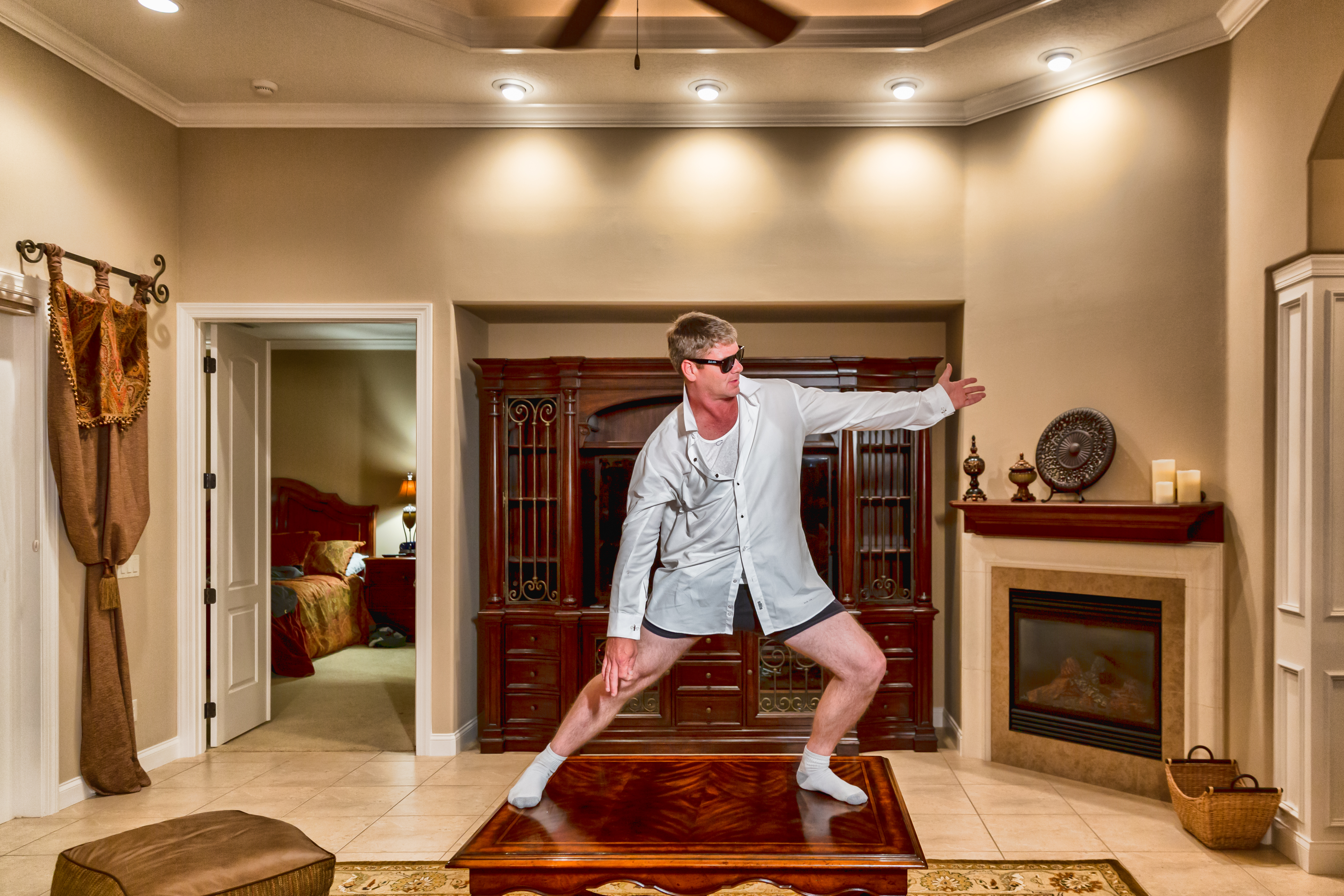