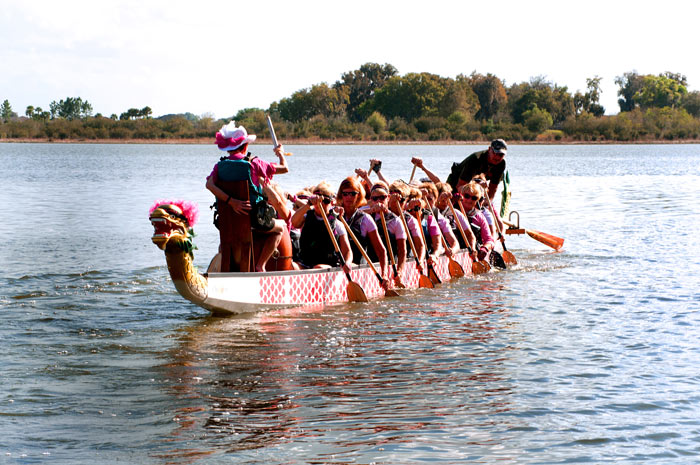 The long, narrow boats seem to glide effortlessly on the glistening waters of Lake Sumter in The Villages. The rhythmic beat of a drum echoes across the water, and sunlight bounces from 20 paddles that strike the surface of the lake in unison. Bystanders along the boardwalks are mesmerized by the paddlers, who are so synchronized that their arms look like one giant mechanism.

And when one of the boats filled with women in pink shirts comes closer to shore, a murmur of admiration hums among several onlookers. These women, most of them petite, are conquering the sport of dragon boat racing—just as they conquered a deadly killer: breast cancer.

The amateur water sport requires upper body strength, balance and endurance. So when Marguerite issued a plea for breast cancer survivors to come try the sport and possibly create their own team, she wasn’t sure what kind of response she would get.

Nearly a year ago, she started a women’s team known as the “Dragon Sisters,” one of seven teams in The Villages Dragon Boat Racing Club. In November, when a breast cancer survivors’ team came from Tampa to give an expo and demonstration at Lake Miona, the shores were lined with women. In a newspaper article covering the event, Marguerite mentioned that she wanted to start a survivors’ team in The Villages. That evening she had 60 phone calls, and by January, she had enough paddlers to form the “Treasured Chests,” a team of survivors whose average age is 65. They will compete as a team for the first time in Florida’s 10th Annual Dragon Boat Festival in Tavares, April 13 and 14.

“Dragon Boat racing is definitely a team sport,” says Marguerite, who is a breast cancer survivor herself. “I tell the girls that we win as a team and we lose as a team. In the meantime, we are getting stronger and having a good time.”

Dragon boat competitions have been a part of ancient folk rituals in Southern China for more than 2,300 years. Dragon boat races symbolized the Chinese virtues of teamwork and cooperation, and exhibiting those virtues blessed the communities with happiness and prosperity. Unlike the evil mythological European dragons, Asian dragons were revered and considered wholesome and benevolent, and the boats were adorned with dragon heads to avert misfortune and calamity and to symbolize strength and vitality. Dragon boat racing only emerged as an amateur water sport in Hong Kong in 1976 and was introduced at select North American festivals in the 1990s. Today, it’s the eighth-fastest-growing sport in the world, according to the U.S. Dragon Boat Federation.

Shortly after the sport gained international interest, Dr. Don C. McKenzie, a sports medicine physician and an exercise physiologist at the University of British Columbia, began a study in 1995 to dispel the myth that women who had breast cancer treatments should avoid repetitive, upper body exercise because such activity could result in lympedema—a permanent swelling of the arm and chest area. Returning women to unrestricted, active lifestyles was Dr. McKenzie’s goal, and he chose dragon boating for his study for a variety of reasons. He not only was able to work with a large group at once, he was also able to monitor how the strenuous, repetitive upper body exercise affected women who had undergone chemotherapy and radiation treatments.

Dr. McKenzie formed the first breast cancer survivors team in 1996 to compete in the Vancouver Dragon Boat Festival, one of the largest in the world. His study, and later studies at Quebec’s McGill University, concluded that breast cancer survivors who participated in dragon boat racing significantly improved physical and mental health and coped better with post-recovery trauma.

The BCS dragon boat team in The Villages exemplifies the goals that Dr. McKenzie set out to reach. The women have become stronger in ways they never expected and have developed a sisterhood of sorts with fellow survivors.

“The team is very cohesive,” says Debbie Strickland, who is a 20-year cancer survivor and the member who has been cancer-free the longest. “We use the same determination in dragon boating that we had to have when we were fighting breast cancer.” 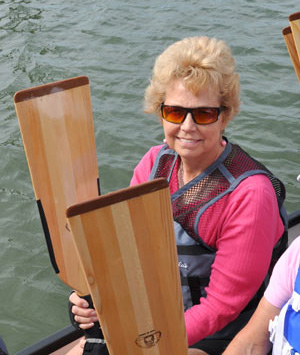 Debbie says that stamina and endurance are often the biggest challenges, especially for new members. However, the women are the epitome of teamwork as their paddles strike a downward motion in unison. Team members support each other, and when someone is having a bad day, the other paddlers pick up the slack.

“The sport is indeed challenging, but it’s also invigorating and makes you feel good,” explains Marguerite. “You can see the transformation of the women’s abilities from the beginning of practice to the end of practice.”

Marguerite’s passion for dragon boating is evident as she leads both women’s teams through twice-weekly practices. In her role as trainer, she is usually found at the front of the boat where the drummer sits during competitions or ceremonial events. The drummer, she explains, is not the person who sets the pace for the boat. Rather, it’s the lead paddler in the front of the boat who sets the pace and the drummer watches them. Every time the lead paddle goes into the water the drummer strikes the ceremonial-looking instrument, providing the cadence that helps the team members maintain the same stroke rhythm.

“The focus is on synchronization,” she explains. “It’s an aggressive stroke, not like canoeing or kayaking. I tell the team to think about something that has made them mad when they are paddling.”

The team member with the real power is the steersman. The members have to trust the steersman, who must know the water currents and wind conditions. He or she is also the boat’s safety officer.

Retired U.S. Marine Lee Cerovak, one of the first members of the Leathernecks dragon boat team, is often found in the steersman position for both women’s dragon boat teams. He has also helped the women with strength training exercises and is an unofficial recruiter.

“I was on the shuttle to the Orlando airport a few months ago when Lee got on with life jackets,” says Susan Chicoine, who was diagnosed with breast cancer in 2004. “I couldn’t help but ask why he was going to need life jackets on an airplane.”

Lee was on his way to teach a seminar about dragon boating, something that two manufacturers hired him to do nationwide following the Leathernecks national championship win in 2010.

“He was a great salesman,” Susan said with a chuckle. “I had never been on any kind of team before, and this has been a wonderful experience, especially the camaraderie.”

Both Lee and Marguerite want to see the sport grow beyond The Villages. They are diligently working to establish an outreach program for other senior communities as well as for young people.

“It’s a safe sport,” says Lee, who will be competing with the Leathernecks United team at the Dragon Boat World Crew Championship in Hong Kong this summer. “Most people are initially afraid they’ll tip over. Once they get over that fear, they discover it’s great exercise and lots of fun.”

It’s late afternoon when the paddlers disembark one at a time. Their muscles may be weary, but their laughter echoes over the docks behind the Waterfront Inn at Lake Sumter Landing. Members of both women’s teams agree the camaraderie overrides a few sore muscles.

“I’m always impressed by the power of women and what they can accomplish,” says Marguerite, who also plans to compete in Hong Kong. “These women are cooperative and enthusiastic.”

Determination should also be part of that equation if Dragon Sisters team members Nancy Bryson andSandra Skopaz are any indication.

“My husband asks me every time I come home from practice if I’m a Marine yet,” says Nancy Bryson. “This wasn’t part of my original retirement plan, but I feel better and stronger than I’ve ever felt.”

Most of the team members agreed that getting in and out of the slender boats can be harrowing, and a little apprehension on the first cruise around the lake is normal.

“But where else can you go and try out for something like this?” asks Sandra. “The environment and Marguerite’s leadership make it very appealing.” 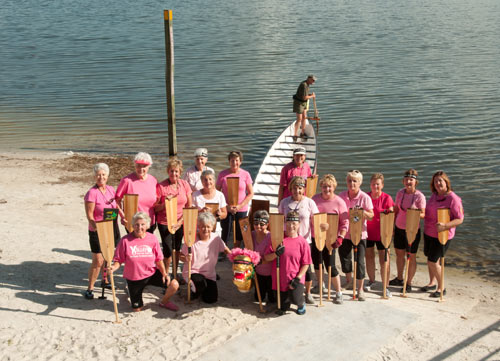 The team members’ average age may be 68, but the Leathernecks know the taste of victory, and it’s especially sweet when the competition is younger—much younger. Amid a few snickers of opponents in their 20s and 30s, the team, named after the protective straps worn by Revolutionary War soldiers during sword fights, paddled its way to a win in the 200-meter sprint in thegrand masters division at the U.S. National Dragon Boat racingChampionships in 2010.

Now, the new Leathernecks United is pumping up to compete in the International Dragon Boat Federation World Crew Championships, scheduled for July 4-8 in Hong Kong.

Members from seven dragon boat teams within The Villages comprise the Leathernecks United, which is coed. The team hopes to have both a standard boat (20 paddlers) as well as a short boat (10 paddlers) in the competition.

“We’re the oldest team to be invited,” says Lee Cerovak, who was one of The Villages’ first dragon boat club members.”We’ll have four straight days of racing, so we are training hard to get ready.”

Strength training to build muscles, practicing paddling techniques and perfecting strategies have made them into a team that now gets more admiration than snickers. Members Lee Cerovak and Marguerite Muller say it’s a once-in-a-lifetime opportunity that they don’t want to miss.

Fundraising events are being planned to help offset the $120,000 needed to send the 40-member team to Hong Kong.

Learn more about the 2012 World Club Crew Championship at idbfworldchamps.com.

Want to see the Treasured Chests team in action?