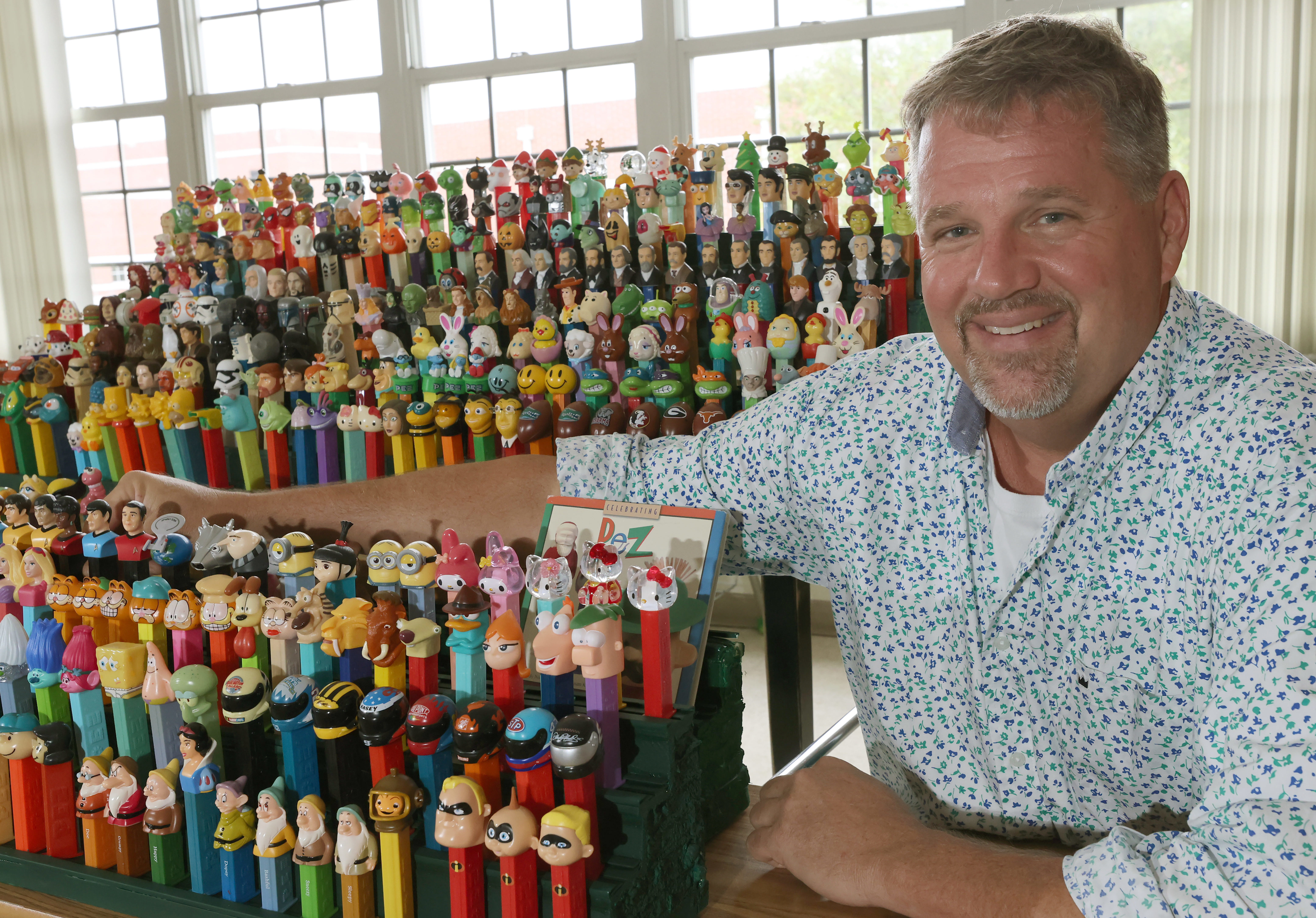 Simple gifts from two students have grown into a colossal collection for teacher David Steffey.

Snow White and all seven dwarfs are there, as are Scooby Doo and Captain Kirk. Down to the left are the KISS band members, the Teenage Mutant Ninja Turtles alongside Black Panther and, in the back, Princess Leia, Handy Manny and the Grinch. George Washington is up front, of course, with Gandalf, Shrek and the three Elvis Presleys.

These are just part of the Pez candy dispenser collection David Steffey has amassed over the past 27 years as a teacher. There now are more than 500 pieces but, unlike most collectors, Steffey did not set out to create this pop culture Pez-a-palooza—this “We Are the World” style celebrity gathering… albeit in the form of shiny plastic personas. This collection was started by two of his third-grade students during his first year as a teacher in inner-city Orlando.

“There’s a story behind everything,” he says, in telling how he now describes his huge collection to new students at Forest High School in Ocala each year. “And this story is about two girls who brought me two Pez, and then two little kids brought me two more and after 27 years this is what happens.”

Pez is the brand name of the candy and associated manual candy dispenser originally created in Austria in 1927. New character heads are created each year, reflecting the latest movies, television shows and trends in pop culture. But Steffey’s collection of Pez almost didn’t happen. Had those two girls not visited him the next year asking about the Pez, current students would not be enjoying the plastic likenesses of Speedy Gonzales, Hello Kitty and Dwayne “The Rock” Johnson.

Steffey says he thinks he gave away those first two candy dispensers to students who were having a bad day. When the original gift-givers showed up asking questions, Steffey played it off by pretending to search desk drawers, even asking them to remind him which ones they gave him.

“I felt horrible,” he said. “This was my first year teaching. How was I to know it was special to them? But it was. I knew I needed to buy those again.” 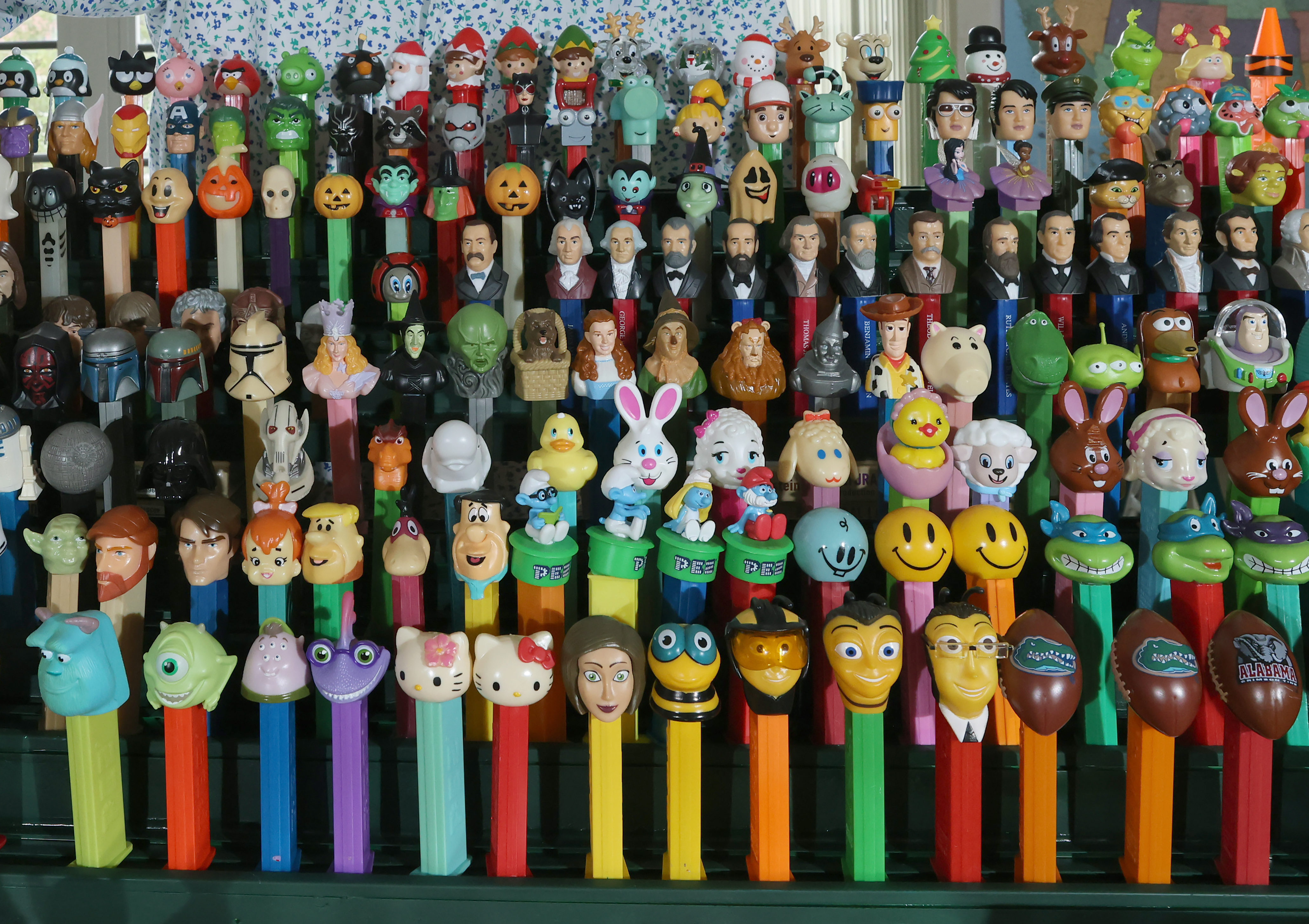 He put those two on his desk and used putty to stand them up. Two became three became four and his collection grew. Soon he built a little shelf to get them off his desk and the display continued to grow, mostly from gifts from students, but also a few from friends, his wife, Tricia, and daughters Jordan and Ryan.

“It hit me at one point: Kids who don’t have anything can pick up a $1 Pez for a teacher to show they care,” he says. And while he enjoys the dispensers, he’s not a fan of the candy so he gives it away. He believes students like to contribute for two reasons: They want to give him something he doesn’t have and their contribution makes them part of the collection.

“We don’t talk about a club, but I think they see themselves as now being a part of this,” he shares. In fact, he still gets messages on Facebook about the Pez from former students who are now adults. 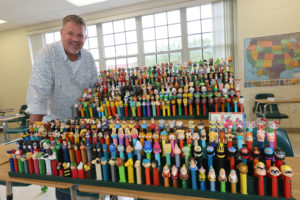 About eight years ago, he started having kids write their names on the Pez dispensers so he could remember who game him what, something he wished he’d done earlier. With such a long teaching career, he can’t remember each student who contributed to his collection, but many of them have stories behind them.

“I don’t look up there and see one necessarily that reminds me of a child, but I look up there and think that’s 27 years of kids who came through,” he says. “And if you think about how many kids you taught, it’s thousands. They still remember this. It might mean as much to them in some ways as it does to me. It’s just fun.”

Steffey was back in his hometown of Ocala, teaching at Osceola Middle School, when his Pez collection grew so large that he decided to make display stands for it. Each lightweight wooden stand is 3-feet wide and has four levels, with lips to hold the dispensers in place. He now has four stands atop the storage cabinets in his new classroom at Forest High School—those are for all the collections and groups like Star Wars, The Wizard of Oz, The Lord of the Rings, Disney princesses and both the old and new Star Trek characters. He has another above his desk area for the solo acts.

The Star Wars grouping is the largest in his collection and the two Yodas are there for a reason. “With Darth Vader, Darth Maul and Darth Sidious, there’s a lot of darkness, so I just thought it would be better to have two Yodas,” he says with a laugh. “I feel like there needs to be a good positive force.”

Star Wars fans can appreciate that reference, but his colleagues, administrators and students are sure to tell you much of the positive force in his classroom comes from Steffey himself, the 2014 Marion County Teacher of the Year. In 2021, he returned to his alma mater to teach human geography to freshmen.

While the Pez collection is not part of everyday discussions, Steffey says, he does use them as part of his teaching when the occasion rises.

“I never put them in a lesson plan,” he offers, “but somehow it always seems to pop in at some point during the year.” Being in his last decade of teaching, Steffey is not sure what will happen to the collection once he retires. Taking the large collection home, he says, is not an option he and his wife want to think about.

“They’re not meant to be put away in a shed. They’re meant to be seen,” he says. “In the future I’ll have my eyes and ears open for a place where they can land when I’m done. They really are cool.”