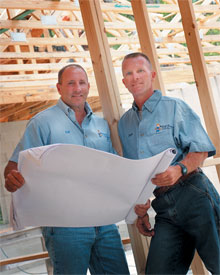 Having worked in Marion County for 22 years as a framer and builder, Bill Benson appreciates the value of team work. Working on residential, commercial, and remodeling projects requires constant collaboration between the builder, architect, and a team of workers to ensure a superior finished product. Bill says his reputation is a reflection of working with such first-class individuals.

“I’ve learned so much from each builder and their respective talents,” says Bill, “And I’ve learned to face challenges in the construction industry by coming up with new and better ideas.”

Bill is quick to credit his long-term success to his Marion County friends and colleagues. Individuals like Mike Finn, Rick Wilcox, Jamie Schatt, Pete Adolf, J.C. Morton, Gregg Collins, and Jeff Abbott of Mega Construction are at the top of Bill’s gratitude list for providing guidance and support as he grew his building business.

“I also appreciate the city and county building departments, engineers, and architects who believed in my ideas and allowed me to go forward,” adds Bill.

However, while Bill modestly attributes his success to others, his exemplary construction work speaks for itself. Originally working as a framer to other builders, Bill now holds a certified building contractors license, specializing in customized residential building. Clients who work with Bill usually have only one complaint.

“I’ve been accused of going above and beyond the call of duty,” smiles Bill, “And I take that as the ultimate compliment.”

Calling himself a “start to finish builder,” Bill says the majority of his current work is in upscale residential, both in new construction and remodeling. His nine crew members work hard to make sure every project is built to meet the client’s needs and completed on time. Some of Bill’s employees have worked with him for more than 20 years — a clear example of Benson’s commitment to his team.

Bill also keeps his ties in the remodeling industry, because he recognizes the growing market for homeowners desiring to improve their existing homes.

“My framing background goes together well with remodeling, and I hope to move more into residential remodeling,” he adds, “But, I’ll always be available for framing for the builders who gave me my start.”

A hands-on company owner, you’ll find Bill hanging doors and framing right next to his co-workers. A believer in “old style of carpentry,” Bill works with his team so he is familiar with every aspect of a project. Along with his wife, Donna, Bill says he wouldn’t be where he is today without the constant help of fellow builders, co-workers, sub-contractors and clients.

“With the wonderful team I get to work with, how can I go wrong?” he asks with a smile representing many years of appreciation and gratitude.