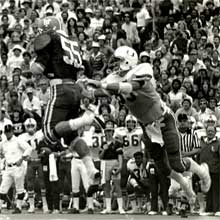 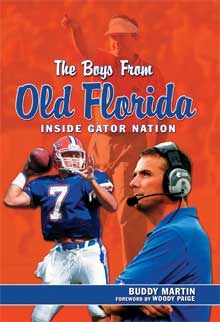 Former Ocala Forest High School football star Scot Brantley has sure made his hometown proud. Following a standout tenure at the University of Florida, he graduated to the NFL and the Tampa Bay Bucs. How did he do it? In this excerpt from The Boys From Old Florida: Inside Gator Nation, longtime UF writer Buddy Martin tells us about…

Of all the ugly times endured by Florida football fans, never had there been a season like 1979. Since the Gators began playing a full regular season schedule had they gone winless just once — that 0-9 campaign in the “Golden Era” of 1946.

Some 26 players would be kicked off the team, others were demoted. In sorting out players, decisions had to be made on the injured and who may or may not be able to perform up to expectations without permanent harm to their physical being. Such a case was Ocala’s Scot Brantley, once one of the hottest prospects ever to come out of the state of Florida.

A two-time All-American at Ocala Forest when the Wildcats won back-to-back state championships in 1974-75 — and Parade magazine’s Defensive Player of the Year — Brantley had been recruited by the likes of Woody Hayes, Bear Bryant, Vince Dooley, and all the premier schools in the country. That rarely happened to an athlete from Florida. His decision to become a Gator under Doug Dickey was a hugely popular one that was fostered, in part, by his fondness for defensive coordinator Doug Knotts. Scot also had a burning desire to carry on the legacy of excellent linebacking by players like Ralph Ortega and Glenn Cameron.

Brantley was proud to represent his hometown as well.

“There were so many great Gators from Ocala,” said Brantley. “I thought of some of the older players — Fred Montsdeoca and Red Mitchum. I knew since I was 16 years old that I would be at Florida. In a sense, you were representing them when you put on that uniform. And they said, ‘Hey, that’s the boy from Ocala!’ I wanted all that.”

One of the Gators from Ocala was his brother, John. That Scot was able to play for three seasons on the same college team with John, a quarterback, was very also meaningful. Scot and John had been playing contact football since they were seven and eight years old in a South Carolina midget league. When their father John Jr., a bridge-builder, moved to Ocala in 1970 and found out there was no midget league program, he immediately helped start one.

“And that,” said Scot, “was one of the main reasons Ocala Forest won those back-to-back state championships.”

A hopeful feeling abounded that five-star recruits like Scot Brantley would make the difference for the Gators. Many people felt that with Brantley and other young defensive stalwarts on the way, Dickey might be able to turn the team around. Early expectations were met as the 1976 season started with six wins in seven games. Things fell apart against Georgia in a 41-27 loss, after Florida had led at the half.

“I can’t help but think back to that Georgia game,” said Brantley. “We were going to win our first SEC title. We were taking ring sizes at halftime. And I will never forget seeing Erk Russell [Georgia defensive coordinator] come out a halftime. He was staring across the field, and you could see the blood streaming down his face. He had beat up on a locker at the half.”

Despite that, the Gators could claim a piece of the SEC by beating Fran Curci’s Kentucky team, which they failed to do. They lost to the Wildcats, 28-9. Still, Florida posted a respectable 8-3 record and played in the Sun Bowl, losing to Texas A&M, 37-14.

For Dickey, it never got any better.

The 1978 season began badly as the Gators went 1-3, ending with a thud as Dickey’s team was thumped by Florida State, 38-21, and lost a heartbreaker to Miami, 22-21. Dickey was fired before the Miami game, but coached anyway, and posted a 4-7 record.

For three years as a starter, Scot lived up to his billing. Brother John started a few games in 1977, switching off with Terry LeCount, and by 1978 had won the job. In 1979, John was beaten out by Tim Groves, Tyrone Young, Johnell Brown, and 5-foot-8 Larry Ochab before getting injured (Young went on be a very good receiver. Brown became a runningback; Groves a safety; and Ochab stayed at quarterback.)

Along came Charley Pell and all his enthusiasm. Scot was a fearsome All-SEC linebacker with All-American credentials. The dominating 6-foot-1, 230-pounder was already one of the leading all-time tacklers in Gator history when he was injured in the second game against Georgia Tech. (He wound up eight tackles short of the career record.)

In the early 1970s, Dickey had converted Florida Field to artificial turf. “Doug’s Rug,” as it would be known. This would factor in Brantley’s serious head injury. As he was about to make at tackle, he slipped on the turf.

“I remember it was a muggy, humid day at Florida Field, early in the game, when they [Tech] ran a fullback-lead play,” Brantley said. “I got kneed upside the head, and that’s the last I remember.”

Trainer Chris Patrick and Pell came running out on the field with concerned faces. Brantley was kept in Shands Medical Center overnight for observation. When they did a CAT scan, they found a bruise about the size of a small coin. At first Brantley was told he’d miss a game or two.

Alabama was two weeks later. Scot Brantley never came back. He was called to a meeting in Pell’s office. He knew when he saw his mother and father, brother John, Pell, and the trainers in the room that the news wasn’t good.

“‘We made a decision,’ they told me,” Brantley said. “‘You’re going to have to miss the season.’ I said, ‘Lord of mercy, you must be kidding me.’ And that’s the way it went down.”

Ironically, John was injured in the same game as his brother, ending his career as well.

With the loss of the starting quarterback and an All-SEC linebacker, the fortunes of Gator football also took a downturn. The next week, they lost to Mississippi State, 24-10, just the beginning of a year without the taste of victory for Charley Pell.

“I loved Scot Brantley,” Ward Pell, Charley’s wife said. “When he went down and went out, Charley did that out of pure parental love. He would have wanted somebody to have done it for his son. Charley said, ‘He is not going to die on that football field.’”

Brantley, of course, did not die. His brain injury healed, and he was able to go on and play eight years for the Tampa Bay Bucs. He then became the team’s radio color analyst through the 2005 season.

The loss of Brantley personified the first-year gloom, because he was going to be the first of many stars in Pell’s superb, hard-rocking defense. But he was not Pell’s last player to be lost via injury.

Probably no other game symbolized the frustration of Pell’s first season than the loss to Florida State, a team he would eventually beat in each of his last three seasons. On November 24, 1979, however, the Seminoles boasted a 10-0 record against Florida’s 0-8-1. A win here would have been the greatest upset in the history of the series. The cards seemed stacked against the Gators. FSU needed what is deemed by most observers as a one-hop interception to kill off Florida’s rally and win, 27-16.

Team physician Dr. Pete Indelicato experienced some tough times with Pell, but none tougher than the day the Gators lost their tenth game of the 1979 season in Miami, 30-24. As they were walking off the Orange Bowl field together, Pell turned to “Dr. Pete” and said, “Well, Doc, now you know what it feels like to be on the bottom.”

“He was a special coach to me,” said Indelicato, “A man’s man. He’d smoke that cigarette, and he’d look right through you. You didn’t BS him. He didn’t fumble around with words. He wanted a direct answer in as few words as possible.”

The bottom, however, was yet to come. This was just one more blow for Pell, who had also encountered drugs issues with players, theft among teammates in Yon Hall, and racial disharmony. The loss of Brantley’s leadership was huge.

Scot Brantley, who hosts his own sports talk show on ESPN 1450 in Tampa, will team up with Martin each Saturday at all Gator games in the state for “The Buddy Martin/Scot Brantley Tail-Gator Show” on ESPN radio, AM900 WMOP/Ocala and AM1230 WGGG Gainesville. The Boys From Old Florida: Inside Gator Nation is available at local bookstores. Personalized copies may be ordered via e-mail at buddyshow@aol.com