Proceeds from the sponsorships of 15 new painted equine statues in the Horse Fever 20/20 project will benefit local artists and arts groups. 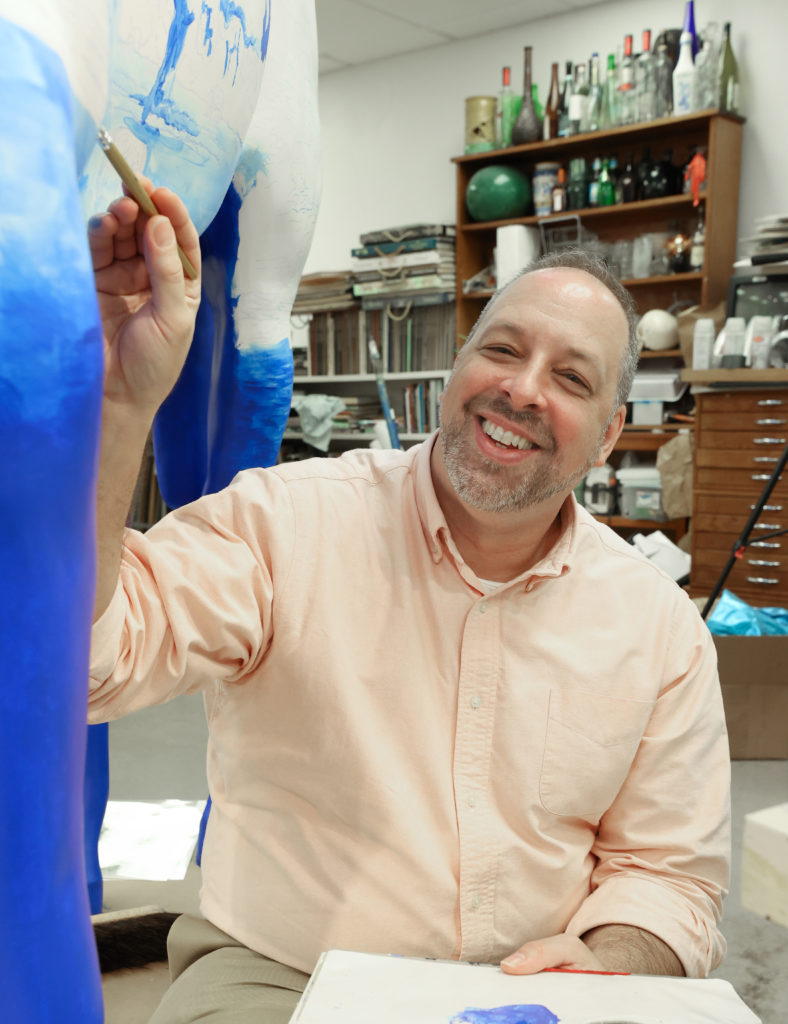 Margaret “Peggy” Watts has been a lover of nature since she roamed the woods of northern Maine as a child. When she moved to Florida nearly 70 years ago, she soon was traipsing trails around Ocala. Many of her artworks have been imbued with the spirit of her beloved outdoors, including Secret Places, the statue she is painting for Horse Fever 20/20.

Tyrus Clutter, an artist and associate professor of art at the College of Central Florida (CF), said the inspiration for his horse, Ocala: heART of Florida, came from an artwork he had seen locally, but with an added emphasis on the arts.

The two are among the artists painting 15 horses for the Horse Fever 20/20 Anniversary Herd. Horse Fever was launched in 2000 and was the seed for formation of the Marion Cultural Alliance (MCA). That was followed by Horse Fever in Motion in 2005 and Horse Fever II in 2011. Over those 20 years, the horses have become beloved symbols for the Horse Capital of the World. Many are on display in public areas and others are on private property. Through money raised by the sale of the horses, the MCA has provided thousands of dollars in grants to local artists and arts organizations.

Secret Places is the third Horse Fever horse painted by Watts, all in her home studio. Her previous horse statues have found homes near and far: Ocala Sun is now in Maryland and Old Ocala is on a local horse farm. Secret Places is sponsored by an anonymous donor and Watts does not know where it ultimately will be placed.

Secret Places will have a scene of one of her favorite local swampy areas on one side and Scott Springs Park on the other. The city park has a natural grotto and now features biking and walking trails and a playground, which is nothing like what Watts first saw.

Watts, with her late husband Bernard, have two sons, James and John.

“When my youngest was a Cub Scout, before you got to Scott Springs on Easy Street, there was a watermelon field and a dirt road,” she explains. “In the back was an old Indian village and we used to dig arrowheads. The Cub Scout leader told me, ‘Just go down the path and you’ll see big holes all over and people popping up out of them.’ The arrowheads were in the sides of the holes. I collected a whole bunch of them, well, my Cub Scout did.” 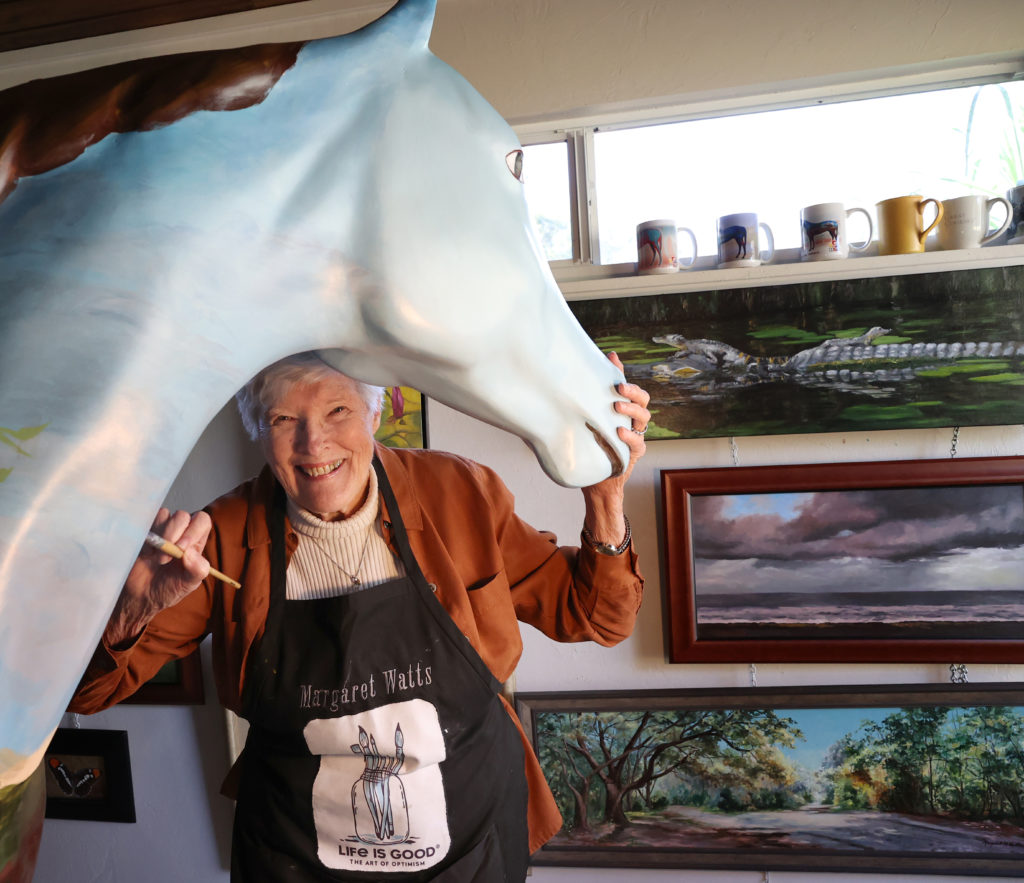 Breaking into laughter, she adds, “I enjoyed Cub Scouts more than the kids because it kept me in the woods.”

She laughs again as she explains that when she first came to Ocala, she worked at the courthouse downtown and often would get lost.

“My employer would draw me a map and say, ‘Here’s how you get to the post office,’” she recalls. “Of course, I’d get lost. In the woods, I know my directions if I can be around some trees. But you get me downtown and I don’t know which way anything is.”

Watts is highly regarded for her landscapes, historic venues and religious-themed artworks. She says the challenges of painting on a canvas versus a horse statue are considerable.

As she displays three photographs of the swampy area taped together to show a wide vista, she notes it was difficult to keep a “level horizon” because of the curvature of the horse.

Clutter also says painting on a statue is challenging.

“What I chose to do for this is representational,” he shares. “There are some architectural elements and when you put that on something not completely flat, it alters the perspective.”

Clutter, a native of Michigan, moved to Florida in 2008 to be near family in Lecanto. He has been heavily involved with arts groups in the community, but pulled back to “get back to doing my own artwork.”

He is known for printmaking and says his art is “mostly figurative, with theory behind it, more academic.”

“This isn’t typically what I’d be doing,” he explains, stroking the side of the statue, “but I decided it was time to do a horse since that’s what we do in Ocala.”

Ocala: heART of Florida is sponsored by the David and Lisa Midgett Foundation. The couple are well known for their support of the area’s arts endeavors.

Clutter painted the horse inside the Dassance Fine Arts Center on the CF campus, in between conducting classes via Zoom. He said the current statues are much heavier than the prior ones and it was a challenge to get the horse up to the second floor.

“It was not going in the elevator,” he says with a laugh. 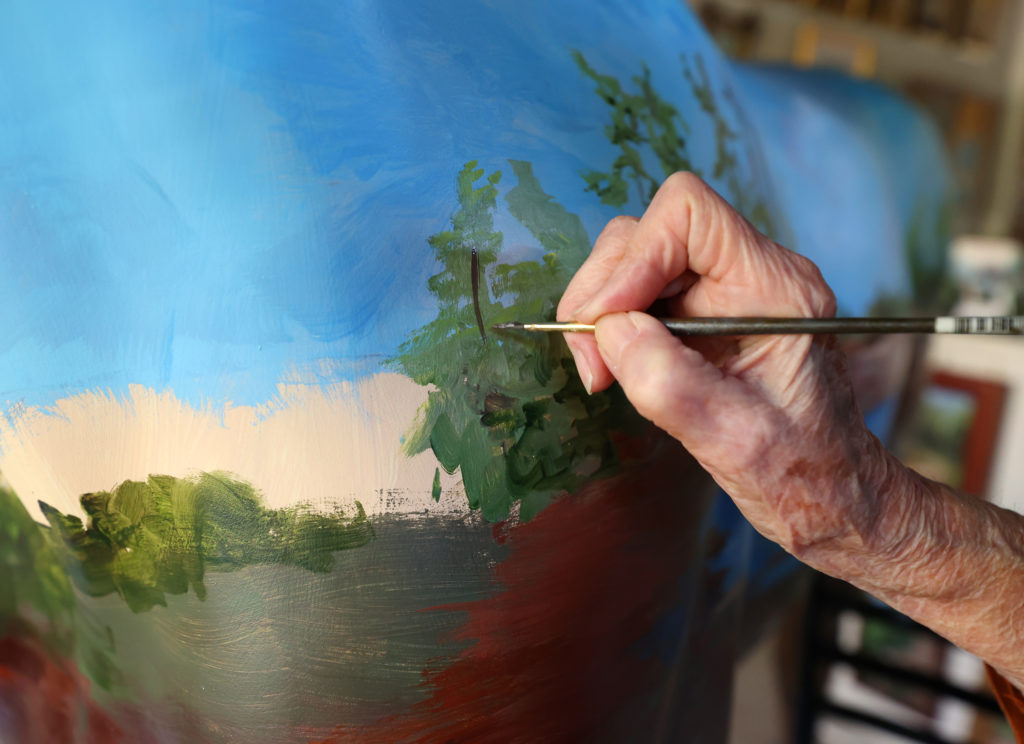 As for the impact of Horse Fever, “It’s been 20 years now and the arts have really picked up in Ocala, particularly in the last decade,” he offers, “so it’s exciting to see new ways of dealing with the horses and new artists working on them.”

He believes public art projects, such as the horses, murals on buildings and outdoor sculptures make people want to be in an area.

“It draws people to a community because they feel enlivened and that something is really happening in that space,” he offers. “Ocala has worked hard to do that and the first things like that were the horses 20 years ago. It is good to see it coming back full circle with another round of Horse Fever.”

“Based on the calls, emails and social media posts, the community is very excited to welcome this fourth Horse Fever herd,” says MCA Executive Director Jaye Baillie. “One of my favorite aspects of this two-decade long public art project is the interaction with the artists. Throughout the region, the blank canvases are coming to life through their creativity, some creating their first horse, many returning to continue their legacy with the Horse Fever project.”

A “Meet the Herd” family day will be held from 10am to 4pm on February 13th at the “stable,” the Transformco facility at 655 SE 52nd Avenue, and will include activities for children.

Horse Fever 20/20 co-chair Laurie Zink, who has been involved in all of the endeavors, wants people to know the event will be “very socially distanced.”

“The horses will have their own pastures, so to speak,” she states. “This is a chance to see them all in one place and feel safe. And when we take off their blankets, I hope everyone is gasping in surprise.”

From February 28th to March 28th, the herd will be on view at On Top of the World’s Circle Square Cultural Center.