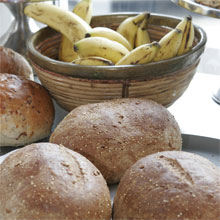 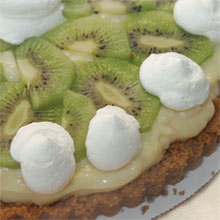 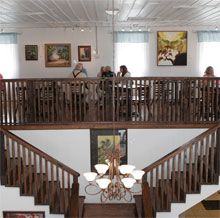 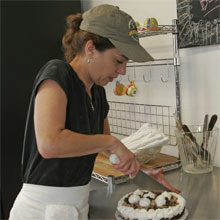 We were women on a mission. The goal: to find carbohydrates, and fast. Time was of the essence. We needed a “fix” and we needed it bad.

But not just any carbs would do — “pre-packaged and preserved” wasn’t going to cut it.

We’d heard about a spot in downtown Ocala with the kind of warm, nourishing, made-from-scratch, nothing-artificial-added carbs we were craving.

“Real good guilt starts here.” We saw that sign in the window and knew we were in the right place. The heavenly aroma of fresh bread, baked goods, and hot coffee enveloped us the moment we walked through the door of The Primary Oven.

Just goes to prove — you gotta know where to go for what you need.

If there’s one thing Kelley Welsh knows, it’s baking. A number of years ago, the Florida native made a name for herself in Ocala as The Real Baker. Her custom cakes, pies, and bakery items achieved cult status among a wide base of repeat customers who didn’t mind ordering well in advance to secure their favorites.

Her expertise in the kitchen is no surprise. Although not formally trained, Welsh spent enough time poring over cookbooks, putting up with “diva chefs,” concocting her own creations, and learning from her culinary mistakes to support herself as a chef on private yachts. After moving to Ocala in 1997, she worked as the private chef for New York Yankees owner and local Thoroughbred legend George Steinbrenner.

After finding someone to fill her shoes, she left her position with Steinbrenner to fulfill the dream of opening her own bakery, which she did lucratively for four years.

When she closed The Real Baker early in 2002, Welsh pursued her other passion: art. She tried her hand at fused glass, finding success and satisfaction in creating useful and decorative objects.

“Whether it’s raw glass or food ingredients,” says Welsh, “what I like best is making something out of nothing.”

Eventually, the siren call of the kitchen lured Welsh back. This time, she wanted more than a bakery alone.

She and Darren Parker, her partner in life and business, invested in an old, downtown storefront building with the goal of turning it into a busy breakfast and lunch spot.

The Primary Oven was born.

Memorable because of its striking native coral stone front, the two-story building at the corner of southwest Broadway and Pine Street has been empty for so long (a good 25 years) that you can’t even refer to it as the old “whatever” building. The once-forgotten structure bumps up comfortably against the downtown Ocala Police Department substation, and at one point served as a warehouse for Brother’s Keeper.

Welsh and Parker opened the doors to the Primary Oven on June 7, 2006, with no fanfare and no advertising. But that didn’t stop a faithful base of clientele from developing almost overnight.

Open at 6am Monday through Friday, the Primary Oven soon answered the prayers of caffeine-starved commuters. In addition to “regular” coffee, the shop serves cappuccino, espresso, lattes, and hot tea. The fact that customers could grab a warm, from-the-oven scone, muffin, or strudel to accompany the coffee quickly proved a winning combination.

But Welsh and Parker didn’t stop there.

In a remarkably short time, they’ve carved their own niche in the downtown lunch market, satisfying both sit-down and to-go customers.

On any given weekday, The Primary Oven serves three or four entrees, including one vegetarian creation. On the day my friend and I came seeking our carb fix, the lunch options included a crab quiche, a salad of mixed greens topped by Welsh’s tantalizing “Black Beauty Mojo Elixir,” and sliced pork tenderloin with pesto on rye. (For the record, our carb craving was satisfied handily by the signature “parker in the house” rolls, the homemade bread in the sandwich, and the crusty foccacia bread croutons topping the salad.)

Unlike some quick lunch spots, The Primary Oven doesn’t serve its meals on paper or plastic.

“We serve on real plates with real silverware,” says Parker. “I’m not putting Kelley’s quiche on a plastic plate.”

True to Welsh’s artistic inclinations, she and Parker decided to highlight local artists in the loft-like second story dining area. Working through the Marion Cultural Alliance, they contacted a number of artists whose works now hang, gallery-style, upstairs. All artwork is for sale and the variety of mediums is intriguing. You may find oil paintings, photography, jewelry, pastels, glass work, and sculpture.

“We wanted to do something different,” says Parker, who was formerly a jockey and now trains racehorses in addition to working the “front of the house” for Welsh and handling the bookwork. “We wanted to make the whole atmosphere a place where people would want to come back.”

Downstairs, the open kitchen proves that cleanliness is a priority. The glass case of desserts is an attention getter.

Depending on the day, what you’ll find on the shelves varies. Most days, Treasure Bars will be among the offerings. Don’t pass these up. The sweet, crumbly topping is reminiscent of an old-fashioned crisp, while the bottom layer may feature fruit or chocolate. Either option is worth devouring. Forget Wheaties. These babies are the “breakfast of champions,” according to Welsh.

There is usually always a cheesecake, layer cake, often a pie, and usually a selection of other goodies. Forgoing the electric mixer, Welsh hand-stirs all her cakes, even the cheesecakes.

“It takes longer,” she notes, “but it makes the result so much lighter and fluffier.”

Blondies (“We call them clueless brownies,” laughs Parker) and chocolate napoleons are popular dessert staples. Graeter’s homemade ice cream, flown in from Cincinnati, has created its own fan club for those who can’t find the rich, creamy treat anywhere else. Parker always orders several flavors, but good old vanilla can’t be beat if you want an accompaniment to your Treasure Bar or a slice of pie.

“Call ahead,” says Parker, “and you can order any cake or dessert you want.”

Touches of Welsh’s artwork are found throughout the restaurant, and she admits she still dabbles in glass creations in her spare time.

“We’re having fun doing this together and we’re both very committed to it,” says Welsh, “but we don’t want the 80-hours-a-week-married-to-the-business thing. Our goal is to keep it fresh and creative and never let it get boring.

“If it gets boring,” she emphasizes, “you might as well lock the doors.”