The Appleton Museum of Art is currently hosting an exhibit that highlights art created by Black artists from across the U.S., curated from the Kerry and C. Betty Davis Collection. Through the Memories & Inspiration exhibit, these visionary home art collectors are illustrating a rich history and redefining the way African American art is appreciated, understood and valued. 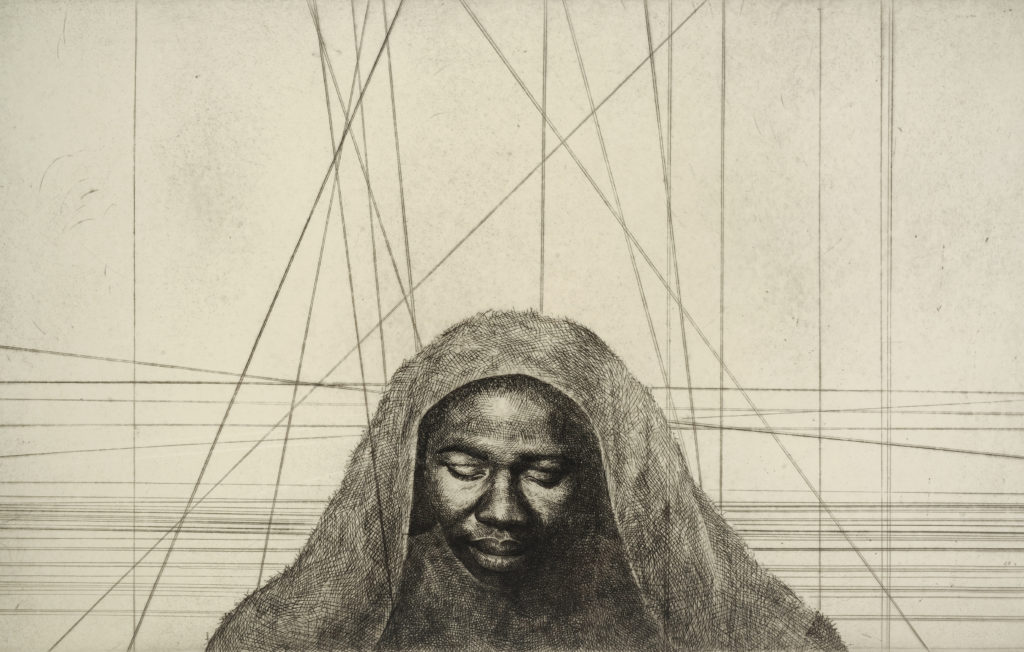 The screen print on paper profile of the proud Haitian military general in his bright orange and red full-dress uniform resonated immediately with Kerry Davis. So much so that it became the first art piece he bought. And African American artist Jacob Lawrence’s General Toussaint L’Ouverture would eventually come to command an art collection some 300 pieces strong, 35 years in the making.

“Early on in my art education, I became a Jacob Lawrence fan. Then I saw an ad in an issue of the International Review of African American Art announcing a Lawrence series on Toussaint L’Ouverture. That particular depiction of General Toussaint just connected with me,” recalls Kerry, a self-described Georgia boy, of that milestone 1986 purchase. “Here was a proud Black man who loved and fought for his people in this grand uniform. Well, I spent a great deal of my life as a Black man in a uniform. I was a Cub Scout, a Boy Scout, in the U.S. Air Force and then a U.S. Postal Service postman for 30 years in Atlanta. So, I felt like a kindred spirit in uniform.”

Kerry paid $750 for General Toussaint L’Ouverture and notes with a chuckle, “On my postman’s salary, that was a lot of money to spend on a piece of art.”

With no formal art background, Kerry initially began acquiring art to decorate his first house after leaving the Air Force and becoming a mail carrier in Atlanta in 1980.

“I wanted art that reflected my identity, my culture and experiences as a Black man,” he reveals. “I began going to the annual Exhibition of Paintings, Prints and Sculpture by Negro Artists of America at Atlanta University (now Clark Atlanta University). That was the beginning of my African American art education and where I first saw Jacob Lawrence’s work, as well as that of Romare Bearden.”

As fate would have it, Kerry met noted African American photographer Reginald McGhee in the latter’s Atlanta antique store. It turned out that McGhee, who was originally from New York, knew Lawrence and Bearden, sharing those stories with Kerry. McGhee also helped him acquire David Driskell’s book Two Centuries of Black American Art, which was the basis for his now extensive collection of African American art books.

“David Driskell’s book and Alain Locke’s [book] The Negro in Art were a revelation to me. Only then did I begin to grasp the scope of African American artists and their art,” explains Kerry. “I felt like I had to understand the artists to best understand their art.”

To that latter end, Kerry employed his carpentry and handyman skills.

“Reginald introduced me to his large network of artists. I then took it upon myself to spend as much time as I could in their studios,” he recalls. “Since I was a carpenter, I could make frames for them and do other odd jobs in exchange for art. It was a great barter system; I continued my education, got some art and the artists got support.”

And even when he was on his mail routes, if Kerry delivered anything art-related, he struck up a conversation with the homeowners. He points out that “often I was invited inside their homes to see their art and I gained new friends who were as passionate about art as I was.” 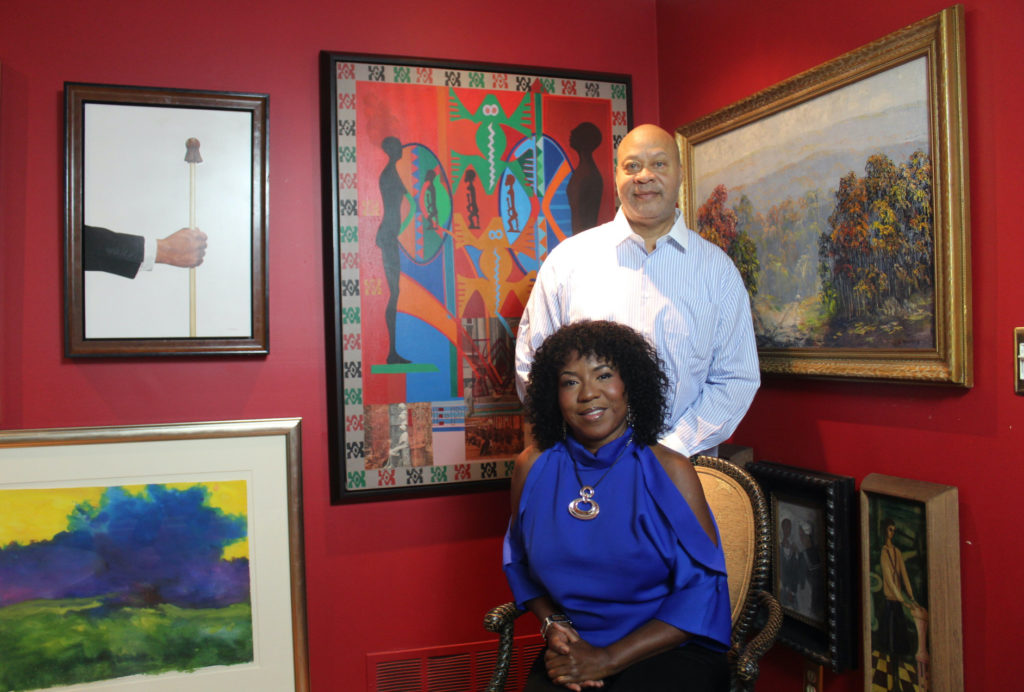 When Kerry met Carolyn Betty Frazier, the woman who would become his wife, she discovered his ever-growing art collection. Betty, a now-retired television news producer, recounts, “A friend told me about Kerry and his art collection. Like him, I had bought a few modest art pieces to decorate my house, so I was intrigued. But, of course, when I actually saw Kerry’s collection, I was so impressed. And his passion for art was contagious.”

Apparently, Betty was equally impressed with Kerry, as the couple wound up marrying in 1994. McGhee told them about a split-level home that was for sale in his neighborhood; they bought it and live in it to this day. The house, where daughter Karlye and son Kerry Jr. (KD) grew up, and their art collection, grew larger, slowly became a social center for artists, collectors and others interested in art.

“We later came to realize that people wondered how we could afford to collect art on our salaries. But we are just naturally people who have always lived a modest lifestyle,” Kerry, who retired in 2012, points out. “It wasn’t a matter of doing without because we collected art. Remove our art collection and we would still be people who prefer to drive an economy car instead of a luxury car. But art did enrich our lives in so many ways.”

One of those ways was traveling extensively, including to Africa and Europe. And, yes, there was always art at the center of their travels.

“Every culture in the world has art connected to it and we wanted to experience that firsthand,” says Betty, adding with a laugh, “And, of course, we always came home with new pieces.”

The size and depth of the Davis collection garnered publicity and led to their first exhibit at Clark Atlanta University in 2016. The following year, Washington, D.C.-based International Arts & Artists approached the couple about a traveling exhibit. It would take International Arts & Artists more than two years to curate the Davis collection from 300 pieces to 62 for the exhibit. The Memories & Inspiration exhibit began touring in January 2020.

“We decided to partner with International Arts & Artists because we wanted to make an art exhibit available to smaller venues that maybe couldn’t normally host such an exhibit,” Kerry shares. “And maybe that would expose people to African American artists and their work who wouldn’t have that opportunity otherwise. We wanted to share the joy that art has brought to us.”

Appleton Museum of Art Director Jason Steuber called out to the Appleton’s “20-plus years of successfully showcasing solo and group exhibitions of African American artists” as part of the excitement in bringing the show to the museum.

“We are honored to share the Memories & Inspiration exhibit with our community,” Steuber says.

Memories & Inspiration is on view through March 28th. A free talk with Kerry Davis and African American artist/art scholar Kevin Sipp will take place on Zoom in conjunction with the exhibit.

When asked to name four favorites included in the exhibit, Kerry Davis’ choices were perfect examples of the wide range, from artists to medium to subject matter, of his collection. And he has a story to go with each piece.

Untitled, 1974 oil acrylic on rice paper by Sam Gilliam: “Oh, Sam Gilliam is a national treasure. And this piece is quintessential Sam Gilliam,” says Kerry. “Betty was working on a television production in Washington, D.C., where Gilliam lives, and I joined her. A friend arranged a visit with Gilliam in his studio. He graciously made that piece affordable so we could buy it.” 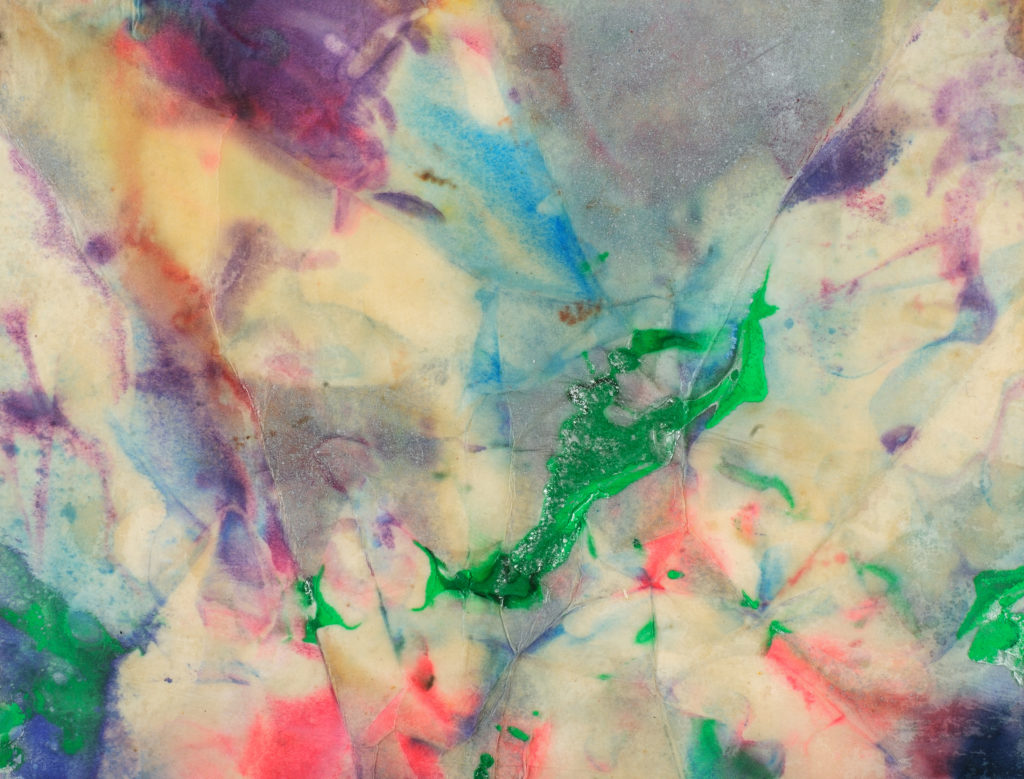 She Wore Her Family’s Quilt, 2015 oil on canvas by Sedrick Huckaby: “African American artist Kevin Sipp introduced me to Sedrick Huckaby’s work when Kevin was an artist in residence at Hammonds House Museum in Atlanta. Huckaby’s murals of quilts are amazing,” explains Kerry. “Those quilt paintings took me back to my childhood. We always had handmade quilts in our house. And we saved clothing remnants for the ladies in our church who made quilts for newborns. I went to Fort Worth, Texas, to meet Huckaby and commissioned him to paint my piece. It really represents the Memories & Inspiration title of our exhibit.”

Lily C., 1973 etching by Charles White: “I can’t draw a straight line, so I really appreciate someone who can draw,” notes Kerry with his easy laugh. “And all of White’s work represents people of color with such dignity. Believe it or not, I bought this piece on eBay. I couldn’t believe my good fortune.”

Kerry’s Painting, 2015 abstract oil on canvas by Freddie L. Styles: “I’ve known Freddie for over 30 years. I spent a lot of time in his studio. And since he didn’t drive, I would run errands for him,” recounts Kerry. “He would often ask for my opinion on his pieces. When I saw this particular bright blue, green and yellow abstract painting, I told him those were my happy colors. After that first one, it became an abstract series and has sold very well.”

Kerry Davis will join the aforementioned Kevin Sipp, a Daytona Beach native and now Atlanta-based African American artist, art scholar and independent curator, for the free Zoom talk on February 28th. Shortly after meeting Sipp, Kerry bought his Travelogue piece for his collection. The two became instant friends and for a time also were neighbors.

“While the Zoom talk will be open-ended, I really want to give some history to African American artists and their work,” says Sipp, who earned his Bachelor of Arts in printmaking in 1991 from the Atlanta College of Art. “At the 1895 Cotton States and International Exposition in Atlanta, federal funding mandated a designated space, which was called the Negro Building, to showcase African American artistic achievement.”

According to Sipp, the civil rights art movement also opened the door for many people to begin collecting art.

“Kerry is a perfect example of being able to collect art without having to be wealthy,” notes Sipp. “His collection is a wonderful showcase of the diversity of African American artists and their art.”