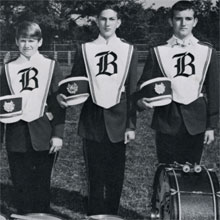 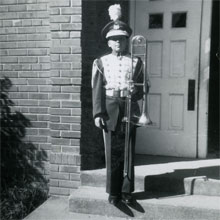 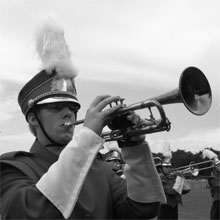 Vanguard High School student Wesley Dudley is no stranger to the honor roll. As a matter of fact, straight A’s have been his standard the past two years. But that standard has not always been the case for him. Wesley struggled academically in elementary and middle school with C’s, D’s, and occasional failing grades. Then there was a change. A new chord struck in Wesley’s academic performance. While there could be many factors playing into Wesley’s academic change and success, he and his mom make one important note — band.

“I always knew Wesley was very bright,” says Wesley’s mom, Sharon Dudley. “He just had not found a way to apply himself well until he started with music.”

Joe Hughes, band director at Vanguard High School, echoes that sentiment as a value for the arts in schools.

“Students are usually trying to find an outlet that gives them passion. Music in many cases is that key that opens up new opportunities for learning by participating in something creative and beautiful.”

“Music was a great way for me to know I could do something well,” Wesley shares. “I don’t know that my grades were better just because of band, but I know that’s where I learned to really listen and concentrate.”

There are also other skills Wesley learned in band that he sees helped academically.

“You have to learn to prioritize your time to be able to practice and get things done. When everyone is warming up individually it sounds pretty bad in that room. But we sound great when we all work together.”

What a great lesson to learn at such a young age!

As we look to the future of our world, our country, and our community, we look to what kind of leaders are being developed now. Since hindsight is 20/20, it seemed beneficial to look at some leaders in our community today and see what role music played in their lives. Some key skills were learned in the band room and on marching fields that these leaders utilize in their everyday work schedule. Here are their band stories:

Paul Clark, the incoming CEO of Munroe Regional Medical Center, readily admits he was not a talented musician. He played trombone through middle school and high school, but what he gained from his band experience in Tallahatchie, Mississippi, was much more than the notes played on his instrument. It was a harmony for success in life.

“The best thing I carried from my band experience was leadership. As field manager, I was responsible for making sure all the equipment and students were accounted for and ready for the performance. That was a lot of responsibility.”

Paul learned that leadership comes by having respect for authority and earning the respect from those you lead.

“My band director, Mr. Gee, led by example and made all of us want to do a good job for him as well as our team. He pushed us to excel and dealt with any discipline issues that would come along in private and helped students learn from mistakes.”

Kathleen Woodring, Vice-President of Business Development for the CLM Workforce Board, said she struggled academically until band camp in tenth grade.

“Our band camps were held at Bemidji State University. It was my first time away from home and I realized I did want to go to college. That’s when I began to excel and my grades turned to straight A’s.”

“He was very strict, but had a way of really motivating us to be better. Two other flute players and I were good friends. We never stayed first chair long because we were constantly challenging each other. He would set the date and time for our challenge and made a big deal out of it. We all three became better musicians.”

Kathleen sees that as a valuable lesson in her career.

“You have to challenge people to excel and want to become better, but you also have to give the training and tools to help them succeed.”

It takes all kinds of people to make big projects work well. Ray Hopkins, Director of Plant Operations for Ocala Regional Medical Center and West Marion Community Hospital, learned early in life that sometimes we don’t show enough respect for people until we walk in their shoes — or carry their bass drum!

Ray was injured early in his high school football career and couldn’t play the game anymore. However, he couldn’t stand not being involved on Friday night’s games, so he joined the percussion section of the band.

In Brookwood, Alabama, football reigns supreme and band members did not always receive the same glory. Ray shares a story of how one coach made a team out of football players and band members.

“The football coach overheard some players making fun of the band. They were saying that band was for wimps. The football coach took his team and worked with the band director. They gave them heavy instruments and had them try to learn to march, stand at attention and play. It was a turning point. From that time on, there was a new respect for what we did and the football team really began to see us as an extension of their team. The same is true for everyday work situations. We all have to respect the role others play. My success depends on others and others depend on me. It’s all about being a team.”

“I started with trumpet, played percussion, saxophone, tenor sax — whatever was needed at the time. We may have been small, but we had a great sound!”

Kevin has used those skills of flexibility in his everyday career with the school system and saw band as an important part of his socialization in high school.

“We had so much fun and were so close. There is not a memory I have of high school that doesn’t have band woven in it somewhere.”

All of these community leaders expressed the need for band programs in schools to help students excel.

“I know budgets and scheduling can be a challenge, but we have to continue these programs in schools to develop well-rounded leaders,” offers Kathleen Woodring. “The arts are vital to success — they’re what make us human.”

Want To Do More?

Consider making a donation of time or money to your local school’s music program. Also, you may want to see our area bands in action at the Florida Bandmasters Association’s performance assessment Saturday, November 6 at 9am at Leesburg High School. For more information, contact Gabe Fielder at (352) 728-3739 or visit www.mpa19.org