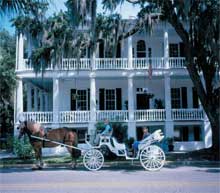 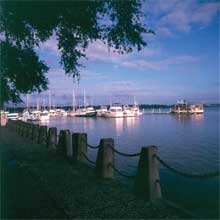 Beaufort is one of the gems on South Carolina’s Treasured Coast. Centrally located in the heart of the state’s Low Country, it is a vacation destination that offers preserved historic buildings, beautiful natural settings, great dining, and all the outdoor and water activities you could imagine. An added bonus is that it’s only a short drive to other southern gems of Charleston to the north and Hilton Head and Savannah to the south.

There is something about the Low Country that appeals to the romantic nature in most of us. Tidal rivers that part a tapestry of marsh grasses painted in greens, ochres, and umbers along with Spanish moss-draped trees conjure tales of adventure, mystery, and romance. Atmospheric movies like The Prince of Tides and The Big Chill were filmed in the area and have heightened these images for me. So, I admit, I was predisposed to like Beaufort.

And I was not disappointed.

If you were to approach Beaufort from the sea by traveling up the Broad and Beaufort Rivers or one of the smaller tidal rivers, you would pass land that once was planted in indigo, rice, and Sea Island cotton, the historical economic foundation of the area. But the history of Beaufort goes back much further than its 18th century plantations to 1514 when it was discovered by the Spanish.

Beaufort’s history shares similarities with most of the coastal south in that it was taken from the Spanish by the British and, in Beaufort’s case, chartered by them in 1711. Also, like much of the coast, pirates frequented the islands. Blackbeard even had a hideout on Fripp Island, one of Beaufort’s barrier islands. The area plantation owners grew wealthy on their crops and built their town homes in Beaufort to escape to for socializing. The Union army occupied Beaufort during the Civil War and took up residence in many of the fine homes.

The slaves that worked the plantations combined their own Creole language with a pidgin English base into a language known as Gullah that is still is use today. After the Civil War, many of the Gullah people remained in relative isolation amongst the Sea Islands, and they retain many of their traditions to this day.

Because there is such a strong sense of history in Beaufort, a good place to start your sightseeing in the city is at the Beaufort Museum on Craven Street. This former fort displays exhibits and artifacts of local history in a self-guided format. With a general feel for the history under your belt, you might then want to go around the corner to the 18th century John Mark Verdier House on Bay Street for a tour of this Federalist-style home and its furnishings.

Before you go off to one of the many area restaurants, be sure to book a “Ghosts of the South Candlelight Walking Tour” for after dinner. You will be met at Waterfront Park by a guide dressed in period costume and carrying a lit lantern. After a brief introduction, the guide will take you on a detailed and fascinating walking tour of the historic district.

During the hour-and-a-half tour, the guide will flesh out much of the history you read about in the museum and puts a face on many of the former owners of the historic homes. With great dramatic skill, he will tell of the ghosts that still haunt some of these homes.

Speaking of ghosts, one of the ghost tour stops is at a cemetery in the historic district. It was somewhat cool and a little foggy on the night I took the tour, so the atmosphere was perfect for spooky stories. The guide explained how it used to be difficult to tell whether someone was actually dead or not, and this was a dilemma because, in the heat, a body would deteriorate rapidly. Bodies, therefore, were not kept around long, and this sometimes led to people being buried alive. To solve the problem, a string was tied to the body’s finger and then run to a bell outside the grave that could be rung if the person in the coffin awakened. The person assigned to listen for the bell was said to ‘work the graveyard shift’ and if he did rescue someone from a grave, that person was ‘saved by the bell.’ But sometimes a breeze would ring the bell, and the coffin would be dug up only to find a dead body. When that happened it was called ‘a dead ringer.’

But, unlike the bodies in the cemetery, history is never dead!

If you are so inclined, you can crowd a multitude of activities into one day by heading out early over the Woods Memorial Bridge to the offshore islands. The larger Dataw, Lady’s, and St. Helena islands are mostly residential and agricultural, but because they are surrounded by waterways, you never know when you will spot a shrimp boat looking like a giant insect hovering above the water on its net wings. Waterfowl are ubiquitous ornaments on this marsh landscape.

Continuing seaward from St. Helena Island, you will cross a causeway to barrier islands Harbor, Hunting, and Fripp. A good way to spend the remainder of your day is in a seat at the beach at Hunting Island State Park. Besides public beach access, the park has a picturesque lighthouse, walking trails, and full camping facilities that usually have to be booked months in advance.

A third day in Beaufort is needed to visit Parris Island and the historic town of Port Royal. Parris Island is the east coast recruit training grounds for the U.S. Marine Corps. The Parris Island Museum is open to visitors and, through its displays, tells the island’s history from the arrival of the French Huguenots in 1562 to the present day.

According to the Historic Port Royal Foundation, the Port is, “the deepest natural harbor on the Atlantic Coast of the U.S.” The town of Port Royal attracted ships carrying phosphate and lumber. When the phosphate industry declined and the shipyard was moved to Charleston, the area was saved by a growing seafood industry. An oyster cannery and the state’s first shrimp docks saved the day for the town of Port Royal.

Today, you can take a self-guided, walking tour of the historic homes in the town, most of them dating back to the late 19th and early 20th centuries. Just be sure to wear comfortable shoes!

Be sure to end your day in Port Royal at the 11th Street Dockside restaurant, which overlooks the shrimp boat docks of Battery Creek. I had boil-and-peel shrimp, and it was the best I’ve ever tasted. It was almost as good as lobster, and that’s saying something coming from a New Englander!

There are many fine, historic places to stay in Beaufort. I was fortunate to stay in two beautiful establishments, each with its own unique atmosphere. I spent the first two nights at The Beaufort Inn, an historic home built in 1897 and converted to an inn in the 1930s.

With 21 luxuriously appointed guestrooms, cottages, and suites, an elegant dining room, a topnotch chef, attentive staff, delicious breakfasts that are included in the price of the room, and afternoon tea served in the paneled bar, The Beaufort Inn is everything one could ask for in luxury accommodations.

“Some people say the Beaufort Inn is the Beaufort experience because of the people who pass through it,” said Adrienne Kaufman, one of the Inn’s staff. Adrienne came to the area as a Marine recruit and never left. Some of those who have visited the inn include novelist Pat Conroy and actress Julia Roberts, who stopped by while she was filming Something to Talk About. (See sidebar on movie connections.)

I spent the third night in Beaufort at the TwoSuns Inn Bed & Breakfast on Bay Street. Owners Patricia and Henri Safran truthfully boast that the TwoSuns has “by far, the best view in Beaufort.” I had a room with a screened porch from which to gaze out upon the lovely river and the marina. You may also enjoy the view from the wide front porch while you partake of your complementary breakfast or afternoon wines and sherry.

Henri is the resident French chef but, unfortunately, I did not have time to enjoy a meal at the TwoSuns. I did, however, learn that the innkeepers led very interesting former lives. Patricia was an actress and Henri the director who gave Nicole Kidman her first film role. When you stay at the TwoSuns, perhaps the couple will tell you some tales from the entertainment world.

Beaufort is truly one of the gems of the Low Country. It offers historic homes, limitless outdoor activities in beautiful surroundings, wonderful places to stay in all price ranges, and fantastic seafood. And, because it is only a five hour drive from Ocala, it is a gem that may be admired often.

When you visit Beaufort, you may literally bump into someone with a connection to one of the above films. I was taking a photo of a shrimp boat tied up outside a fish store on St. Helena Island when a woman came up and asked if I had noticed the name of the boat. It was the Tiderunner, the boat in The Prince of Tides. The woman, Ganelle Polk-Heck, from Lady Lake, said the boat belonged to her daughter and son-in-law, Sarah and Paul Emmett. I also met the marketing director of the upscale restaurant Bistro 205, Catherine Rondema, who happens to live in the guesthouse at Tidalholm, the house from The Great Santini and The Big Chill.