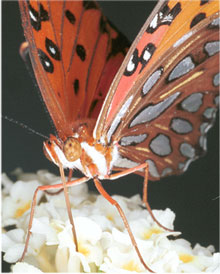 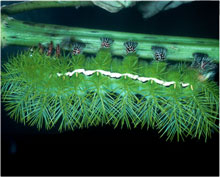 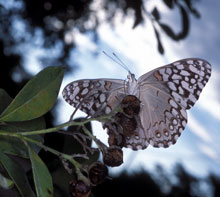 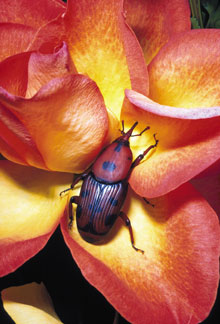 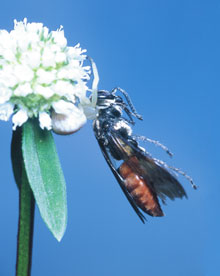 As a young child, Andrei began collecting butterflies. By the time he was 12 or 13, he could name all of the moths and butterflies in the Soviet Union, where he grew up. From this point on, Andrei’s path in life was, undeniably, pre-destined.

“I’ve always had an interest in insects,” he says. “I think it’s an interest many kids have, especially boys. But often, they’re discouraged from playing with bugs — I wasn’t.”

Andrei’s career in research entomology is mostly concerned with classifications, descriptions and groupings of new species. He has also worked with the USDA in regards to biological control.

“An example of this would be using parasitic wasps to control pests instead of pesticides that could potentially harm the ecosystem. This is the type of research I do.”

Today, Andrei is a research entomologist at the University of Florida, where he also received his Masters degree and subsequent PhD.

Photographing insects isn’t something Andrei set out to do. Initially, he began taking photos to accompany articles he would write for scientific journals. After a short time, he began to look at his subjects with an artistic eye.

“I started taking pictures for the aesthetic value,” Andrei says. “Butterflies were my first interest when it comes to photography, but I have grown and progressed into shooting other insects. Fire ants, roaches, beetles — I’ve shot them all. I particularly like my work to show a process, like feeding, building a nest, things like that. I go for the photos that tell a story.”

While some may flinch at Andrei’s unusual interest, it doesn’t phase him.

“People’s tastes vary,” he says. “Everyone enjoys and is bothered by different things.”

One reason Andrei feels compelled to photograph insects is to make the unfamiliar, familiar.

“There are four million species of insects in the world and each one has a unique lifestyle and relationship with the environment,” he says. “Unfortunately, most insects are under appreciated due to their small size, which often takes away from their fantastic forms. I try to bring the insects closer to the viewer and get the public away from the widespread notion that insects are nothing but pests.”

Andrei says most people have no concept of what insects actually look like because they avoid them. The photos Andrei takes provide viewers with an up-close look at some exotic creatures.

“People tend to be attracted to my pictures because of their peculiar qualities. I bring the detail of the insect to the viewer who may be ignorant about bugs.”

While most people (including myself) try to keep a safe distance between themselves and insects, Andrei is just the opposite and will go out of his way to get as close to his subjects as possible. Andrei creates amazingly composed photos using what he calls “just a normal camera.”

“I use a Nikon camera when I’m shooting,” he says. “I often use a macro lens that requires me to get right next to the insects. This means I have to position myself and move very slowly when I’m waiting for a shot. If I saw a butterfly feeding several times on a certain flower, I’ll stake out that flower and wait for the butterfly to return.”

Andrei’s career has allowed him to travel the world. Only in his early 30s, he has already visited more than 30 countries, including Ghana, Africa, Asia, Madagascar and many others. He says he especially enjoys the scenery and the people in Kenya and Nepal. Even with his extensive travels, Andrei is quick to say that he doesn’t have to venture far from home to capture exciting moments.

“Every time I walk the streets of Gainesville I see three or four potential pictures,” Andrei says. “My pictures are always a combination of several factors, including, shapes, backgrounds and colors. What makes some of the best pictures are the unique angles or beautiful settings in which you discover your subject.”

Over the years, Andrei’s stories and photos have been published in several scientific journals and magazines. Despite his obvious success, there are still several elusive images Andrei is hoping to capture on film.

“There are plenty of events I want to photograph,” Andrei explains. “A Sphinx Moth hovering over a flower and dragonflies mating in the air are just two of them. These occurrences are difficult to capture and require a reasonable amount of time and patience.”

Currently, Andrei is spending a lot of time helping with the decision-making process involving one the University of Florida’s newest facilities — McGuire Hall. The facility will house a tropical butterfly house where visitors can walk among thousands of butterflies, in addition to research centers.

“We’re hoping the facility will open around summer of 2004,” Andrei says. “It’s going to be very exciting to bring some of these exotic species to the general public. McGuire Hall will hold the world’s second largest collection of butterflies and moths.”

In the meantime, Andrei will continue to provide the world with gorgeous photographic images.

“Only what can be clearly seen can be appreciated,” he says. “Only what we appreciate, do we protect. I hope that in some small way, my photography contributes to the awareness of the beauty and diversity of insects.”

Karin Fabry is the assistant editor of Ocala Style magazine. She received her bachelor’s degree from the University of Florida. Her interests include music, movies, art, animals and spending time with family and friends. She can be reached at karin@ocalastyle.com