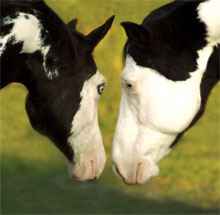 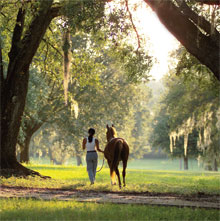 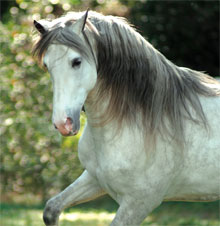 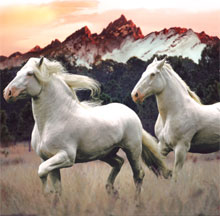 Mark J. Barrett admittedly doesn’t say much. But if a picture is indeed “worth a thousand words,” this photographer and videographer weaves quite a story. This soft-spoken man considers artistic talent a gift that must be developed.

It’s safe to say that Mark Barrett has wasted no time in developing his gift.

A Florida native born in Hollywood and raised in Ft. Lauderdale, Mark has called Ocala home for more than two decades. The concentrated horse population in Marion County allowed Mark to find his niche in equine photography.

“I started photographing horses when I came to Ocala,” says Mark. “I’m not a horse expert, but I know what looks good. I can’t look at a horse’s conformation and pick that apart, but it’s up to the photographer to make the horse look perfect.”

Over the years, Mark has become an expert at making horses “look perfect.” His images appear routinely in calendars and, in 2006, eight different calendars will feature his photos, some exclusively. Storyline, the publishing business Mark owns with his wife and partner, Jackie, will publish two of these calendars.

One of the most exciting projects Mark recently completed is If I Had a Horse: How Different Life Would Be, a hardcover book featuring more than 100 of his licensed images. Author Melissa Sovey-Nelson’s poetic text melds seamlessly with the striking photos, which display horses in a variety of natural settings and moods. The book, comprised of “reflections on how the horse experience migrates into the way we think of ourselves and of others,” could be categorized as both artistic and inspirational. It is clearly one that horse lovers will return to again and again.

Mark’s images in If I Had a Horse are both peaceful and powerful. Although his photos have appeared in many books over the years, this is the first to contain his work exclusively. Both Mark and Jackie are enthusiastic about the book, released this spring by Willow Creek Press.

“The layout really shows respect for his images,” Jackie notes. “They’re not just ‘filler’ or something to illustrate a point being made in the text. The powerful text combined with the sensitivity of Mark’s images takes this book out of the horse market and into the mass market. It’s really a woman’s ‘empowerment’ book; Mark sees in the horse something women really relate to and he can capture it.”

The book’s first printing has already sold extremely well and the Christmas buying season is just around the corner. This is good news for both the Barretts and Willow Creek Press.

Packaged with the book is the DVD, The Beauty of Horses, which Mark filmed, wrote, produced, and released earlier this year. This 22-minute production features stirring video footage of horses set to music. Although there are a few scenes with riders, the majority of horses featured are running loose in picturesque settings. It is a horse lover’s delight made to showcase the natural beauty and magnificence of the horse, just as the title states. Mark entered The Beauty of Horses in the 2004 Annual Telly Awards, an international competition with over 10,000 entries, and it won an award in the film/video category.

Since he sold his first photo in 1980, a shot of a blue heron sitting on a fence post in the Everglades, the photography business has changed dramatically.

“I started out with a secondhand 35mm camera, and I’m 100% digital now,” says Mark, whose first studio/office was a small converted garage/bedroom in his home. “My business is completely different than what it was, even just a few years ago. I used to be a commercial, ‘for-hire’ photographer, but I do very few of those shoots now. That has been replaced by shooting the images I want to shoot for art’s sake, images I like that I think will sell. Selling stock photos has always been a great supplement to my income and in the last three years, it’s become my income.”

His video and filming company, In Motion Productions, still makes up about 50 percent of his work. In that arena, word of mouth has brought in much of his business. But when it comes to stock photography, it’s a wide market and Mark has become skilled at self-promotion. He created an equine stock image catalog on CD, which he updates at least twice a year. Over 1,600 images are contained on the CD, which he sends out to potential markets worldwide. When professional photo buyers want any of these images, they simply contact him and negotiate the price, depending on how the photo will be used. Buyers then use those images in advertising, catalogs, calendars, and books.

One of the main reasons the Barretts launched Storyline Publishing in 1997 was to put out calendars featuring Mark’s photography.

“His images have appeared in calendars for years, but he was never really happy with the images they chose,” says Jackie. “Storyline is a way to promote everything Mark does and turn it into a salable product. The key is finding a niche; you just can’t compete on a general level.”

Mark is forthright about the fact that meeting Jackie has been the most rewarding part of his career.

“That lead to everything else and to where we are now,” he says with a smile. “She’s the brains behind the outfit.”

At this, Jackie blushes and deftly redirects the conversation back to Mark’s talent.

“You hear about people having an eye for photography,” she remarks. “You either have it or you don’t, but you have to culture it. With Storyline,” she adds, “we’re trying to concentrate on what we do best, which is using Mark’s images to design and create products that will sell.”

For Mark, art is simply an appreciation of beauty. He has followed a common sense approach to business and only buys equipment when it will benefit his work.

“I didn’t start out buying the most expensive equipment,” he says. “Tools can limit you, but you shouldn’t invest in more tools unless you’re limited by what you have.”

Although he is always searching for beautiful horses and inspiring settings, he has no qualms about enhancing photos using the computer, and with practice, has become quite skilled at retouching.

“You can always improve an image,” Mark explains. “I’m trying to make people feel something when they see the image, so I always take out anything that can distract from the image and interfere with the feeling of freedom.”

Spend even a short amount of time with Mark and Jackie and it’s obvious this couple is devoted to each other, as well as to their business. Although busy with the present, they are excited about plans for the future. While the release of If I Had a Horse was a major goal, there are numerous others on the horizon. They still want to publish an art book of Mark’s equine images and plans are also in the works to produce more videos.

“We have long-range plans of having a television show focusing on the passion of life with horses,” adds Jackie. “It would focus on horses and horse owners.”

With his busy schedule, does Mark ever think of retirement?

“I’d have to say, I retired 10 years ago to some extent, because now much of my work is on my own terms,” he explains. “I’ve stopped taking jobs I don’t want to do.”

“If you can do something you love and make it pay,” Jackie reflects, “would you ever want to stop?”

Mark smiles and finishes that train of thought.

“To me, wealth is not based on money. It’s based on having someone you love who loves you, a comfortable place to live, health, work you love, and your children being happy and healthy. If someone asked if me if I was rich, I’d have to say yes.”

For more information about Mark Barrett, visit markjbarrett.com. If I Had a Horse can be purchased in any major bookstore and is also available on the Barretts’ website, storyline.net, which links to the Willow Creek Press website. The Beauty of Horses, available in DVD and VHS, can also be ordered via the Storyline website, where screen savers and other products can also be found. The Barretts plan to have an exhibit at the Florida Equestrian Celebration, which will be held at the new Jacksonville Equestrian Center on November 20-21. Call 236-2282 for more information.