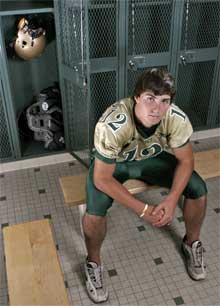 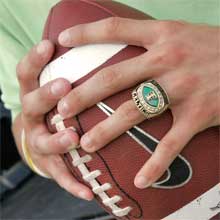 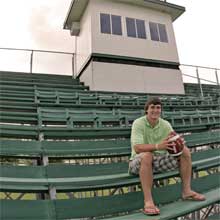 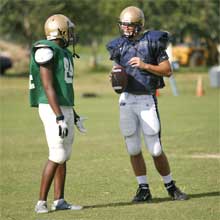 You could say Trinity Catholic Head Football Coach Kerwin Bell is Ocala’s current resident expert on the quarterback position. Like Will Ferrell and Chris Rock are to comedy or Emeril Lagasse is to cooking, Bell knows QBs.

If you attended a Trinity Catholic game during last year’s exciting ride to the Class 2B state championship, you couldn’t help but notice how prolific the Celtics’ offense was, particularly the quarterback play of John Brantley.

The Celtics high-octane offense is not your run-of-the-mill high school offense of run left, run right, with an occasional pass mixed in. With a talented signal caller in John Brantley under center, Kerwin’s been able to apply the expertise he’s soaked up over the years — starring at Florida in the 1980s and through stops in the NFL to working with or playing against the likes of Dan Marino, John Elway, and Joe Montana.

According to Kerwin, John possesses the essential ingredients necessary to build the prototype quarterback.

“There are three things you need to be a great one,” Kerwin explains. “Number one is you’ve got to have a great arm to be able to make any throw on the field and also have a great release. Number two is intangibles, which mean simply having a feel for the game that is a natural God-given talent. Number three, and [the] most missed aspect is mobility. If you have speed along with the other two you have a chance to be a real special player. John’s been in the same system for three years and college coaches tell me he’s ready to play at the next level already.”

Last season, John arrived as a full-fledged force at quarterback, leading his team to a spotless 14-0 record and securing Marion County’s first state football championship in a generation. John cemented himself in area football lore by amassing eye-popping numbers, tossing for 2,835 yards and a gaudy touchdown-to-inception ratio of 41 TDs and just 5 interceptions.

The buzz surrounding John Brantley is something this area hasn’t witnessed since current Miami Dolphins QB Daunte Culpepper led Vanguard to a state championship game in 1994. During that magical senior season, Daunte tossed for 3,074 yards and 31 TDs, while adding another 600 yards on the ground. In his varsity career, Daunte threw for 6,107 yards and 57 TDs in three seasons at Vanguard. By comparison, John has thrown for 4,036 yards and 58 TDs in two seasons. By the end of this season, we’ll know if John’s numbers ice his spot in Marion County’s record books as Ocala’s best ever.

While a lot of Brantley’s success is obviously attributable to his natural talents, it must be mentioned that he comes from a strong lineage of football talent. John’s father, John Sr., played on state title teams at Forest in the 1970s and Scott Brantley, John Sr.’s brother, is widely regarded as one of Ocala’s finest football players after a dominant high school career and successful NFL career with the Tampa Bay Buccaneers.

“He understands what it’s about to play at the next level,” John Sr. says. “We’ve worked on the little things — footwork and looking off the safety — since the fifth grade. When you start early, those things become habits. He’s had a huge advantage.”

Not only has John Jr. been blessed with a football background, but his supporting cast is ultra-talented and back for another year.

John Brantley’s top target, wide receiver Dion Lecorn is another nationally rated player with an impressive mix of size and speed. Tight end Lex Peek and running back Rudell Small are weapons that keep defenses honest and would be headline attractions on a lot of teams. Offensive linemen Levan Sims and Byron Harvey protect Brantley adeptly and lead the way up front. Safety Armando Allen is an impact player that wreaks havoc on opposing offenses. In all, 16 players on Trinity’s team garnered all-state honors last year and Lecorn, Small, Sims, and Allen were first-team selections.

Their ultimate goal came to fruition last season, as John and his teammates blitzed through the regular season undefeated. The Celtics were so prolific on offense that their dominant defense, one that didn’t allow its first points until week eight and pitched nine shutouts in all, was sometimes overlooked.

John saved his best play for the playoffs, though. He racked up 310 yards and 3 TDs against a powerhouse Union County squad that boasted five Division-I bound seniors on its defense. Time after time, John lit up the helpless Tigers’ defense by displaying the patience and deft touch to loft passes over the dropping linebackers but in front of defensive backs. He also made some exquisite deep sideline throws into tight coverage that could only fit in over the outside shoulder of his receiver.

More recently, John’s physical gifts were put to the test at the Elite 11 quarterbacks camp in southern California from July 24-27. Twelve of the country’s finest high school signal-callers participated in the invitation-only event. Some notable Elite 11 alumni speak to the level of talent that attends this prestigious camp. Names of current NFL QBs like Super Bowl MVP Ben Roethlisberger, Carson Palmer, and Drew Brees, in addition to rookies Vince Young and Matt Leinhart.

During the camp, the players are put through two hours of drills per day, plus chalk talk sessions with coaches to help them master the intricacies of football’s most difficult position. Not surprisingly, John brought home some impressive hardware for his trophy case. Of the camp’s 11 awards, John garnered four, including the camp’s Most Valuable Player, plus Best Leader, Most Likely to Succeed in College, and Most Likely to Win a National Title.

“It was everything I expected and more,” John says. “I learned a bunch of tips, mostly from the chalk talks; they also broke us down on film and helped us recognize coverages better.”

With national recognition and elite awards in tow, one would think John Brantley might have adopted a BMOC (Big Man on Campus) mentality, just looking forward to a laid-back senior season. Those naysayers couldn’t be more wrong.

About the only knock to date on John has been his lithe frame that isn’t conducive to taking hits at the next level. This off-season, John has labored in the weight room, transforming himself from a skinny 175 pounds to a more muscular 195 pounds.

John Sr. credits his son’s off-season regimen of working out four days a week to that gain.

“We emphasized strengthening the lower body, decided he not play baseball, and use that time to get stronger. He’s gotten faster, too; he was clocked at a sub-4.6/ 40 on grass in Austin.”

Don’t expect John or his teammates at Trinity to rest on one championship either.

“We know we have a target on our backs. We can’t have the mentality of just showing up,” John says. “We have to play every down.”

The elder Brantley, who coaches the running backs at Trinity, thinks the method in which the Celtics won state will keep them hungry.

“They didn’t leave as world-beaters; the game almost got away from us. It gave our kids some motivation to pay attention to the little things to get better. We’ve had a great off-season.”

Kerwin Bell echoed the sentiments that this group of seniors still has a lot of unfinished business.

“The championship belongs to last year’s senior class. We had some great leaders in that group. This senior class has no excuse; this is their time. It’s a special class of such a high number of quality athletes.”

With 10 starters back on Trinity’s high-octane offense, plus a steady diet of motivation from the coaching staff and a steely determination to improve, expect John Brantley and his teammates to provide another excellent adventure for their fans in the Ocala community.

And for John, it may be one for the record books.