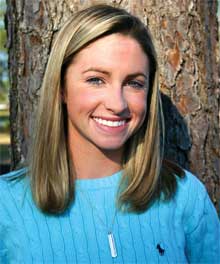 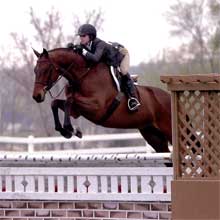 If Megan Massaro isn’t studying, there’s usually only one other place she can be found –on a horse.

Although only 17, Megan has been riding up and down the east coast since age 11. She won her first class showing a pony named Zoey owned by Oliver and Rachel Kennedy of Maryland, and the thrill of competition has never faded.

Although born in Toronto, Megan has lived in Marion County since age two, so she practically considers herself a Florida native. “I hate the cold,” she grins, blue eyes sparkling.

“Since I could walk, my Mom had me on my first pony,” says Megan.

But she doesn’t plan to make riding a career, despite her success over the past years.

“I want to study medicine,” says Megan. “I want to be a nurse practitioner, a nurse anesthetist, or a physicians’ assistant.”

Ironically, her dedication to riding will enable her to follow these dreams, as Megan received a riding scholarship to the University of South Carolina, her first pick thanks to their nursing program.

“They follow NCAA rules and recruit riders just like in any other sport,” she explains. “Representatives from the school watched me compete before offering the scholarship.”

Megan will be competing on the University of South Carolina riding team and showing at the collegiate level. For this opportunity, she credits her trainers Don Stewart and Bibby Farmer-Hill of Don Stewart Stables in Ocala, where she has been riding since she was just 11.

“Don and Bibby have basically helped me attend college,” says Megan with obvious gratitude. “If it wasn’t for them, I couldn’t afford to go to this school.”

As she has for the past seven years, Megan will be among the riders representing the Don Stewart Stables at HITS (Horse Shows in the Sun) this winter. She will ride as many as seven different horses per weekend in the various divisions, including Junior Hunter, Equitation, and the various Pony divisions.

Although Megan doesn’t own her own horse presently, she never has a shortage of horses to show.

“Owners will send their horses to the trainer and leave it up to them to find the right person, whether a junior or a pro, to ride that horse in competition,” she notes. “Even though you might get attached and have a ‘favorite’ horse, you always try to do your best on every horse you ride.”

Doing her best has earned Megan no shortage of championship rides. In 2005 at HITS, she earned eight championships, eight reserve championships, and was Circuit Grand Champion in three different pony divisions. This was accomplished riding nine different mounts, one of which is Macy Grey, a pony which Megan showed to Horse of the Year accolades in her division. As the pony’s only rider in competition last year, Megan traveled to Cincinnati to accept the Horse of the Year ribbon.

Unlike some of the youth riders who show at HITS, Megan won’t be missing school to compete.

“Mom is not into me missing school,” she admits with a laugh. “I have to go to school, so I’ll be showing Friday afternoons and all day long on weekends.”

Once school is out for the summer, Megan takes to the road with Don Stewart Stables; then she’ll move to South Carolina to start college in mid-August.

“I’m a competitive person, but not to the point that that’s all it is, and not all my friends are horse people,” she adds. “I have a huge group of friends here in Marion County, even though I’m on the road a lot. I’m in a really cool situation; I have the best of both worlds.”

During an average week, Megan puts in as much as 30 hours riding. She loves the satisfaction of winning, but admits that sometimes the pressure gets to her.

“It’s high pressure when an owner is paying a trainer to have the horse shown so they can sell it,” she says. “I’m a perfectionist, so I’m harder on myself than anyone.”

“Seldom do you find someone Megan’s age who is so appreciative,” remarks trainer Don Stewart. “She has a good work ethic and always does her share and more. She’s responsible, pleasant, and is well liked by her peers. It’s nice to have a winner that everyone else likes, too.”

Megan is one of approximately 7,000 horsemen and women who will be found at the HITS Ocala Winter Circuit over nearly eight weeks of competition at the Post Time Farm show grounds. The annual event ends this year on March 12.

Riders from across the United States, Canada, Mexico, and Europe travel to Ocala to compete. With 10 show rings on the grounds and more than 250 classes scheduled per week, there is always a flurry of activity. Spectators will find a wide array of classes, ranging from elementary school age riders on handsome ponies to top international riders competing in the challenging Grand Prix show jumping classes held each Sunday at 1pm. Over the course of nearly eight weeks, 10,000 spectators will attend to watch a total of some 3,500 horses competing for over $1 million in prize money.

Since its first horse show circuit in Gainesville in 1982, HITS has grown dramatically and now produces hunter/jumper shows in Florida, Arizona, California, New York, and Virginia.

“2002 was the first year HITS was held at the Post Time facility, which was actually purchased specifically for this purpose,” explains Kristen Vale, HITS horseshow office manager.

The Post Time facility covers 300 acres and has 26 permanent barns. Horses are generally stabled at the farm as early as November and some stay through April, although the heaviest concentration of horses is found during HITS competition.

“At any given time,” notes Vale, “there will be close to 2,000 horses standing on the grounds.”

Since HITS takes place during the school year, there is even an on-site school so the younger riders don’t fall behind in their studies.

“We’ve had an on-site school in Ocala for years, Monday through Thursday from about 9am to 1pm,” says Vale. “They are concentrated sessions and we have teachers in all subjects and all grade levels. We can provide pretty much whatever they need — even labs, AP courses, and foreign languages — and students pay tuition to attend. It’s a program that works very well.”

The HITS circuit makes its annual pilgrimage to Ocala each winter and has “a significant multi-month impact on our community,” says Jaye Baillie, president of the Ocala/Marion County Chamber of Commerce. “HITS certainly adds to the equine industry contribution figures recently released by the American Horse Council. The total economic impact to Florida is valued at $5.1 billion.”

HITS alone is responsible for an economic impact of over $50 million on Ocala/Marion County.

“Ocala/Marion County is the Horse Capital of the World, with nearly every breed of horse represented here,” adds Baillie. “I think it’s important that our community recognize the value of our open spaces and horse farms because they are a huge economic driver.”

What: Hunter, jumper and equitation classes. Food and equestrian-related shopping on the grounds.
When: Through March 12, from about 8am-4pm.
Where: HITS Post Time Farm, 13710 U.S. Hwy 27; Ocala, 352-620-2275, HitsShows.com
Getting There: Drive north on US Hwy 27, 12 miles from I-75. Show grounds on the left.
Cost: No admission except on Sunday. $5 per adult. Children under 12 admitted free. Admission on Sunday benefits local charities. Free parking.

* All shows start at 1pm, unless otherwise noted.