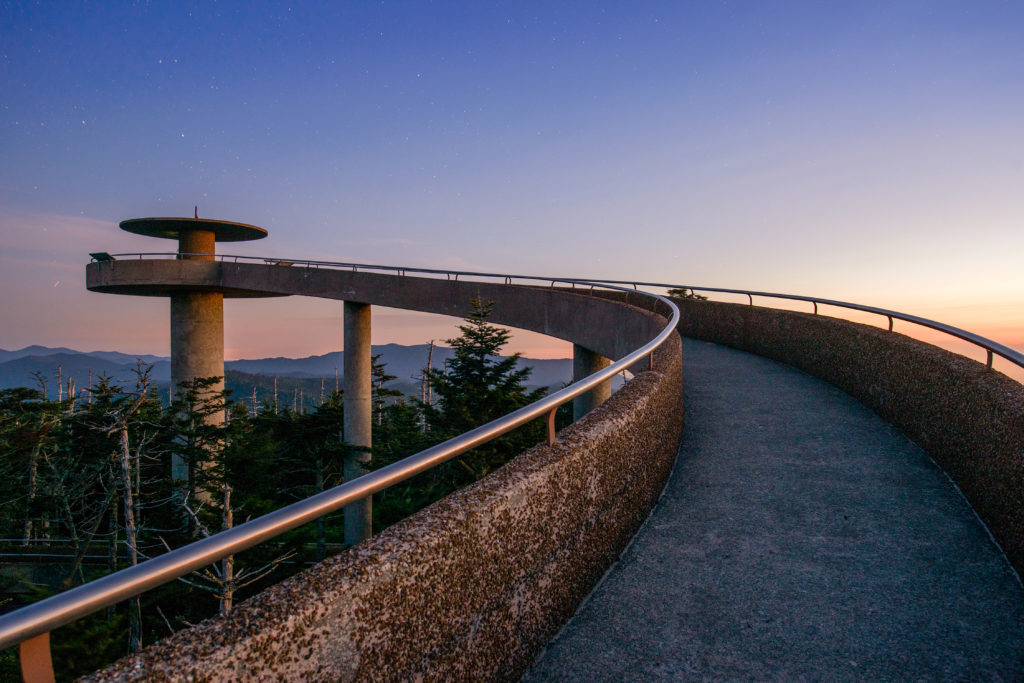 “Growing up, most of our family vacations were camping trips in the Smokies and the Appalachian Mountains,” says Moseley, 64, the STEM coordinator at The Cornerstone School since 2000. “I think I was maybe 14 when Clingmans Dome caught my attention, and that’s how I first learned of the Appalachian Trail. I always thought that one day I’d hike the whole thing.”

It would be a goal deferred four decades by life events.

“I went to college, got married, had kids and a corporate career,” says Moseley. “But as my kids started their own lives, the Appalachian Trail was back on my mind. My parents were public school teachers, and that’s why we had the whole summer to take those camping trips. For many reasons, I started thinking about teaching. Having summers off was one of those reasons.”

And soon Moseley did indeed get a teaching opportunity but not anywhere near the Appalachian Trail. Instead, he went to France for nine months in late 1999 to teach English to French students.

“I was teaching in the Great Pyrenees Mountains area, so I took the kids on adventure camps,” says Moseley. “That experience really made me want to pursue a teaching position. When I got back, I accepted a position with The Cornerstone School.”

But it wasn’t until spring break 2009 that Moseley’s Appalachian Trail dream came to fruition. Moseley, his friend, Jim Stripling, and his son, Connor, were dropped off at Amicalola Falls State Park in Dawsonville, Georgia. There they took the 8.8-mile approach trail to Springer Mountain, where the actual A.T. starts. To be clear here, those 8.8 miles don’t even count as actual Appalachian Trail mileage.

“We were going to do a four-day, three-night trip,” says Moseley. “I borrowed equipment. I packed too much. It rained. When we got to the shelter that night, we were soaked. I pitched my little borrowed tent, and during the night, it flooded. In the morning, Jim and Connor went home. I decided to go on.”

In three days, Moseley hiked 15.6 miles to Gooch Gap, Georgia. He had finally started his A.T. adventure, and he was hooked. Moseley was back that June, dropped off at Gooch Gap by his wife, Jessie.

Moseley hiked from Gooch Gap to Winding Star Gap, Georgia, a total of 94 miles. He came back during Thanksgiving break and tacked on another 10 miles from Winding Star Gap to Wayah Bald, North Carolina. And just like that, he had become an A.T. section hiker.

“There are the thru-hikers, who do the whole A.T. at once, which can take generally about seven months. That wasn’t going to work for me,” says Moseley. “But being a section hiker would since I could hike during summer break. For eight summers now, June has been my A.T. hiking time. I’m usually out on the trail for 1 1/2 to two weeks and cover 15-20 miles a day. The most I’ve hiked in a section to date has been 290 miles and the least 124 miles.”

Ask anyone why they hike the A.T. and you will get many different answers. But the motivation would seem to be simply because it’s there.

“I’m a very purposeful hiker,” says Moseley. “Hiking the A.T. is a goal that I want to achieve.”

And there’s no doubt that it takes purpose to traverse the A.T.  The 2,190-mile journey takes hikers through 14 states, six national parks and eight national forests. The trail begins at 3,280-foot Springer Mountain, Georgia, and ends at 5,267-foot Mount Katahdin, Maine. All told, there are 464,500 feet of elevation gains/losses. There are forests to go through; hills and mountains to ascend and descend; creeks, streams and rivers to cross. Weather can change from hot to cold, from sunshine to rain, and back again in an hour. And, while there are no lions and tigers, oh my, there are black bears. Other wildlife include rattlesnakes, deer, turkey, boar and even wild horses.

One of the first rites of passage for an A.T. hiker is to acquire a trail name. Most hikers are given theirs by other hikers that they travel with, but Moseley came to the A.T. with one.

“I coach our school’s robotics team, and our first team in 2006 was called the Spice Weasels,” says Moseley. “My students decided that Spice Weasel would be my trail name. I’ve been joined for short durations by my students, family, friends, other teachers and even our school principal. They all come to get a taste of the A.T.”

Moseley, on the other hand, is there for the full course. And preparing physically each year to return to the A.T. is not easy when you live in Florida, known for its beaches, not mountains.

“Typically in March, I start doing some hiking in the Greenway. I’ve gone up and down the stairs of the nine-story Lakeshore Towers in Gainesville,” says Moseley. “But really you get fit for the A.T. by hiking the A.T.”

Over the years, Moseley has adjusted his equipment, jettisoning and transitioning.

“I started with the typical old-style leather hiking boot. But they’re heavy, especially when wet, and hard to dry out. And your feet stay wet a lot when you’re on the trail,” says Moseley. “Two years in, I switched to the Keen Arroyo II, which looks like a heavy-duty sandal. And then for my camp shoe or backup shoes, I use Crocs.”

“There are plenty of trail towns to restock food, wash your clothes and spend a night in a cheap hotel,” says Moseley, who hikes with trekking poles. “It doesn’t take long for me to start craving trail town restaurant food.”

No matter how much you eat, Moseley points out that you will go into calorie deficit. He says that “most hikers lose five to seven pounds a week.”

There are basic shelters, three-sided structures with front openings, every five to 10 miles along the trail. The best ones are of log construction. The shelters can usually accommodate six to 10 people. Hikers use the shelters to sleep at night, although Moseley notes that most hikers use tents. After not sleeping well in shelters or tents, Moseley became a camping hammock man.

Camping hammocks are not your typical backyard hammocks. They come with mosquito netting and a rain fly. Once strung up, they resemble a giant cocoon.

Moseley’s wildlife sightings have included an estimated 100 deer, rattlesnakes, a porcupine and a wild boar named Stinky. The latter lives near the shelter at Neals Gap, Georgia, and is considered a part of the A.T.

“I’ve seen probably 12 to 14 black bears, mostly in the Smoky and Shenandoah national parks.  I’ve never felt threatened by a bear,” says Moseley. “One did follow me one night into a campground. When I got close to the shelter, I loudly let everyone know that a bear was behind me. Everyone made a lot of noise, and the bear ran off.” 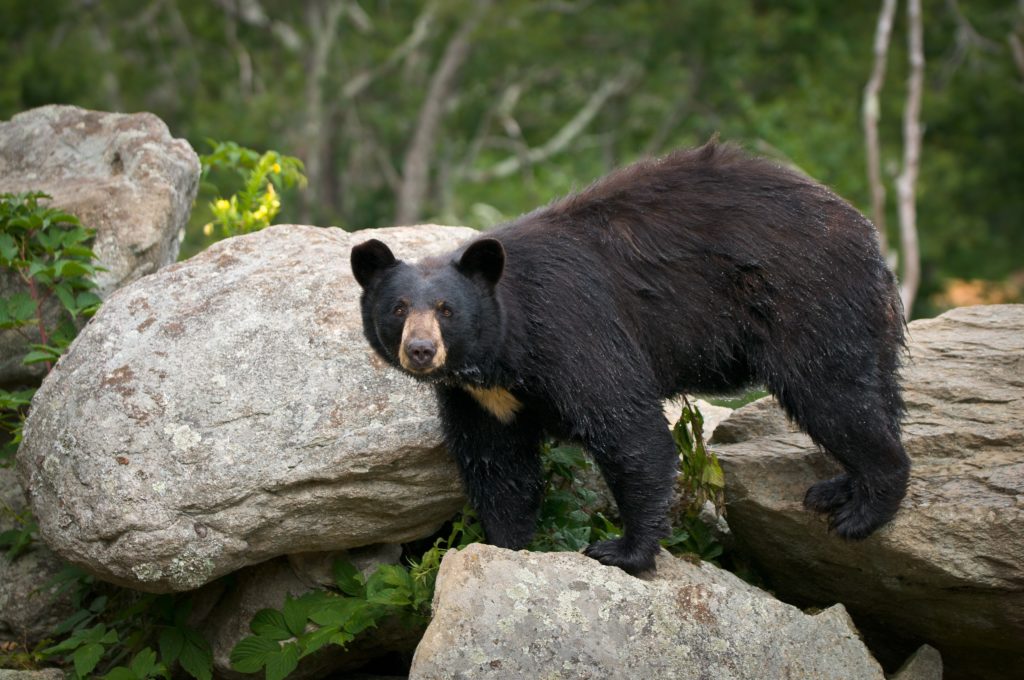 According to Appalachian Trail Conservancy, the A.T. gets 3 million visitors annually.

“Sometimes you see a lot of people and others times not so much until you get to the shelters. I once went 48 hours without seeing anyone,” says Moseley. “You meet people from all over the world, from all walks of life. I’ve hiked three summers with Gary (G-Man) Hollers, who’s from Norfolk, Virginia. We met on the trail.”

“People just pop up on the trail and do acts of serendipitous favors for the hikers,” says Moseley. “One of the most well known is The Omelet Man. He’ll park his pickup truck somewhere on the trail in New Hampshire and cook six-egg omelets for the hikers.”

Vistas rank as Moseley’s favorite parts of the trail.

“A lot of the A.T. is green tunnels through the forests. So it’s great when you come out and have a vista to look out on. Tennessee and New Hampshire have the best vistas,” he says. “Virginia is the easiest hiking because it’s mostly flat. Pennsylvania is the rockiest, and New Hampshire is the toughest because it has so many elevation changes.”

This June, Moseley will chip away at the 550 miles he has left to cover on the A.T. There’s a 207-mile gap in New York between Bear Mountain and Bennington. And there’s the 345-mile trek from Crawford Notch, New Hampshire, to Katahdin, Maine.

“The A.T. has been a great challenge and learning experience,” says Moseley. “The biggest thing it teaches you is that you don’t need a lot to live a good life.”