It’s been 65 years since these six veterans served in the 8th U.S. Army Air Force in Europe, but their eyes still sparkle when they reminisce about the magnificent Flying Fortress, a plane that turned the tide of the war.

The B-17 Flying Fortress achieved legendary status during World War II because of the abuse the aircraft could take from enemy fire and still get its 10-man crews home safely. Fantasy of Flight, an aviation-themed attraction near Polk City, recently invited these WWII heroes from Lake and Sumter counties to share their memories from their combat experiences.

In exclusive interviews with Lake & Sumter Style, each of them talked about what they remembered most about their most dangerous missions and why they are proud to be called the “Fearless Men of the B-17.”

Although they were all stationed in England during the latter part of WWII and were even on some of the same missions, these courageous men did not know each other until last year. The brotherhood they shared with their B-17 crews as young men has now extended into a unique camaraderie among these very special octogenarians. 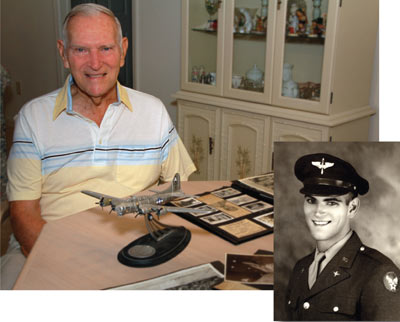 “The B-17 Had Distinctive Sounds”

The sights and sounds of the war are the things that Paul Roberts still vividly remembers.

“When we were in the air, as far as we could see, there were groups of B-17s,” recalls Roberts. “We had to take off in waves and fly in tight formations.”

On one occasion he landed and found 50 holes in his airplane. He said the flak had sounded like pebbles being popped against aluminum siding.

“The B-17 engines also had distinctive sounds,” he says. “Even when you were on the ground, you could hear the B-17s returning to base.”

Roberts was a student at Cornell College in Iowa when he was called to active duty in 1943. He received his pilot’s wings in 1944 and headed to England in January 1945 for the last five months of the war.

“I didn’t fly many missions,” he recalls, “but the ones that I did… well, they were pretty bad.”

Unfortunately, on only his second mission, another B-17 just off his right wing was shot down amid heavy flak. Miraculously, Roberts and his entire crew returned home safely after the war.

“We all respected each other and had to learn each other’s jobs,” he remembers. “We were a brotherhood and that’s what got us through.” 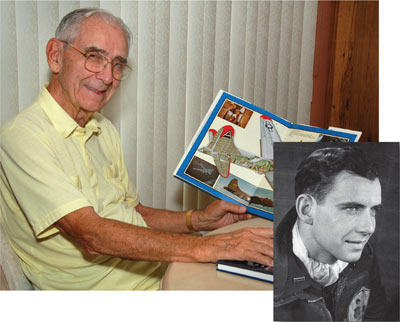 “I Don’t Remember Being Terrified”

Richard “Rick” Morris was destined to become a pilot. He still has a photo of himself posing beside a DeHavilland biplane when he was not quite two years old.

In 1942, Morris joined the military at age 20 and went immediately into flight training.

“If pilots were good at acrobatics, they usually were assigned to fighter planes,” Morris says. “If you were a steady pilot, you were usually assigned to a B-17 or a B-24.”

Morris says the earliest years in the war in Europe were the costliest for Allied bombers, and that the 8th Army Air Force merely “closed the deal.”

“The first third of the war was a learning process for the Air Force,” he says. “The B-17 pilots profited from lessons learned by those who went before us.”

He also speaks fondly about the brotherhood of B-17 crews who were assigned to be together throughout the war. Being a part of the team helped strengthen the men’s courage in the face of war.

“I don’t remember ever being terrified,” Morris says. “Flying was where I wanted to be.”

After a 35-year career in aerospace engineering, Morris worked for 10 years with the National Air and Space Museum in Washington, D.C. While setting up an exhibit about B-17s, he met German ace pilot Major Werner Moelders.

“There is nothing more interesting,” says Morris with a smile, “than relationships between pilots who were once enemies.” 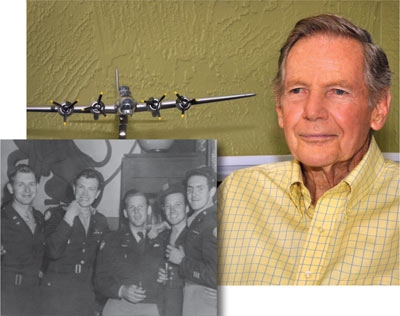 Gil Belair was a young U.S. Army officer in charge of training infantry replacements in the fall of 1943 when he looked up and saw a plane flying overhead. He decided that being a pilot was the way he wanted to spend the remainder of the war.

“The C.O. [commanding officer] wasn’t happy about it,” recalls Belair, “but he let me transfer to the Air Corps.”

After flight school, he was given a choice of flying a single-engine or a multi-engine aircraft. He chose the B-17, and not just because he considered the airplane a joy to fly.

“I had played a lot of team sports,” he says. “I figured having nine other guys in the plane with me would be neat.”

After picking up his first crew in Savannah in 1944, Belair experienced the worst flight of his B-17 career when a bad storm rolled in as he was flying to England. The radio and navigational aids went out over the Atlantic just as the aircraft hit a
huge downdraft.

“We lost 750 feet in a couple of seconds,” he remembers. “My navigator and I looked at each other and said, ‘After that experience, the war will be nothing.’”

Indeed his missions were somewhat uneventful.

Although he knows that he and his crew were lucky to have all come home safely while others weren’t, Belair says that a casualty rate of 60 to 70 planes on a mission wasn’t unusual. He remembers that Britain’s Winston Churchill wanted President Roosevelt to stop daylight bombings because of the horrific losses.

“If the media had been in 1944 what it is now,” Belair believes, “the public outcry to stop the daylight bombings would have been tremendous.” 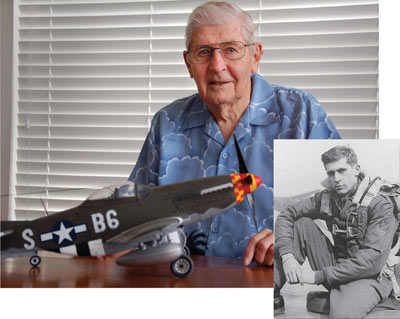 “We Had To Fly Sideways”

If it hadn’t been for pilots like Linwood Smith, many B-17 crews might not have made it home. He was a P-51 Mustang fighter pilot whose job was to protect the heavy-laden bombers from being shot down by the German pilots.

Fighter planes could fly at nearly 400 miles an hour, while the B-17s lumbered along at 150 to 200 miles an hour. The P-51 Mustangs were quick, but they could be easily mistaken for German planes by B-17 crews who fired first and asked questions later.

The tricky part, Smith explains, was finding a particular B-17 squadron at 25,000 feet that he was assigned to escort. He had to get close enough to a bomber to see its numbers without getting shot down himself.

“We had to fly sideways so that B-17 gunners could see the U.S. emblem on our wings,” recalls Smith, who showed how it was done with a small scale replica of a P-51 that he keeps in his den.

Although the P-51 pilots flew alone inside their own planes, they were part of a 20-man squadron, and those pilots became as close to each other as B-17 crews did.

“If one guy didn’t come back,” says Smith, “it was a serious event.” 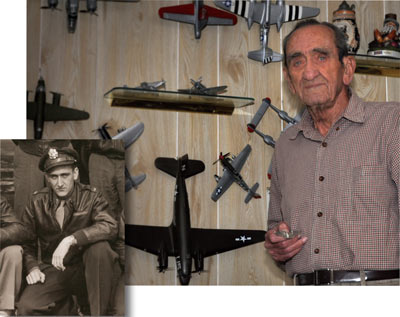 The B-17 was his favorite, and Reichert flew 35 missions in a Flying Fortress between 1943 and 1945. His friend Rick Morris calls Reichert the real 8th Air Force veteran among the small group of B-17 alumni who meet monthly in The Villages.

“He saw much more of the war than the rest of us did,” says Morris.

Reichert’s eyes light up as he tells how he had to set down his B-17 in a hay field in Belgium when it was low on fuel after a bombing mission.

“We could hear the artillery fire in the distance,” he recalls. “When a motorcycle rider came by, we asked him to go to the Allies in Brussels and get help, but he said he didn’t have enough gas.”

The resourceful crew emptied the last remaining drops of fuel from the aircraft into the motorcycle.

“We gave him a high-octane push,” Reichert says with a laugh.

Reichert’s entire crew made it back safely, not only from Brussels but also from the war.

“When you think about it,” he says, “that’s really quite remarkable.” 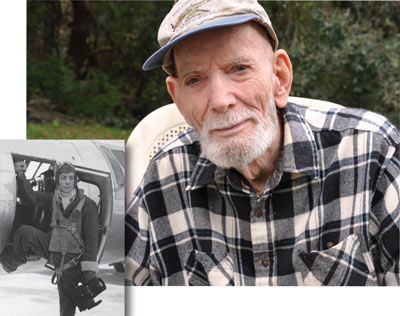 “We Had Two Engines Go Out”

As an aerial photographer with the 8th Army Air Force Bombardment Division, Patrick O’Keef was usually the 11th man aboard the B-17s, but he had to be ready to take over any position if one of the regular crew members was hurt.

“Sometimes I’d have to lay the camera down and take up the gunnery position,” says O’Keef, who was a qualified flight engineer for turret gunner. “I was the handyman.”

He served with many different B-17 crews, but his favorite was the “Wolf Wagon.” He recalls that the captain was terrific, but his fondest memories are the times spent with the young, single crew members who had only one concern when they were on a mission.

“We worried that we wouldn’t get back to base in time to catch the last train to London,” says O’Keef with a wink. “We would ride the train a couple of hours just to go out in the city.”

Several of his missions were death-defying, especially one where the pilot had to ditch the Flying Fortress into the English Channel.

“We had two engines go out on a return bomb run,” O’Keef remembers. “Our pilot put that Flying Fortress into the water as gently as a feather.”