If the name Shane Wooten sounds familiar, it’s for good reason. In addition to putting on high-energy live performances around Ocala and the state, this homegrown country music singer has a loyal online following thanks to social networking sites like Facebook and Twitter. Ocala Style decided to catch up with the busy 32-year-old to talk about music, working with The Bellamy Brothers, and the signature high-kick in his concerts. No wonder so many folks are fans. 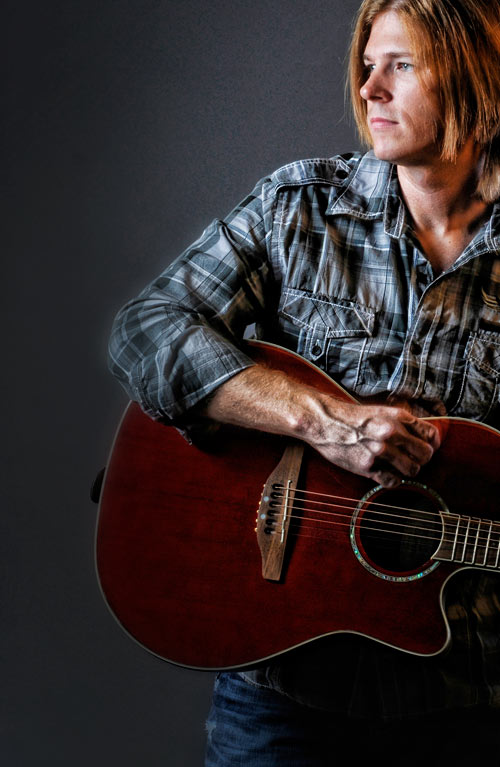 Yeah, getting started in any music genre today, if you don’t have any marketing behind you, you’re dead in the water. A guy has to go out and basically create his own band, get his own fan base, and take that package to a record label. It’s almost like a small company being bought out by a larger corporation.

Your sound is country but there’s a little bit of Buffett in there, too.

I grew up on Buffett. I was also a big fan of Jim Croce and James Taylor. Some songs you’ll hear, like “More Behind the Picture,” I used some Croce style on that, things I learned singing “Operator” as a kid. I used to sing that one all the time.

I have this image of you as the proverbial kid singing into a hairbrush. Is that accurate?

I sang a lot. I was kind of the ham, always trying to get someone’s attention.

Well, you have done some acting. Is that something you want to pursue, too?

It doesn’t matter to us if we’re singing or songwriting or acting. I used to act the fool a lot in school and that got me into a lot of trouble. [laughs]

Where did you graduate from?

OK, singing and acting, but can you dance?

Don’t ask my wife. She’ll tell you no. I do throw a lot of karate stuff into my show. We have a signature move [where] I jump up in the air and do a kick. I haven’t pulled a hammy yet.

Tell me about “Shovel’n Sunshine.”

The story of “Shovel’n Sunshine” is my wife, who owns a daycare, has a food service guy who sells her food every week. I got to know this guy, and he was like, “I wrote a song. I used to live in Nashville, and I wrote with a record label for a while.” He breaks it out and we start listening to it. I sang the song live a few times and people really responded to it. It really had that good Florida vibe going with it. We went into the studio, cut it, put it out, and people just loved it. At one point, two summers ago, we were getting up to 1,500 plays a month.

You also have a local radio show, Florida Country Buzz With Shane Wooten, on WTRS, and that’s how you connected with the Bellamy Brothers. Tell me about that.

The first phone call I make is to the Bellamy Brothers’ record label. I say, “Hey, I’m doing a show. I want to have the Bellamys on.” A few weeks go by and we work out an interview. I called Howard [Bellamy] and we just start talking. He’s the nicest guy. That was the first radio interview I’d ever done. He was like, “I like you. If you’ve got any questions about the music side, give me a call. I’d be willing to help you out.” We just kept that relationship going. They asked me about something pertaining to a business situation, with my [business] degree background, to give some feedback on. Later, I went down [to their house] for another meeting and David [Bellamy] said, “I’ve got this song that we had on our album Sons of the Beaches called ‘Pit Bulls and Chainsaws.’ I think it fits you, man. You gotta check it out.” So I listened to it, went back down, and recorded it with them. It was a surreal experience.

I bet! Now you played BFE downtown in August. Where else have you performed locally?

We did the old Tin Cup. We played Midnight Rodeo. I’d say the most fun we’ve had at a club in Ocala is BFE.

Who’s someone you listen to on your iPod that might surprise your fans?

I like to listen to Jay-Z. I listen to old David Lee Roth stuff. “Jump” was actually one of my favorite songs growing up. That’s kind of where I got the idea to do the kick on stage.

So if you could go back in time to see one concert, who would it be?

Probably Guns N’ Roses and Mötley Crüe when they were on tour together. That would have been a great one.

I agree. So what’s your long-term goal, Shane?

We can only hope that we keep rockin’.

Wooten Worldwide
Follow the Shane Wooten Band online. All the kids are doing it!

True to form, Wooten had the video camera rolling during his photo shoot for this article and for the ensuing hour-long interview at the Ocala Style office. Go to ocalastyle.com to check out the hilarious webisode he created from the footage.