Know this about Byron Kerns: The wilderness is his natural habitat.

Kerns, a former U.S. Air Force survival instructor, is happiest when taking the path less traveled and content to use a machete to hack through thick underbrush. He can build what he describes as a “knee-high fire in the pouring rain” without matches faster than you can order delivery pizza. And while you’re eating a cheese-laden slice, Kerns will dine on a field-dressed rabbit he cooked on a spit over that fire. Or he might even be eating the most readily available source of protein in the wild—bugs, six legs or less. 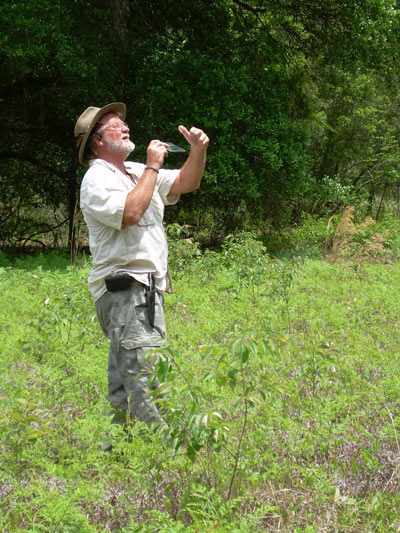 The best part is that Kerns can teach you to feel at home in the wilderness, too. Maybe even how to be OK with eating bugs. But if you’re getting images of Survivor, stop. Based in Weirsdale with the Ocala National Forest practically in his backyard, Kerns is focused on the reality of wilderness survival, not the made-for-TV version.

“Reality shows like Survivor distort what wilderness survival is all about,” says Kerns, an imposing, yet gentle man who wears a sheathed 18-inch machete strapped to his hip. “I get calls all the time from people who want me to show them how to survive with just a knife and water. I tell them that’s foolhardy and it’s not what I do.”

What Kerns preaches and teaches is respect for the wilderness and how to enjoy it safely. Growing up in Indiana, Kerns says he was “always out playing in the woods” and he never even heard the term wilderness survival training until he joined the U.S. Air Force during the late Vietnam War era. But all that time out in the woods as a kid served him well, and Kerns found his passion as a wilderness survival instructor. Over the past four decades, Kerns has trained military pilots and Navy SEALS all over the world in some of the most challenging conditions. In the private sector, his clientele have included corporate CEOs, doctors, lawyers, teachers, Boy Scouts, Girl Scouts and even families. 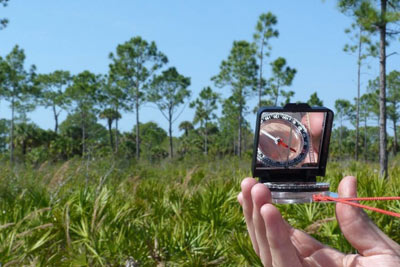 As fate would have it, Kerns even met his wife Francine and subsequently moved to Florida thanks to his excellent reputation as a wilderness survival instructor.

“I was living in Virginia at the time where I had a survival school,” recalls Kerns, “and I got a call from this woman in Florida. She was an ER nurse and did horseback trail riding, mainly in the Ocala National Forest. She was looking for someone who could teach wilderness survival for horseback riders. She had done some research on the Internet and kept reading about me in articles.” 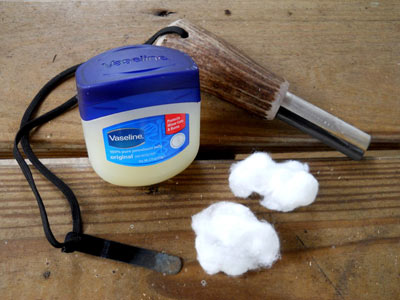 An honest man, Kerns admitted he not only didn’t know about that specific kind of survival training but had never even ridden a horse. But he was willing to work with the woman and come up with a plan that could be adapted to wilderness horseback riding. By the time the project was done, Kerns and Francine had become good friends. Soon after, Kerns came to Florida for a visit and the friendship grew into something special. Kerns sold his Virginia survival school in 2005, moved to Weirsdale, and he and Francine were married in 2007.

When Francine isn’t working in the Leesburg Regional Hospital ER, she’s often right next to Kerns during a survival training course. Kerns points out that “Francine’s great spirit and medical training are invaluable.” On their Tahavadream Ranch, they have three horses, two dogs and an alligator in the pond. And, yes, Kerns did learn how to ride horses.

™People want to go out into the woods for all kinds of reasons,” says Kerns, who conducts a wide variety of survival courses in Florida, Georgia and Virginia. “They want to enjoy the wild but lack confidence or are afraid. Others want to challenge themselves beyond their comfort zone.”

Whatever the reasons, Kerns has a course to suit just about everyone’s need for the wild. From the family-focused Safe Return to appropriately named and practically self-explanatory Hocus Pocus, Bare Bones and Wicked Thunder courses for adults 18 and up. The latter three involve challenges such as limited rations (800 calories a day in Wicked Thunder) and minimal equipment, setting up multiple camps, human camouflage and evasion techniques while being pursued by aggressors on foot and horseback. And this will get your attention: In the Hocus Pocus summary, capture and interrogation could occur.

“Safe Return is an excellent course for parents and their kids to take,” says Kerns. “It’s a great way for family members to learn team work, and it builds a strong bond. Plus it’s an experience everyone will share and never forget.”

But no matter the course, all are based on Kerns’ 7 Survival Priorities—positive mental attitude (PMA), wilderness first aid training, shelter building, fire making, signaling, water and food. There’s also the Rules of Three to keep in mind: You can go three minutes without air, three days without water and three weeks without food.

“Positive mental attitude is my number one priority because our brain is our best survival tool,” explains Kerns in his calm, matter-of-fact manner. “When you’re headed into the wilderness, you need to be prepared and think ahead in the ‘what-if’ mindset. What if it rains? What if I sprain my ankle? What if I get stung by a bee? What if I get separated from my group?”

Kerns adds that “combined with good training, PMA allows you to make good decisions about what to do in the wilderness under any survival situation.” And if you’re going to spend any time in the woods, Kerns stresses that “it is essential to learn the second survival priority, wilderness first aid.”

What Kerns carries in his backpack is always evolving and differs depending on the situation he’s going into. But on this day when Kerns empties his backpack, weighing a light 30 pounds by his standards, there are items to handle each entry on his survival priorities list. To build a shelter, there’s 30 feet of forest green parachute cord, a large roll of heavy-duty white plastic and four metal stakes. Water bottles and canteens, plus purification tablets, liquids and even a pocket-sized ionizer. For food, bags of homemade granola. A large orange plastic bag with a face hole for a simple rain poncho. Of course, a first aid kit. A big role of duct tape, because even in the wilderness, good ol’ duct tape can come in handy. A notepad and pencil, not for journaling as much as for leaving a note should you have to leave a location. A bag of cotton balls and a jar of petroleum jelly, a surprising explanation to come. And additionally, besides that aforementioned machete, Kerns carries a hunting knife on his belt, a mirror in a back pocket and a whistle in a front pocket, the latter two for signaling his location.

“Everything you put in your backpack should be for a reason,” says Kerns. “And it should be put there in anticipation of what might happen so you can stay safe.”

Remember making that knee-high fire in a pouring rain?

Kerns takes four items from his backpack—a medium-sized flat rock, a chunk of pine tree trunk, a knife and a flint fire starter—and then proceeds to give a lesson in fire starting 101. With the knife, he shaves pine tree chunk slivers, which are a natural source of turpentine, onto the flat rock. Then, he strikes it with the flint fire starter, and, voila, let there be fire!

“The thing about making a fire is that it’s important to carry in the tinder to start the fire,” says Kerns. “You can always find kindling to build the fire with, but if you can’t start one, that won’t do you much good.”

Despite all his decades of wilderness survival experience, Kerns still considers himself a student and not an expert. He always looks and listens for teachable moments, from nature and his students.

“When I came to Florida, it was a great learning experience,” says Kerns in genuine humility. “I had to learn about the terrain, the new fauna and flora. I had never been around alligators. I learned how really important shade and water are here. I have a tremendous respect for the wilds of Florida.”

Many of Kerns’ courses take place in different areas of the Ocala National Forest, a vast and varied wilderness classroom. Another nearby location often utilized is the Sunnyhill Restoration Area, a favorite for the Safe Return course. In Virginia and Georgia, Kerns has permits for national forests and parks in those states. He also does private courses for individuals and groups at requested locations.

“I have a passion to share what I know and what I’m learning about wilderness survival training,” says Kerns, smiling. “I consider myself fortunate to have received that special knowledge, and I feel like it’s my duty to pass it on. I want people to enjoy the wilderness and stay safe.”

Even if it means eating bugs, six legs or less.

Byron Kerns will be featured on the TV show how to Do florida on June 11 and 12. Check howtodoflorida.com for stations and specific times.