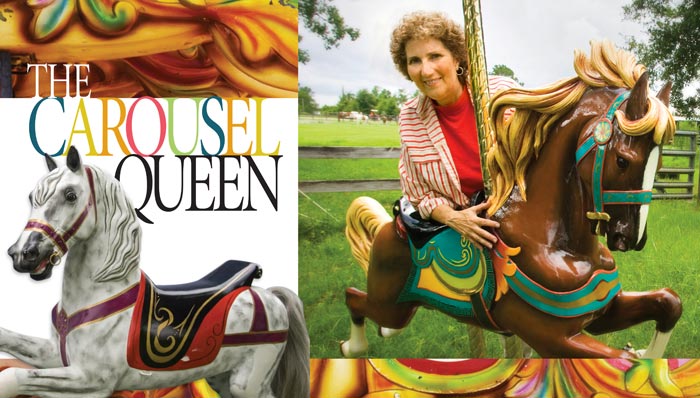 Before World War II, amusement parks at the end of railway lines were commonplace, partic-ularly near a beach or lake. The highlight was often a massive merry-go-round with colorfully painted horses, as well as other animals and mythical creatures. If you close your eyes and imagine, you can almost hear the carousel music tinkling and the sound of children giggling.

“People didn’t have cars back then,” says Marsha Schloesser, owner of the Carousel Workshop in DeLand. “More often than not, families stayed in town for entertainment or traveled by train to the parks.”

Once the war ended, families began purchasing automobiles, allowing travel to a variety of destinations.

“Because of this, amusement parks started to die out,” Marsha explains.

As a child, Marsha always had a special place in her heart for carousels. 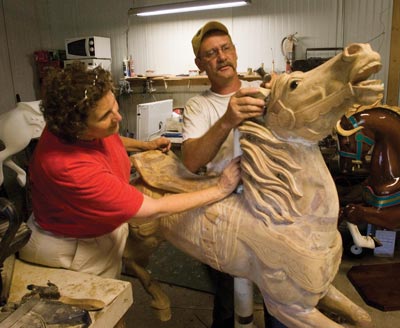 Marsha Schloesser works with Mickey Hall on restoring a carousel horse in her workshop.

“My grandfather worked at Coney Island and he used to get us on the rides for free,” she recalls. “Way back then, when the carousel animals stopped working properly they would throw them out. I remember my grandfather saying he could get me one. My parents said no.”

Marsha jokes that the incident was the beginning of her fascination with the creatures. Now known as ”The Carousel Lady,” Marsha’s home and workshop are filled with an assortment of carousel horses and animals in a variety of states of decay. Her passion? Restoring the carousel pieces, especially the horses, to their former glory. Whether working for a private collector, a large corporation, or a small museum, Marsha’s attention to detail during the painstaking refurbishing process has made her a well-known name in the world of carousel horses.

“This is a horse-crazy artist’s dream,” Marsha says. “It’s everything I love to do.It combines horses, color, and art.”

A fashion designer for 21 years in New York City’s Garment District, Marsha began her foray into all things horse by opening a boutique that specialized in equine memorabilia.

“Someone brought in an old carousel horse to be restored and that was it,” she says. “I fell in love with the horses, and I’ve been doing it for the past 25 years.”

Originally, Marsha did the time-consuming work out of her home, but the Carousel Workshop has grown so much in the last quarter century that the need arose to build a separate workshop and art studio. Luckily for Marsha, she met woodworker Mickey Hall. After helping construct the now four-year-old studio, he became a permanent fixture and currently helps Marsha with restoration and re-creation tasks.

“This is very creative work for me,” Mickey says, “and I really enjoy it. Most of my work is done by hand, typically with chisels and sanders. A repair job on a horse can take upwards of one month on my end.”

Mickey admits that the task is most difficult when the horse comes to the workshop in pieces.

“When it’s a pile of wood and I have to put it back together, it can be challenging,” he says. “It’s also hard to cut away old or damaged wood from the horses. I often feel like I’m throwing away a piece of history and replacing it with brand new materials.”

Preserving the history of each piece is important to both artisans. Currently, the duo is working on the restoration of a coin-operated horse from the 1930s, as well as the replacement of one horse’s ears after the current owner discovered they had been refurbished incorrectly. Marsha and Mickey have even worked on horses that date back to the 1800s.

“We use old pictures and books as points of reference when restoring the horses,” Marsha says. “We intend to make it as historically accurate as possible.”

Of course, like any artistic work, Marsha does exercise creative license when putting the finishing touches on her carousel creations.

Walking into Marsha’s art studio is a gift to the senses. Although it’s right next to the workshop, the studio is removed from the sound of sanders, chisels, and table saws and filled instead with the smell of paint and turpentine. Colorful paint splatters dot the floor, classical music echoes throughout the space, and a collection of horses in the process of being painted stand proudly, demanding attention and scrutiny.

“This is where I bring the horses to life,” she says. “It’s wonderful to have my studio right outside of my home. I spend a lot of time here. If inspiration strikes at 1am, I can come down in my pajamas and paint. It works for me.”

In her studio, Marsha’s personal taste, as well as that of her clients, is the boss. Creativity wasn’t always paramount when these carousel animals were first created.

“When the horses and animals were painted in the factory, they were done for parks and not individuals,” she says. “Often, what determined the color scheme is what paint was on sale at the time. It’s just like fashion. It was also about what colors were popular or easily produced back then, too.”

Today, the colors and options for Marsha are endless.

“I tend to go with my gut if a client doesn’t give me specific direction,” she says. “I also like to embellish the horses with gold, silver, and copper leafing, and rhinestones.”

For Marsha, the size of the project doesn’t matter—she pours her heart and soul into each animal. Her horses can be found in museums across the state, and she was the first artist to have her work selected by a sponsor for Ocala’s Horse Fever project. Like most artists, she has her favorites.

“The Dentzel Arabian Standard looks just like a living, breathing horse,” she says. “To me, it’s the most beautiful carousel horse ever made. I was lucky enough to recently complete two, a mare and a stallion, for a private collector.”

Now 25 years into her career, Marsha remains as passionate as ever about her work.

“It’s a modest lifestyle,” she says. “We don’t do it for the money. We do it because we love and have an appreciation for the animals.”